The United Church: the NDP at prayer 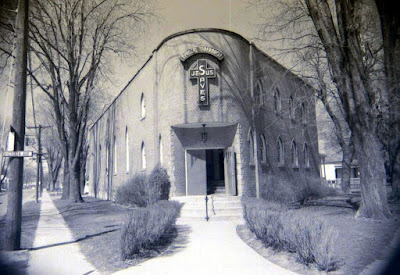 Since going on Facebook, I keep finding old Chatham pictures/names of people, places and things, and it just jolts me because I have not thought of these since I left there in 1969. I found a very good pic of Evangel Tabernacle, which was across from us on Victoria Ave. Seeing it again gave me a weird mixture of wonder and heebie-jeebies. I used to hang off the bar at the front door and pretend I was riding a horse (?). An upside-down horse, I guess. I must have been very young.

When I was growing up, we just knew without being told that Evangel Tabernacle was somehow unmentionable. For all we knew, "negroes" went to it (though I never did find out). The Catholics who went to Blessed Sacrament in their short-pleated-skirt uniforms were similarly unmentionable. For years and years, I didn't even know what a Catholic was, but we all knew enough to stay away from them. 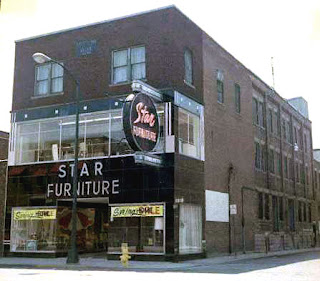 I grew up in the United Church, and until Russell Horsburgh blew it all apart for us in the mid-'60s, we weren't much more exciting than the Methodists and Presbyterians who had melded together in the 1920s to form us. Though Horsburgh poisoned the well pretty quickly, the waters were muddied by the fact that he wanted to welcome black families into the congregation. This caused great consternation from the get-go. It was seen as one more stroke against him - that, and the fact he was homosexual (which was obvious, because he was in his 30s and not married).

This takes nothing away from the more repellent and abusive aspects of his ministry, which eventually imploded because there was just too much evidence against him. But the people asked to testify in court were kids who had been under his power, and no doubt the good reverend had spoken with them and asked them to please shut up. Though he was eventually convicted and served a few months in jail, the whole thing was overturned when somebody carelessly set a match to his files. And back then, the thought that a minister would do something like that was simply unthinkable: he was a man of God, for Christ's sake!  He threatened to make a triumphal, I-told-you-so return to Park Street United, but I doubt if he followed up on it. It was just an idle threat, yet another way to lick the blood and feathers off his lips after his victory. 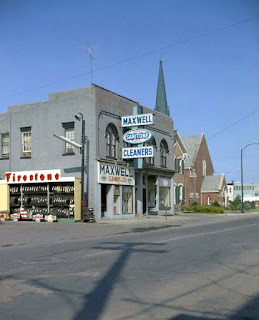 There was a horrible echo of the Horsburgh affair towards the end of my more recent attendance in the United Church.  In a very short space of time, our new minister had turned our formerly-reasonably-functional church into a war zone. The congregation splintered into viciously adversarial factions, and as far as I am concerned it never recovered. He was ousted in less than a year by the larger church, but he left scorched earth in his wake. I now wonder why I put myself through all that. Every trauma I ever experienced as a child at Park Street United returned to haunt me and make me sick. But trauma survivors suffer from an awful sort of extreme loyalty that is difficult to break away from. It's hard to understand unless you're one of them. 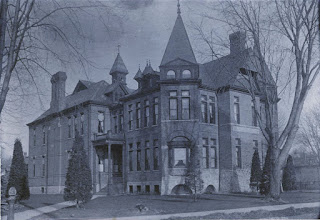 I didn't storm out of the place, but became gradually disaffected over a period of several years as "worship" became more and more an empty, even boring experience. I knew enough not to speak of it, or I would be asked to solve the problem and make it more interesting. Having survived the storm, no one wanted to rock the boat, and I think unhappy people were just keeping their mouths shut.

All this aside, it is repellent to me what has happened to the United Church in recent years. It is now not much more than a group of left-wing atheists. It has been called “the NDP at prayer”, but it’s worse than that now, it’s “we-think” of the lowest order, dispensing with any kind of theological emphasis. I wonder what they do at services now. I suppose they have the same old ladies doing bake sales, but eventually they will all die off. I remember a friend of mine saying “we have some young women in the UCW now”, but they were all in their 40s and 50s.

It’s that fustiness, and the hymns, my God, why do people bother going? It’s all hypocritical, as if anyone cares about Jesus or God any more. Even the more recent moderators say you don’t have to believe in God, but back when I was trying for re-entry in 1991, they wouldn’t even let me in without a refresher course. I had to be re-confirmed before I could be a member again because (they said) too many years had gone by since I had attended. 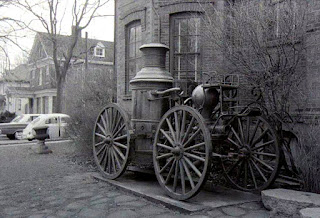 My parents were incensed with this (I had to phone them to get my baptismal and confirmation records, which they - incredibly - had saved), because they had been told that if I was baptised as an infant in the United Church, I would be a member for life. But the church now required those documents, or I would not be allowed back in. I was re-confirmed after taking an eight-week course, writing a personal creed and passing a fairly rigorous interview by the minister, but - wait, there's more - I also had to go through a kind of formal re-entry during a service, with three "real" members laying their hands on me.

Why was it important to be a member, and not just an "adherent" who was allowed to attend without formal membership? Well, you had to be a member to be able to vote at the annual meeting, that yearly four hours of dire financial prognostications. You'd leave three inches shorter than when you came in. But at every annual meeting, the membership rule seemed to be waived and anyone who had attended could vote. This was due mainly to low turnout. 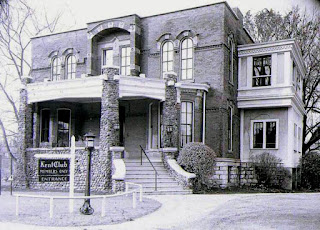 This seems extreme now, and with the church hemorrhaging numbers every year (though, not so strangely, some claim that it's not true and they're doing just fine if you adjust for NDP membership), they would probably let just about anyone in by now. Certainly, you no longer have to believe in God any more because the moderator clearly doesn't.

At last count they were down to 400,000 – less now, probably, and will die off naturally because no one wants to wear orange to the service every week. If people do join, they are expected to take on a ready-made, left-wing political agenda, though of course this will be strenuously denied. How can you think that? Of course you can believe anything you want! How can you accuse us of that kind of oppression? What's wrong with you, anyway? If you're not happy here, you can always go worship at that fundamentalist church down the street. You know, that brick building on Victoria Avenue that says JESUS SAVES on the front.

Posted by Margaret Gunning at 1:14 PM No comments: