Why, why,why, you may ask yourselves,WHY didn't these brilliantly innovative inventions catch on? Why do we not see them today as we stroll down the street? Why must they be consigned to the dusty halls of Pinterest? It is difficult to imagine why the Turkey Wagon didn't catch on. Keeping two turkeys is so much cheaper than a pony, though their sense of direction might be erratic. Are these sound amplification devices? Small strap-on mobile cannons? Some bizarre sort of plumbing system involving attaching people's heads together? Or merely a strange precursor to the Mickey Mouse Club? 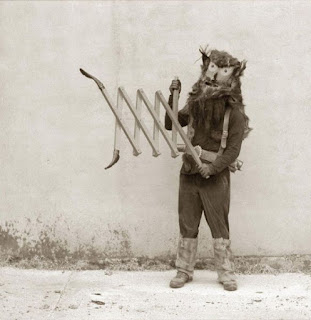 The whole trouble with Pinterest and all those Top Ten Most Horrible sites is that they don't give you any background, and if they do it's either wrong or just a wild-ass guess. So I might as well make my own wild-ass guess and say this is a bottom-pincher which can stretch out to a full capacity of twelve miles. The figure operating it is a pervert. 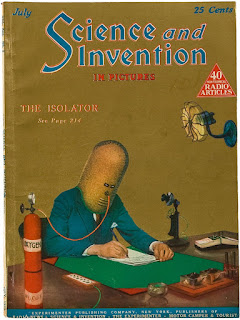 The Isolator, The Isolator! I found so many pictures of The Isolator, and I still do not know what The Isolator is or might have been. Looks like something Michael Jackson might have used, or perhaps the end of a giant twinkie. A tank of some unknown gas, purported to be oxygen, rests on the desk. 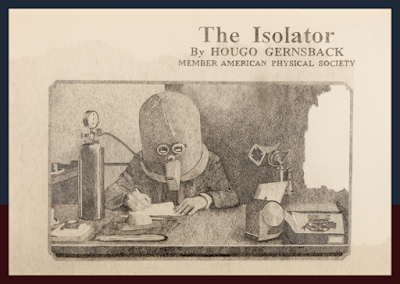 This is beautiful, even though I do not understand it. I don't know if this was an experimental prototype, or if Isolators roamed the streets back in the 1920s. 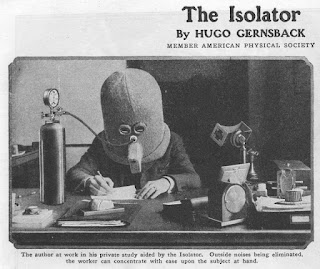 This would, in fact, be very isolating. Small children might run screaming. I am trying to figure out what all those gizmos are on Hugo's desk. Perhaps they are merely props to make all this look terribly scientific and distract you from the fact that this headgear is bloody useless. 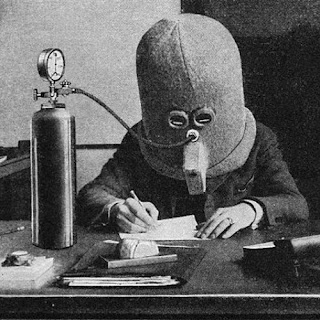 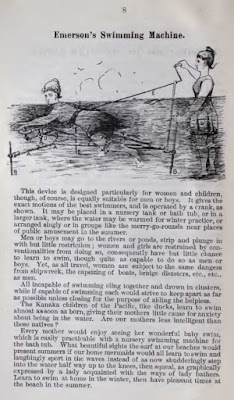 This woman is encased in something called the Swimming Machine. She appears to be strapped or perhaps bolted in, while her girl friend cranks the crank that makes the something-or-other, the contraption, the Swimming Machine, force her arms and legs into gyrations approximating swimming. I like this, but I don't like to think what might happen when the tide comes in. 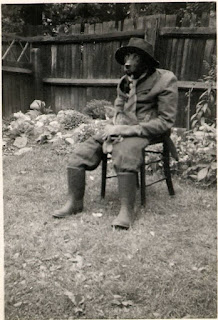 This is the precursor to those bloody videos where a dog is supposed to be eating dinner, and you know it's all faked because a dog NEVER does that with a fork and spoon. This dog seems to be holding a rifle. 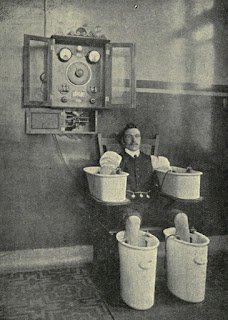 That square thing at the top, first of all, has a face. Are you one of these people who sees faces in everything? It's a malevolent being with dials for eyes and a pressure-gauge for a nose, and like the gas meters of my childhood it terrifies me. The guy is boiling his feet off for reasons we don't know, or trying to keep busy or keep his hands off himself, and his feet off himself too. Victorians. 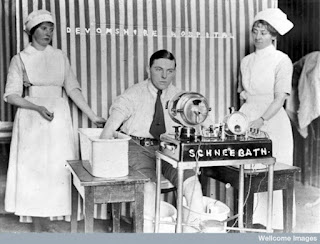 This is even better. It's the Schnee Bath, in which a man bathes his Schnee while two fetching nurses look on. The fact he needs two medical attendants while undergoing the Schnee Bath is alarming. Wires appear to be running from that ominous-looking box straight into the buckets of bath water. This guy's going to do a Thomas Merton any time, and they'll have to peel him off the ceiling. 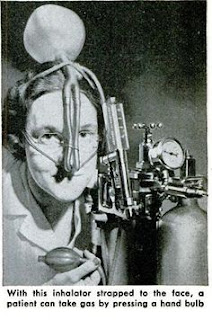 Look carefully at the blobby thing on top of the woman's head. It's the back view of an alien, with its long skinny arms and legs wrapped around her face. It is eating her brain, but she has not noticed it yet because she is high on the fumes from the fire extinguisher. 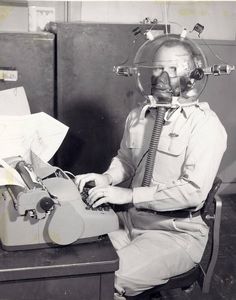 If I had to work at a typewriter again, I think I'd wear one of these so I could scream as loud as I could and no one would hear me. If things got really bad, I could mentally control the various weapons appending from the helmet. I could fire death-rays at someone. The long tube coming out of the fellow's mouth is a vacuum cleaner hose. He's having a conversation with his buddy in the next room. My brother and I used to do that all the time, and also roll marbles and send the hamster on a little journey. 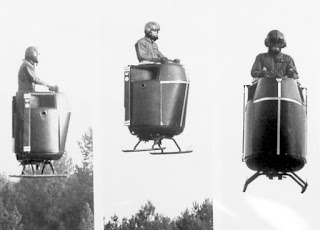 This is trick photography. This thing actually sits on the ground and does nothing. 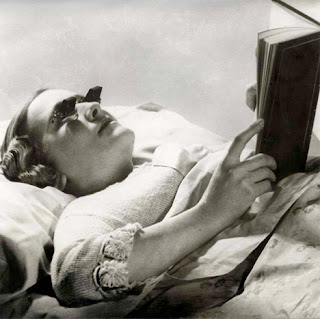 Who needs eyeballs, when you can have implants? These fit neatly in each eye socket and completely eliminate the use of the eye. Think they're not attractive? Guess again. Available in a variety of styles and colours, 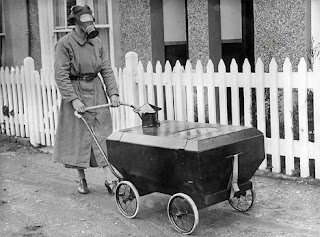 Ice cream wagon? No. Portable oven? Hmm. The woman is wearing a gas mask, and there's this little vent-ish looking thing - . No. There could not be a baby in there. 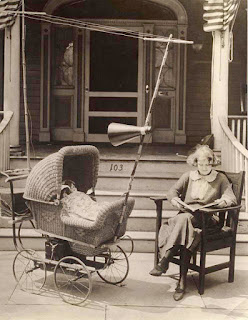 This is one of the more unfortunate artifacts from Nazi Germany, in which infants were indoctrinated with piped-in speeches by Adolf Hitler before they could crawl. The comely Fraulein is reading Mein Kampf, also adapted into a child's first reader (Fun with Adolf and Eva). 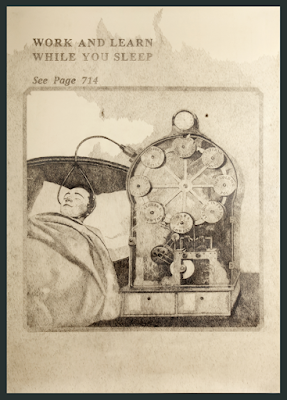 This is obviously something that turns, right? Turns around? In a circle? Then why is the guy's head plugged into it the way it is? His head would be wrapped around this thing in about two seconds and he would be ground up into hamburger by all those gears at the bottom.  A learning device designed by Hieronymus Bosch, probably meant to punish sinners.