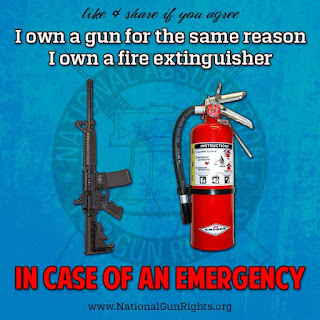 This hateful meme showed up on my news feed, posted by someone I thought I knew. Not quite as bad as the Tea Party Republican I had to cut loose, in spite of the fact she was cozied up to the Lloyd family (though she cut all ties with me for no reason that was ever explained). Her meme stated that the wrong Democrat had been assassinated: it shouldn't have been JFK (which was a waste of a good bullet), but Obama.

It's been stated that mass shootings wouldn't happen if everyone in the United States was armed at all times. THEY could kill THEM first, solving the problem. We have no such problems in Canada, but we do have despair. There are guns, but mostly in the hands of gangs.

I have known, in my lifetime, two people with guns: a collector of antique rifles, and a cop. The gun didn't even belong to the cop.

I just don't see how this can work.

Posted by Margaret Gunning at 1:23 PM No comments:

It's lies, I tell you! Dirty, filthy lies! 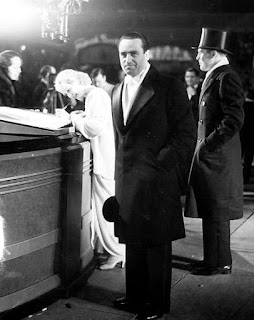 Sorry, I've just been in a Monty Python mood lately. It's the silly season, and I want to coast along and not put in the usual feverish effort that makes this blog so totally obscure, not to mention primitive to look at.

I found this lovely shot of HL, obviously a candid photo. I love the quality of light in it, sifting down as if some sun or moon dwells in the corner.  Someone is wearing a silk top hat, which is not something you saw every day even back then (likely in the  mid-1930s). Harold is wearing very fancy evening wear and, as usual, looks splendid in it (and as he said himself in his Nebraska-born way, "Well, some say I don't clean up too bad"). This was a  gentleman to the manor born, but what's he doing here? Who is the blonde, and why does Harold look just a tad guilty? 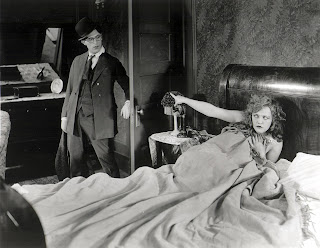 As you can see here, the private Harold looked very different from the Glass Character who propelled him to fame. He was better-looking, for one thing, with the clean Gregory Peck jawline that makes male movie stars so photogenic. He carried himself differently. He rocked a tux like no one else. But what's going on here - just the usual social whirl he was obliged to engage in (not always happily, as he was essentially a family man)? Then why does it look as if the attractive, willowly blonde, dressed to the nines, is signing a hotel register? Is it just too hazardous if HE signs it, even if it's Mr. and Mrs. Smith?  He might as well relax, because his fans won't recognize him anyway.

The faces in the background look vaguely familiar to me. Can you make them out? So could this just be one of those elegant Hollywood soirees that - no. Harold liked women, and he sort of liked them in bulk. Skimming through the photos, some of which I'd never seen, there were several of him as an older man photographing female nudes, his favorite of his many hobbies. Nudes, as in women decorously draped below the waist, but with mammoth breasts and considerable curves elsewhere. To his credit, Harold would not photograph a skinny woman and liked bodies that were not so much modelled on Monroe (whom he photographed, though clothed) as Jane Russell, practically exploding out of her Howard Hughes-designed bra. 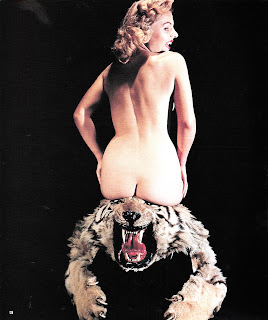 These photos of the photographer make me uneasy, for obvious reasons. Some of them are plain bizarre, with oddball props that make you wonder just what is going on. The family released a coffee table book a decade or so ago featuring the best of these nudes, so obviously they're not trying to hide anything. Some of them are in 3D, a technology which Harold may not have invented (that was Grandma's old Stereoscope that you held away from yourself like a selfie stick), but developed from its primitive William Castle roots to something that could  be seriously used in theatres. In an interview late in life, he claimed that in the future every movie would be shot and shown in 3D, and the interviewer made sure he mentioned in his writeup that Harold had gone a little crazy in his old age. 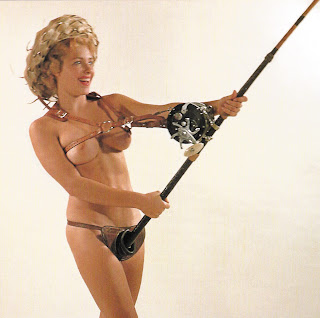 Now there is a Harold Lloyd Award for Excellence in 3D Photography. Martin Scorsese notably won it for - ironically - Hugo, where the main character dangles off the hands of a huge clock. Since he was a humble man, I think Harold would have been pleased by the respectful quote.

But getting back to it: Harold was human, but did absolutely nothing to attract women. They came to him. Flocked. It was wrong to say he chased them. He paid his models a flat fifty bucks, and the lineup ran around the corner of the block. There is a lot of evidence these bodaceously curvaceous women were quite willing to sneak into bed with the photographer. 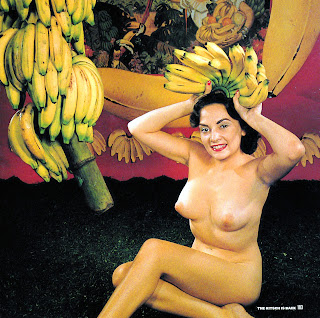 I read part of a disgusting book called The Secret Life of Humphrey Bogart. I forget who wrote it. I didn't buy it, folks, I read the "Look Inside!" excerpt on Amazon. It's one of the sleaziest things I've ever seen, so of course I had to read it (given my insatiable appetite for the tawdry). Pure fiction, so I should not pay any attention to the fact that there was a tell-all passage about Bebe Daniels, Harold's first leading lady in the 19-teens. She claimed that Harold was "proficient and good at" the sex act - well, my goodness! Hardly sweep-you-off-your-feet stuff, but BD then claimed she could expect to have at least three orgasms during these sessions. 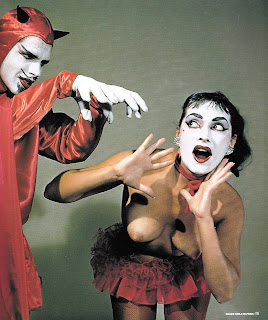 It's lies, I tell you - a pack of dirty, filthy lies! But with HL's Nebraskan' thoroughness and his propensity for studying every facet of life until he WAS good at it, it may well be true. "Good at" means "satisfaction guaranteed, Ma'am", among other things.

Or so my wicked imagination tells me. 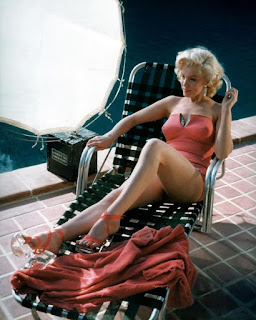