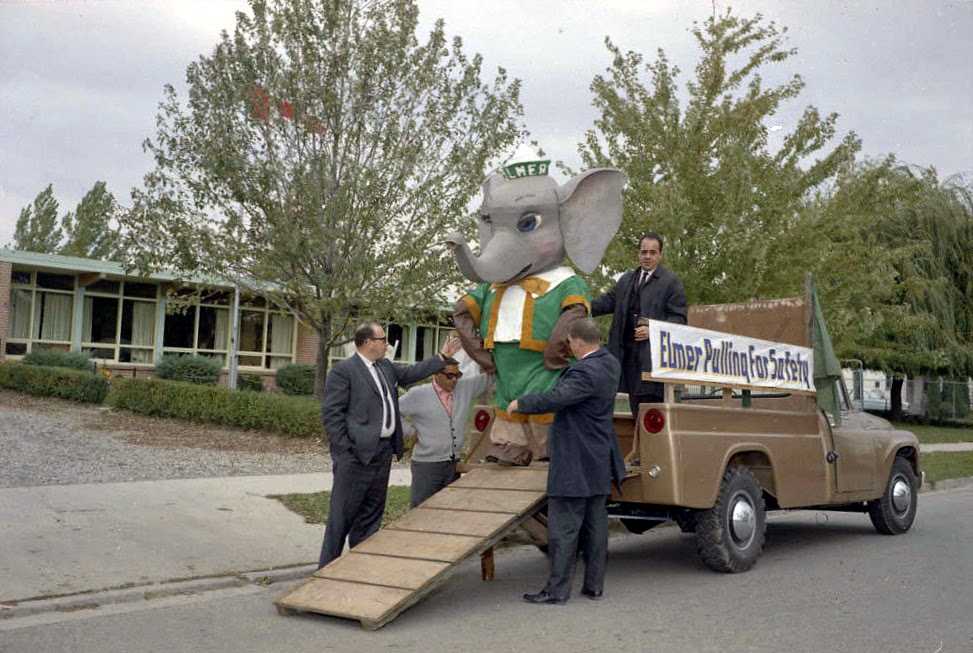 This was one of those late-night, treasure-trove finds that kind of made my head spin. It was a site of dozens and dozens of old (I mean OLD) photos of Kent County landmarks, especially schools in Chatham. I've already posted many pictures of McKeough School, a formidable-looking old brick building built in about 1906 that looks like something out of the Addams Family. But these shots were miraculous: it's Elmer the Safety Elephant! 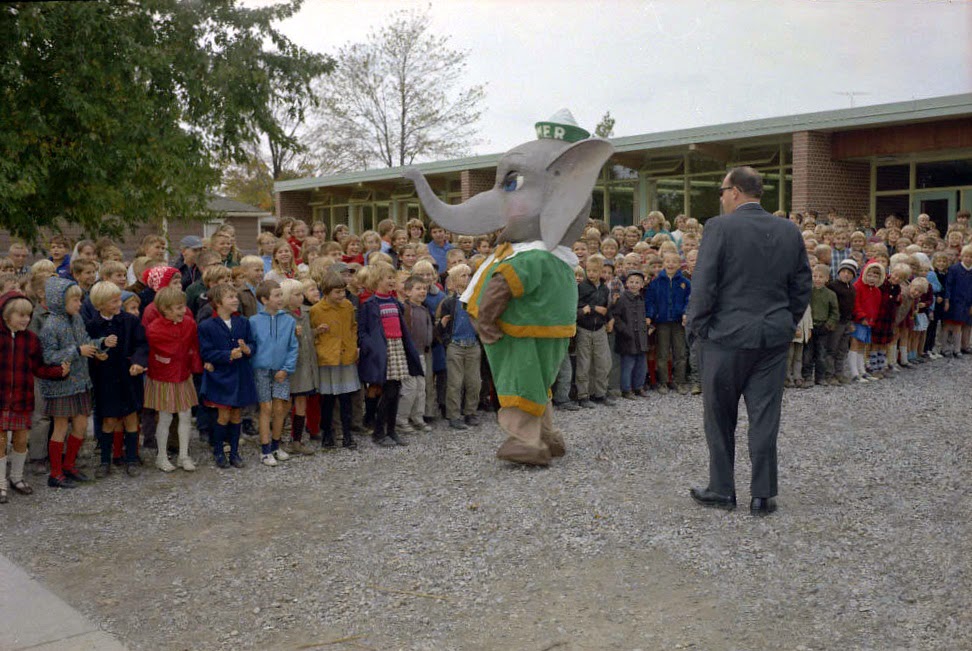 Us kids eagerly looked forward to Elmer's visit every year. We were admonished to learn the "seven safety rules" (and I can only remember a few: look both ways before you cross the street; keep out from between parked cars; always carry something white at night). Then there was the Elmer the Safety Elephant anthem (Safety First) which is starting to make all this sound like the Hitler Youth or something. "Here's what Elmer has to say/On the streets you do not play. . . " 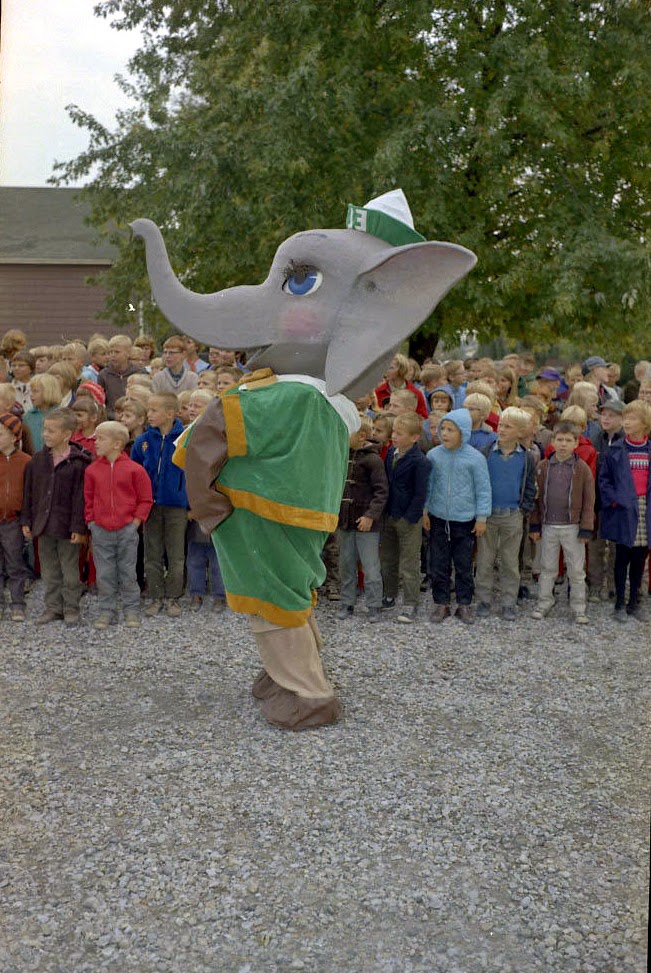 These photos were milky and bleary when I first uploaded them. They had the messy black border of an old Polaroid, the kind where you zip off a plastic cover with a sort of tar-like caustic substance on it. They were labelled with a white grease pencil. I decided to see if I could clean them up. I easily cropped them (and just now I realize that these are all scans, and would lose quality automatically), then hit the restore button. Oh boy! I was there again, one of those little tow-headed kids looking on in awe, standing in an exact straight line. Serried ranks. 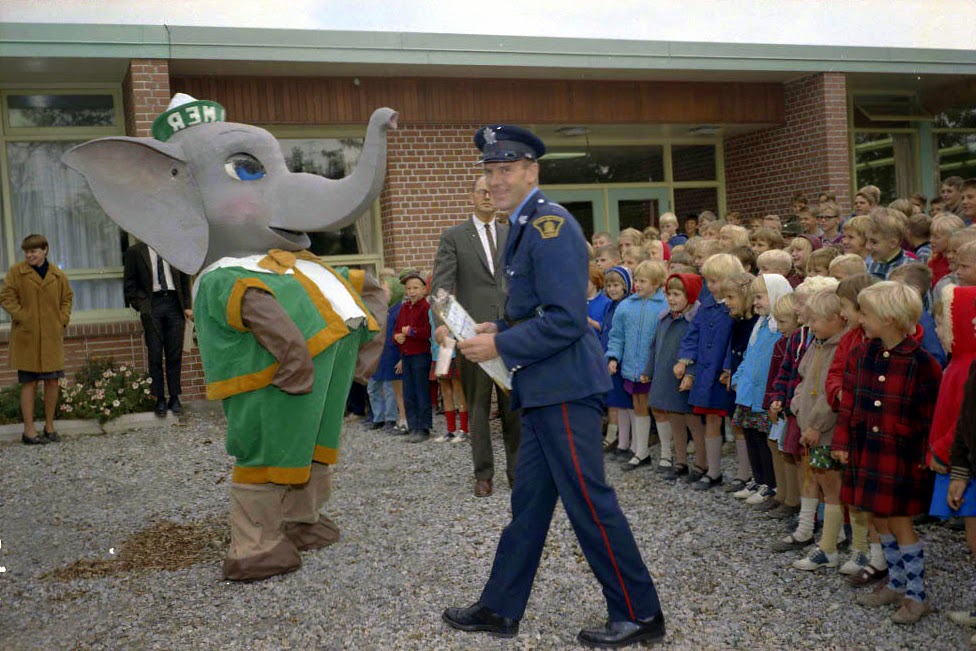 I realize now that Elmer has huge blue eyes with lashes, making me think he's more of an Elephantina or Elephette. I only remembered the vast trunk, and the ears (and there was an awful rumor going on in about Grade 6 that Elmer's ear fell off, a real emergency when he was on his way to a visitation with the kids. The whole thing sounds like an urban legend to me. 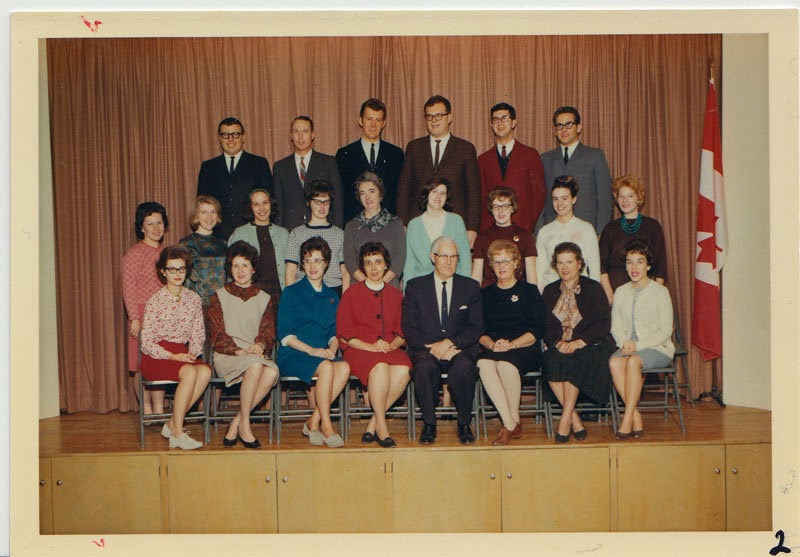 I believe this is my Grade 6 class from Queen Elizabeth II School, the second school I attended. I recognize several of the teachers. I was given a battery of tests, I swear I remember this, in kindergarten, and I even remember a couple of the questions. I was asked to count to a hundred, and though I dried up at 29, the helpful teacher asked, "So what comes after the 20s?" "30s." "And what comes after the 30s?" (etc.) I got them all right. Then I was given a photo of an open field. "You've lost your wallet in this field. How would you go about finding it?" I did a sort of mazelike pattern from the outside in, something I frankly stole from my brother, but it passed. 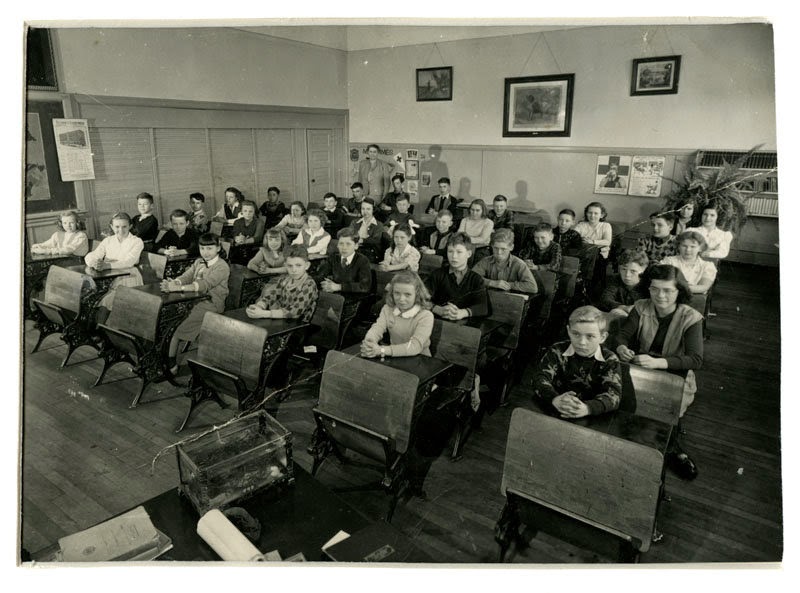 So I began to take two grades in one year. In kid parlance, I "skipped". I was being prepared for a special, elitist Grade 5, the "Major Work Class" at QEII. This was one of those infamous '60s experiments in education in which bright kids all learned at their own pace, with little or no curriculum.

I had walked to McKeough, and I will never forget that blissful 10 or 15 minutes, which now seems like paradise. Suddenly I had to commute, a very long bus ride all the way across town. I immortalized our hapless teacher, Mr. Service, in my second novel Mallory: we drove him to a nervous breakdown by mid-term, and he had to be replaced. We kids had been told we were smart one too many times, and were beginning to turn into a sort of Smart Kids' Mafia. 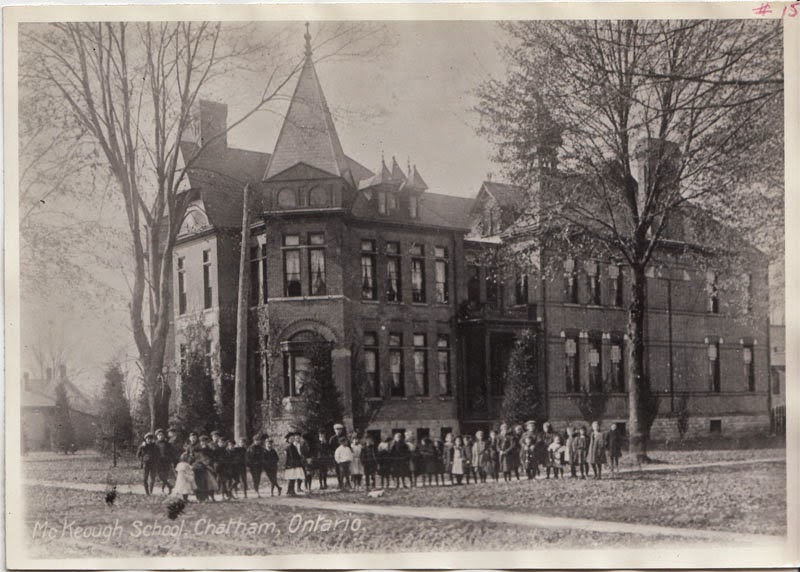 I didn't keep photos of QEII, though they exist, along with Chatham Collegiate (my high school) and The Pines Ursuline college, a nunnery where I took violin lessons. Talk about altogether ooky.

Didn't keep them because, except for the photo of my Grade 6 teachers, they don't especially interest me or twig any strong memories. They're just bland middle-of-the-road 1930s-built architecture, though CCI may be older than that.

Good to know they are there, however. Apparently, somebody still cares. 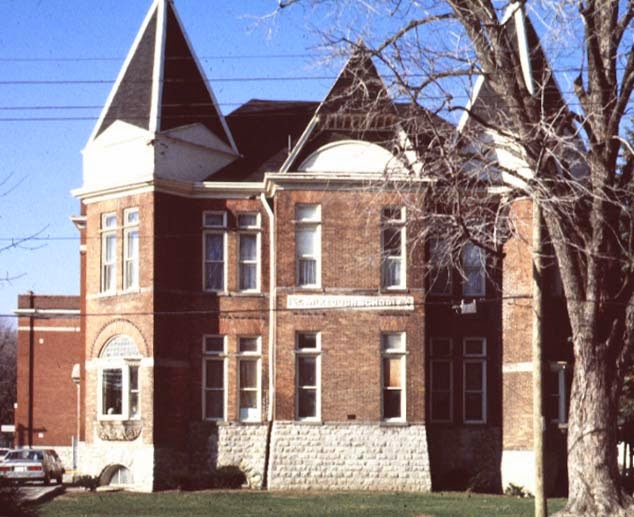 POST-BLOG OBSERVATIONS. Mostly the footwear. I notice many of the little girls in the front row are wearing their best shoes, Mary Janes with white knee socks. But I also notice argyle socks, and even saddle shoes, which I have always loved (but never owned, though I did have penny loafers in Junior High). I do remember being told to "dress up for Elmer", picking my Sunday School outfit which was unusual for a school day, my parents having received a notice that the distinguished elephant would be making his yearly appearance. When you think about it, putting your best clothes on for the benefit of a giant papier-mache head is a pretty bizarre concept, but no more bizarre than all the other things that happened at McKeough.

And where are all the black kids? Integration hadn't happened yet. By high school, that had changed. But I didn't find out until years after high school that Chatham was one of the termination points of the Underground Railroad, providing safe haven for runaway slaves before and during the Civil War. This should have been a point of pride, but it wasn't mentioned in school, not even once, in spite of Chatham's higher-than-average black population. My mother found out about it from a history book, not another person. I did sort of notice how many black kids there were, but I just figured it was a Windsor-Detroit thing (and by the late '60s, we DID know a lot about the Motown scene). Now I know that shameful and deliberate historical omission is as much a part of Southwestern Ontario history as those formidable old brick buildings. 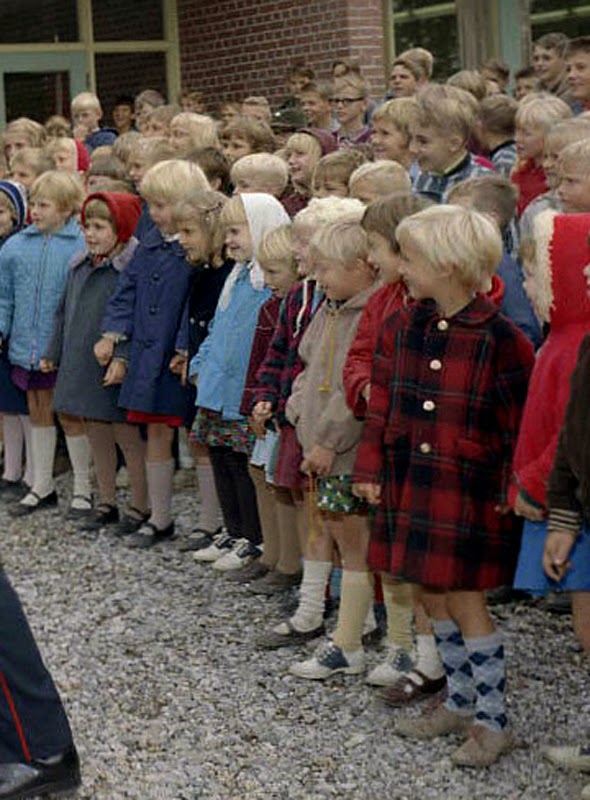 Notice all the blonde heads! Nothing ethnic is going on here at all. 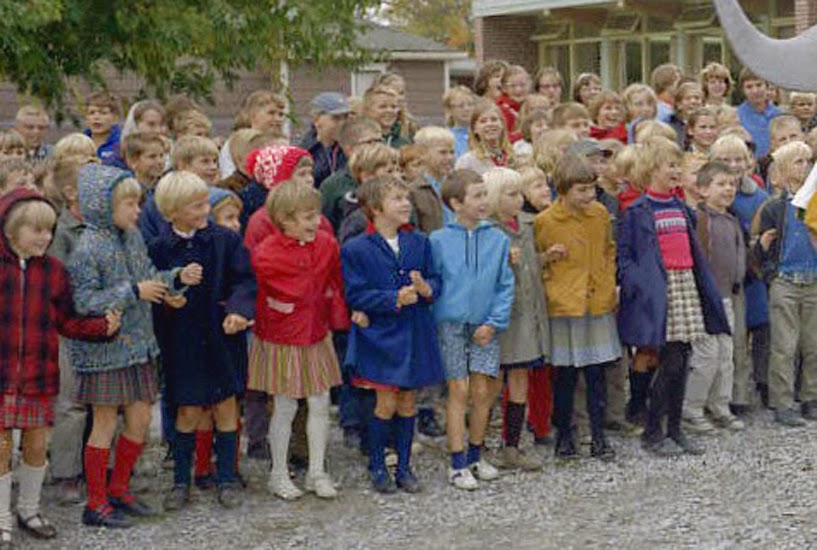 Though it isn't easy to make out in this photo, the kids faces are lit up with glee. Their body postures are full of eagerness and excitement. This Elmer visitation, like the McKeough School Picnic with the burning schoolhouse firecracker set off at the very end, is one of the highlights of their year, even though they come away from it with nothing except a bunch of safety rules. 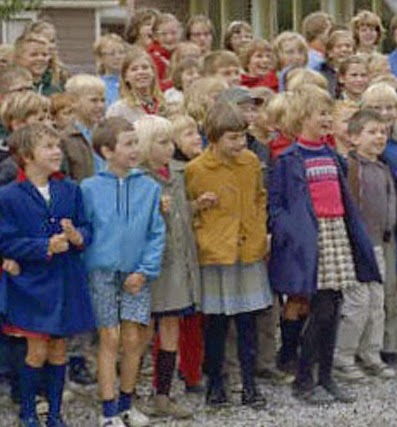 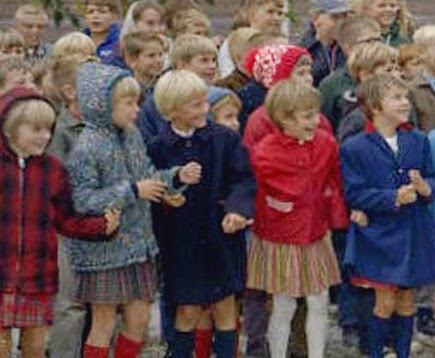