Posted by Margaret Gunning at 10:50 PM No comments:

Dupes, dopes, Doyle, and a leprechaun in Alabama

You know how one thing leads to another? No? Neither do I, it's only January 5. I haven't started ANY of the things I've resolved to do. Whatever they are. Meantime, I was watching this thing, y'know, this thing on TV called Mysteries at the Museum. . . quasi-educational, sort of, but it talked about these little girls who took photos of "fairies" about 100 years ago, photos so fake they would be laughable even then, and - somebody fell for them, making you wonder what sort of  IQs these literary types really have. I don't want to paraphrase this cuz I'm lazy, so here is a chunk of an article about it. I haven't shown this to my husband yet, who worships Sherlock Holmes and everything Sir Arthur Conan Doyle ever wrote. I don't want to disillusion him and reveal to him the fact that his hero was just another blithering Englishman with the intelligence of a katydid. 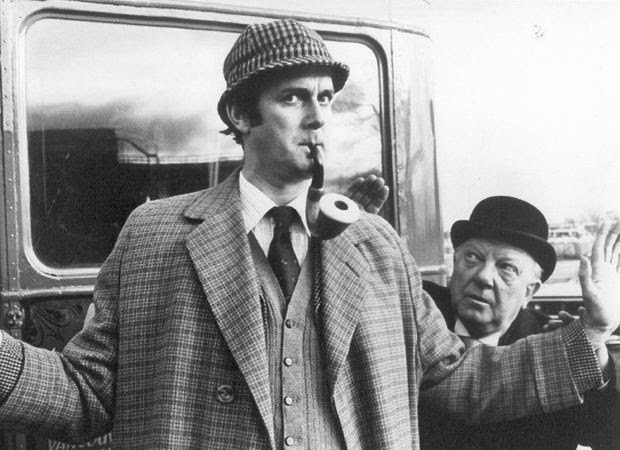 Doyle was a credulous dupe for various kinds of nonsense. He not only believed in spiritualism and all of the phenomena of the seance room, but he also believed in fairies.


In 1917, two teenage girls in Yorkshire produced photographs they had taken of fairies in their garden. Elsie Wright (age 16) and her cousin Frances Griffiths (age 10) used a simple camera and were said to be lacking any knowledge of photography or photographic trickery.

Photo No. 1, above, taken in July, showed Frances in the garden with a waterfall in the backround and a bush in the foreground. Four fairies are dancing upon the bush. Three have wings and one is playing a long flute-like instrument. Frances is not looking at the fairies just in front of her, but seems to be posing for the camera. Though the waterfall is blurred, indicating a slow shutter speed, the fairies, are not blurred, even though leaping in the air.

Here's a more detailed look at this picture.

Photo No. 2, taken in September, showed Elsie sitting on the lawn reaching out her hand to a friendly gnome (about a foot high, with wings) who is stepping forward onto the hem of her wide skirt.
Photographic experts who were consulted declared that none of the negatives had been tampered with, there was no evidence of double exposures, and that a slight blurring of one of the fairies in photo number one indicated that the fairy was moving during the exposure of 1/50 or 1/100 second. They seemed not to even entertain the simpler explanation that the fairies were simple paper cut-outs fastened on the bush, jiggling slightly in the breeze.

Doyle and other believers were also not troubled by the fact that the fairy's wings never showed blurred movement, even in the picture of the fairy calmly posed suspended in mid-air. Apparently fairy wings don't work like hummingbird's wings.

Hardly anyone can look at these photos today and accept them as anything but fakes. The lighting on the fairies does not match that of the girls. The fairy figures have a flat, cut-out appearance. But spiritualists, and others who prefer a world of magic and fantasy accepted the photos as genuine evidence for fairies.

Photo No. 3 "Francis and the Leaping Fairy" showed a slightly blurred profile of Frances with the winged fairy suspended in mid-air just in front of her nose. The background and the fairy are not blurred.

Photo No. 4 shows a fairy hovering in mid-air offering a flower to Elsie. This fairy may be standing on a branch, for the fairy images are of indeterminable distance from the camera.

Photo No. 5 "Fairies and their Sunbath" is the only one that looks as if it could have been an accidental or deliberate double exposure.

Arthur Conon Doyle not only accepted these photos as genuine, he even wrote two pamphlets and a book attesting the genuineness of these photos, and including much additional fairy lore. His book, The Coming of the Fairies, is still in print, and some people still believe the photos are authentic. Doyle's books make very interesting reading even today. Doyle's belief in spiritualism, convinced many people that the creator of Sherlock Holmes was not as bright as his fictional creation.

Illustration for Alfred Noyes' poem "A Spell for a Fairy" in Princess Mary's Gift Book by Claude Shepperson. (Hodder and Stoughton, no date, c. 1914, p. 101ff). Compare the poses of these figures with those of three of the fairies in Photo No. 1. The figures have been rearranged and details of dress have been altered, but the origin of the poses is unmistakable.
A curious fact is that in this book, a compilation of short stories and poems for children by various authors, there's a story, "Bimbashi Joyce" by Arthur Conan Doyle! Surely he received a copy from the publisher. If Doyle had noticed this picture, and if he had the sort of perceptiveness he attributed to Sherlock Holmes, he might have concluded that the Cottingley photographs were fakes. But, maybe not. Believers are good at seeing what they believe, and not seing things that challenge their beliefs. Or perhaps the close match of drawing and photos is a supernatural psychic coincidence.

On the matter of Conan Doyle's gullibility, Gilbert Chesterton said

...it has long seemed to me that Sir Arthur's mentality is much more that of Watson than it is of Holmes.

It is worth noting that Doyle was said to have an intimate relationship with Lucky, the Lucky Charms Leprechaun, later made infamous by an interminable series of cartoon ads for cereal which was nothing more than dye and a torrent of sugar. When he found pink hearts, yellow moons and green clovers floating around in his cereal bowl one morning, Doyle believed he had found irrefutable scientific proof for his beliefs and published a series of seventeen volumes entitled How I Got Lucky. In honor of his remarkable literary achievement, Doyle was granted an earlhood and crowned Lord Snuffleburg the Stupid.  Lucky the Leprechaun was played in the movie version by Sir Basil Rathbone.

Thought for the day, if not the century

From Child's Garden of Verses

Posted by Margaret Gunning at 5:14 PM No comments:

Posted by Margaret Gunning at 3:08 PM No comments: