Why fuck up your face? 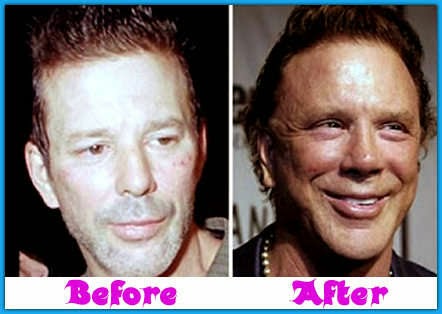 It's not just Renee Zellweger.

Actors do this to themselves, which for some reason is supposed to make it OK, or at least "more OK": "well, MEN do it too, you know!" "Oh. Yeah." End of discussion.

For, you see, if men do it too, it is now OKAY to mutilate your face. It has been justified. Go home now.

This bizarre beforeandafter belongs to Mickey Rourke, an actor I never much liked anyway, but he must have gone to Acapulco for his surgery. It just looks bad. He has that bizarre OMG look, that instant recognition that something awful has been done to his face. He does not look "young"; he merely looks weird. 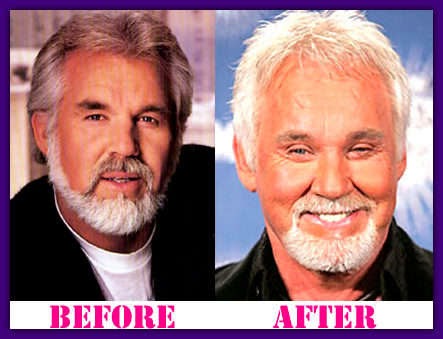 This one is really sad. I've never been a Kenny Rogers fan (except for that "know when to hold them, know when to fold them" thing - who doesn't like that?), but this was just desperate, and shocking. He really pulled a Zellweger here, and went from a rugged silver-fox-type cow-dude to a sort of mincing hairdresser with a Bugs Bunny smile, a brow-lift and a weave. He doesn't look like ANYBODY, let alone Kenny Rogers. Renee at least looks - well, if not attractive, then at least doll-like in her new guise. She looks kind of like Renee Zellweger's distant cousin (who has had a lot of work done).  As for Kenny, I wonder how he sees out of those things?. Maybe he can start a new career as a Kenny Rogers impersonator. That is, if anyone believes him. 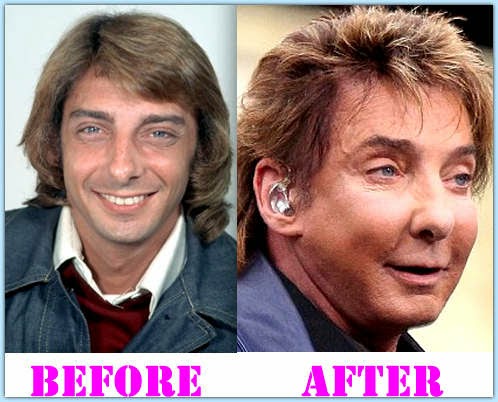 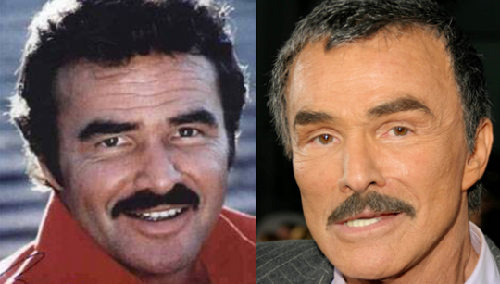 Burt Reynolds, who no longer needs to buy a Halloween costume. He can go as Burt Reynolds and scare little children. Note how he never shows up in movies any more: I guess directors want their actors to look like they're alive. 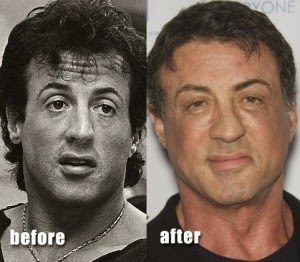 It's slitty-eyes syndrome again. Women's eyes are pulled up slantwise (which is funny, because meanwhile Asian women are busy erasing every trace of their heritage from their faces), but for some reasons dudes' eyes are pulled sideways so aggressively that they can barely see. In this case, it looks as if his eyelids were simply removed. 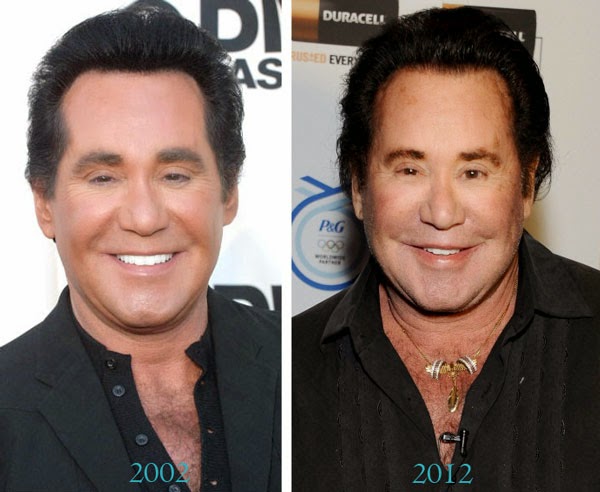 Is there a "worst case" in this macabre house of wax? Yes, there is, and you're looking at it. Even on the left, he's had significant work done, especially around the eyes. But that wasn't enough. These guys never leave well enough alone, do they? They always go back for more. His eyes are now closer together than the Royal Family's, and have that disturbingly sunken look that makes me wonder if men aren't supposed to have eyes after a certain age. Cheek implants, chin implants, God knows what sort of other implants. When this monstrous freak walks out onto the stage in Vegas, the crowds scream with recognition, even though they don't have a clue who he is. But they've paid for Wayne Newton, so this must BE Wayne Newton. 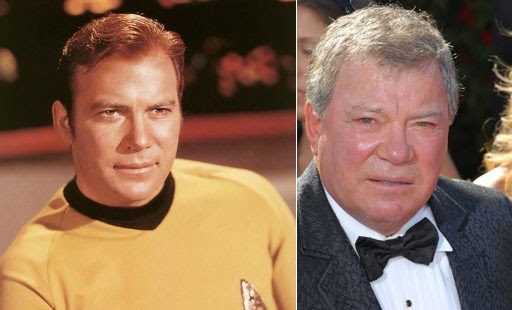 But soft! What light from yonder window breaks? What former Shakespearian actor is this, what good Canadian boy, what Governer-General-Award recipient? This is the man who made a deal with the devil not to age. It has little or nothing to do with his face. He looks like a person. His face does not look messed-with at all. He has gained weight, but carries it so well it makes YOU want to gain weight too (well, not quite). He still sits a horse remarkably well at - Jesus, he's 83! He is 83 goddamn years old, and this past summer he was the Grand Marshall at the Calgary Stampede. The white hat looked pretty swell on him, too. 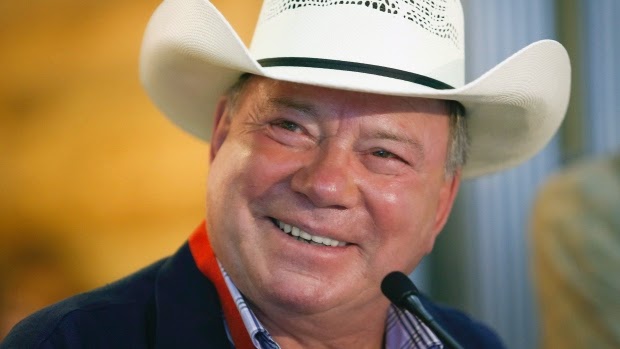 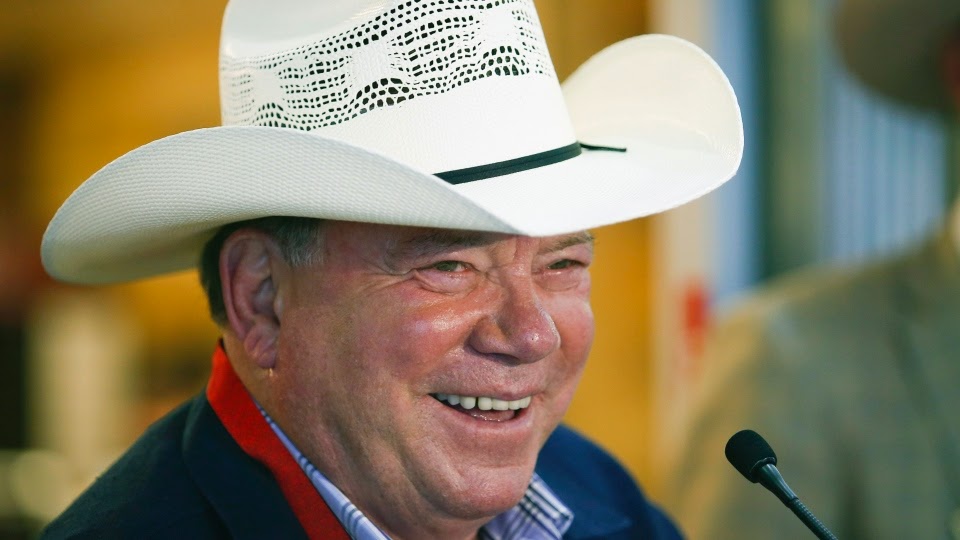 Shatner went through several phases: his young manhood, which makes me want to kvell: 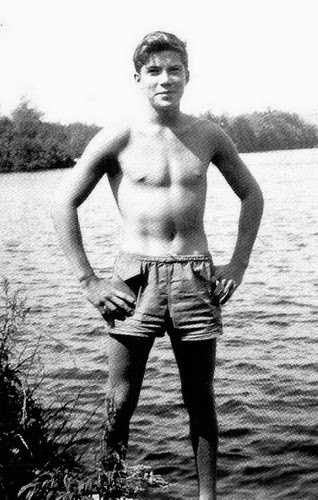 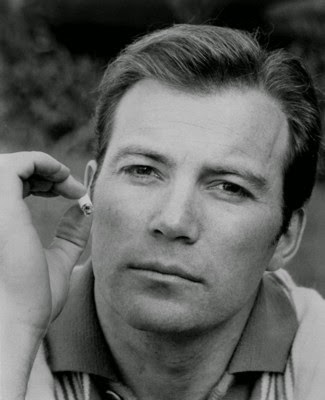 (and I don't know why exactly, but I want to jump on top of this young god with the 100% self-assurance) 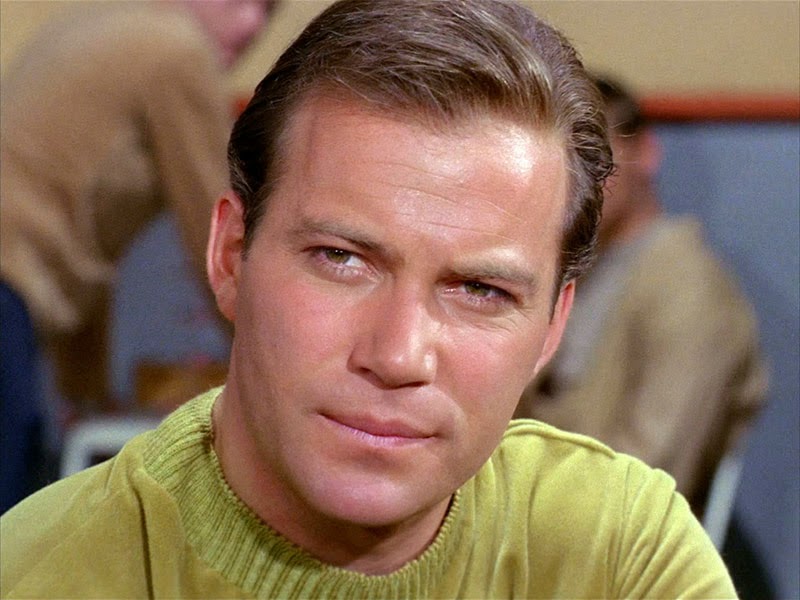 . . . his Star-Trekkian phase, in which he was older and more conventionally handsome; 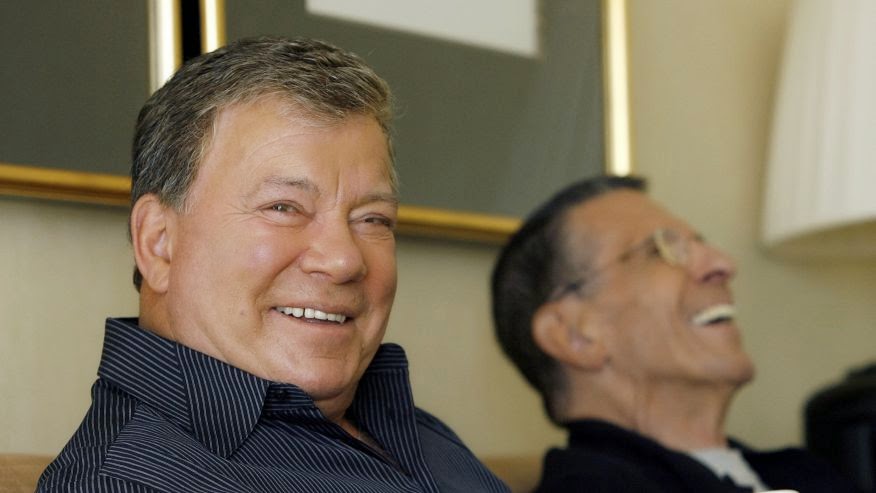 . . . his little-bit-obvious-hairpiece stage, soon to be replaced by transplants or something else more natural. . . 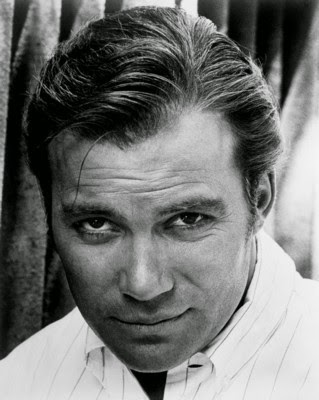 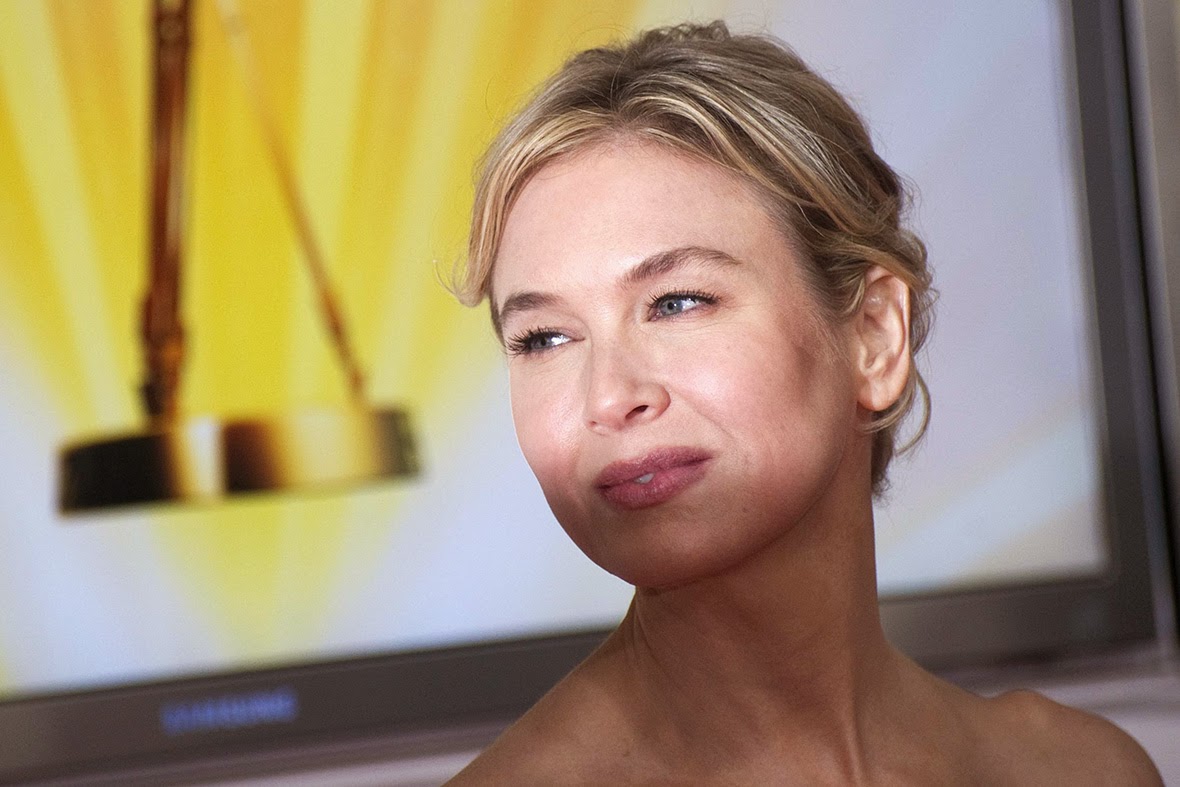 Now comes all the commentary, the kerfuffle, and if she needed to call attention to herself, this did it. Strangely, she will not admit to plastic surgery but claims she's just taking better care of herself and is more "relaxed". 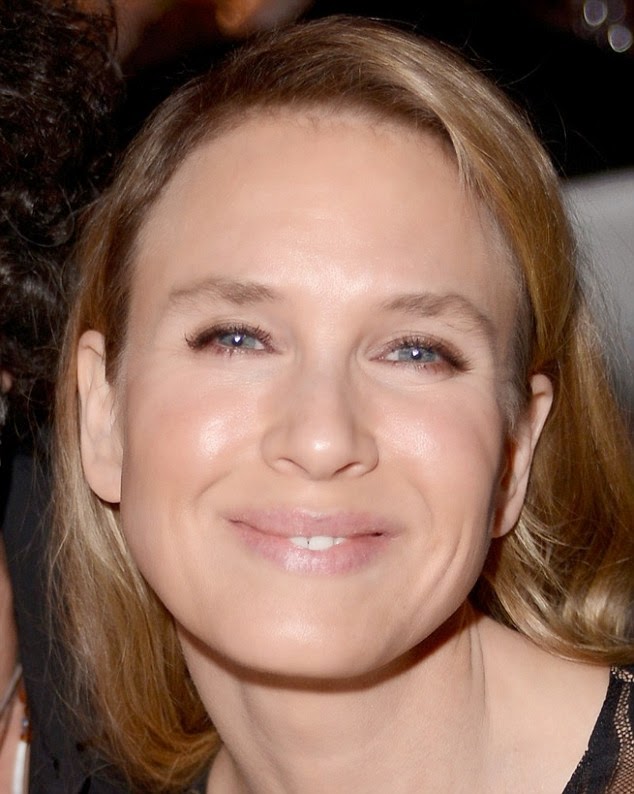 What's really sad is the need to deny you've had any "work" done. It's all due to a "healthier lifestyle". But the healthiest lifestyle in the world wouldn't change you into a different person. 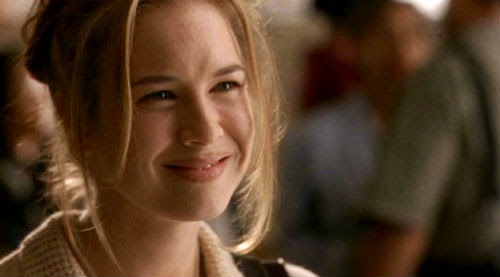 These strenuous denials are a veil over desperation, and this is not something Renee created herself. She wants to work, but paradoxically, I don't think her "new look" is going to land her parts. No one is going to know who the hell she is.

Nobody else has said this, because everyone is so busy saying, "Duhhh. . . does she look different?" There are screams and squawks from all over the planet because this is a "trending" story that has knocked terrorism out of the ballpark.. Half of them are horrified exclamations along the lines of "What has she done to herself?"; the other half are more like, "She looks fabulous! I like her so much better now. Leave the girl alone! She can do what she wants with her face." I've also heard "She looks different? Not to me she doesn't. It's just her makeup. She looks exactly the same." 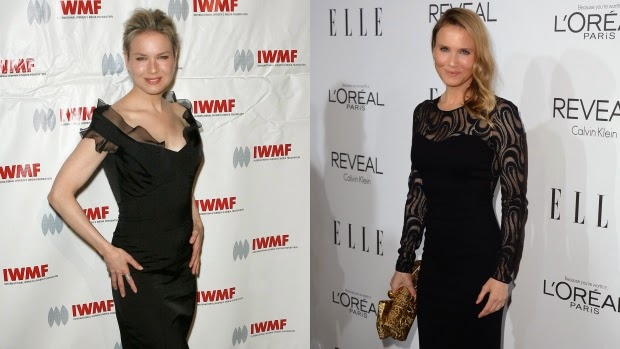 Just so. But this just isn't Renee. What would it be like, I wonder, if every time you looked in the mirror you saw a different person? It's like those old film noir movies where the gangster has plastic surgery to change his identity. One scene always involves the doctor cutting the bandage and winding it around, and around, and around (showing the hood's vision gradually getting brighter and brighter) until, voici et voila, the new face. 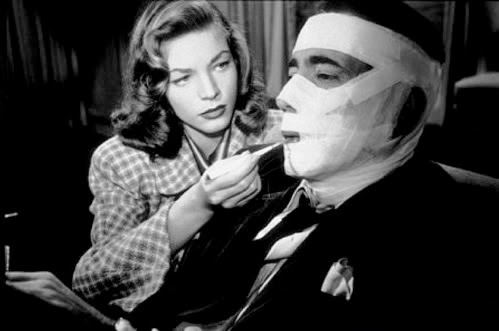 Plastic surgery existed back then, because John Dillinger had it done in a vain attempt to disguise his identity from the police. I don't see how they could have botched it any worse than they do now. In fact, though this is an issue I won't get into now, there is a TV show called Botched that deals with remedial boob/nose/cheek/jowl jobs, in which the doctors have to make do with what is left of normal tissue. Usually the results are still artificial, but somewhat less Frankensteinian than before that fatal "holiday" to Mexico or the Phillipines. 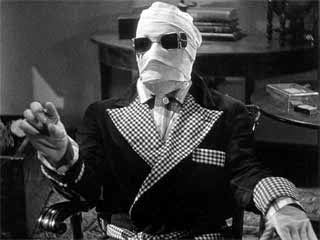 Just in time for Halloween. . . the Invisible Man. I can't help but think of the old Renee, mischievous as always, crouching down and  hiding behind the new one. But still invisible. 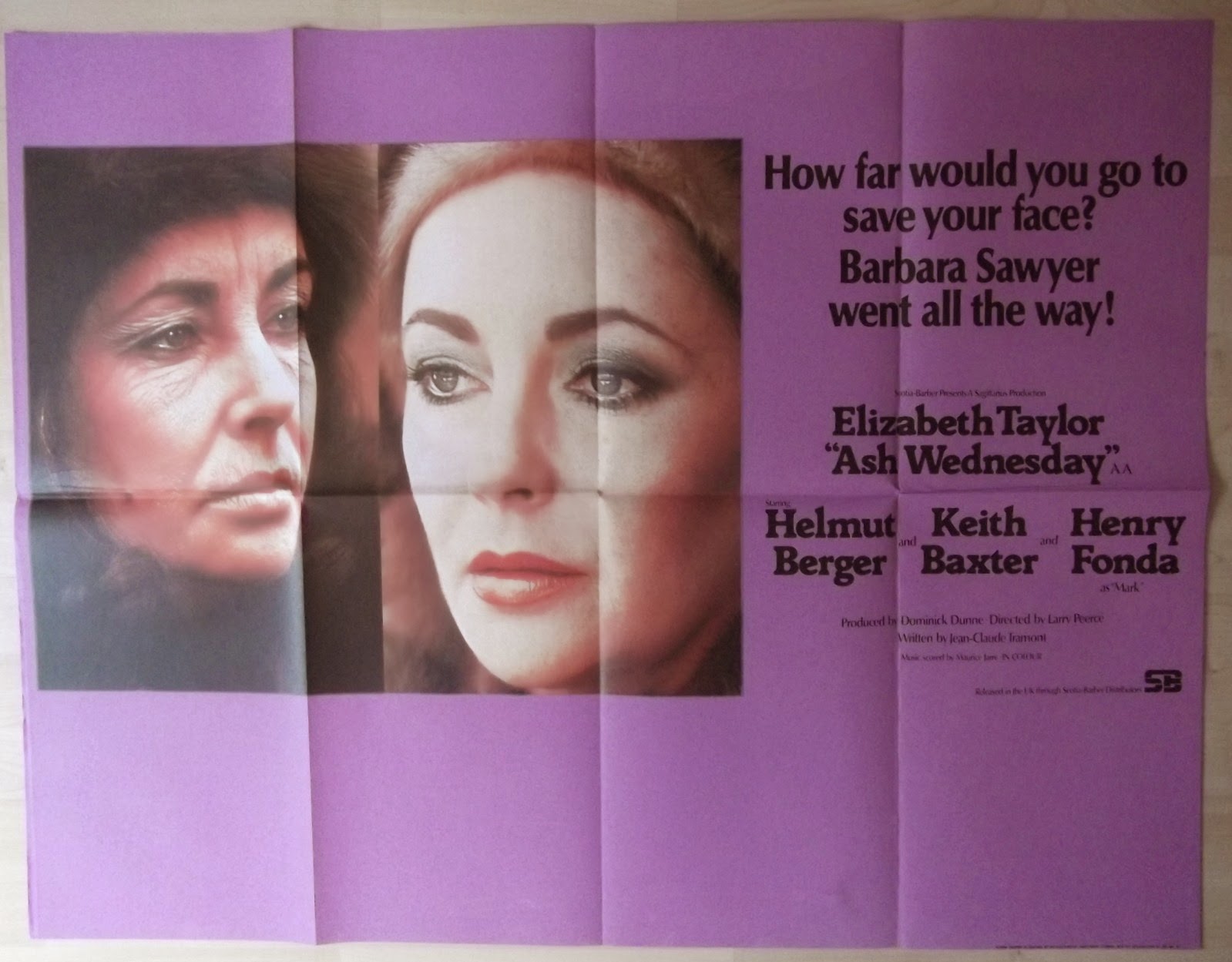 Whole movies have been made on this theme, such as Ash Wednesday, in which the stunning Liz Taylor pretends to be (gasp, shock, horror) old, or at least old-looking. In the movie, she's maybe 40. Most of the sexpots we see around now, such as Sofia Vergara, are about that age.

I was going to make a few gifs of her movie transformation, but was so gobsmacked by the YouTube video that I posted it whole. It's 14 minutes long and if you can get through the whole thing, you're a better man than I am. Gunga Din. 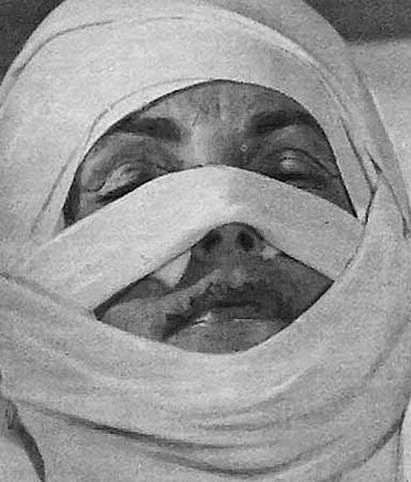 We used to ask ourselves: what reputable plastic surgeon would ever surgically alter someone so much that they didn't even look like themselves? That was back when there were standards, and "would never" still held together as a stand-in for integrity. Now people transform themselves into Barbies and Kens, Michael Jacksons, Angelinas, etc. (remember that Octomom character? Whatever happened to her, anyway?) Pay up front, and you'll have any "look" you want. Slicing and dicing seems particularly popular, especially if you resort to Third World procedures. And a lot of people do. Then again, lots of people go to Thailand to have sex with little children, and no one stands in their way.

Posted by Margaret Gunning at 10:49 AM No comments: