Drama in the back yard

Such drama in the back yard! Ever since I lost Jasper, my beloved lovebird, I've had a sort of bird-shaped hole in my life. I thought longingly of a bird feeder, but our house is constructed in such a way that it does not allow hanging anything that we can see.

One day I was in the garage and saw an old  Ikea lamp and thought: that's it! With some remodelling, it would work as a stand that could hold some sort of container that would drain water (so it wouldn't be flooded with Vancouver rainwater). I didn't think birds would object to wet seeds. After much experimentation and remodelling, we had a sort of jerry-rigged feeder in our back yard and were enjoying the visits of juncos and chickadees. 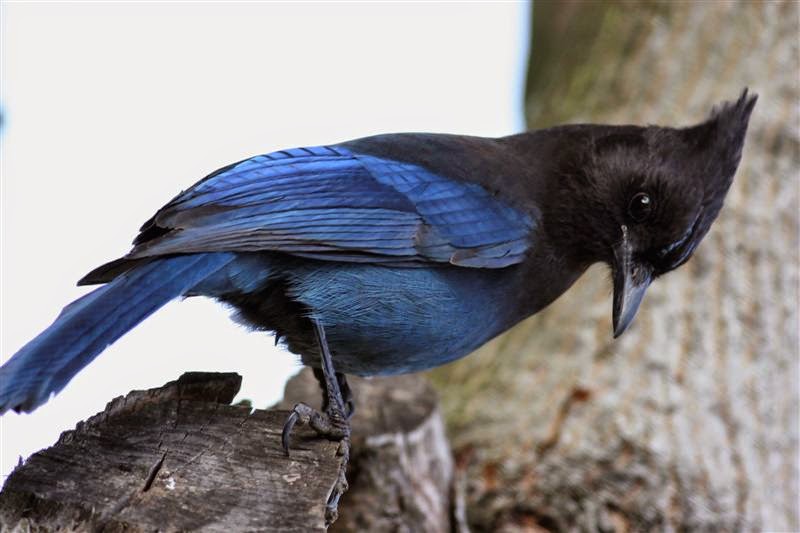 One day I heard a dreadful screech and saw a large prehistoric-looking winged creature darting and swooping overhead. After looking it up on the Cornell Ornithology site, I recognized the Steller's jay. I noticed at that point having to refill the food supply practically every day, then finally saw His
Birdness up there - such a magnificent creature, handsome, arrogant, a little wicked. But I still couldn't believe he was cleaning out the feeder so often. Then I looked outside one day and A SQUIRREL was climbing the pole of the lamp, shimmying up like some sort of demented pole-dancer. The squirrels had breached the unbreachable feeder. I sprayed the pole with Pam, and now they just endlessly climb in one spot, thinking they're making progress. Squirrels are resourceful but not too bright.

As a little kid, I snuffled out signs of nature wherever I could. Where I lived was decidedly urban, but things were different then, without the incessant din that seems to be part of modern life: the endless construction, the dust and smoke, the earsplitting racket that never stops. Right now as I sit here writing, there is a constant, steady drone of something like a very loud vacuum cleaner. (WHAT IS IT???). No one else ever mentions the noise, because like the frogs in boiling water, they have become so acclimatized to it that it no longer registers on them - or else they are now half-deaf. 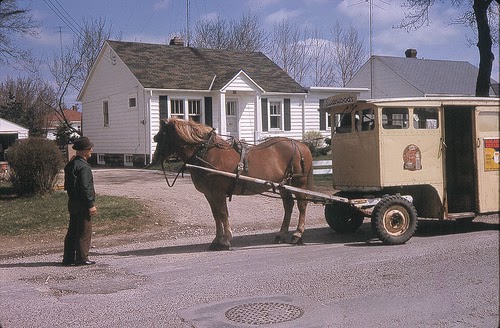 The milk was delivered by horse and wagon. Cloppa, cloppa, cloppa. (This ended up in my first novel, Better than Life.) People find it hard to believe, but it was true. My friend and I walked to Tecumseh Park on our own when we were maybe eight or nine. While social critics railed on and on about the blinding pace of progress and how it was killing human beings, not to mention the gross and alarming "population explosion" that no one ever refers to any more, Chatham, Ontario plodded on. Now I see it as a magical place, with a flowering cherry tree in the back yard that I could climb to get into the neighbor's yard to look at their pigeon coop. This was lifted whole for Mallory, my second novel.

Birds were a favorite fascination. We never had a bird feeder, though there were plenty of places we could have put one. In the depths of winter, my mother would ask the butcher for suet - really, just the fat trimmings from steaks and chops - and throw it out onto the snow. She never watched to see if the birds got it, or if it was gulped down by some roaming dog. (Coyotes, raccoons and bears were never a problem then, as we had not yet stolen all their land and backed them against the wall, where they would be demonized for encroaching on OUR territory and causing us trouble.) 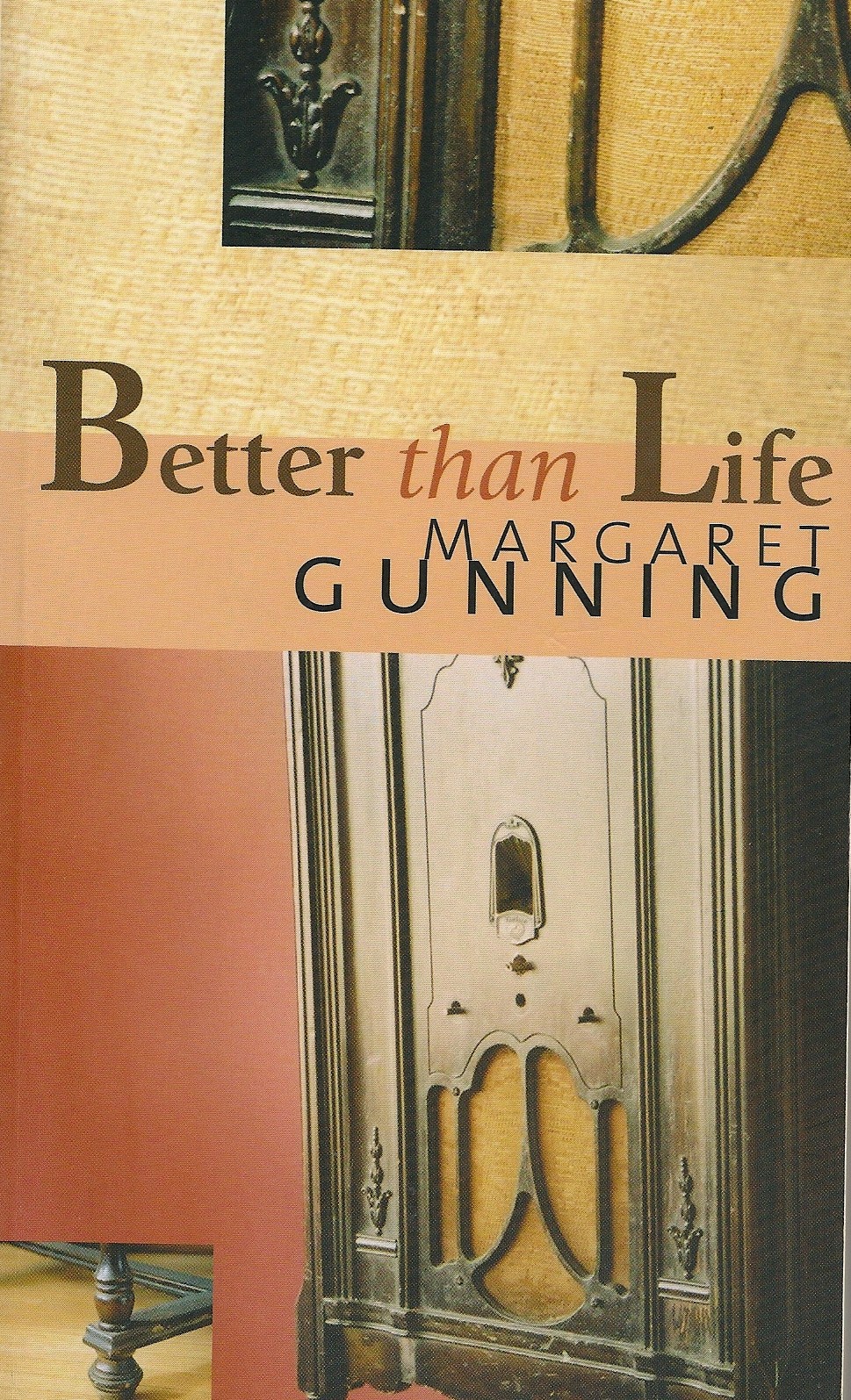 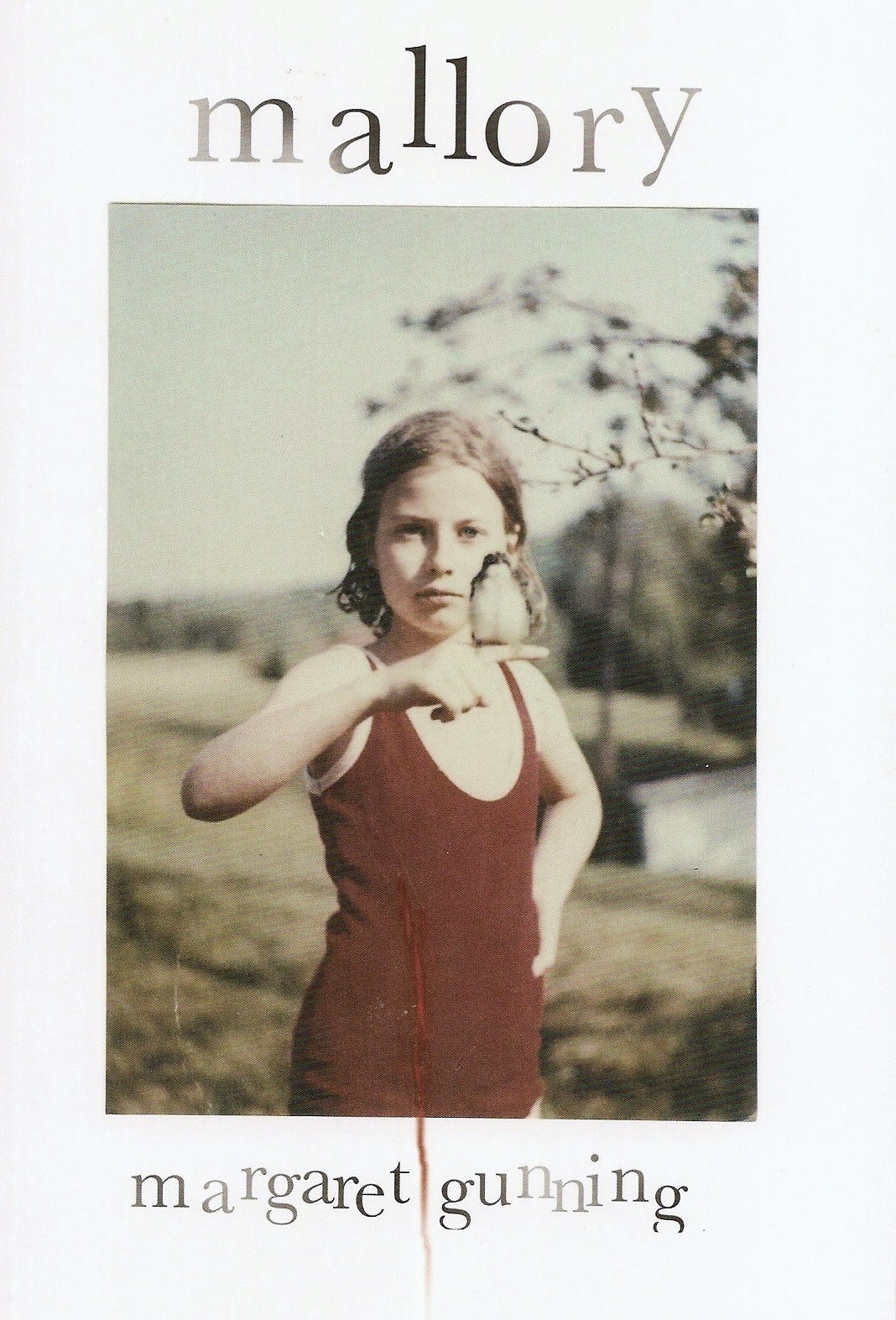 I wondered about the suet. The reason she gave was "in the winter, the birds need a lot of fat to help them keep warm." This didn't make sense until a long time later.

I would adopt baby birds that fell from the nest quite frequently, fully believing I was rescuing them. I had no idea then that many species of bird PUSH their fledgelings out of the nest before they are able to fly properly,  then swoop down on on them to feed them until they are ready to take off on their own. A strange system, given the ubiquitous cats that just roamed everywhere then (for to keep a cat inside, let alone spay or neuter it, was unthinkably cruel). 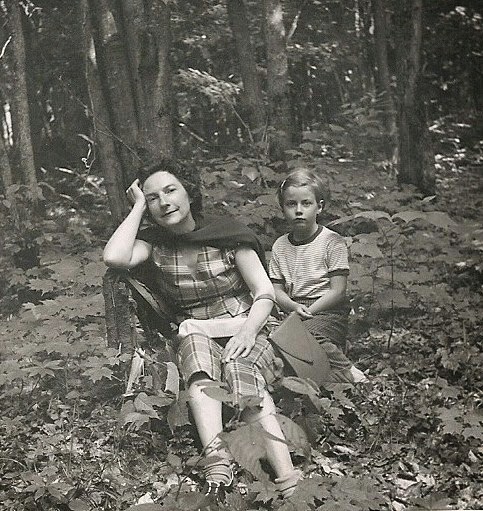 But I took them in anyway, enchanted. Most of them died, of course, because I really had no idea what to feed them. One pigeon made it, in fact he burst out of the box and started flying all over the porch where I had to keep these things. But he was close to flight anyway and only sickened by the pollution in the Thames River. (Some things never change.) 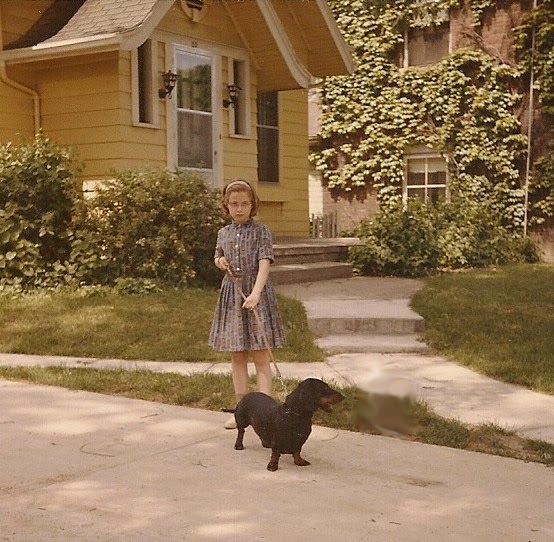 I was also quite taken with squirrels, and noted that another neighbor had tamed a baby squirrel which clung to his arm. I WOULD have a squirrel for myself. Since I was bullheaded, a requisite for living in an environment which was almost wholly devoid of love, I kept on the watch for one. Then I saw a grey baby on the cherry tree, with that stunned, frozen look squirrels have when panicked (have you ever seen one run back in front of a car when crossing the street?). I put my hand out, not just to touch him but to grab him, and got my reward. Had to get a tetanus shot. Heard that bitter, even savage squirrel chattering for some time after that, probably the parents swearing at me, and rightly so.

The other day, having thrown a handful of grapes out in the back yard (and yes, I know I'm not supposed to feed wildlife) I noticed a black squirrel sitting up spinning the grape around in its paws, eating and spitting flying pieces out, probably the skin. I decided to see how close I could get. Normally they scram when I open the back door. It was amazing - I came closer and closer, and he just stood there. I was close enough to touch him, but didn't - I had already broken several rules of back-yardness already, and could just hear the scolding I'd get from all those militant naturalists. 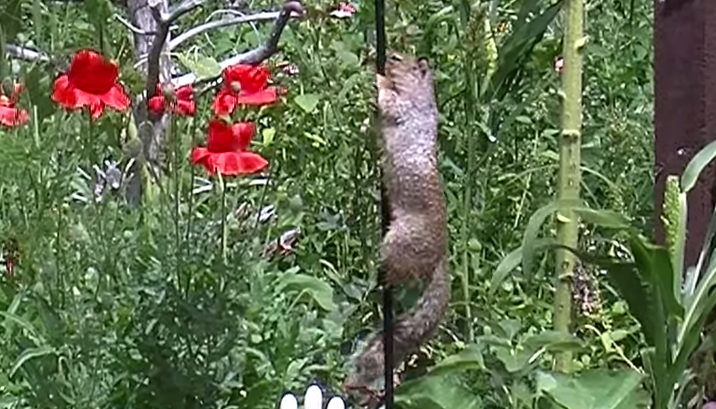 Of course he ran away after a few seconds. I wondered what happened. Frozen in panic? Greedy for more grapes? (He had lots already.) I wondered if this was my pole-dancing squirrel, or if all of them had tried it. I do notice the older squirrels look very scarred and beat-up, while this year's babies are still fluffy and sleek. The one grey squirrel who often visits has an impossibly fat, silver-grey tail that makes you want to believe in fur coats again. He flaps it around in that adorable, yet alarming way that squirrels have. Probably a warning to keep off.

This has awakened the little girl in me. Finding things on YouTube that I haven't heard in decades is a strange feeling. I'm reaching out for something. I will probably attain another lovebird, have put my name in with a breeder, but one never knows about bird temperament. I love my Steller's jay, the way he darts his head around, posturing like a proud show dog, and raises his pointed black crest. Well, we haven't destroyed everything quite yet. But I am secretly glad I will not be here in 50 years, or even 20.


I have been trying to recreate an album called Pastorales, long out of print, and  have found a few favorite tracks. This piece reminds me of the innocence and enchantment of my childhood "nature days".