I had almost forgotten about this monstrosity, yet another self-playing musical contraption from Siegfried's Museum in Rudesheim, Germany. Also known by its German name, Siegfried's Mechanisches Musikkabinett, but that's too hard to spell.

This one is truly frightening. It seems to need to get up steam before it starts, then for the longest time doesn't seem to know what tune it's supposed to play.  I'm not sure it ever sorts that out . The banjo and cymbal look like staring eyes, the keyboard a grinning mouth. Everything moves, and what comes out, if not music, is certainly something. I finally figured out that they have taken the back off this thing so we can see what's going on inside. The other side of it MUST look better than this.

Posted by Margaret Gunning at 5:06 PM No comments:


Having finally found a much better video of the automaton-orchestrion from Siegfried's Museum, I wondered if I should completely rewrite my earlier post, but I don't think so. It's true people are not as drawn to this instrument because of its sheer creepiness, with gorillas in frilly dresses opening and closing their mouths as they jerkily play stringed instruments. The sheer size of the cabinet is intimidating, practically covering a wall. And the music is the strangest-sounding stuff, almost grotesque. But it's the primitive quality of the music that comes from these things that attracts me to them. If I want good-sounding music I can turn on the radio.


I have yet to see any really decent video of Siegfried's Museum of Mechanical Musical Instruments in Rudesheim, Germany. It looks like a fascinating place, with over 350 examples of antique self-playing instruments, some going back over 200 years, but all the videos are shot by tourists, raw footage unedited, with priorities that simply baffle me. Most linger for several minutes on a hideous thing that plays six out-of-tune violins at once, and a not-very-old gramophone playing Doris Day singing Que Sera, Sera while everyone sways and sings along with misty eyes. All the items in the videos follow a certain sequence, so obviously this is an organized, preset tour, and only a few instruments are playable; most are probably too frail with age, which is too bad because the wheezy, sometimes off-pitch sound is definitely the best part. 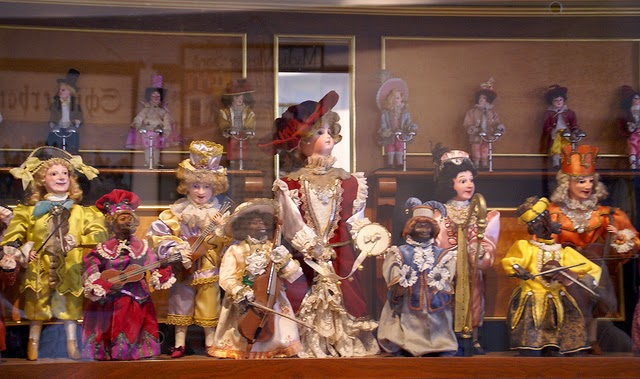 But I'm quiffed at one thing. (Is that a word?) Squicked, too, but that's something I want. The last exhibit is simply spectacular, an automaton orchestrion unlike anything ever made before. And I really can't show it to you unless I post a very lousy video that only shows it from one side. The tourists all seem to wander away from this, uninterested, when it is by far the most fascinating and rare piece in the collection (which is doubtless why they save it 'til last). I don't know how many figures there are in this, but I think it's around 30, and they are each playing a musical instrument in jerky fashion while wheezy, creepy, circus-y music plays in the background. Just my cup of tea! But the fact that nobody seems to realize what a spectacle this is means no one has ever properly video'd it. You get, at best, 30 seconds shot from an extreme angle, or an annoyingly bobbing-up-and-down shot over a lot of bald heads, or the glare of the glass cabinet. I can't edit YouTube videos, and for once a gif just won't do it, so all I can do is. . . oh I don't want to do this!! But here it is. I'll explain later. . .


I wish there were a way to shorten or otherwise edit the boring parts, and take a decent shot panning this amazing, one-of-a-kind work of art character-by-character. As I will show you in the totally-inadequate stills, not all the figures are human, adding an extra dimension of creepiness to the thing. 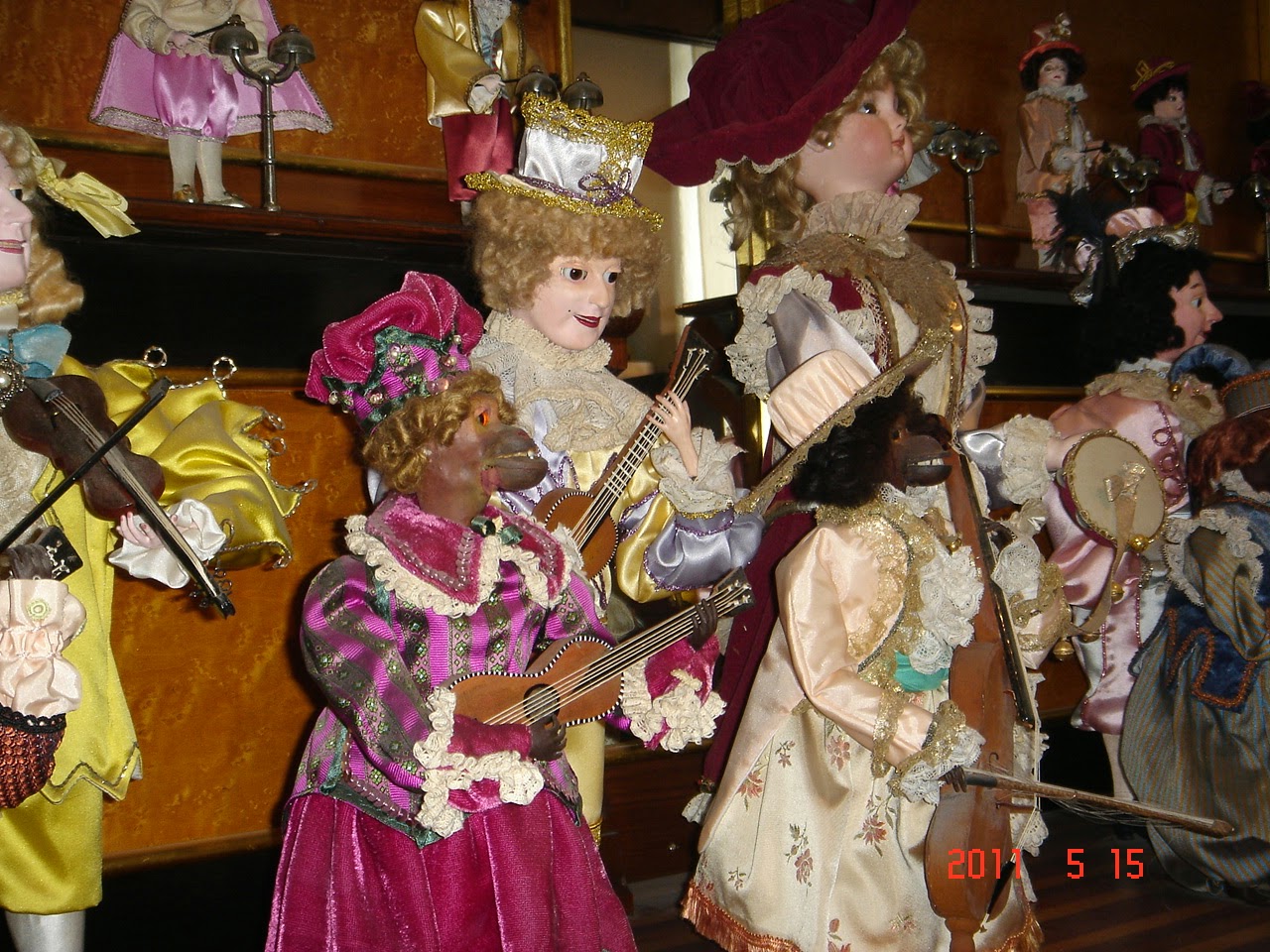 What amazes me right away is what good shape these are in. They must have been extremely carefully-protected from dust, sunlight, dampness, over-dryness, and anything else that would bleach out colours and shrivel up fabric.

The automaton/orchestrion was created by one Bernhard Dufner, and so far I can't even find a date because there is NEVER any information on YouTube with the videos! This whole subject is thinly-documented, though there are many dry lists and catalogue numbers on lousy old sites that haven't been updated in 10 years, with links that don't work worth a hoot. With no photos or videos, these are obviously meant only for those auction-obsessed collectors who are trying to fill an abyss within. 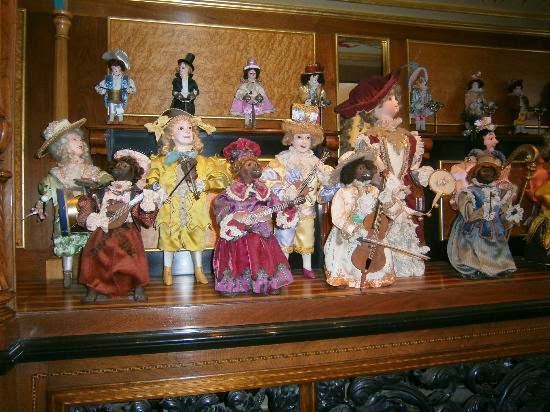 The cabinet itself is exquisite, as is shown by long shots which seem to dwarf the creepy, crazy, magnificent dolls within. It's a pity we can't see each doll in closeup and even handle it. Come to that, I don't think I'd want to handle a gorilla in a dress. But here is where National Geographic needs to get in there and take extreme closeups of these things, because they are truly remarkable. 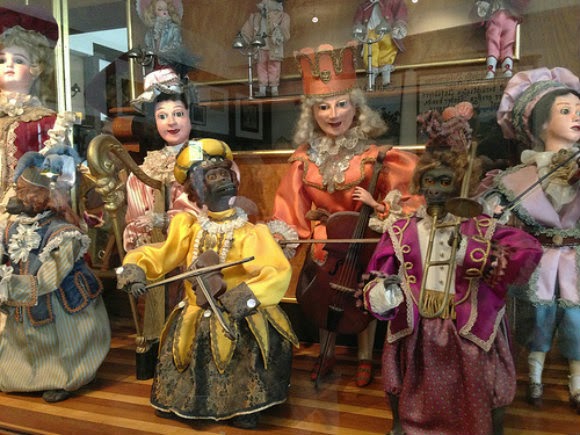 Dear God, I hope these are gorillas and not some hideous representation of black people! If it matches the caricatures of the day, it might be, rendering it even more creepy. 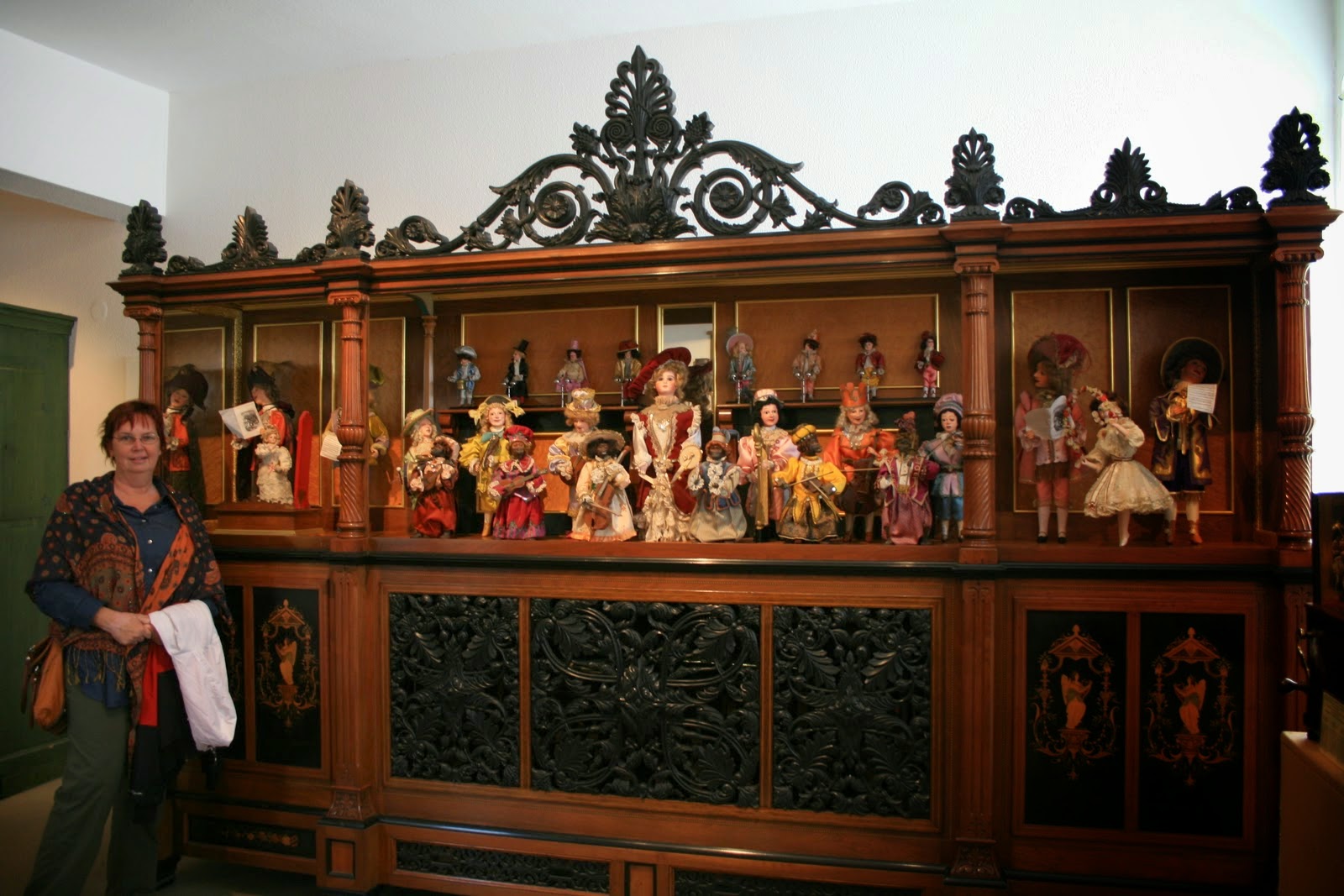 A long shot of the cabinet. Can you smell the old wood? Who was this made for? I must at least try to dig out some information. Imagine having this taking up half your living room. And wouldn't it be fascinating (another National Geographic special!) to see the workings of the thing, to take off the back and peer in? Imagine the feat of engineering that brought this into being. 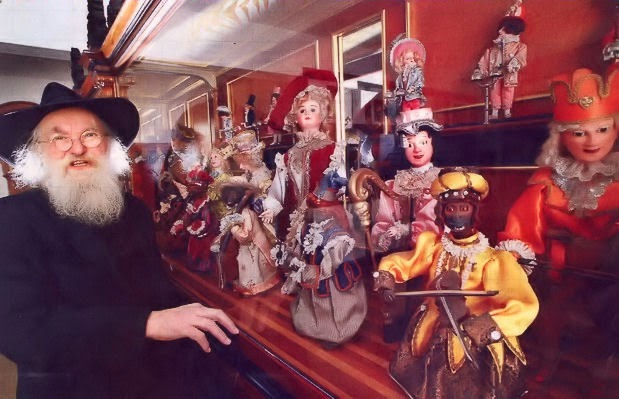 And here he is, Siegfried, master of the House of Creepy Magic, looking just as strange and Gandalf-like as you would expect him to be. He didn't create any of these bizarre instruments, but merely presides over it all. Never mind, watch the video, start it at 2:12 and watch to the end. And try to image what it's really like. 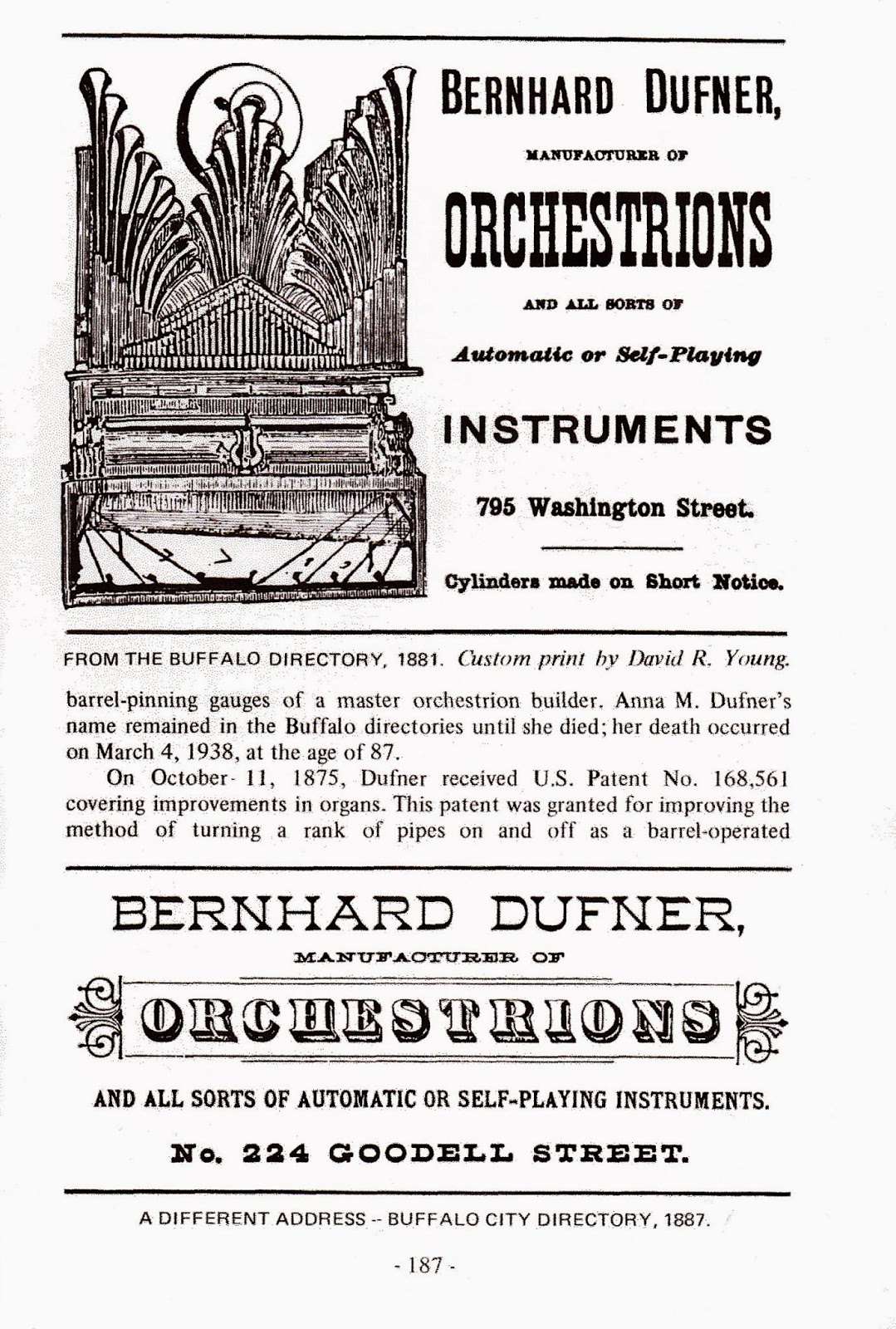 Blogger's P. S.: a big aha, but at the same time a depressingly small one: I found a journal of mechanical instruments, music boxes and stuff, and the list of articles went back to 1978. Obviously I couldn't/wouldn't read the whole thing, but after some sifting I found the name of Bernhard Dufner. He was not at all who I thought he was: an American, for one thing, working in the late 1800s when these contraptions were at their peak of popularity. (Imagine how business must have fallen off with the invention of the phonograph, not to mention photography and motion pictures.)

So his magnificent moving-doll orchestrion was likely built towards the end of the 19th century, though the costumes look baroque. It explains the still-vibrant colors, when fabric dyes had become much brighter and more stable. One wonders if the style of clothing was intentional, a way of "antique-ing" the thing to look more valuable than it really was. And what was he doing in Buffalo, New York, if he did such fine, European-standards work? Or was it some other Buffalo? The article, with its flyspeck type, was in PNG and not reproduceable, so I literally had to print this, scan and crop it. But it looks mighty handsome, doesn't it? Dufner is still pretty obscure, and Google searches netted me exactly nothing. But he did produce one strikingly original piece, still exhibited 150 years later on the other side of the world. The story is so unlikely that it could only be true.

Posted by Margaret Gunning at 10:54 AM No comments: