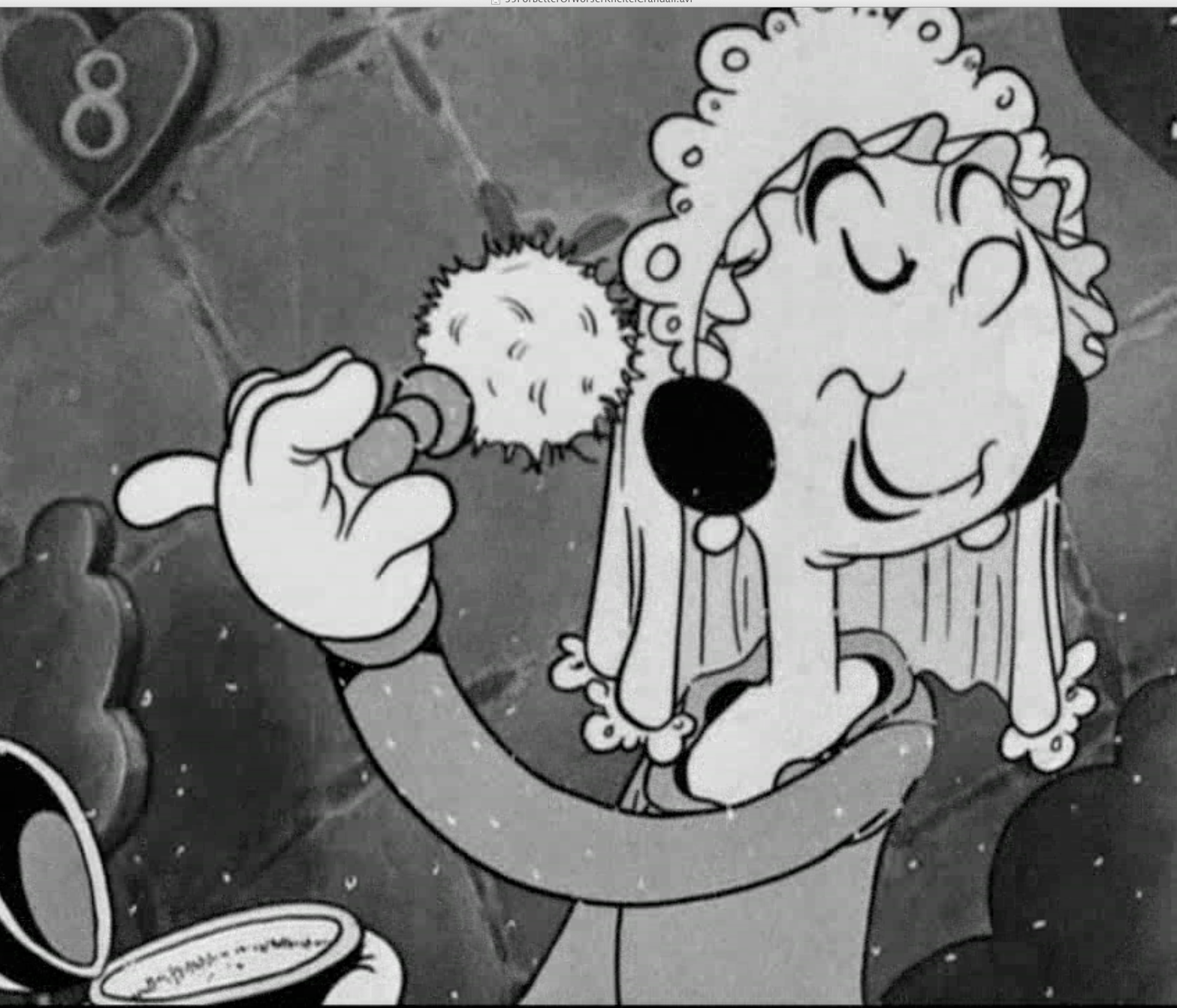 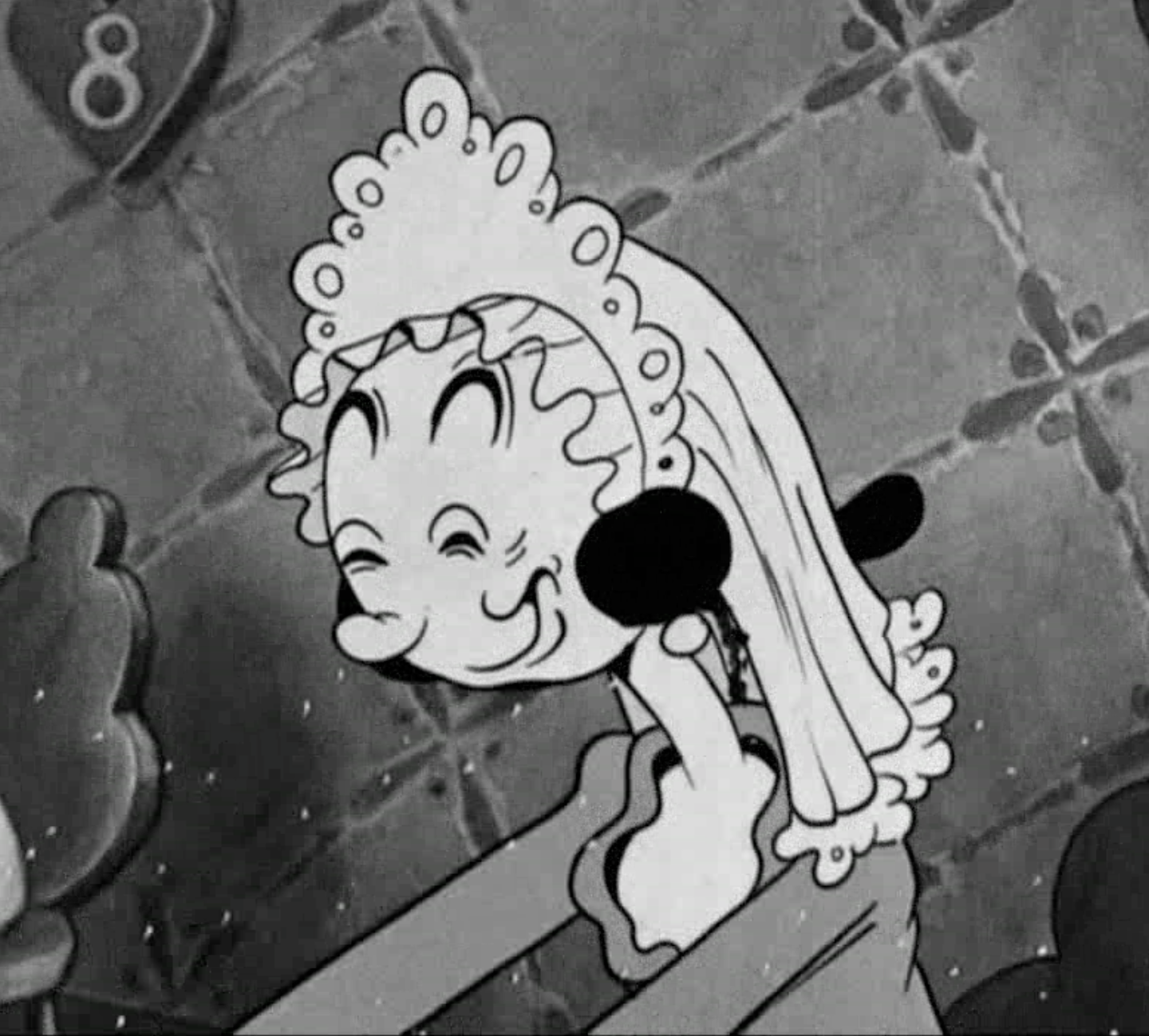 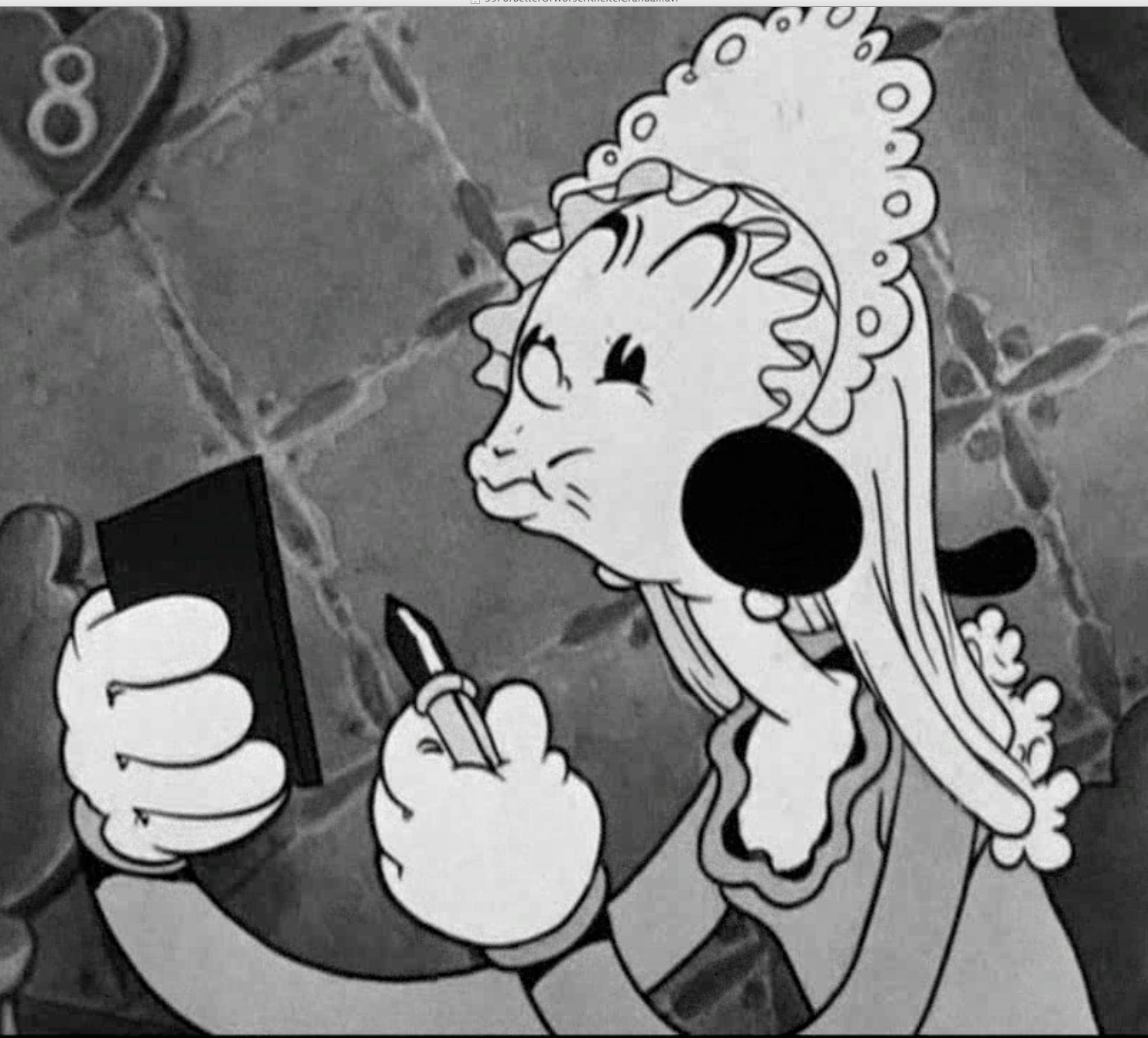 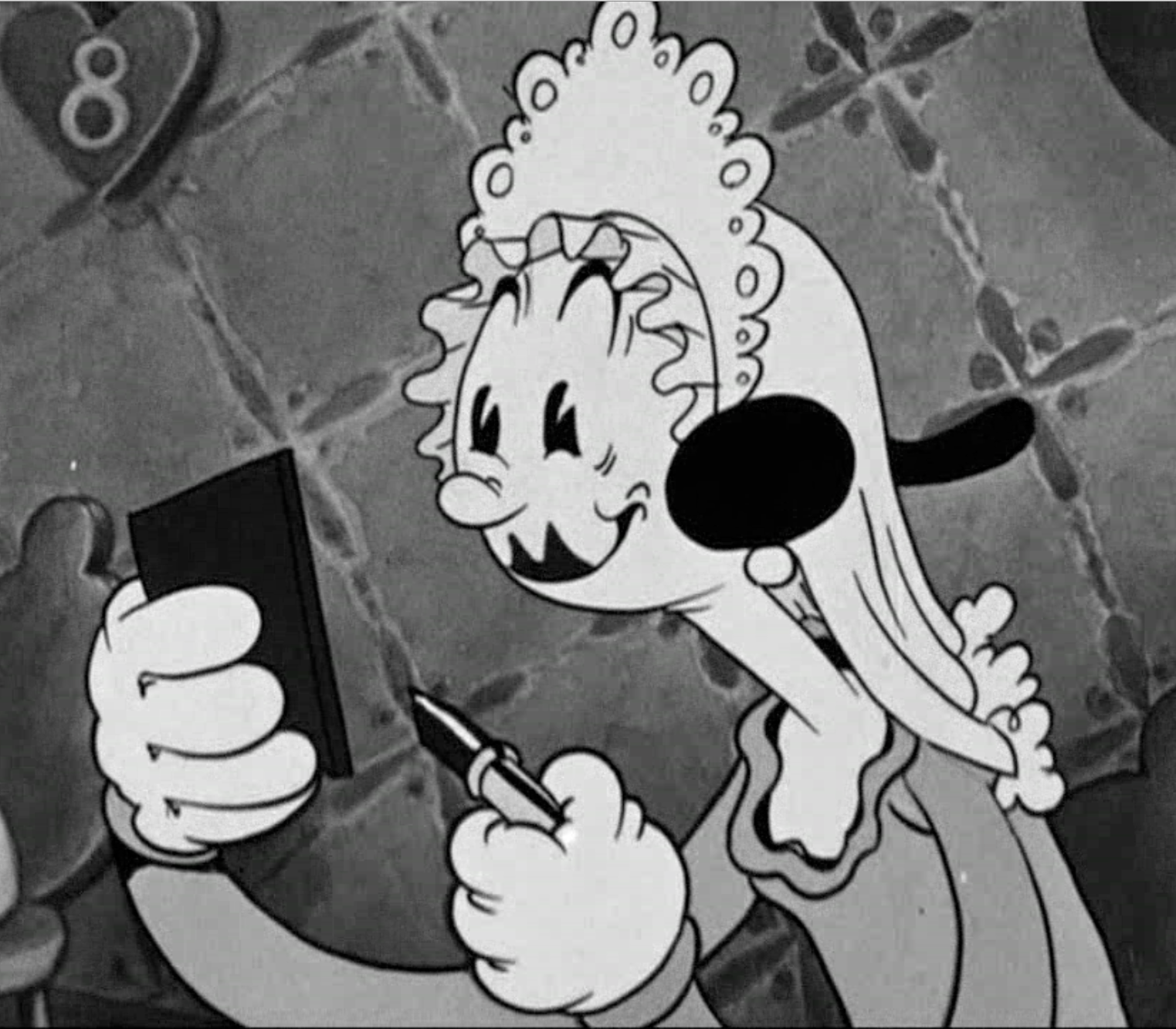 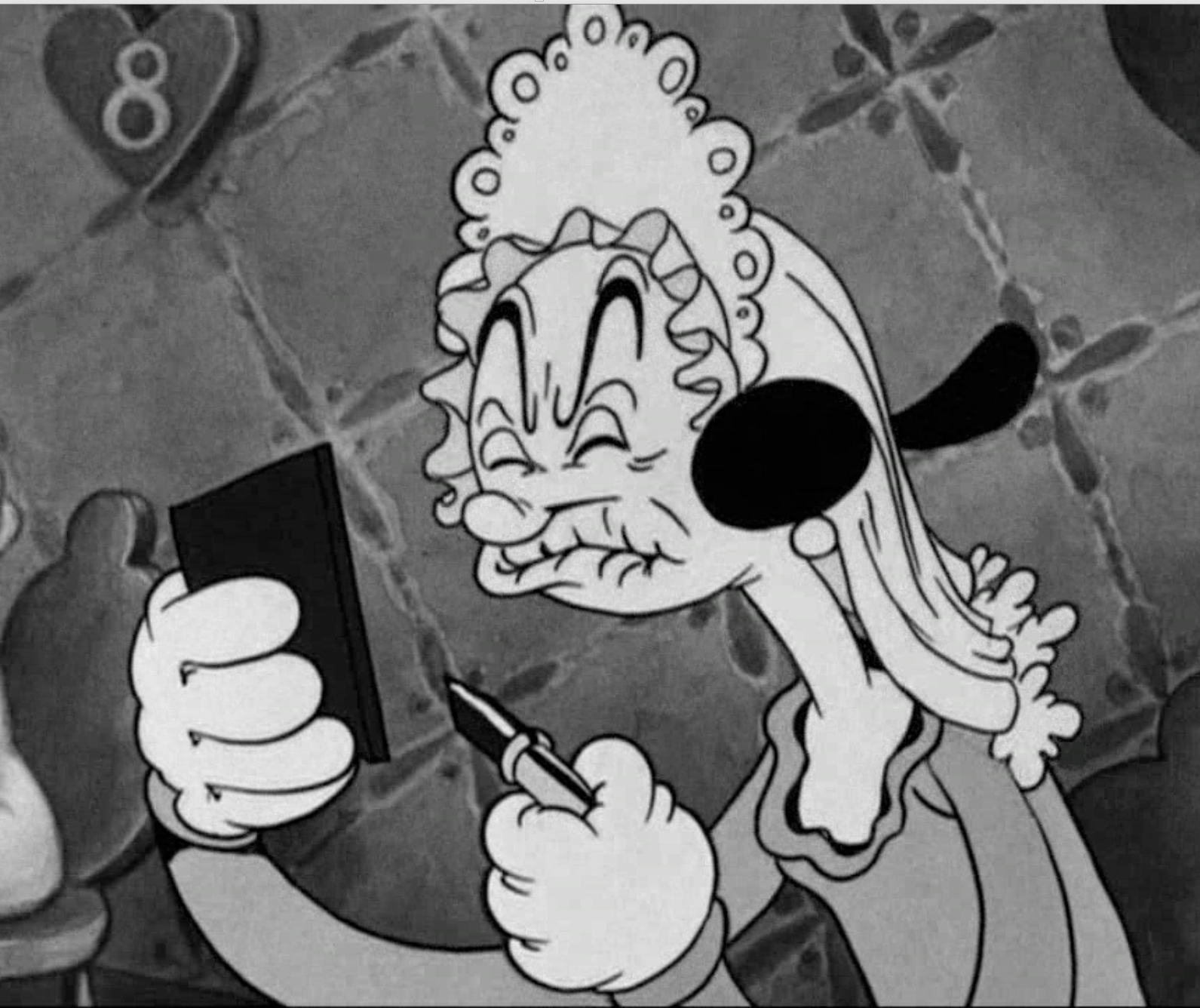 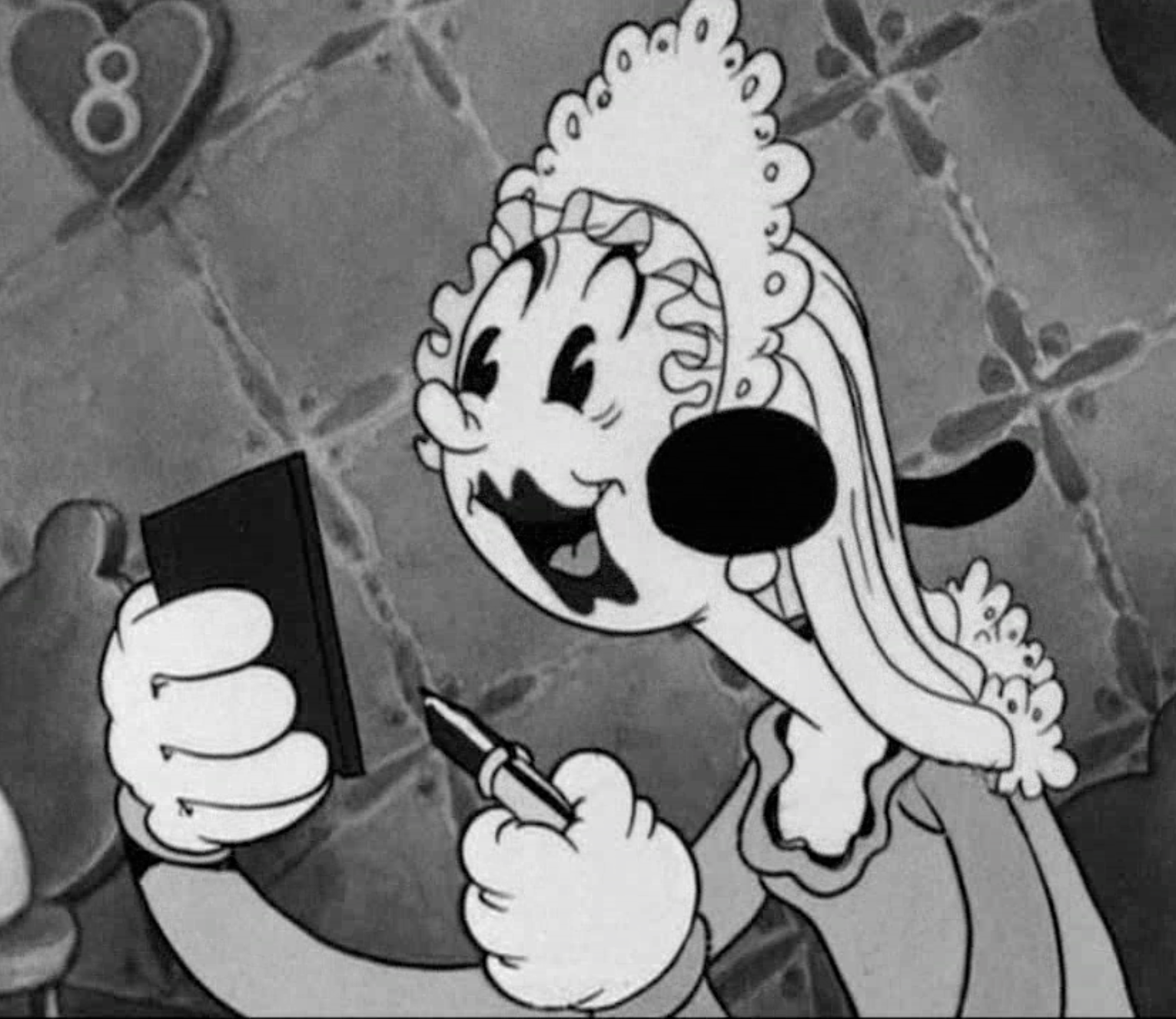 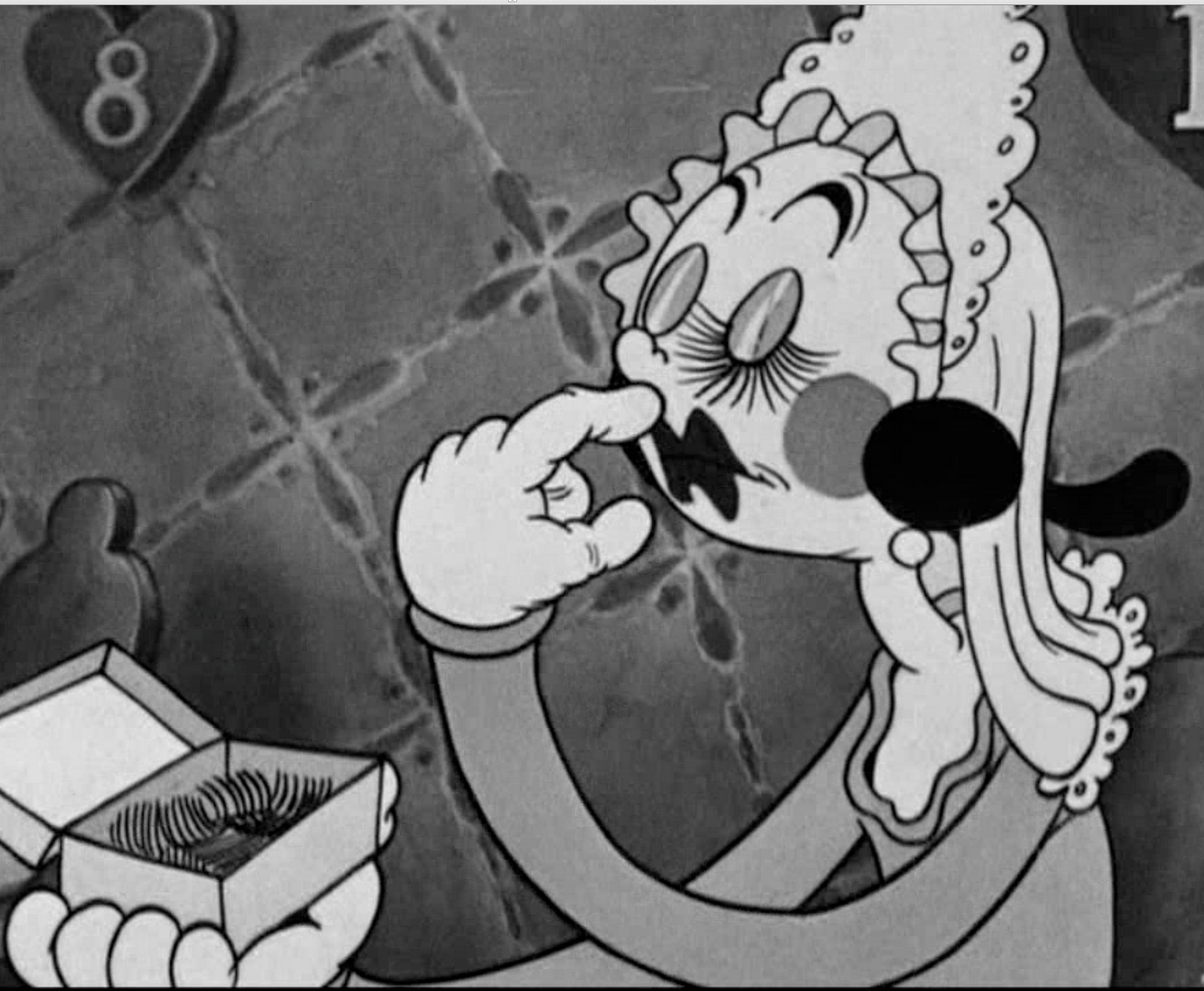 This is probably my favorite of my many favorite cartoons from the first Popeye series of  the early 1930s. Long ago, my children got fascinated with these (they came on TV at about 5:30 in the morning, so I  videotaped them and we watched them together), and at one point I sent my 8-hour collection someplace to have them transferred to DVD. I never saw them again. But a few years ago, I happened upon a cleaned-up, pristine, re-released boxed set and was in Popeye heaven. I was a bit surprised to see these in glorious black and white, as the ones we saw back in the '80s were in colour. Later I found out they had been sent to Korea to be badly colorized, probably by Ted Turner. (Why Ted Turner was forgiven for all that atrocity amazes me, but he was, and his name now proudly stands for Turner Classic Movies, a bastion of cinematic purity with no interruptions, no edits and no commercial breaks. How did he pull that one off?)

Considering what an adorable creation Eugene the Jeep is, it surprises me that Fleischer only used him in two cartoons. In this one, he rescues Swee' Pea from certain death by taking Popeye on a wild Jeep chase. The second one just doesn't have the same charm. In the kind of cruel boondoggle I came to expect as a sullen, embittered little girl, the animators decided to un-make him and start all over again, having him delivered in a mysterious box (a gift from Olive - ?) to Popeye's door.

But it doesn't really matter what Jeep does - it's all adorable. He's a sort of magic teddy-dog with the ability to dematerialize, walk through walls and foretell the future. His tail makes a sort of jingly sound, and every so often he goes, "jeep, jeep".  But all this is barely touched on in these two cartoons - in fact, in the second one he hardly has any mojo left at all. .

Like all the Popeye characters, Eugene got his start in the "funny papers", in a highly eccentric 1920s comic strip called Thimble Theater. Popeye was probably the least likely of them to get his own cartoon franchise. Since the Jeep started off as a static comic strip character, the animators would have had very little idea of how he was supposed to move. I think they did a delightful job with him, with his spins and twirls.

This is a particularly neat sequence, and an example of what Fleischer and his animators did best. Labyrinthine chases that double back on themselves are a standard feature, usually involving Popeye risking life and limb. (This is one of the very few cartoons in which he does NOT eat his spinach. Even spinach is no match for the power of the Jeep.)

Though Popeye doesn't eat his spinach, Eugene eats his orchids. I just had a thought as to why he only appears twice. Cute as he is, it would be hard to think up "business" for him. He has to be the centre of the action, with all that spooky magic power, so he can't just be a faithful Jeep trotting along at Popeye's heels. But what sort of action, when Popeye cartoons are usually of the knockdown-dragout variety? Where would Bluto fit in? Or Wimpy, for that matter? Most of the Thimble Theatre characters were dumped when Popeye went animated. For the most part, the whole cartoon series revolved around that eternal triangle: Popeye, Bluto and the raven-haired wench who holds them in her fatal spell.

I just remembered something about this ending, which only appears in the first few cartoons. When we were watching them on VHS tape, we only saw a tiny flash of "something" that looked like an inkwell. The people who colorized the cartoons had so adulterated the animation that this logo almost disappeared, or was reduced to a fraction of a second. So the game was to pause the tape at the exact moment when that frame or two appeared. We also acted out a dramatic version of Barnacle Bill the Sailor, but I doubt if either of them remembers it. Oh, the memories.

Hey, who's flying this thing?

I never should have found it, this planecrashinfo.com site. It's extremely addictive for all the wrong reasons. It amazes me how often disaster is directly caused not by pilot error, but by utter pilot incompetence. Below are two transcripts from the cockpit.

On an Air New Zealand flight to Antarctica, no one in the flight crew seems the least bit concerned that nobody can see anything. The assumed tour guide Mulgrew blandly tells the passengers that they have no idea where they're going, but if he ever figures it out, he'll let them know, because the view of Antarctica is breathtaking. But it's pretty hard to see anything after you've slammed into the side of a mountain. On a Lauda Air flight to Thailand, the pilots receive a dire warning about an equipment malfunction, but dither around endlessly with an instruction manual, doing it "by the book" until the plane eventually stalls, falls out of the sky and disintegrates. None of these pilots have the old-style Chuck Yeager instincts that it took to get a plane and all its passengers through near-disaster. It's sheer hell to send a kid up to do a man's job.

MC   New Zealand 901, maintain VMC. Keep you advised of your altitude as you approach McMurdo..

CA   We're VMC around this way so I'm going to do another turn in.

MU   Ah well, you can't talk if you can't see anything.

MU   There you go. There's some land ahead. 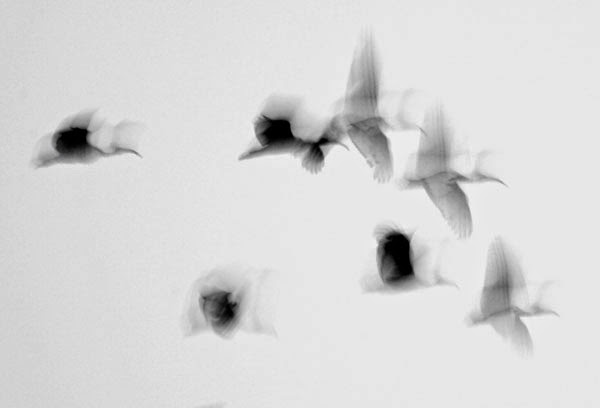 CA   We had a message from the Wright Valley and they are clear over there.

MU  Taylor on the right now.

MU  This is Peter Mulgrew speaking again folks. I still can't see very much at the moment. Keep you informed soon as I see something that gives me a clue as to where we are. We're going down in altitude now and it won't be long before we get quite a good view.

F/E   Where's Erebus in relation to us a the moment.

F/E  Yes, I reckon about here. 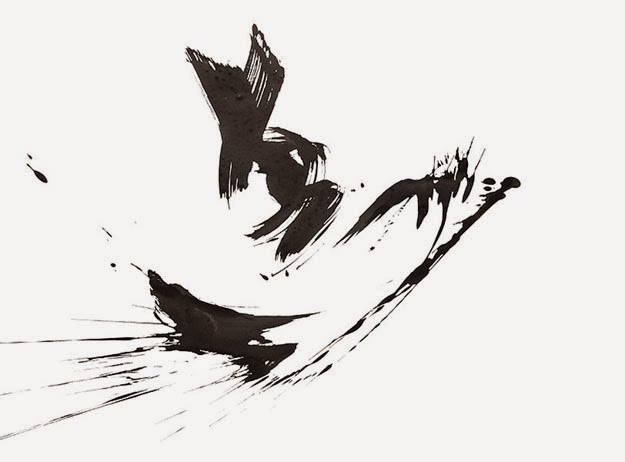 MU  I reckon Bird's through here and Ross Island there. Erebus should be there.

CA   Actually, these conditions don't look very good at all, do they?

MU  That look like the edge of Ross Island there.

CA  Have you got anything from him?

F/O  You're clear to turn right. There's no high ground if you do a one eighty.

Twelve minutes after takeoff the crew received a visual REV ISLN advisory warning which indicated that an additional system failure may cause deployment of the No. 1 engine thrust reverser. No action was taken since the manual indicated "No Action Required". Just before reaching FL 310 during a climb, there was an uncommanded deployment of the No. 1 engine thrust reverser. The aircraft stalled, when into a steep high speed dive, broke apart at 4,000 feet and crashed into the jungle 70 miles northwest of Bangkok. Failure of the reverse thrust isolation valve. Following the accident Boeing made modifications to the thrust reverser system. All 223 aboard killed. 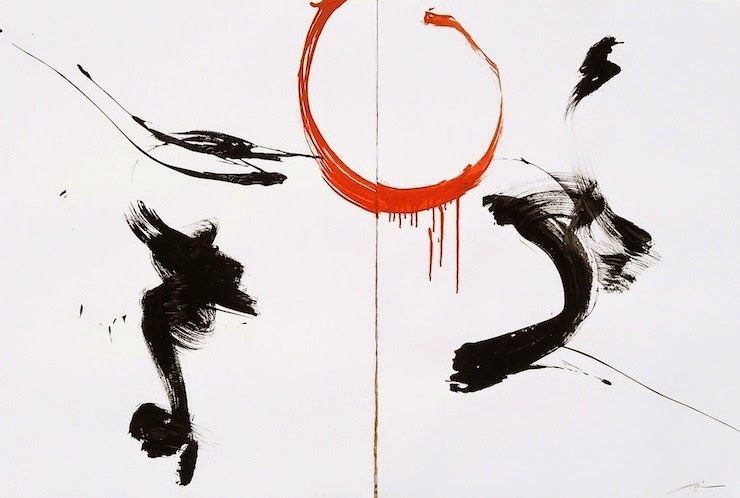 F/O  Shall I ask the ground staff?

F/O   Shall I ask the technical men?

CA  Could be some moisture in there or somethin'.

F/O  Think you need a little bit of rudder trim to the left.

F/O  You need a little bit of rudder trim to the left.

[Sound of siren warning starts and continues until the recording ends]
23.30:53

Posted by Margaret Gunning at 1:49 PM No comments:

Not really MY pet, and I don't think I would want it to be. There would be lots of slime to clean up. I also found a video of a "pet" stick insect as long as your forearm, at least. I don't know. I'm contemplating getting another lovebird. The loss of Jasper hit me harder than I thought, and the house is awfully quiet. My bird feeder hasn't netted much results yet. But not this.

Posted by Margaret Gunning at 11:12 AM No comments: