Don't give me none of your lip: the freaky demise of the Hapsburg Dynasty 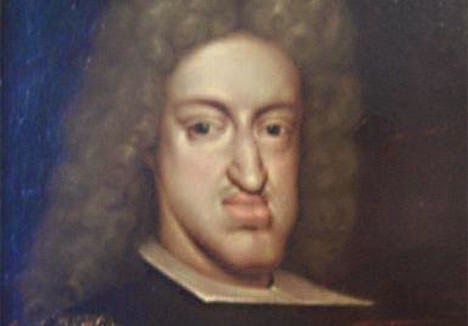 If this guy looks freaky enough to scare the Elephant Man, that's because he is.

He represents one of the biggest genetic train wrecks in human history.

How do I get on to these things, for heaven's sake? I saw a photo of Queen Elizabeth II on the cover of Macleans, a national newsmagazine in Canada. She's on her semi-regular Royal Tour, causing very elderly ladies wearing hats with veils to totter out to the edge of the sidewalk while Liz does her indolent royal wave.

All these people, these royals, and I mean royals all over the damn world, are interrelated. It's scary, but they were bred like horses back then, bred for stamina and aggression and militancy and all those desirable traits.

What stunned me, in looking at the rather hideous cover pic of the Queen in her typical mauve polyester suit and gigantic frothy hat, was how much she is starting to look like her husband, Prince Phillip. 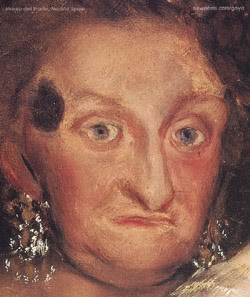 It's bad enough that Prince Charles now displays all the worst attributes of both his parents: long horsey face, thin sharp nose, bad teeth, and eyes set too close together. And worse somehow, that William and Harry, who used to have so much glamour and seemed to have broken the family curse for ugliness, are already starting to look too royal for comfort. Even Harry, long rumoured to be the offspring of Diana's illicit affair with her riding instructor, has the long razor nose, the close-set eyes and the vulpine Windsor smile.

OK then, this is a very long way around my topic. In googling around to get more info on royal intermarriage, I struck pay dirt: an article in a New Zealand newspaper called "The inbreeding that ruined the Hapsburgs". 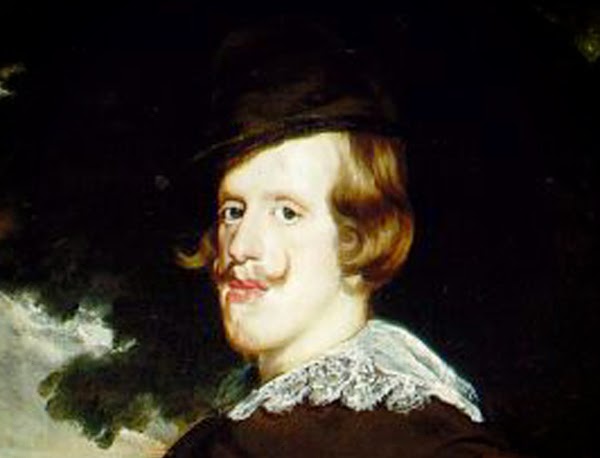 "The Hapsburg dynasty (more correctly spelled Habsburg, but that's too hard to pronounce) was one of the most important and influential royal families in Europe dating back more than 500 years and producing rulers in Austria, Hungary, Belgium, the Netherlands and the German Empire."

These people might as well have all lived in one country. They were their own brothers and sisters. Generation upon generation of harrowingly close genetic unions gradually produced a host of medical problems, but since nobody knew what the fuck was going on, the political alliances based on blood continued, until. . . 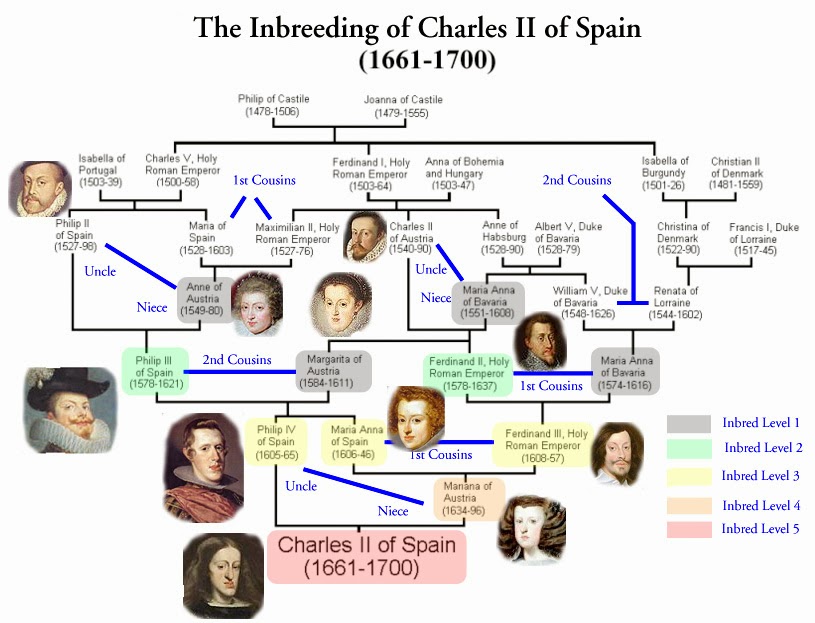 Until Charles II of Spain, a monstrous bundle of mistakes who limped through a short life, unable to reproduce because he didn't know one end from the other. Fortunately, he was the end of the line for the Hapsburgs in Spain.

This guy lived around 1700, when every malformation was seen as demonic. And boy, was this guy demonic. Even royal portaits like the one above (and remember that these portraits had to be flattering, or the artist would literally lose his head) revealed a freakish person with a huge head, jutting jaw, small insectoid eyes, and what became known in history as the "Hapsburg lip". 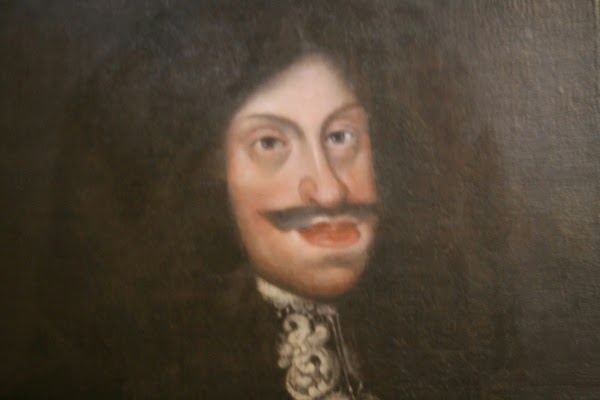 This has nothing to do with back-sass, or even lips, but the extreme forward set of the jaw, so extreme in poor Charlie's case that he could barely talk and couldn't chew his food. It went well beyond the typical Hapsburg "power pout" which until that point was seen as a mark of distinction (sort of). His development was so retarded that he couldn't speak until he was four, couldn't walk until age 8, and remained what was then called an imbecile, barely aware of his surroundings. He was kept in a sort of pupa for a few decades in the feverish hope that he would produce an heir. The relentless and horrific centuries-long mass of genetic deformities finally collapsed like a row of dominoes. Charles turned out to be the last of the Spanish line.

Scientists have tried to figure out his "inbreeding coefficient" and all that jazz, but suffice it to say it was ten times normal. Like the song says, he was his own grandpa: 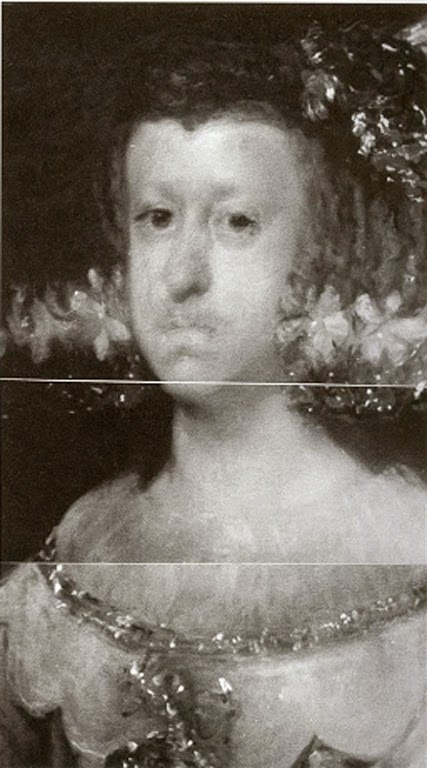 It would have benefited the poisoned gene pool of this dynasty to introduce the blood of some commoners, but they wouldn't have it. Convinced that interbreeding was the road to greatness, they manipulated alliances between uncles and nieces and cousins and half-siblings  (who must've started reproducing at 12), ignoring the fact that all these folk were beginning to look mighty peculiar.Not to mention similar.

All this is odd, when you think about it. Through most of human history, people lived in little villages and never went anywhere. Inbreeding was a certainty, so why didn't the race die out like poor, impotent, imbecilic, drooling Charlie? 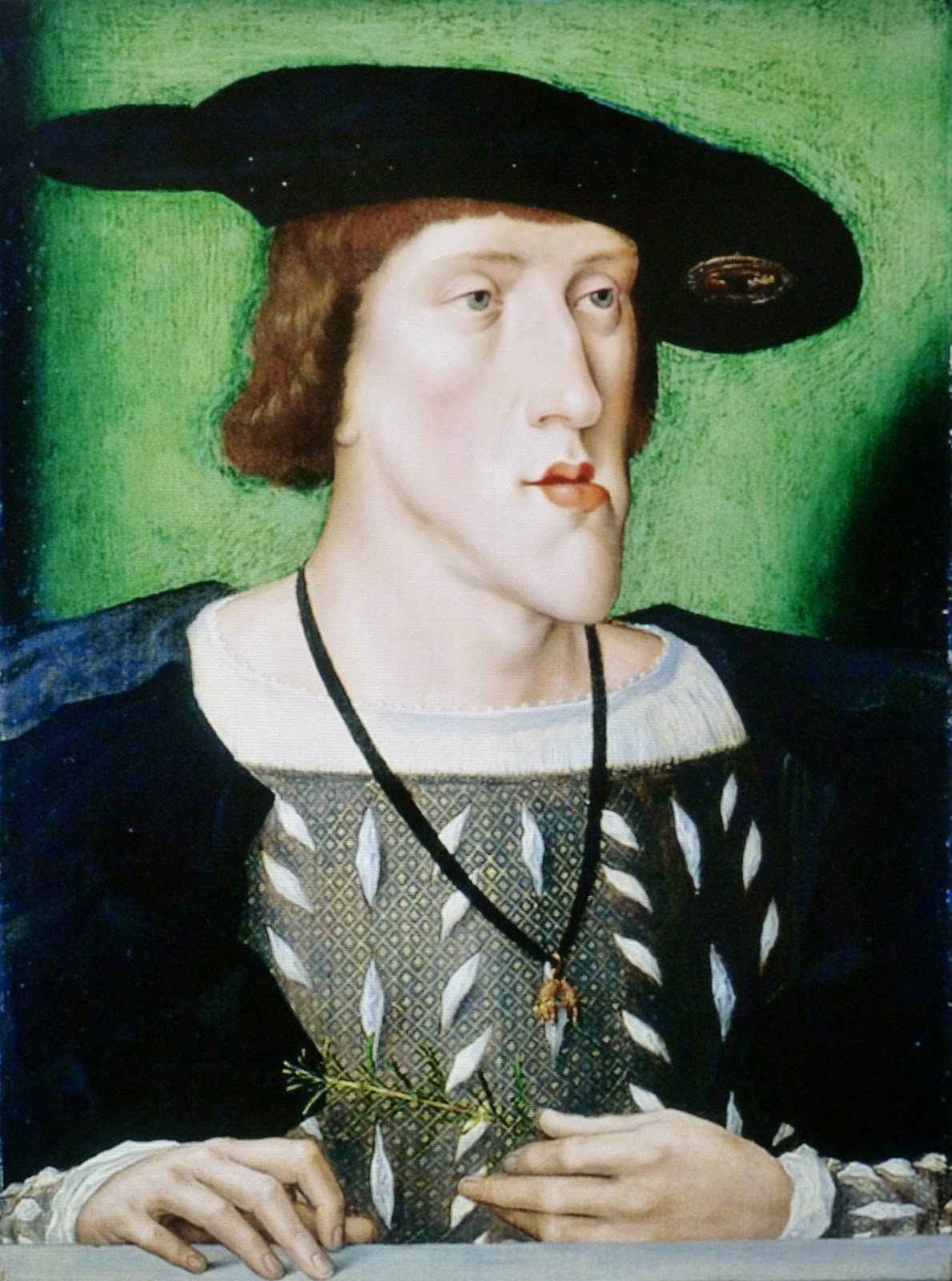 Is this the real reason why famous explorers struck out, going to ludicrous extremes and taking risks that only a madman would take?

I have often wondered if the explorers we know about, Cortez and Champlain and all dem guys, only represent the tip of the iceberg, the more-or-less successful ones who then established colonies in the New World. How many tried and failed, and never made it into the history books?

Lots, probably. But something in their genetic code was saying, "Get out, get out! Get OUT of here before you end up with a chin you can set your coffee cup on." 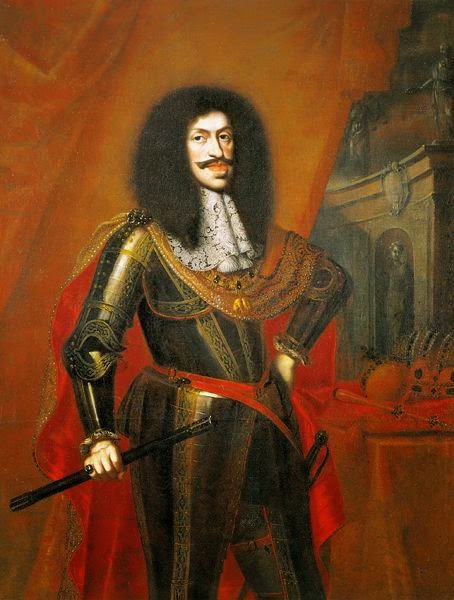 Genealogy and mitochondrial DNA testing is all the rage now, with people anxious to find out they're related to Ben Franklin and Joan of Arc and such. Nobody wants Joe Blow the average schlub as the patriarch of their lineage, but in most cases it's probably true.

We can rest easy, however, in that none of us is related to Charles II, whose DNA coils were as damaged as a Slinky that's been run over by a Mack truck. 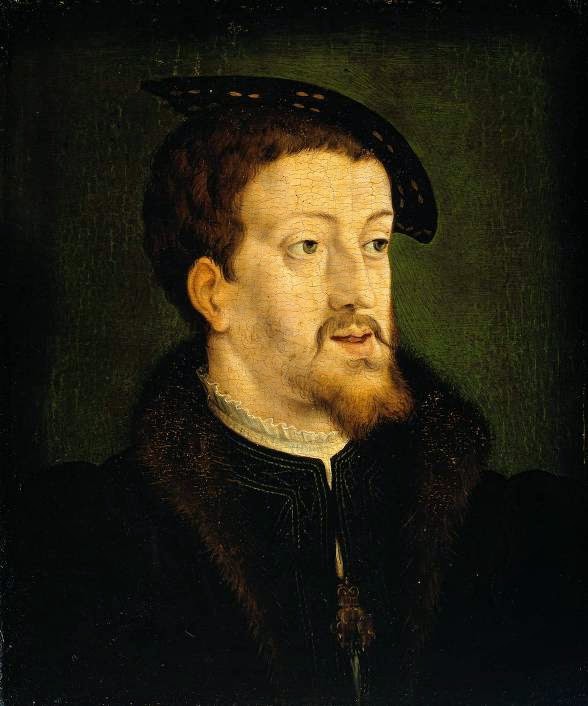 NOTE. This is a summer repeat, cuzzadafact I don't feel like writing today - hey, summer's half over and I want to go buy some watermelon. I've also added a lot more illustrations: my blog was limited when I began, or perhaps ***I*** was, and didn't know how to manage photos. But this is a topic worth revisiting for its extreme icky-squicky factor. What's so astonishing is the ignorance of the people involved, the way they kept on relentlessly boinking their ever-closer relatives and producing children ever-more-ugly-and-enfeebled. Finally the problem solved itself when the last of the male line collapsed in a heap of genetic mistakes. 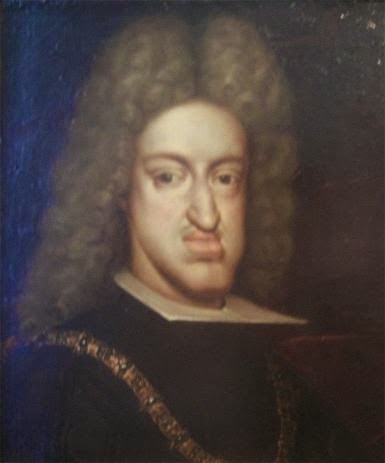 And here's a bonus, gleaned from some-site-or-other, one of those Really Pompous Historical Ones:

"Charles II is known in Spanish history as El Hechizado ("The Bewitched") from the popular belief - to which Charles himself subscribed - that his physical and mental disabilities were caused by "sorcery" rather than the much more likely cause: centuries of inbreeding within the Habsburg dynasty (in which first cousin and uncle/niece matches were commonly used to preserve a prosperous family's hold on its multifarious territories). Charles' own immediate pedigree was exceptionally populated with nieces giving birth to children of their uncles: Charles' mother was niece of Charles' father, being daughter of Maria Anna of Spain (1606-46) and Emperor Ferdinand III. Thus, Empress Maria Anna was simultaneously his aunt and grandmother."


"Still, the king was exorcised, and the exorcists of the kingdom were called upon to put straight questions to the devils they cast out. His great-great-great grandmother, Joanna the Mad, mother of the Spanish King Charles I who was also Holy Roman Emperor Charles V - became completely insane early in life; the fear of a taint of insanity ran through the Habsburgs. Charles descended from Joanna a total of 14 times - twice as a great-great-great grandson, and 12 times further..."


"Towards the end of his life Charles became increasingly hypersensitive and strange, at one point demanding that the bodies of his family be exhumed so he could look upon the corpses. He reportedly wept upon viewing the body of his first wife, Marie Louise." 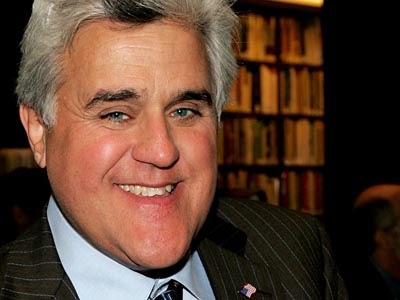 UPDATE! I just received a tip-off from a reader about the Crown Princess of Sweden, who is looking suspiciously Hapsburg-y in the chin area. Well, I looked her up, and my God. . . 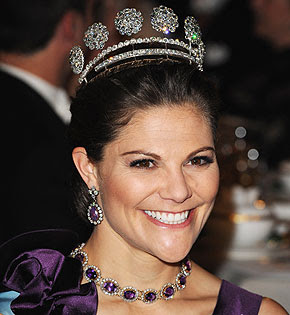 Pray for her children.