The Donner Party Movie: worse than the restaurant

24 of 26 people found the following review helpful
1.0 out of 5 stars Defamation,
By
Mick McAllister - See all my reviews
(REAL NAME)
Verified Purchase(What's this?)

This review is from: The Donner Party (DVD)

It's hard to come up with a single positive thing to say about this miserable, nasty film. It was shot at Truckee (Donner) Lake, but the photography is so mediocre that even this doesn't count for much.

As for the story: It doesn't merely "stray from the historical record," it invents malicious lies about people who deserve better. As one of many examples: In the film, Bill Eddy is depicted as a selfish hoarder who refuses to share with the rest of the suffering families. In fact, the opposite was true. Eddy's entire family died, in part because he foolishly shared food with people who, when the time came, did not reciprocate. Never mind that none -- not a meager few, but NONE, not even the least friendly -- of the historical records agree with this bizarre assassination of Eddy's character. Eddy is depicted as the paid leader of the party, when in fact his was merely one small family among nearly a dozen. This would not be significant, except that "Mr. Foster" (who is depicted as the financial and spiritual leader of "the Donner Party" for reasons never explained) berates Eddy for taking money to lead them and then causing the disaster of their entrapment in the Sierras. 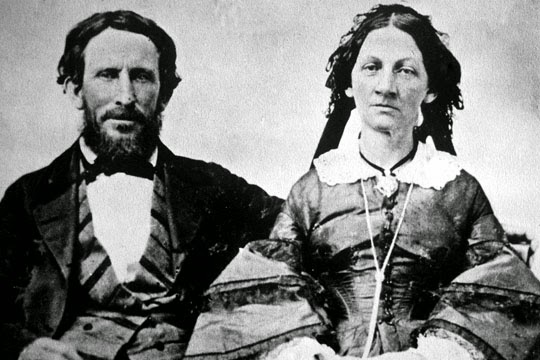 Foster, of course, was a minor player, a son-in-law of one of the older women, not the central figure of the group. The film goes on at great length about Eddy's refusal to share a cabin with the "Fosters" (actually the Murphys) when in fact Eddy DID share a cabin with them. But that's only the beginning, as far as twisting the facts is concerned. The Donners, the Reeds, and the Breens, making up 70% of the camp population and the real leadership, are simply not present in the film (except for one reference to the "30 people" left behind at "the Donner camp"). Will McCutcheon and Milt Elliot (two singularly different people) get conflated into one character, and then killed off in his first scene. Eddy finally makes it to help by abandoning the rest, who end up killing each other in a squabble. 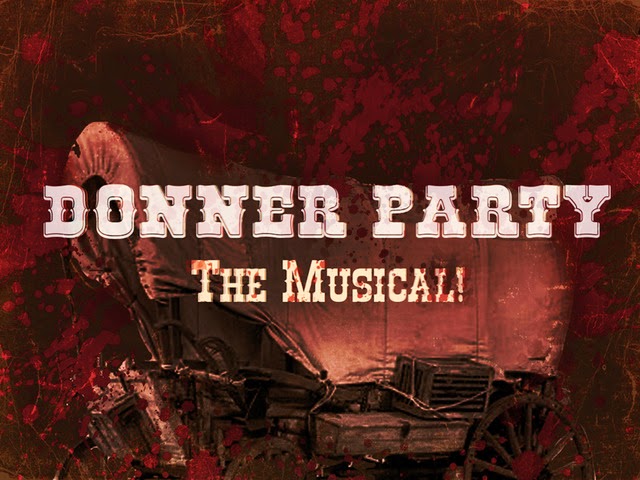 So it's fiction, tricked out with historical names for no discernible reason. As fiction, it doesn't fare much better than as history. The viewer is faced with some problems that didn't need to be there. First, the cobbled-up "cabins" that we see from the outside (one appears to be bedsheets on a clothesline), turn out to have interiors that would have been spacious living quarters in the era, complete with tables, lamps, and dinnerware. Second, in the spirit of casting perversity, the characters are all plump, round-faced, and obviously well-fed (and at least three of the men appear to have made their careers on the strength of their resemblance to William Peterson), so the jawing about hunger is no more convincing than Mrs. Quayle's appeal to her missing lunch. For reasons no one explains, the "Forlorn Hope" carries the snowshoes they made so laboriously instead of wearing them; no, I did not make that up. There is one brief scene, a few seconds long, around the middle of the hour-long depiction of the trek, in which they wear them. However, they do frequently use them as walking sticks. And the "handmade" snowshoes, by the way, are beautifully crafted top-of-the-line REI specials. 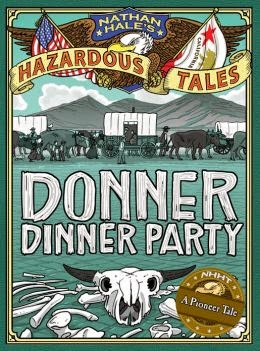 Of course, the "money shot" in the story is the cannibalism (which is, frankly, the least interesting element of the real story of the Donner Party), and they even manage to botch that. The moment they run out of food, someone says, "Well, I guess we'll have to eat each other," and they immediately begin working out the details. The tone is almost, "Well, I'M not missing lunch!!" Suffice it to say that the details end up being a brave soul marching out into the snow so another brave soul can shoot him. Then a character who borders on obese (who cast this thing?) kills himself to add to the ham stock. By the time they get to "Sutter Fort" (they can't even get that right), they have killed four members of the party and chewed on some chunks of what looks like thawed chicken breast. We should be grateful, probably, that the producers couldn't afford "special effects."

Watching this film, with its dopey, stilted dialog (everyone refers to everyone as "Mr." and "Mrs.", even while chowing down on the addressee's spouse), its bizarre culture fantasies (on at least three occasions, husbands put their uppity wives in their place, once with the threat of a backhand, and the group spends as much time praying as they do marching), the cheesy cost-cutting (there is no blizzard, and the snow is at most a few feet deep), and its garish insincerity (much is made of the common humanity of the Indian "Louis," but the actor playing him is not listed in the credits!), I have to think that "straight to disc" is too good for it. What were they thinking?

Help other customers find the most helpful reviews
| Permalink


Hoo-eee! It's American History time, folks, and this Amazon customer review of the ludicrous straight-to-video fiasco The Donner Party is probably a lot more entertaining than the actual event. (I mean the movie, of course.)

What brought this on? I phrase it thus on purpose, as if I am trying to trace the source of some vile illness. Something - oh, it was Matt Paust, not "something", and his close, perhaps too-close association with the Jamestown famine/massacre in Virginia back in 1609 - triggered a re-fascination with the Donner Party. A revisiting. Nice to know that cannibalism had a precedent in the annals of Americana, but the Donner story is so much more dragged-out, so forehead-slapping in the sheer incompetence and hubris of those who felt they could take an untried, impassible shortcut to get to the Promised Land in California.

So somehow that led me back to a documentary that I find almost dangerously enthralling. It has been aired on PBS several times, then I bought the DVD and watched it some more, then I lost it - the DVD, I mean, though the story brought me near that point. If you're a serious Donner buff, don't miss this thing, because I guarantee that if you watch 10 minutes, you'll be stuck for an hour and a half.

I know because I did it again last night, on YouTube, and did not get to bed until after 1:00 a.m. Was this the third time through, or the fourth? I wasn't even aware until now that this film, written, produced and directed by someone named Ric Burns, was made 22 years ago.

The low-key presentation and narration combined with vintage photos of people who look as if they are half-demented contribute to an atmosphere far more macabre than sensationalism would provide. (In fact, I did not notice until today when I attempted to make a few gifs that virtually the whole thing is made up of still pictures and narration, with none of the ludicrous "re-enactments" that make some documentaries so detestable). We can't let our minds go there, and yet we can't stop. As with Lord of the Flies, civilized behaviour soon begins to fray around the edges before becoming completely unstuck. The party is frighteningly inexperienced in meeting adversity along the trail and seems to think the experience will be a smooth scenic ride with the oxen doing all the work. None of them knew how to build a weather-tight cabin or even a proper tent, rations were lamentably short (four months' worth for a trip that lasted twice that long), the livestock RAN AWAY for some reason - had they not heard of ropes, did they not realize they'd have to eat them later? - and in fact, unlike the local natives, they did not seem to know how to dry strips of meat (let alone strips of people) so that they could put something by for the even-worse times ahead. So impractical were they that they ate the leather laces holding their snowshoes together, so that they flailed helplessly around in the nine feet of snow that held them captive all winter. 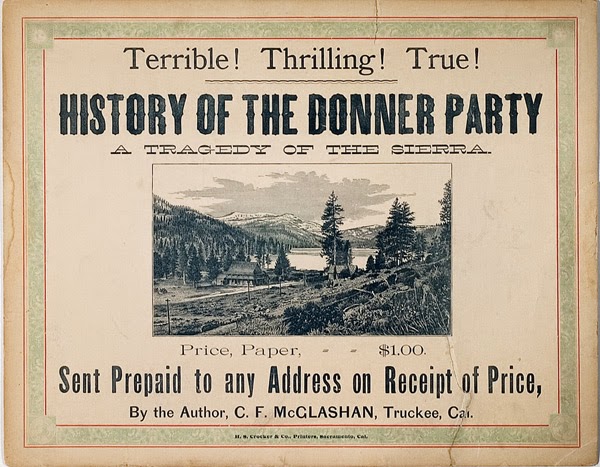 Back when I had that disastrous Open Salon blog that ended so badly when I realized it was just an I'll-scratch-your-back-if-you'll-scratch-mine sham, I think I did try to address the Donners, no doubt after a viewing of the same documentary. And I swear, when looking up suitable images, I saw signs for a Donner Party restaurant. But now I can't find a single trace of one. I can see it being shut down by historians quivering with indignation, but wouldn't there be SOME remnant, at least a photograph?

People have squeezed a lot of mirth out of the Donners, most recently Jess Walter in his delicious novel Beautiful Ruins. I had a little problem with the over-the-top humour of something that has already been done (a crappy movie about the Donners). But the thing is, you don't need to stretch the facts in this story. It is so unbelievable that it can only be true. The fact that roughly half the 80-odd pioneers squeaked through this ordeal attests to the importance of body mass and a taste for steak tartare.

(The fateful turnoff. Go right, young man - go right! But it didn't work out that way. Insisting on taking a hard left, the Donners found themselves on the road to nowhere.)

Posted by Margaret Gunning at 11:58 AM No comments: