Where do these things COME from? you may ask. You may ask, but I can't tell you: perhaps from this non-standard-issue bipolar brain, where air bubbles sometimes pop to the surface like when your hamster has a big drink. At any rate, I had just finished pasting together some more Harold covers for Facebook - and why I think this will make a rat's ass of difference to book sales, I don't know, because I seem to be lousy at book sales and great at loving Harold - and I was listening to music, first Mahler's 1st "Titan" Symphony conducted by Zubin Mehta, putting my head down and sobbing at the end like always, then Frankie Valli and the Four Seasons singing I've Got You Under my Skin (a magnificent and somewhat symphonic work), and just as I was looking up at the clock and thinking, Damn, I've got to go to bed, a thought popped into my head unbidden:

A chocolate record that plays. 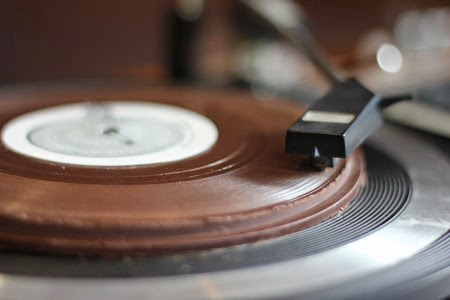 You just have to watch it. The guy is a genius. Like Edison, he tries and fails multiple times, but keeps getting Ideas like those light bulbs going off over people's heads in the old comics.

Why does all this happen so late? Why at all? I am haunted by a comedy sketch I saw on TV years and years ago that I swear wasn't Monty Python, but had the same flavor to it: there was a giant record lying on the ground, and someone with a needle ran around and around and around it, playing it. 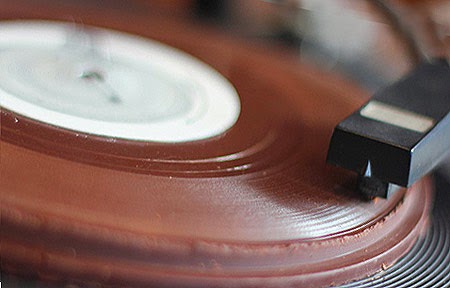 Vinyl is now considered eccentric, exotic, something collected by people who live in the basement and still use VCRs. But record culture was around for a very long time, and it left traces on the language. We still say "he sounded like a broken record" and "groovy" (though that may have nothing to do with records). The sound probably was better, and those covers. . . Sikora's in Vancouver has a window display of vintage record jackets, most of them classical, really striking and fascinatingly hokey, and I remember we had many of them, they're stuck in my mind forever. They were part of the record-owning experience. And the liner notes, remember those? And double albums, like getting two Christmas presents instead of one. Now CD covers have these puny images, flyspeck type, and people have stopped buying them anyway. We've lost touch, there is no longer any physical attachment. We're awash in "images", not pictures, and sound that is so super-boosted it no longer sounds very human. 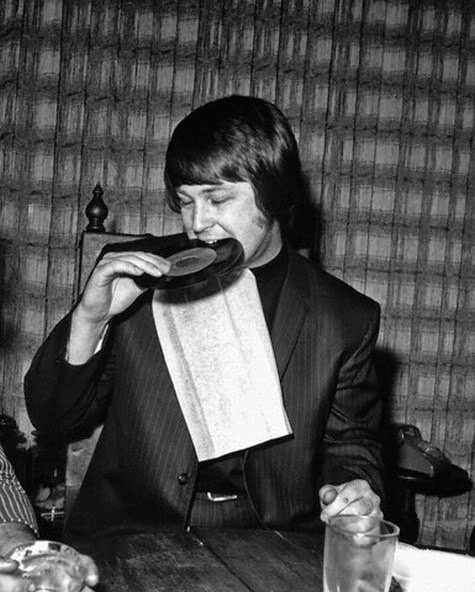