Softness in his eyes, iron in his thighs

Nature's mistakes: oops, I did it again

Be aware that I don't choose these things. In my never-ending thirst for knowledge, they come to me, attracted, no doubt, by a mixture of curiosity and disbelief.

This thing, this, I don't know, this whatever-it-is, like a shrimp shell with fur, or a hamster trick-or-treating in a lobster suit,  it scares me to think that these things are scampering around, apparently cute except for the four-inch talons that could probably rip your throat out if you looked at it wrong. It was hard for me to believe it was real, so I had to dig around for more images, sort of like turning over rocks in your back yard to see what slimy things you can find. 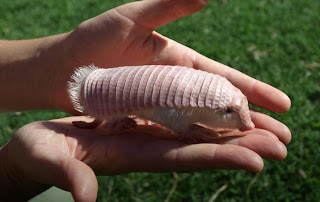 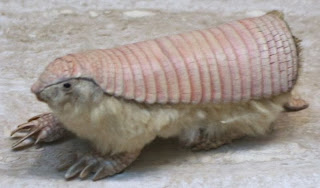 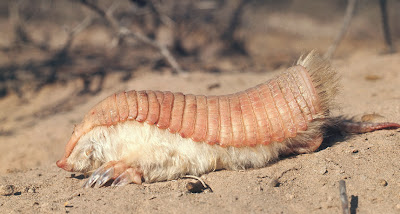 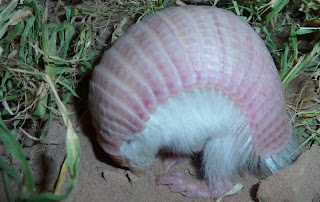 The larval form. Just not possible, whatever it is. Then I found one that moved. . .

These must actually exist, then, or else animatronics has been taken to a level far beyond what I imagined. This primitive, struggling, fur-clogged thing, this thing that looks like it should have died out millions of years ago with the trilobite (in fact it even looks like a trilobite) is an animal so primitive, so small-brained, so stupid, that when you lift it off the ground it keeps working its feet because it thinks it's still walking.

OK, so having proven it exists and isn't just some taxidermic nightmare, I had to Wiki it (my main source of knowledge because I am incredibly lazy), and found the following:


From Wikipedia, the free encyclopedia
Jump to: navigation, search
The pink fairy armadillo (Chlamyphorus truncatus) or pichiciego is the smallest species of armadillo (mammals of the family Dasypodidae, mostly known for having a bony armor shell). It is found in central Argentina, where it inhabits dry grasslands and sandy plains with thorn bushes and cacti.

The pink fairy armadillo is approximately 90–115 mm (3.5-4.5 inches) long, excluding the tail, and is pale rose or pink in color. It has the ability to bury itself completely in a matter of seconds if frightened.
It is a nocturnal animal. It burrows small holes near ant colonies in dry soil, and feeds mainly on ants and ant larvae near its burrow. Occasionally, it feeds on worms, snails, insects and larvae, or various plant and root material.

The pink fairy armadillo spends much of its time under the ground, as it is a "sand swimmer" similar to the golden mole or the marsupial mole.[citation needed] It uses large front claws to agitate the sand, allowing it to almost swim through the ground in a manner reminiscent of swimming through water. It is torpedo-shaped, and has a shielded head and back. 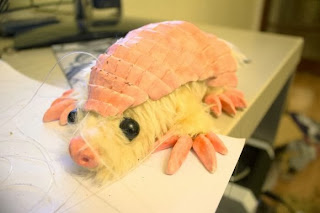 It took me a long time to figure this one out. This isn't a pink fairy armadillo, or any sort of armadillo.  AT ALL. This is some sort of Peruvian jello mold. Take a look at those feet - they're made out of cantaloupe spears. Carmen Miranda could wear this thing on her head! Such internet hoaxes should be outlawed, as they only choke my evenings with dross. 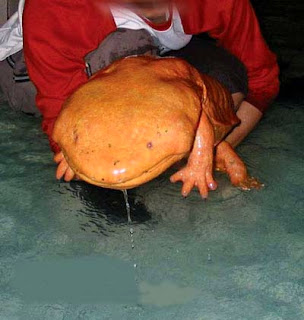 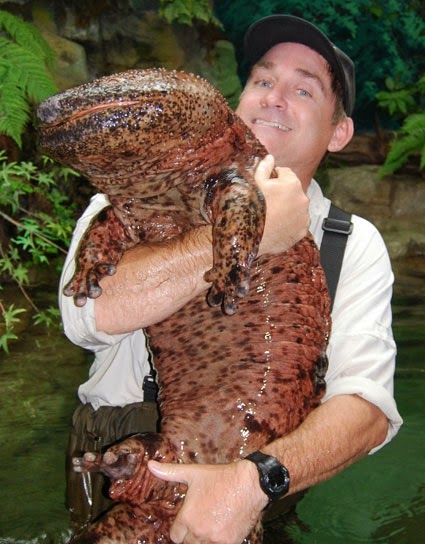 These things are so primitive they haven't changed in a few gazillion years, and were already sliming around (why??) when the dinosaurs roamed. One does wonder, at times, how all this stuff happens, all the different species, some of which are so damned odd, if it's really all due to natural selection or some kind of sorcery. 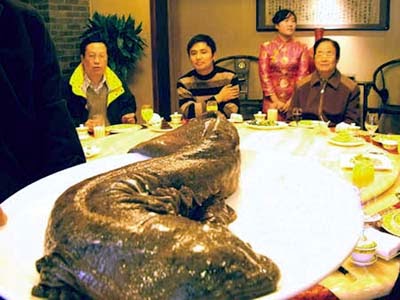 A giant salamander on the dinner table. 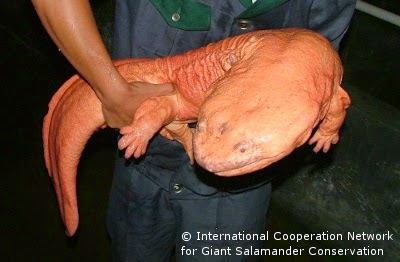 There's even a corporation looking after these guys.

When I was a kid, I always wanted a newt, a toad, whatever I could catch that crawled or slithered. I would have loved to collect a salamander, but I never saw one, just read about them. Now I realize I was saved by the grace of God, by a divine Providence that snatched me out of the path of the Behemoth. What would these things eat? Why do they exist at all? What is evolution all about, and why is ANY of it here, when we started off as nothing?

If the salamander knows, he's not telling us.