That's why she can't get a man! 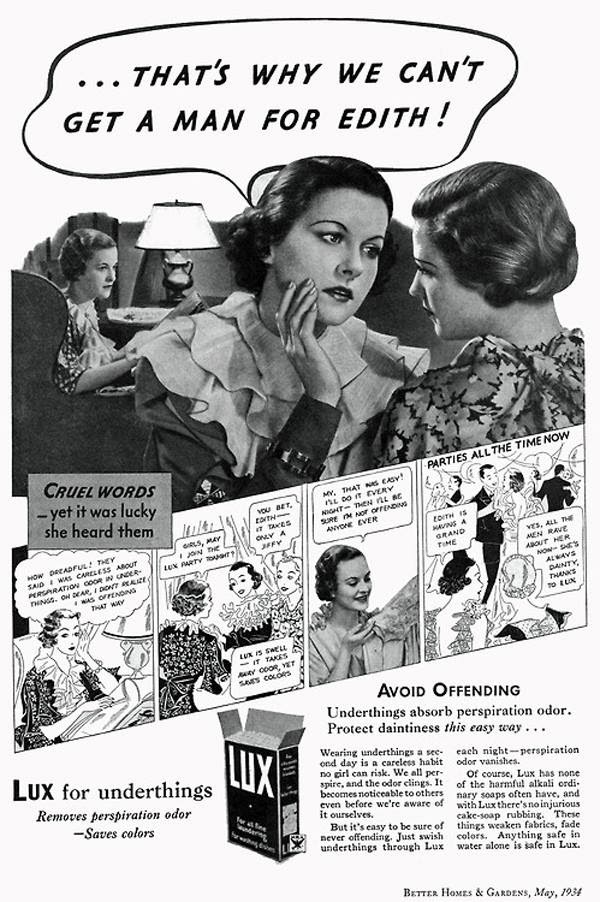 CRUEL WORDS – yet it was lucky she heard them

“How dreadful! They said I was careless about perspiration odor in underthings.

Oh dear, I don’t realize I was offending that way”

(Due to the vicious comments of her friends, Edith sees the light)

“Girls, may I join the Lux party tonight?”

“You bet, Edith – it takes only a jiffy”

“Lux is swell – it takes away odor, yet saves colors”

“My, that was easy! I’ll do it every night – then I’ll be sure I’m not offending anyone ever”

PARTIES ALL THE TIME NOW

“Edith is having a grand time”

“Yes, all the men rave about her now – she’s always dainty, thanks to Lux”

Wearing underthings a second day is a careless habit no girl can risk. We all perspire, and the odor clings. It becomes noticeable to others even before we’re aware of it ourselves.

But it’s easy to be sure of never offending. Just swish underthings through Lux each night – perspiration odor vanishes.

Of course, Lux has none of the harmful alkali ordinary soaps often have, and with Lux there’s no injurious cake-soak rubbing. These things weaken fabrics, fade colors. Anything safe in water alone is safe in Lux. 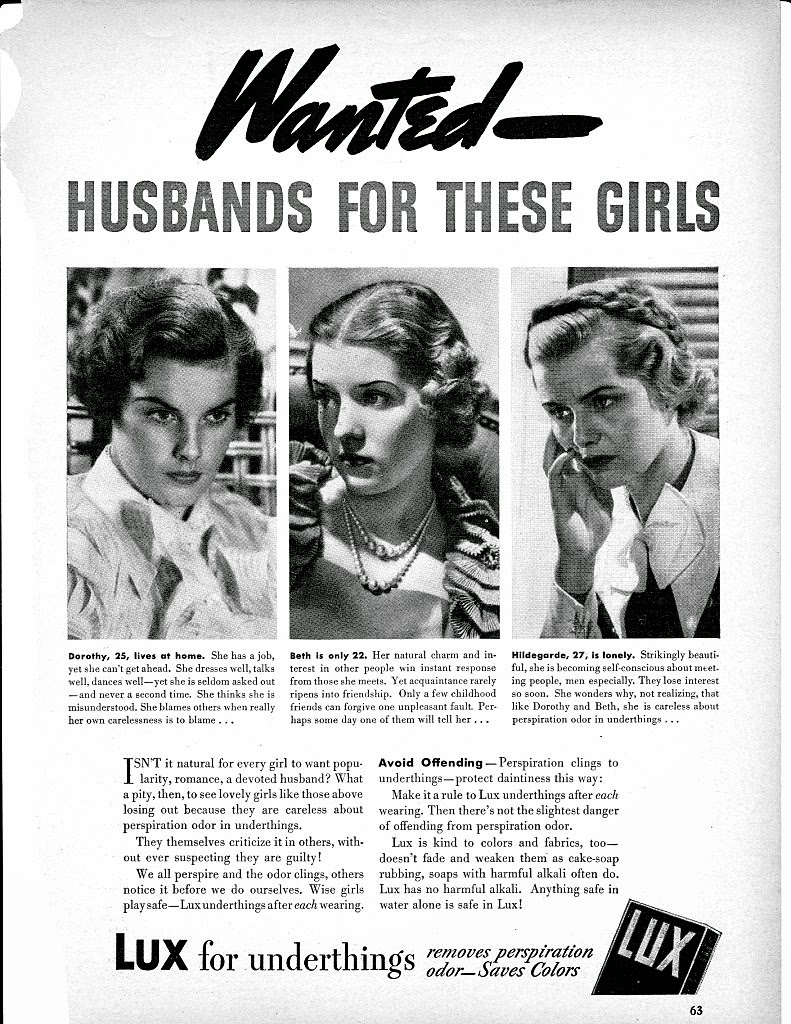 Oh. . . KAY. Now that I've had a chance to absorb all that, if absorb is the right word, I wonder if it belongs in the same category as those awful "can this marriage be saved?" Lysol douche ads.

But when I really look at it, as Lucy would say, "Euuuwwwwwww."

Standards of hygiene really were different then. People bathed once a week, in many cases, and washed their hair once a month (in the sink, then wrapped their head in a towel like a turban). Washers were inefficient, and clothes were dried on a line in the back yard.

So I don't know about this ad. Unless Edith's potential "man" was down on his hands and knees sniffing her crotch, I'm not sure it would be such an obstacle (in fact, I have heard that certain men enjoy such things).

But the ad pretty much states that poor Edith is wearing the same pair of panties (and note how they avoid that word - too sexual?) over and over again. Double-euuuwwwwwwwww.

It's worse than the guy who turns them inside-out and wears them again. 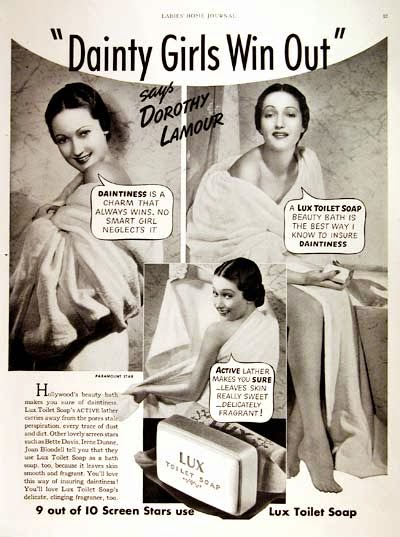 But wait, they do say "underthings", don't they? In the cartoon, she's holding up a slip. I wonder how stinky a slip could be after two days?

The Lysol douche ads were secret code for "birth control douche", which could not be mentioned by law. So  I have a theory this wasn't about slips at all. It's just that they couldn't mention panties. Panties, to my mind anyway, are the only item of apparel that could get really stinky after a day.

So she's swishing her gitch, or gotch, or ginch, or gonch, or gitchies, or gotchies around in warm water and Lux. (To do this, you join with your friends at a "Lux party", which by today's standards is hard to imagine.) The weird thing is that the ad implies you should do this "every night", as if you have only one of everything. So how would it dry? By blowing on it?

Hey, Edith - now that you're so popular because you smell like Lux soap - get one of those boyfriends to come over and help you out.

Posted by Margaret Gunning at 12:09 PM No comments: