(This post originally ran more than three years ago. Since then, a lot has happened - The Glass Character finally saw print! - and a lot didn't. It is of some benefit to realize there was a time, ONLY three years ago, when I didn't think I'd connect with RC at all.  I have his phone number in LA now, which would've seemed like a miracle then. So something must have happened in the interim. But I have no idea if he has read my book, if he even received it. By the way, back in 2011, I could not find a single up-to-date photo of Rich Correll, so had to use these grainy shots from when he was a child actor. I kept them simply because I like them.) 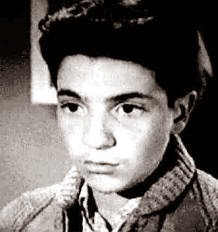 I can remember a time when I wouldn't touch a computer, afraid it would give me one of those searing visible cracks I always get on car doors. (No one else seems to get these, kinda like people whose watches stop for no reason.)

Then I touched one, though I know not when. There was no internet then, just a Tandy computer I lovingly called Jessica, a daisy wheel printer, and a fax machine. I don't remember my first foray into the internet, or even what it was called then. The Information Highway, I think, and if you tried to use it, some techie guy would brand you a "newbie". 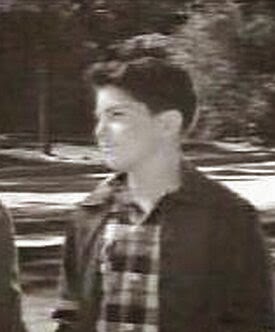 For a long time I was afraid of it and was sure I'd never use it and that it would be daunting and impossible to use and I would feel bloody stupid if I even tried. My kids were printing stuff out on long rolls that you tore off like chunks of toilet paper, with a sort of perforated border with holes in it on the sides. They printed out arcane secret information about the X Files and stuff like that. It was interesting, yes, but intimidating, something for the young.


I don't remember when I found out what a download was, probably last week sometime. I was thrown into the water and swam badly, still swim badly for the most part, but here I am with, drum roll please, not only a web site (which is mostly an ad for my novels) but a blog.


Then, the other day something very strange happened. One second I hated the idea of social networking, knew nothing about it and felt like it was all written in a foreign language, like Armenian or something, then the next second I was "on" Facebook. 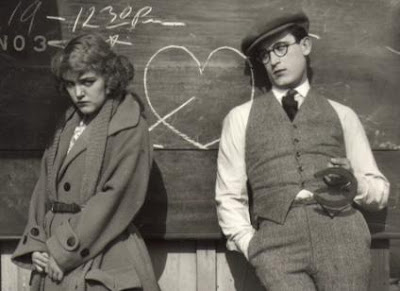 I still don't really know how to use it, because there are no instructions. You're just supposed to know. Once more I have that queasy feeling I got to the party late, too late to ever catch up. But I didn't do it to "network". I did it to find one person.

This person, rare as an exotic deer or a species no one has ever seen before, is so elusive I can't find an updated image of him. These pictures are from his child star days, when he had an ongoing role on Leave it to Beaver. There would appear to be no reliable information for contacting him, just a few wretchedly inappropriate mailing addresses, though the Lord only knows I've tried.

The two-and-a-half people who follow this blog might know that I kvetch a lot about the fact that I've written a novel about Harold Lloyd, the silent film genius, and so far can't get anyone in Canada interested in publishing it. People all over the place are telling me to self-publish, and I don't see how that would work if you had to book your own tours, readings, etc., do all your own distribution and promotion, get it in all the stores and on the net, pay for your own ads, etc. etc. and not go bankrupt. 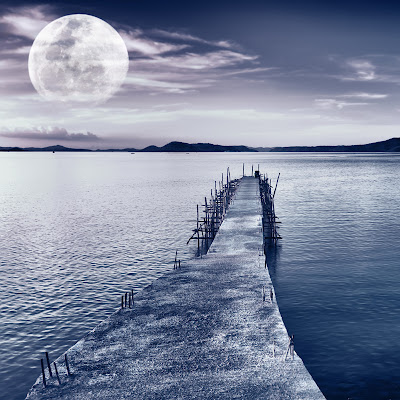 
I thought when you published your book, you made money. Silly me. But there's a book crisis going on, and no one knows quite where they stand. This means everyone's suddenly an expert telling everyone else what they should do. But paper books are  becoming obsolete, which means that the retail chains will eventually close (and let's not think about those small independent stores that have tried to survive a plague of almost Biblical proportions). Most if not all of the publishing industry will exist online. But when you're between systems, it's disorienting. Writers have to scramble, create their own books, or just endure the slammed doors that eventually lead to a bad case of clinical depression.

SOOOOOO,  to get to the actual point of all this, I'm searching for Rich Correll, the Hollywood polymath who co-invented the character/global phenomenon Hannah Montana and who has been directing hit Disney programs (the kind Caitlin slavishly watches) for years. He has done, and is doing, tons of other stuff in the industry as well, but that's not the real reason I'm looking.

I want to find Rich Correll because he was like a second son to Harold Lloyd: he knew Harold Lloyd, he loved Harold Lloyd, and he just strikes me as someone who might actually be willing to help me realize this labour of the heart, or at least to understand why I did it, and why it means so agonizingly much to me. 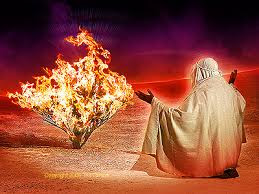 Or not. Maybe it'll just be the usual best of luck with this I've heard every other time I've made a "contact", which as far as I am concerned means about as much as a Facebook "friend".  Hard to say. Maybe he's too busy suing the Disney Corporation for $5 million (and imagine suing Mickey Mouse! This is both quixotic and admirable.) I don't know. I just feel at this point like I need to talk to someone who loves Harold Lloyd as much as I do.

It's funny to be in this position now. Everyone seems to be saying, "Accept less." Or even "give it up, it'll never happen". I know I can do this, I know I will do this, but I'm lost in a labyrinth. For this reason, to try to find Rich Correll whom I've been tracking like a bloodhound for months, I joined Facebook and found myself, once again, a stranger in a strange land.

As usual, as with everything I have ever done, I feel like a complete outsider. Some of my "friends" have over 1,000 names on their list, when I have more like nine or ten. It's high school all over again. I sort of blunder around and put up photos, not knowing what else to do. There's a place where you can say "what's on your mind", but judging from the comments, it looks like little snippets of whimsy, not requests for help or advice. Everyone is so cheerful, all day long, all the time. No one has a family crisis or an illness or a reversal of any kind. It's all good! Great things happen to the Facebook gang, non-stop, things so enviable you might  be tempted to wonder if reality isn't being bent just a little, mainly so you'll feel  a whole lot worse about your own life. 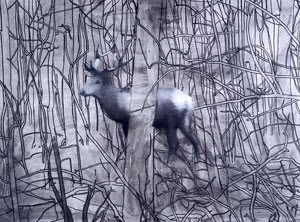 I guess I haven't learned Facebook etiquette, its invisible set of rules. When I post comments that are serious, especially about my work, I am usually made to feel like an opportunist who should just shut up and go away. Which I'm supposed to. And which I can't. Not this time.


Over the years I've seen Rich Correll all over the place. I am certain I saw him on Leave it to Beaver, but I was seven or eight years old then and didn't have much appreciation for these things. TV shows just popped out of the screen fully-formed, like Athena from the head of Zeus. But every time there was a documentary on movies it seems he'd show up, and since I did not ever see them in chronological order he would get older, then younger, then middle-aged in the strangest way.

He figured large in the brilliant Kevin Brownlow documentary The Third Genius, a rich dense Christmas pudding of a film just chock-a-block with archival interviews, people who knew Harold "when". This was one of those times he mysteriously got younger, and the reminiscences flowed so easily it was probably one of those things where you could just turn the camera on. 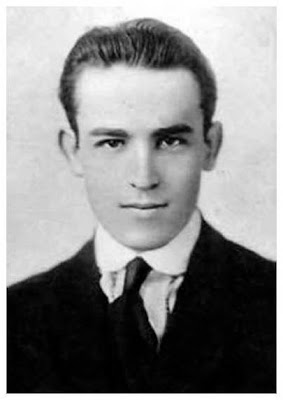 Rich Correll also appeared on the bonus disc in the superb Harold Lloyd Comedy Collection DVD set. At one point, after all the reminiscences, suddenly there was pure magic, more magic than Harold ever pulled off in his entire life as a master conjurer.  He brought out a battered old suitcase full of treasures: Harold Lloyd's makeup kit, full of artifacts going back to the early 1900s. Old gloves (Harold needed a prosthetic glove because half his right hand had been blown off in an accident), tubes of greasepaint, a mirror with his name lettered on it. And pairs and pairs of horn-rimmed glasses. Harold Lloyd's glasses. Though Harold referred to his alter ego as the Glass Character, these were empty frames with no glass in them.


This is why I want to talk to Rich Correll. Harold Lloyd bequeathed this battered old case of magic to him. He has it in his possession. If Harold's spirit is anywhere, it's there, and Rich Correll holds it in his hands. 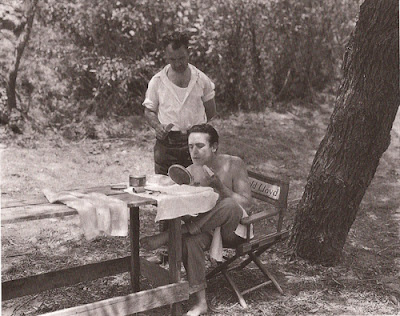 Bizarre YouTube video of the week (if not the century)


Believe me when I say, I cannot find ANY YouTube video with Rich Correll in it. Hardly any, anyway. I mean, old Hollywood Squares episodes so compromised in quality, so melted of acetate that they look like bad trips. One sliver of a documentary about Stan Laurel from 20-some years ago. That's it. This is the same Rich Correll I wrote about in Searching for Rich Correll, a post from several years ago which I plan to rerun, if only to give me a sense of perspective. It's all about seeking the Chimera, the unicorn of good fortune, and seeing its ass bounding into the woods again.

Being of bloodhound blood type, I can do nothing but pursue: "I sought him, down the nights and down the days. . . " Oh, oopsy, that's "fled him", but it might as well be fled, for all it has netted me.

I don't know if he has my book in his hands or not. He has talked to me on the phone twice. Unexpectedly, for I wondered if he would be truly interested. I sent him 300 pages of loose manuscript, a truly dumb thing to do, then phoned him and told him not to read it. I wonder if we really got off to such a good start. 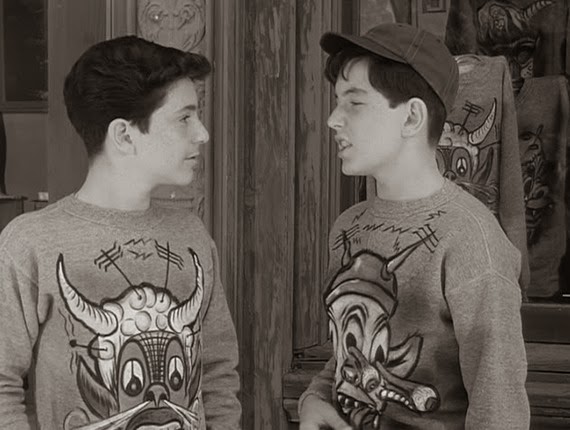 He hasn't answered my emails, but in this he's like 95% of other people. I wonder, am I cursed, or is this just the way the world is now? My world, anyway. I may never find out.

I can't say the visuals are too effective here, though right at the beginning you see Richard and Beav walking down the street talking, I mean just talking normal, and there are English subtitles. Then the camera sort of goes sideways, and stays there. Maybe this was shot by Antonioni or something, one of those cool directors from the '60s.

Maybe there's more, who knows. Maybe we will talk again, he'll actually read my book, or he won't, or he'll forget all about it. The mud puddles I step into always seem to be completely bottomless.

Posted by Margaret Gunning at 3:56 PM No comments: