Note the circle with wings (Osiris) on the upper border,
the radiating rays of the sun,
the Egyptian Ankh (reincarnation),
the Pythagorean triangle of his legs (sacred geometry),
the 90 degree square angle of the arms,
the serpent radiating from his "third eye",
and the crucifixion mockery.

I keep thinking I've gotten to the bottom of the barrel of craziness that surrounds Harold Lloyd. Not a bit of it. Here is a piece almost as strange as the "psychic bridging" site I found years ago while still writing the novel, then couldn't find again, ever. It disappeared in the night. The psychic bridging was some sort of time travel or remote viewing, where supposedly you could see into any era or period of time while remaining in the present. Harold Lloyd's name was mentioned in the piece in a most alarming way. The writer said he "became self-detached during filming" in the 1940s (he did make his last film in that time) and had to be hospitalized. But why, how - wtf??

Anyway, it all disappeared, and I never did find out if Harold worked for the CIA during the Cold War or what. Being as he was Imperial Potentate of the Shrine, Shriners being  Freemasons on steroids, there is much to indicate that he had more than a passing relationship with mysticism. That doesn't mean he appears in my living room at night (oh dang, I wasn't going to tell anybody). 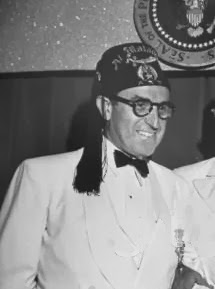 I swear I didn't write the following piece, but it interests me, because with all his Masonic orientation (from his late 20s until the end of his life), there might be some sort of subconscious symbolism working its way out in this brilliant, but admittedly very strange movie with the oh-so-Lloydian title, Never Weaken.

Anyway, Just Wondering, whoever you are, I am lifting a piece of this article (which I have since realized has been reblogged all over the place, so who knows where it really came from) because I like it. I will offer my own interpretation shortly. 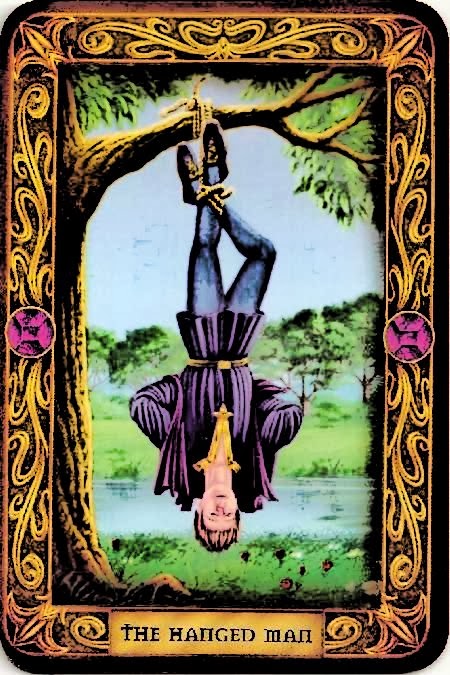 The Hanged Man Of Tarot In Popular Culture

What do Harold Lloyd, Ringo Starr, and Eddie Van Halen all have in common?

They've all appeared in movies or videos as "a man hanging upside-down from a rope by one leg and crossing the other leg".

That would be quite a coincidence if they were not all mimicking the same thing, The Hanged Man, which is the twelfth card in the Tarot deck.

Harold Lloyd is hoodwinked but then "enlightened" in the short film "Never Weaken" (1921).


Harold Lloyd's "Never Weaken" (1921) is full of masonic imagery.  He sits in a chair and blindfolds himself to commit suicide, but is lifted up through the air by a construction girder.  He hears harp music and takes off his blindfold to see a beautiful angel.  Only when he hears jazz does he realize that the angel is not real and he is not in heaven but high above the street and about to fall to his death.  He makes it back to safety.

In masonic terms, he is initiated by sitting in a throne, being hoodwinked, facing death, and being deceived.  He is a "hanged man", suspended on a steel beam between life and death.  He is then enlightened to a higher plane of understanding when the veil is lifted from his eyes and he perceives reality. 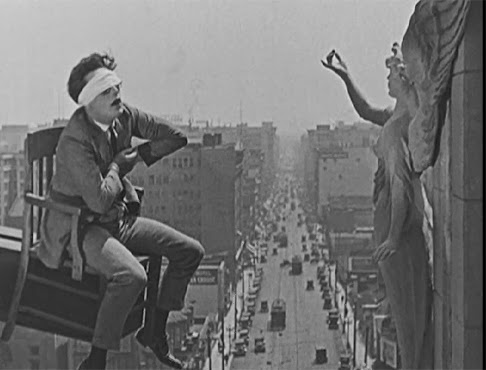 There is also a ring-on-a-string marriage ritual, a blood ritual, and a lot of focus on men's rear ends.

Everyone remembers Harold Lloyd hanging from a clock in Safety Last (1923) but nobody seems to remember the next scene where he swings upside-down from a rope by one leg:

Not bad stunts for a man who lost his thumb and forefinger four years earlier.

Harold Lloyd swinging from a rope with one leg bent in "Safety Last".

There are bank and stock exchange signs in the background, six years prior to the Stock Market Crash of 1929.

There is blood in this, yes, actual blood, when he pricks his finger trying to impale himself on one of those spikes they used to stick notes on. Is this an unconscious (pun intended) reference to Sleeping Beauty fatally pricking her finger on a spindle? He does swoon in another scene, losing consciousness, almost falling out of his chair. If you want to look for Freudian flying/falling/bleeding/dying/surrealistic/Masonic/angelic/phallic symbols in this thing, you'll find them. It's chock-a-block.

As for being blindfolded,  Harold Lloyd was blind for a while, after the legendary accident which shaped the rest of his career/life. No one knew if he would ever see again, and one can imagine the terror, the helplessness of having to lie there, burned and maimed and blind. . . The joy and even ecstasy with which he reaches out for the Angel of Death in the movie might even reflect his profound desire to die and be done with this agony. Perhaps he even considered suicide himself: it's not a funny topic, but it somehow found its way into two of his movies.

Well, why not a hanged man? He was into all that Masonic stuff, wasn't he? Magic shows, Tarot cards, deals with the devil? Haitian voodoo (no, that's me). God knows what else I'll find, that he was a polygamist or something, or worse than that, a Rotarian.

(Weird, weird stuff. . . I've been trying to post a gif of Harold suspended on the chair, and it keeps. . . disappearing. First it half-disappeared. This has never happened to me before, ever, in my entire career of fooling around with/making gifs. Then it just vanished, though a ghostly outline allows me to make it small, medium or large. BUT IT ISN'T THERE! I tried to put it back, and I can't put it back because, in fact, it is already there. . . I just can't see it.) 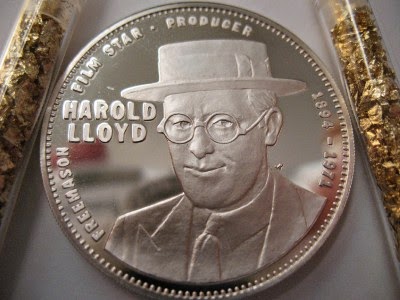 Further revelations on the Freemason Connection.  I decided to re-run this post because the subject is so fascinating, and I'm beginning to think it even has some truth in it. Harold was so deeply saturated in the ritual of the Shrine that they actually struck a coin with his likeness on it (don't worry, I'm not going to buy it, though it's tempting, only $35 on eBay). I also found, weirdness of weirdnesses, a whole lot of photos of an even stranger item, a Shriner scimitar - all part of that ritualistic stuff, and though it doesn't tell us what exactly the connection is, Harold Lloyd's name is associated with it. And it has a very strange handle. 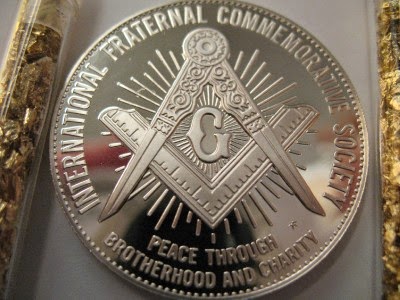 The flip side. We saw a picture of one of these on the bumper of a car recently, and I said, "oh look, a Freemason symbol," and my husband said, "no, that's an engineer's compass." So who knows. Who stole it from whom? 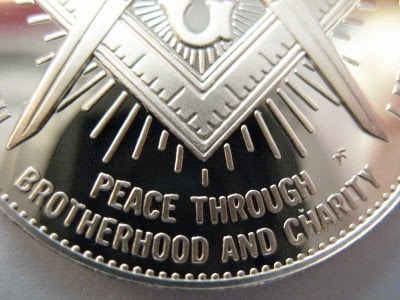 Kind of hard to believe all that evil conspiracy stuff when you see something like this. 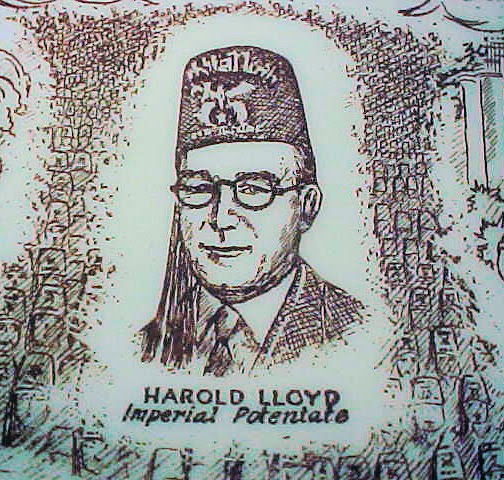 I don't know what this is for sure, something painted on ivory or a plate or something? I forgot to keep the reference, and now I don't want to look it up again. 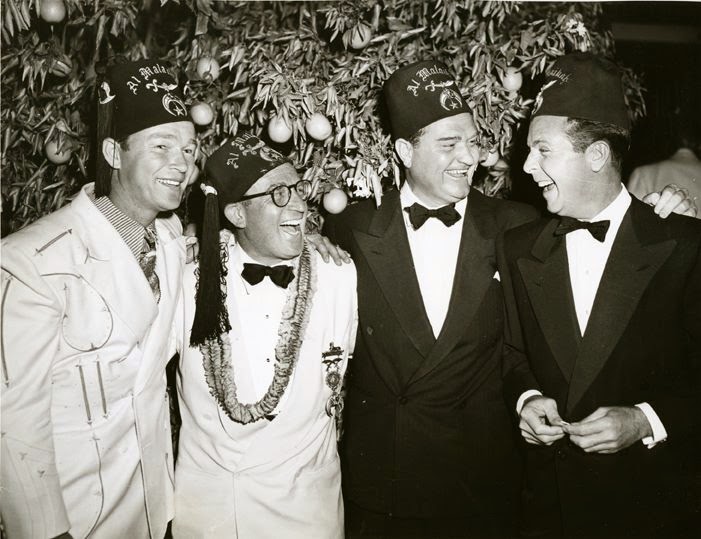 Harold having a whale of a time with Roy Rogers, Red Skelton and someone else famous, can't quite recognize him but he looks familiar. Harold Lloyd and Red Skelton. Skelton. Hmmmm. Or is it Red SKELETON? (You decide.) 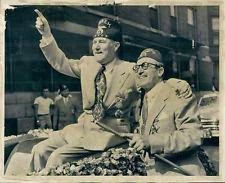 Harold as Imperial Potentate, the chief honcho/Grand Poo-Bah of the Shrine. Not too shabby. I can't quite figure out if that's his Dad, the beloved Foxy, pointing to something. 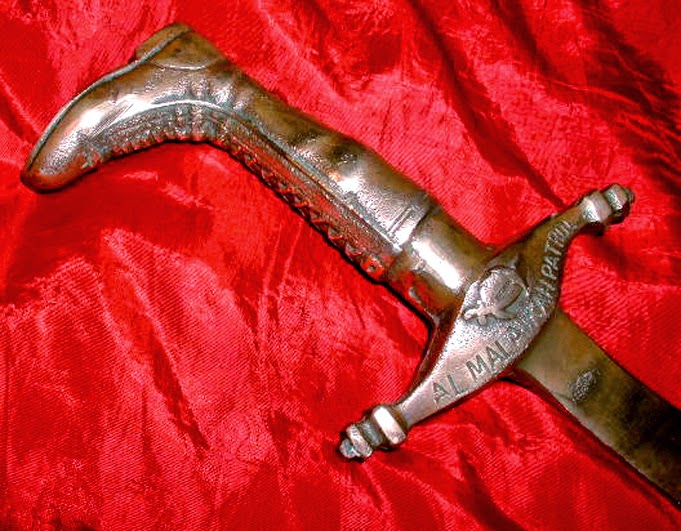 The boot-handled scimitar. Now THIS is weird. Sado-masochism, a foot fetish, jackboots, what? Did anyone ever USE the scimitar, and for what? Did this really belong to Harold, and why did it have a foot on the end of it? The questions never end. 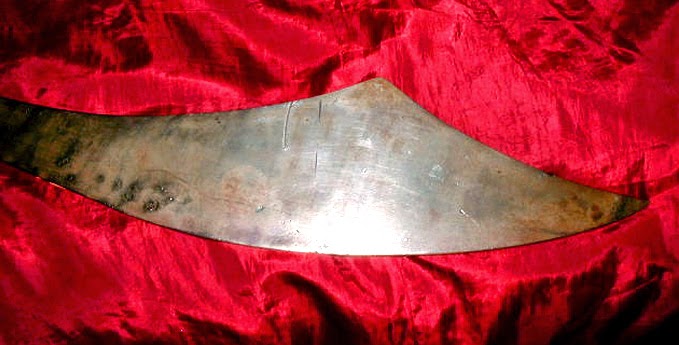 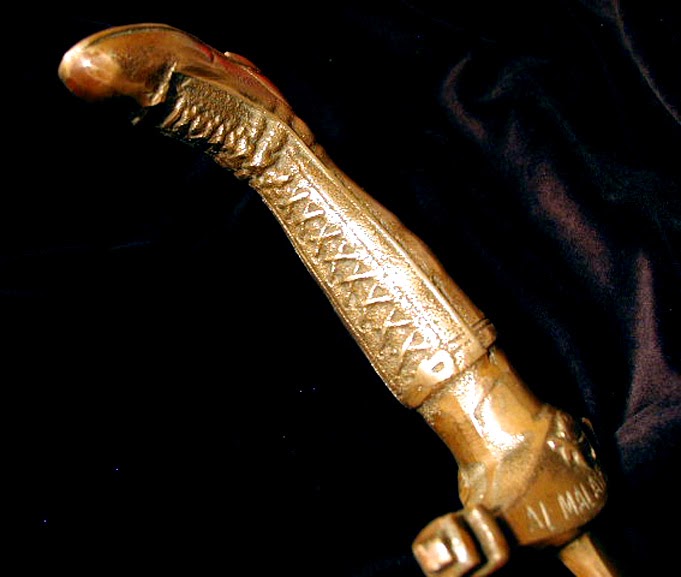