No, no, no, I swear this gif relates! And I didn't write these, though I wish I had. I don't know how anybody could sit there and figure even one of these out. They sort of make sense, in a weird, almost surreal way. It's hard to find anything to illustrate these, so I tried to dig up a few palindromic images of my own.

Some of them are, I'm warning you, pretty weak, but the palindromes are magnificent.

A dog, a plan, a canal: pagoda.
A man, a plan, a canal: Panama.
A new order began, a more Roman age bred Rowena.
A tin mug for a jar of gum, Nita.
A Toyota. Race fast, safe car. A Toyota.
Able was I ere I saw Elba.
Animal loots foliated detail of stool lamina.
Anne, I vote more cars race Rome to Vienna.
Are we not drawn onward, we few, drawn onward to new era?
Are we not pure? "No sir!" Panama's moody Noriega brags. "It is garbage!" Irony dooms a man; a prisoner up to new era.
As I pee, sir, I see Pisa!

Barge in! Relate mere war of 1991 for a were-metal Ernie grab!
Bombard a drab mob.
Bush saw Sununu swash sub.
Cain: a maniac.
Cigar? Toss it in a can. It is so tragic.
Daedalus: nine. Peninsula: dead.
Dammit, I'm mad!
Delia saw I was ailed.
Denim axes examined.
Dennis and Edna sinned.
Depardieu, go razz a rogue I draped.
Desserts, I stressed!

Did I draw Della too tall, Edward? I did?
Do good? I? No! Evil anon I deliver. I maim nine more hero-men in Saginaw, sanitary sword a-tuck, Carol, I -- lo! -- rack, cut a drowsy rat in Aswan. I gas nine more hero-men in Miami. Reviled, I (Nona) live on. I do, O God!
Doc, note I dissent: a fast never prevents a fatness. I diet on cod.
Drab as a fool, aloof as a bard.
Drat Saddam, a mad dastard!
Draw, O coward!
Draw pupil's lip upward.

Live not on evil.
Lived on Decaf; faced no Devil.
Lonely Tylenol.
Ma is a nun, as I am.
Ma is as selfless as I am.
Madam, I'm Adam.
Madam in Eden, I'm Adam.
Marge lets Norah see Sharon's telegram.
May a moody baby doom a yam.
Meet animals; laminate 'em.
Mr. Owl ate my metal worm.

Murder for a jar of red rum.
Never odd or even.
No, Mel Gibson is a casino's big lemon.
No cab, no tuna nut on bacon.
No lemon, no melon.
No sir -- away! A papaya war is on.
On a clover, if alive, erupts a vast, pure evil; a fire volcano.
Party boobytrap.
Poor Dan is in a droop.
Reviled did I live, said I, as evil I did deliver.
Rise to vote, sir.
Saw tide rose? So red it was.
Senile felines.
So many dynamos!
Some men interpret nine memos.
Stab nail at ill Italian bats.

Stack cats.
Stella won no wallets.
Step on no pets.
Stop! Murder us not, tonsured rumpots!
Straw? No, too stupid a fad; I put soot on warts.
T. Eliot, top bard, notes putrid tang emanating, is sad. I'd assign it a name: gnat dirt upset on drab pot-toilet.
Tarzan raised Desi Arnaz' rat.
Ten animals I slam in a net.
Too bad I hid a boot.
Was it a car or a cat I saw?
Wonder if Sununu's fired now.
Won't I panic in a pit now?
Won't lovers revolt now?
Yo, banana boy!
Yo, Bob! Mug o' gumbo, boy!
Yo, bottoms up! (U.S. motto, boy.)

POST-SCRIPT. Like the success of my book, this doesn't want to happen, so head-bashing is useless indeed, unless I wish to become a rampant alcoholic who lives for the advent of Happy Hour. And I've had enough of that. But I have tried to piece it back together after a large chunk of it just disappeared, along with the last gif which I retrieved from the garbage, i. e. the recycle bin.

Wondering about the last gif, the palindrome? Oh OK, this is OTTO Klemperer. Father of Werner Klemperer, who played Colonel Klink on Hogan's Heroes. We were sitting in a symphony concert back in the '60s, and my Dad said, "Look, there he is."  "Who?" "There's Klink." He was right, but we didn't speak with him, too cowed by his greatness.

By all the saints in freakin' Beulah Land, guess who's got his own Pinterest page! Yes, that's right: His Satanic Majesty, Milky the Clown.

Milky keeps coming around in my life like a chronic disease, with horrible outbreaks followed by deceptive remissions. Here he is again, looking none too well himself - in fact I'm not even sure that's really Milky, he looks so sallow. Hung over, perhaps. The pictures on Pinterest were about an inch square, and the only larger ones on Google were from my own blog. Harrumph. 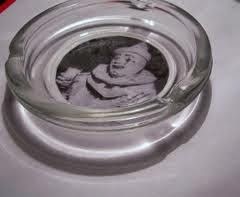 Yes, I know I've run this one before! The Milky the Clown Ash Tray. Don't you want to see it again? You wanna make something out of it? 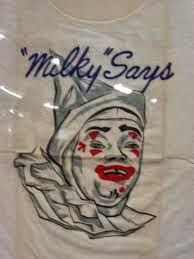 Milky says: WHAT? "Is we not zee Super Race?" It could be anything. 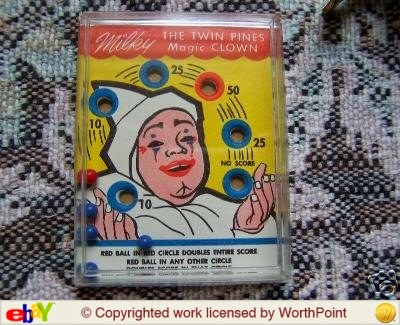 One o' dem games where you put the little balls in the little holes, though it looks vaguely like a sack of flour to me. Or some weird sort of pencil sharpener. 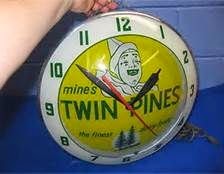 Now, I know this is original. It's a tennis ball with a clock built in. It lasts for one serve. Either that or it's a stopwatch of some kind, set to stop when the world ends. 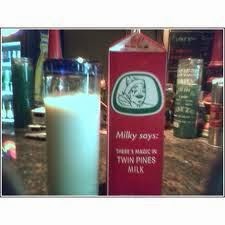 Milky with a boy scout. I apologize for the poor quality of these. They were made with a camera obscura in the 17th century. 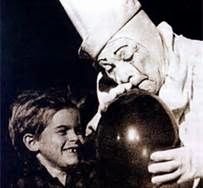 When I first saw this, I swear I thought the Milkster was doing lines of cocaine, but it appears, on closer inspection, that he's blowing up a balloon. 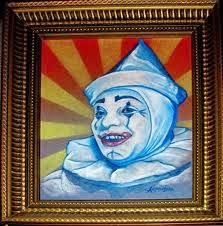 Posted by Margaret Gunning at 1:46 PM No comments: