Guess I must just be in a righteous mood. You know how it is on YouTube: it's designed for addictive browsing, where way leads on to way, and often you can't go back. So you end up affixing, pasting your favorites onto your blog so you won't lose track of them.

This has to be the ugliest piece of video I have ever seen, so of course I had to post it. When I first watched it, I just could not take in what I was seeing. It was an ugly mob scene featuring hysterical men making weird noises and pushing people over. I would love to know more, i. e. who ARE these people, WHERE are they and WHAT are they doing?, but the video says nothing. The clips have been taken from other videos, perhaps illegally, so are not labelled.

This is obviously some sort of mass exorcism. Trouble is, it's the exorcist who's possessed. Possessed by the God of idiocy. The most baffling and grotesque example is the long clip in the middle. For some reason another guy sort of holds on to him, so he won't float away to Cuckooland. One wonders at the sadism of such people, who surely can't believe they're doing anything of value, or doing anything at all except create false hopes and suck away cash.

Though it's the poor and marginalized who are most taken in by these vampires, I notice the suits and ties and '80s-style dressed-up women with high hair and wonder who on earth would fall for this. It's desperation, for sure, the need to believe, but do we really have to check our intellect at the door, to give our will over entirely?

I'm reminded of Nazi Germany, of Triumph of the Will and its hideous uniformity, the fierce, vacant pride of people falling into lockstep and throwing their individuality gleefully away. People do NOT want to think for themselves. It's a burden to make decisions and live with the consequences. I've heard so many people, even "moderate" Christians and people in 12-step groups (which can be more fundamentalist than the whooping, hollering crowd you see here) go on and on about how "God is in charge, God makes all the decisions, I just put it all in God's hands." Even when I was part of the United Church, that Godless bunch of New Age heathens and mortgage brokers/Mary Kay salesladies, I was encouraged, nay, pressured to just trust in God, bring all my troubles to Him/Her and believe that I would be guided, reassured, even healed.

Didn't happen, folks. In fact, I wasn't the only one who found that her soul maladies and vulnerabilities of the body only got worse in "God's hands".

The truth is, "God" does not HAVE hands. God is a concept, just about the slipperiest, most unknowable and inexpressible concept that exists. God is, perhaps, the mysterious force that gave rise to all life, to the entire universe. And it didn't happen in a week or even a couple thousand years, but an expanse of time so vast we can't even comprehend it.  But is there a personal God, a God who knows us, cares about us, tends to us and listens to all our sorrows?

I think not. Sorry, God. For that, we need each other.

Afterblog. After watching this compilation, I am incredulous: I MUST find out more about the maniac with the suit-and-tie audience. Watching it over and over again, I notice to my horror that most people in the audience are wearing badges. Are they all members of the Gospel Insane Asylum Club or what? Is this some sort of conference? What the hell is going on here? Why are people going along with it? Are they functionally sane? Is HE functionally sane? Are people that desperate to be taken over, to voluntarily give up their will and power of decision? In other alarming clips, I've seen examples of people claiming to be "healed", when in truth they had cancelled surgeries, chemotherapy or other medical treatment in the deluded belief they didn't need them. In one clip, an elderly woman said she was scheduled for open heart surgery because she had several blocked arteries, but glory be to God, she didn't need it any more! "So you went to the doctor and - " began the televangelist scumbag. "I don't need no doctors now! I'm healed! Glory be to God!" In this case, even the evangelist seemed a bit uneasy, but quickly went on to the next victim.

How To Make Banana Bread (don't try this at home)

Posted by Margaret Gunning at 10:47 PM No comments:

Email ThisBlogThis!Share to TwitterShare to FacebookShare to Pinterest
Labels: how to make banana bread 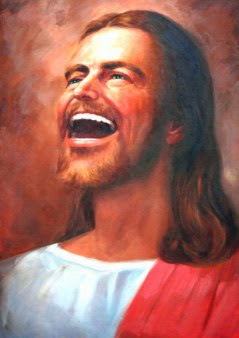 From what we know of Jesus - which, from a historical perspective, isn't very much - he doesn't seem to have been a real good-time sort of guy. In spite of all those references to turning water into wine, officiating at weddings, last suppers and the like, and even if he DID get a little tipsy from doing so, wisecracks and one-liners do not abound in his many familiar sayings. 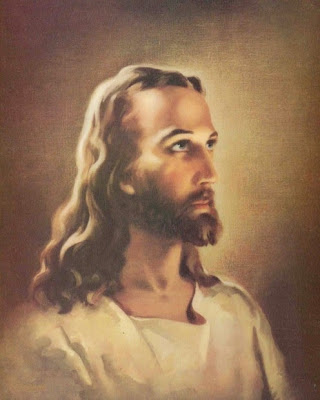 THIS was the Jesus I grew up with, and if ever a sobersides existed, he was it. He had this long, sombre, Anglo-Saxon face, a receding hairline, and the high forehead of aristocracy. Not exactly a laugh riot.  The only quizzical line of his that  I can think of is the camel through the eye of the needle (or was that a needle through the eye of a camel? Poor camel!), and that line about, "You see the speck in your neighbor's eye, but not the great log in your own eye." Maybe you had to be there. 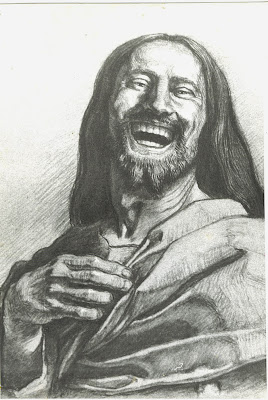 We want to know what Jesus looked like. We're curious. Even non-Christians want to know. Even people like me - and in spite of years of uneasy association with the church, I now believe Jesus was a composite, the teachings and sayings and saving deeds of many itinerant prophets rolled into one - want to know. Unconventional takes are welcome, even the above, rather smarmy pose, which probably shows up more often than any of the others, and in more guises. 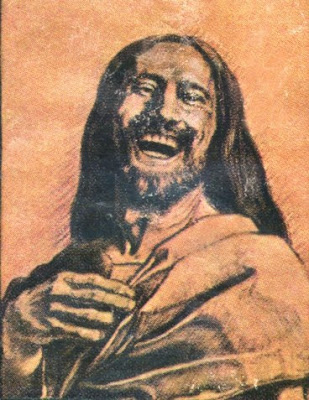 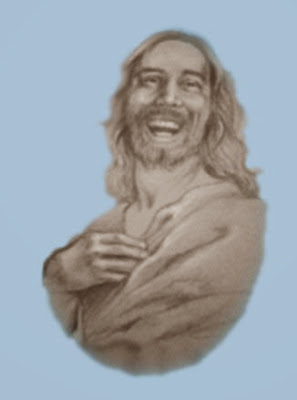 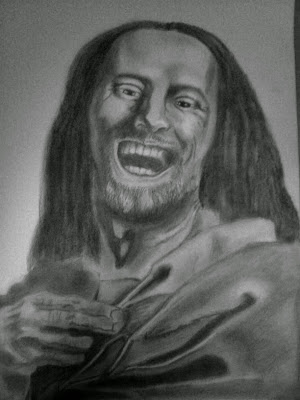 And this one, an obvious corruption. 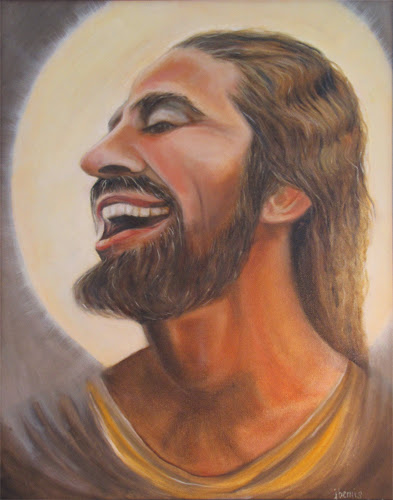 I don't know why it is, but artists have a hard time portraying Jesus as a - what? A real man, or is that too homophobic? What I'm trying to say is, Jeez! He looks like someone competing in America's Got Talent or something, telling us all that his Mom ("Hi, Mom! You're my inspiration!")  is completely OK with his "awesome" lifestyle. Even the hairstyle is a little too Vidal Sassoon for my liking. 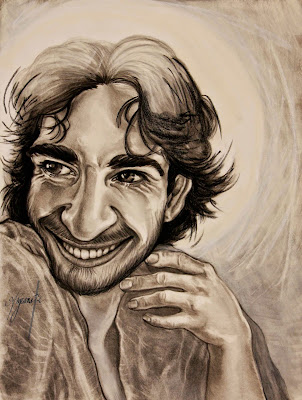 But this one is just plain disrespecful. Yes! - I believe that Jesus, if there really was a Jesus, likely laughed, because practically everyone who isn't brain-damaged laughs. But like THIS? The look in his eyes is wicked - demonic. He looks to be hatching some sort of evil plot. I don't know what puts these ideas into people's heads. You'd think, if you'd go to the trouble of painting or drawing a Laughing Jesus, there'd be a little more benevolence involved. To quote a Hindu guy I know: "Holy cow." 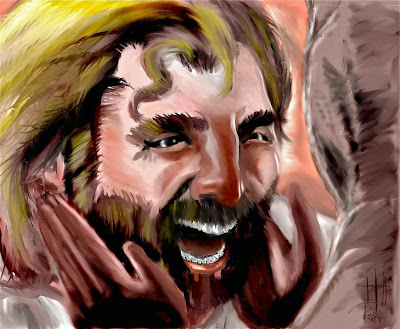 But it gets worse! Yes - this really is supposed to be Jesus - laughing. They sure had purty teeth all those thousands of years ago. 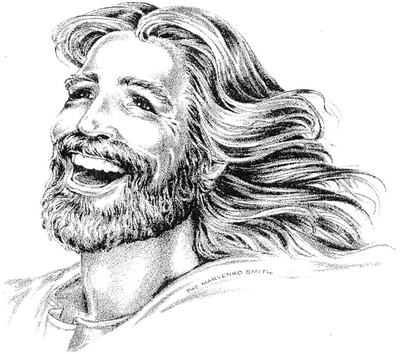 Does he have to look like this? In all of them? Or am I thinking in stereotypes again? Raymond Burr was gay. Rock Hudson. Gomer Pyle! None of them looked like this. "Wheeeeeeeeeee!" 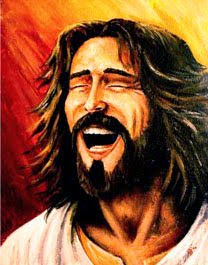 Howling, but more in pain than laughter. 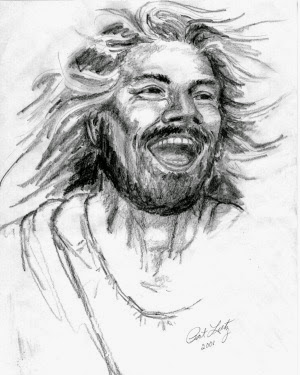 This one, for some reason, reminds me of a picture I saw in an anthropology text that depicted an australopithecine, humanity's distant ancestor. 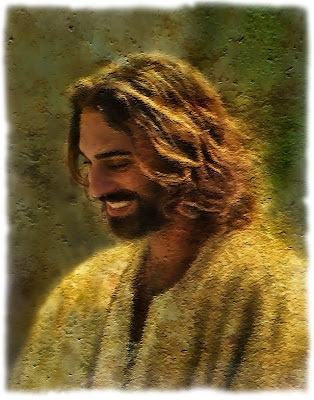 Once in a while, though, I find a depiction that just sort of appeals to me. This may look nothing like the "real" Jesus, the one who may or may not have existed. But it's a nice picture. He looks just Middle Eastern enough to defy the washed-out Sunday School stereotype, without being an out-and-out Neanderthal. He's - well, he's gorgeous is what he is! Just a hint of androgyny, enough to be cool without the salon look. I think I would welcome him as my personal Saviour - if he, and I, were so inclined.

P. S. (the "kicker"): Been looking for this one for years! Though there are those who believe I am nuts, I am an avid Blingophile. I love making Blingees, as they are my only real shot at visual art, and this one, sentimental though it may be, is quite beautiful. The subtlety of the animation is quite pleasing to me. It took a reverse-search through my TinEye program to find a true animated version, as I only had a jpg on hand from a post a lo-o-o-o-o-ong time ago. By the way, my search yielded 122 results. And as I look at it now, the reflection seems almost feminine, like the face of Mary. Jesus could always depend on his Mom. 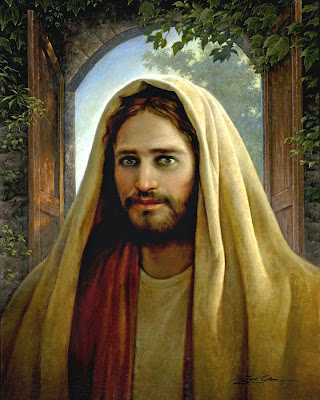 Post-post wow! I was quite thrilled to find, upon researching the paintings of Greg Olsen (who did the Christ image at the end of my Laughing Jesus display), that he also did the face of the Blingee I like. Some of his imagery is kind of cool, bringing contemporary figures into a Biblical setting. I wish my old white vinyl-covered Bible with the zipper on it had had pictures in it by THIS guy - I might have paid more attention in Sunday School. 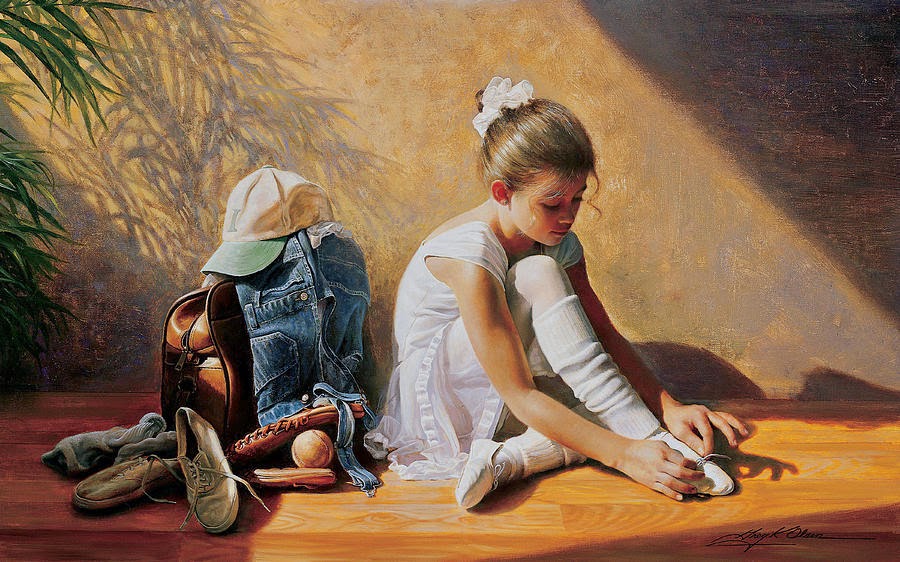 Another, more secular Olsen painting. I think it's quite charming and well-composed, and I like the quality of the light. I also like what it's saying: I have a couple of granddaughters tricked out like this.

Posted by Margaret Gunning at 9:52 AM No comments: