Dead Monk in the Middle of the Road, Volume 2: A Clockwork Monk

The Smithsonian Institution has in its collection a clockwork monk, about 15 in (380 mm) high, possibly dating as early as 1560. The monk is driven by a key-wound spring and walks the path of a square, striking his chest with his right arm, while raising and lowering a small wooden cross and rosary in his left hand, turning and nodding his head, rolling his eyes, and mouthing silent obsequies. From time to time, he brings the cross to his lips and kisses it. It is believed that the monk was manufactured by Juanelo Turriano, mechanician to the Holy Roman Emperor Charles V (Wikipedia).

But it gets worse.

This might just be the world's oldest surviving windup toy. It's the only existing footage of it, not just grainy but downright pixilated, adding to its creepy charm. Divested of his vestments, he looks even worse, as if that's possible. He's shaped like he's wearing a dress (making him the world's only transvestite medieval automaton monk). You can see something like feet going up and down at the front. Though his movements are described as "lifelike", they aren't. His jaw jerks closed, his hands seem spring-loaded, and perhaps are.

I wish I hadn't seen this, but there is no taking it back now, as it is burned into my memory. This would be a good subject for demonic possession, like Stephen King's old car (or was that My Mother the Car? I always mix those up.) I would imagine Mr. Medieval Monk would be noisy, with a grinding of ancient clockwork gears. As if he needed any more creepiture.

Maybe it's just me, but there's something kind of fetish-y about all those chains working back and forth, the snapping levers moving the hideously jointed arms. Somebody had to sit down and really figure this out. It must have blown medieval minds to see this, something that was not alive moving around as if it was.

The design kind of fell down here, but the feet were hidden under the robe, after all, so maybe it didn't look quite so much like someone was sitting in a wheelchair propelling themselves along. And note how the left foot takes two steps rather than one. . . This gif may be incomplete, since it's only a few seconds long (damn you, Gifsforum!), but that sure is an odd gait. Maybe he was meant to be mounted on a medieval skateboard.

For some reason this creeps me out worse than all the rest put together. It reveals how the automaton monk gets around. He's on wheels, obviously, and not surprisingly, and can swivel around as if on skates, but what kills me is that thing in back: IT'S A PIZZA CUTTER! What else could it be? This guy must have been nothing more than an elaborate tool for slicing up Charles V's pepperoni, bacon and mushroom Little Caesar's Tuesday Night Combo Special. Think how many times he must have gone back and forth! I wouldn't be surprised if he keeled over, his grinding feet kicking helplessly in the air, while Charlie scarfed down his hot buffalo wings chased with a gallon of Coke

Charles was born as the eldest son of Philip the Handsome and Joanna the Mad in the Flemish city of Ghent in 1500. The culture and courtly life of the Burgundian Low Countries were an important influence in his early life. He was tutored by William de Croÿ (who would later become his first prime minister), and also by Adrian of Utrecht (later Pope Adrian VI). It is said that Charles spoke several vernacular languages: he was fluent in German, French, and Flemish, later adding an acceptable Spanish which was required by the Castilian Cortes Generales as a condition for becoming King of Castile. A witticism sometimes attributed to Charles is: "I speak Spanish to God, Italian to women, French to men and German to my horse." But this quote has many variants and is often attributed instead to Frederick the Great.

(And as with most of these medieval royals, he was his own grandpa, being a direct descendent of Gorgo the Crosseyed, who married himself in 1236. And get a load of this Hapsburg lip:) 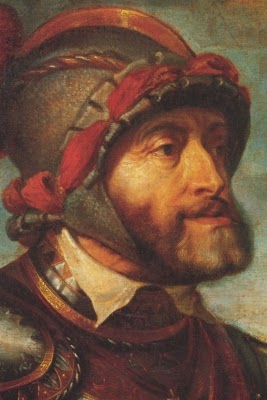 Do take into account the fact that these portraits were generally flattering. Oh dear.