Unbelievable! Mind-blowing pictures that will CHANGE YOUR LIFE! 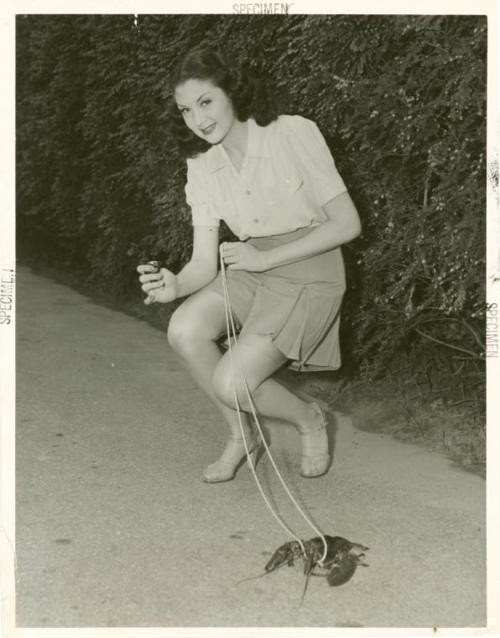 These are from one of the billion or so Facebook-linked pages, i. e.  Strange and Unusual Photos that will Amaze, Disturb, Sexually Arouse and Bankrupt You/Change Your Life Forever! (etc.)

Actually, they almost do.

This shot of a woman walking her pet lobster is - well - one of the strangest, taking your lunch out for a nice stroll before plunging it in boiling water and devouring it with drawn butter. 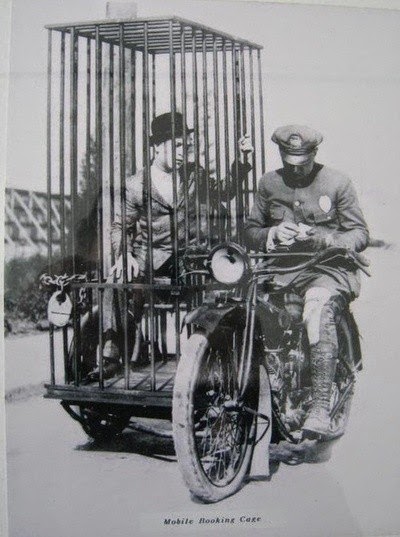 Oh, I like this. It's such a neat idea, and should be brought back. It's a portable sidecar/jail cell. This way, the cop can keep a good eye on the guy in case he tries to pry the bars apart. 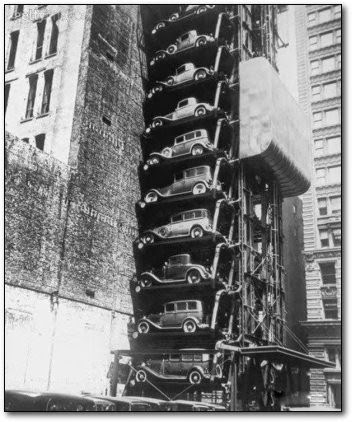 Uh, a way to stack cars. A LOT of cars. Don't ask me how they got them up there, or, even harder to imagine, how they ever got them down. (Chariots of the Gods, maybe?) 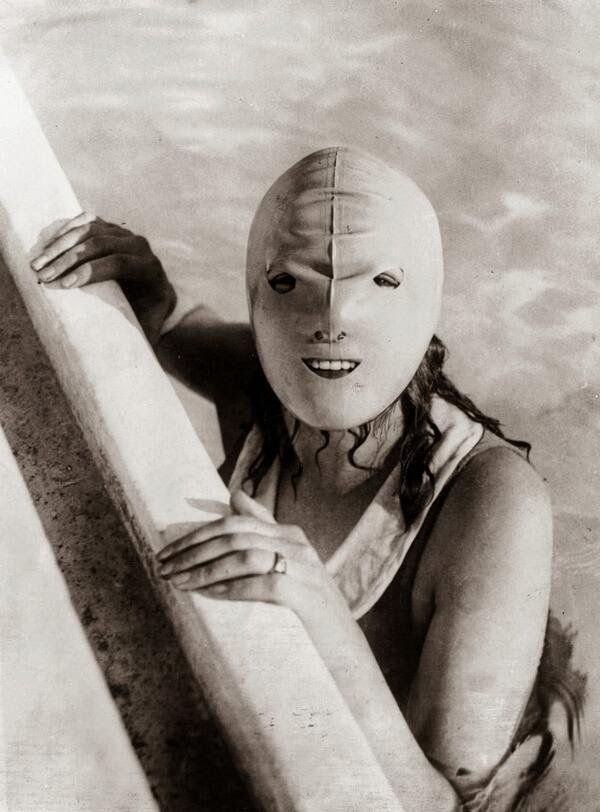 A very famous 1930s swimmer, Hannah B. Lecter. No relation to that other guy. 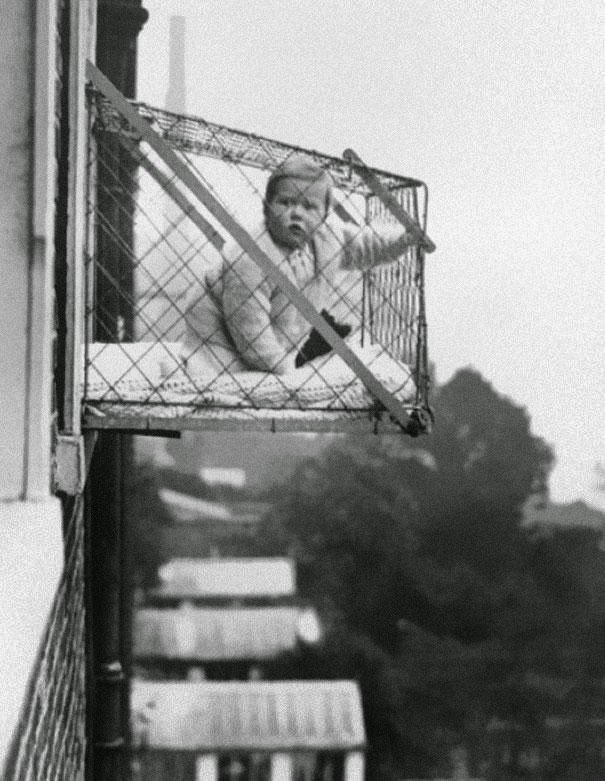 There are several photos which depict hair-raising treatment of small children. There is a disturbing air of normalcy about it all, queasy-making today. These chain-link cages were attached to the windows of apartments so Little Johnnie could get some sunshine. Don't want him to have a Vitamin D deficiency as he goes hurtling down 20 floors and lands on the cement. 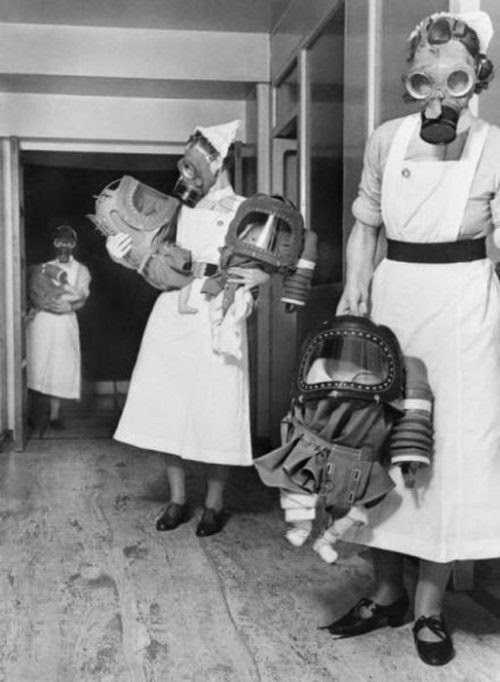 The things these nurses are carrying are babies. Yes, real live babies, wearing a sort of full-body gas mask, presumably during World War II. Note the little feet dangling down from the one on the right. 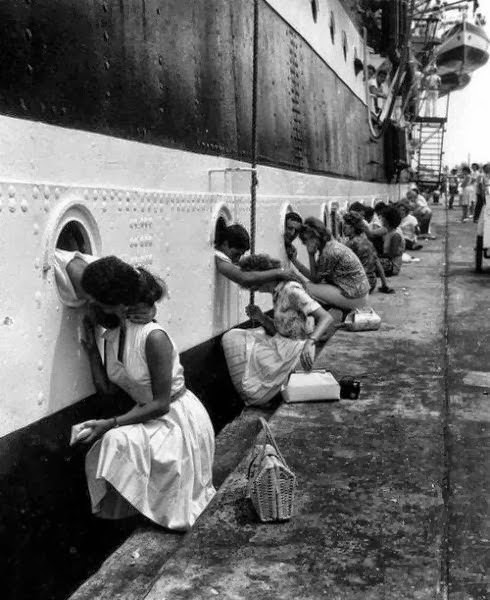 Do you know what? I must have a dirty mind, or else the military did. These holes in the sides of trains were designed so that soldiers could "kiss" their sweethearts one last time as they headed into battle. Their girl friends were supposed to stick their heads in there, but I think a hand might have been enough. I've heard stories about holes in the dividers of washroom cubicals, but mostly they're MEN's washrooms. But is it such a stretch to extrapolate? (Don't worry, "extrapolate" isn't anything dirty, or at least I don't think so.)

Now that I've had time to reflect on this awful situation, I realize this must be a boat of some kind. Perhaps these are portholes. Oh dear. 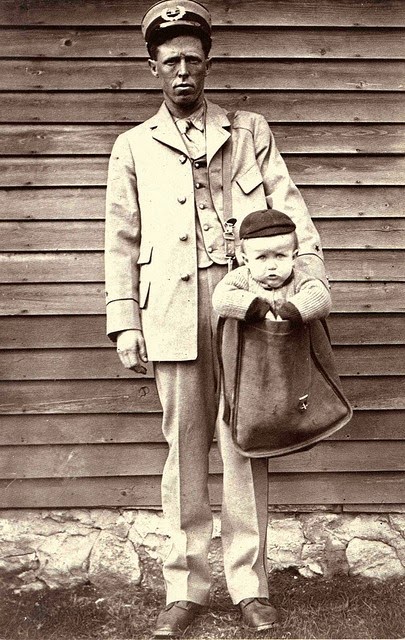 Weird things you could do with babies in the '40s. You could have them delivered by mail. Really.  Reminds me of those old Disney cartoons, Dumbo maybe, where babies were delivered by stork. After a while the practice was outlawed. There was no explanation here as to why, how, etc., just that you "could". In case you think this is impossible, during my recent exploration of Phil Spector and his famous "wall of sound", I discovered that he presented his wife with a set of twins for Christmas. No, I mean GAVE her a set of twins, for an actual Christmas present. The twins weren't babies either - they were five years old, and Spector was vague about where they had come from. Unlike many an unwanted Christmas gift, this one couldn't be returned.  Not surprisingly, they grew up with serious "issues".

(I have to say it. That baby. There is something seriously wrong here. Either that, or it's a Royal. Its eyes are too close together, and slant like Prince Phillip's. Worse, the mailman has the same slant. It's unfortunate. Perhaps he's responsible, not happy about it, and about to surprise someone with it,  like Spector's twins.) 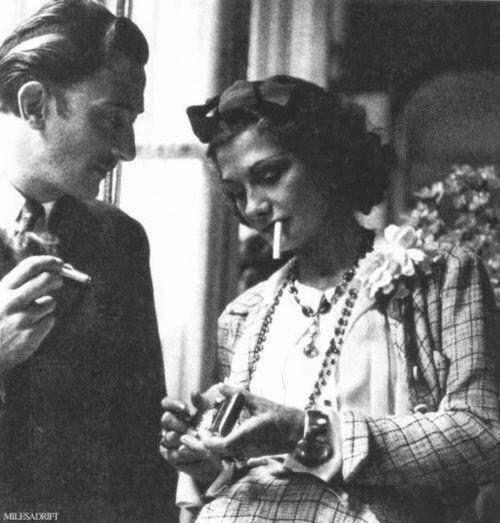 Salvador Dali and Coco Chanel. Whatever happened to this kind of glamour? It has all been airbrushed away. 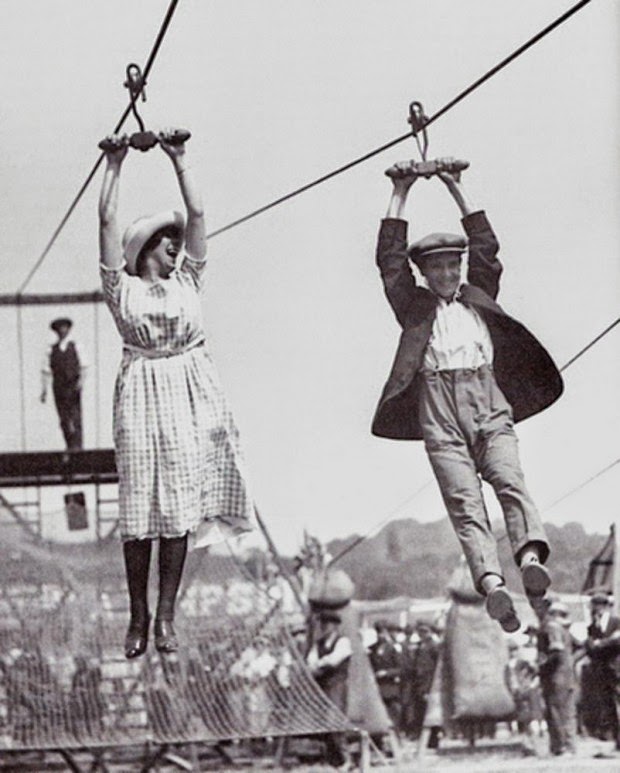 I can't tell if this was before or after hemlines went skyward, but it at least proves that ziplines are hardly new. If safety standards were the same as for that baby-in-a-cage, I wonder how many survived. 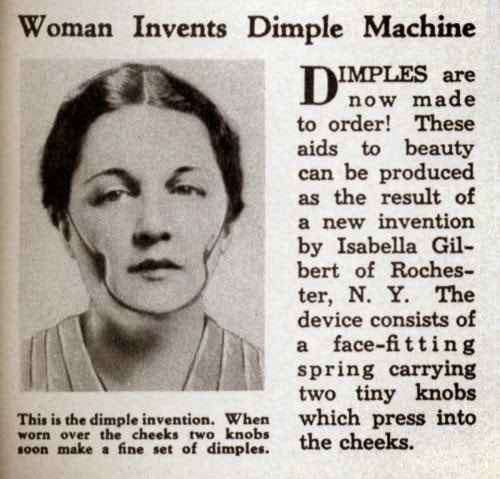 The invention comes with two sterile bandages to aid healing of the puncture wounds. 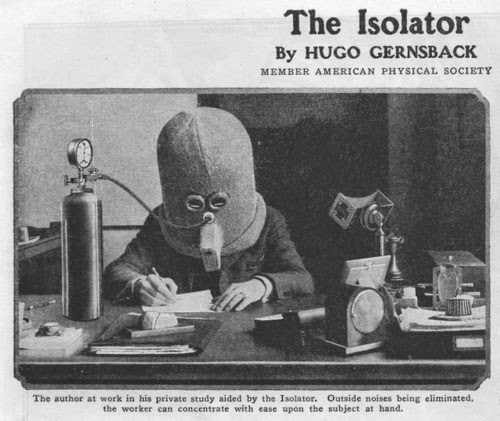 My personal favorite. There is a contemporary version of this, but I'll be damned if I can remember the name of  it, and I don't want to look it up because it's 12:22 and I haven't had lunch yet. But look at it: attached to what looks like a fire extinguisher, with all those strange gizmos around. Pretty terrifying, and it must've been hot in there. Why not just stick your fingers in your ears?


POST-BLOG REFLECTIONS. Since Matt begged me not to post any gifs, I'll do the next best thing. How could I NOT Blingee "The Isolator"?