Posted by Margaret Gunning at 11:58 PM No comments:

Tell Tale Tit (your tongue shall be slit) 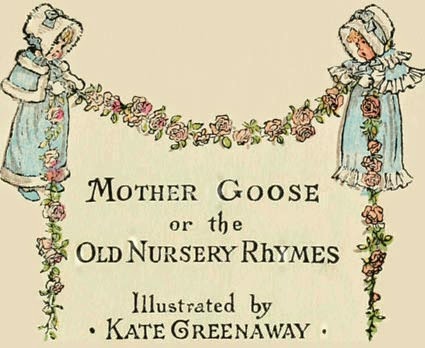 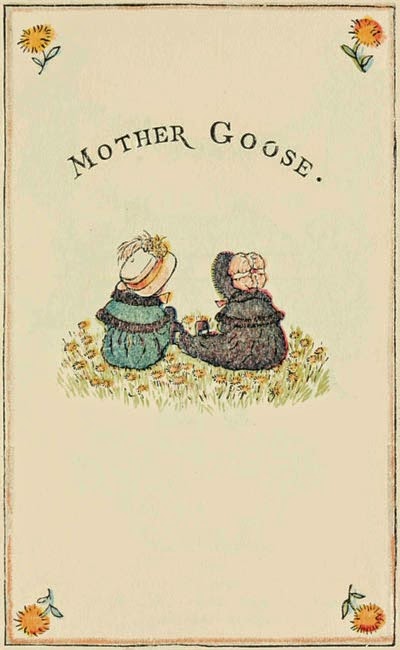 This was one of those accidental finds. For some reason a line from a nursery rhyme popped into my head - no, wait, it was something I read on Facebook about an author who wrote about nursery rhymes! Then I remembered an odd little Mother Goose book I had as a kid, with a bizarre rhyme in it about "chop-a-nose day". I remember my brother and I making terrible fun of it, but no one else believed such a rhyme even existed. Then. . .

This is the grand day of the Internet, that most splendid of times, when information is forever tickling your fingertips. All you have to do is grab. I'm still finding out what "chop-a-nose day" is, and I suspect it's a corruption or mispronunciation of something else. Until then. . . these are excerpts from the Gutenberg version (so it's OK to reproduce them) of a gorgeous little book by Kate Greenaway, who is responsible for these exquisite drawings. They would appear to be from the Edwardian era.

I have excluded Little Miss Muffet, Humpty Dumpty, Jack and Jill, and all the others we already know about, leaving only the oddball ones. Many of them refer to social status in some way (not unlike the pop songs I wrote about recently), with beggars and kings appearing in the same verse. The rhythms here are irresistible, and if they haven't already been set to music, music just bursts out of them. One can hear these as skipping rhymes, or hopscotching, or perhaps even clapping. "The cat ran up the plum tree" is obviously meant to be chanted while bouncing a fat baby on your knee.

And how far back do these go? No doubt, like folk songs, they evolved over centuries. Ring Around a Rosy, which I didn't include here, is apparently medieval and was originally a chant to ward off the plague. 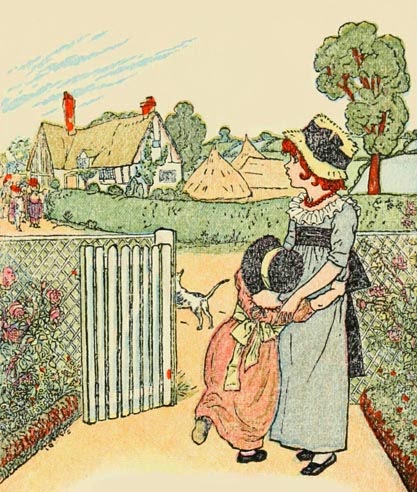 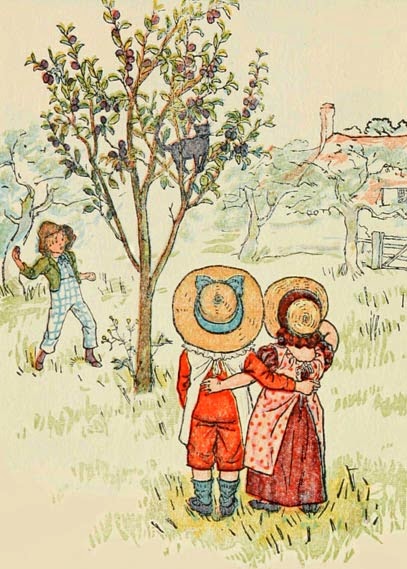 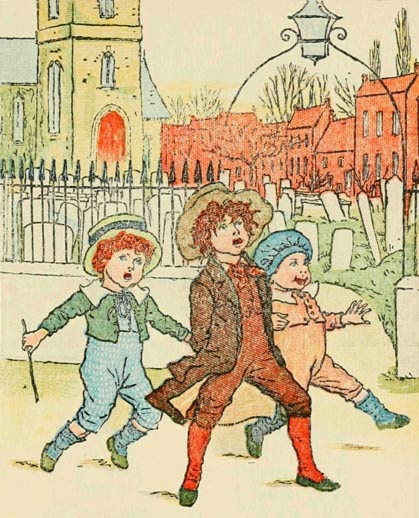 We’re all jolly boys, and we're coming with a noise,
Our stockings shall be made
Of the finest silk,
And our tails shall trail the ground. 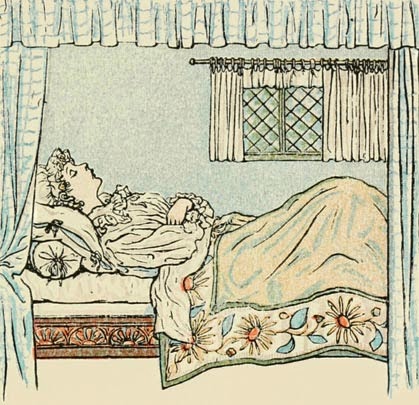 Elsie Marley has grown so fine,
She won’t get up to serve the swine;
But lies in bed till eight or nine,
And surely she does take her time. 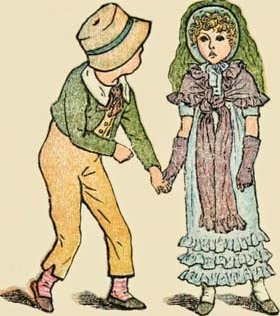 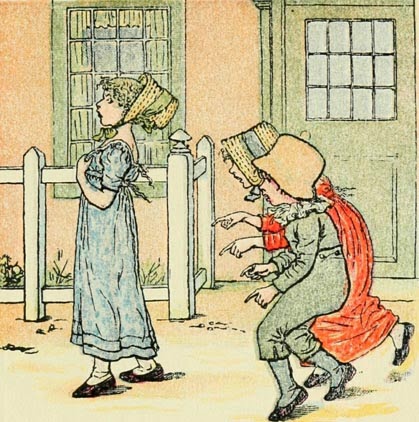 Tell Tale Tit,
Your tongue shall be slit;
And all the dogs in the town
Shall have a little bit. 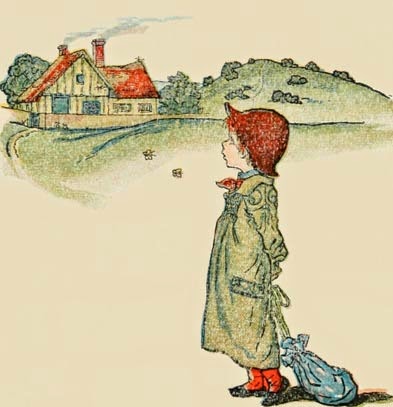 A dillar, a dollar,
A ten o’clock scholar;
What makes you come so soon?
You used to come at ten o’clock,
But now you come at noon! 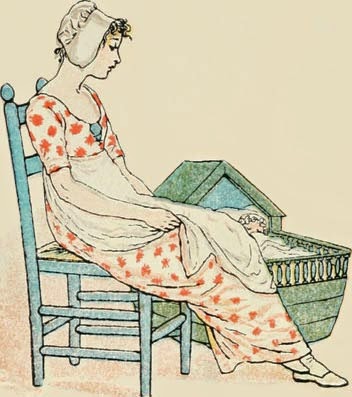 Rock-a-bye baby,
Thy cradle is green;
Father’s a nobleman,
Mother’s a queen.
And Betty’s a lady,
And wears a gold ring;
And Johnny’s a drummer,
And drums for the king. 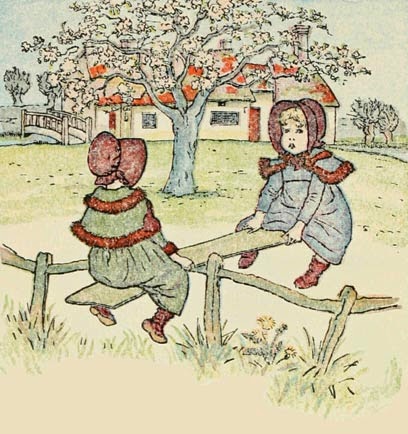 See-Saw-Jack in the hedge,
Which is the way to London Bridge? 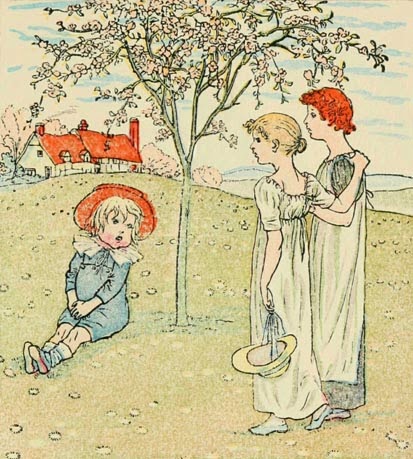 Little lad, little lad,
Where wast thou born?
Far off in Lancashire,
Under a thorn;
Where they sup sour milk
From a ram’s horn. 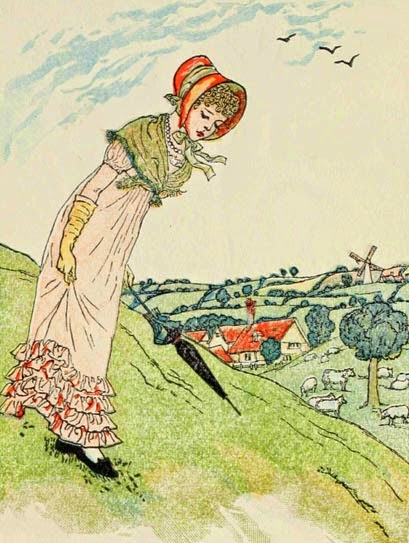 As I was going up Pippin Hill,
Pippin Hill was dirty;
There I met a sweet pretty lass,
And she dropped me a curtsey. 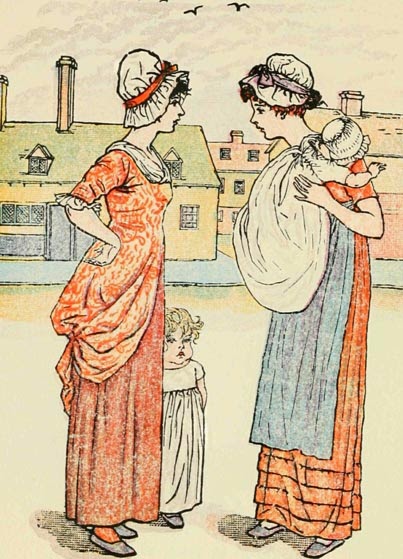 NEWS FLASH: yes, I did find some information about chop-a-nose day. According to the rhyme below, it's a sort of game you play wherein you pretend to chop off a child's nose.

Come to think of it, though we never called it chop-nose or chop-a-nose, my Dad used to pretend to pull off my nose, then stick his thumb through his fingers and say, "I've got your nose." Very funny.

Margery Mutton-pie and Johnny Bopeep,
They met together in Gracechurch-Street;
In and out, in and out, over the way,
Oh! says Johnny, 'tis chop-nose day.

This rhyme is very similar to My Mother and Your Mother, and I believe you play it the same way:

You play it with a child by reciting the rhyme while gently sliding your hand down his/her face. When you get to the last line, you hold the child's nose between your thumb and forefinger, with your other hand you pretend to "chop off" the nose! 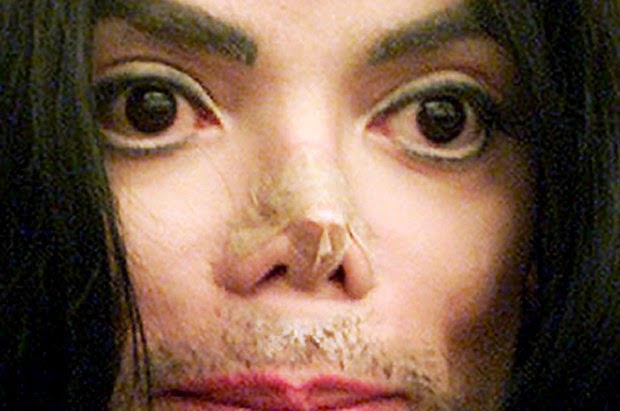 Below is a link to a long scholarly article about the socio-political significance of nose amputation. It just goes on and on. Not surprisingly, it was a particularly painful and vicious, not to mention humiliating punishment for various infractions, including adultery. It would be hard to hide the horrible wound from the world without going about constantly veiled, or not going about at all. I won't dwell on all this, because I can't, but I do wonder if this harmless child's game is an echo of something really horrendous. Well, we still have Ring Around a Rosy, its origins shrouded in the time of the Black Death, with thousands of bodies stacked up and ready to be burned or buried in mass graves. So could chop-a-nose day be a lot more literal than it first appears? 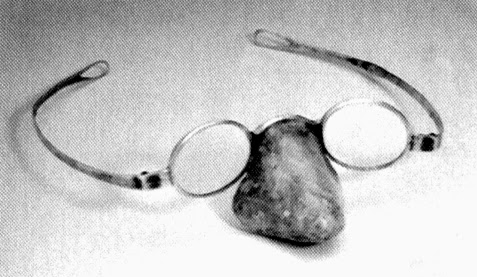 Posted by Margaret Gunning at 7:10 PM No comments: 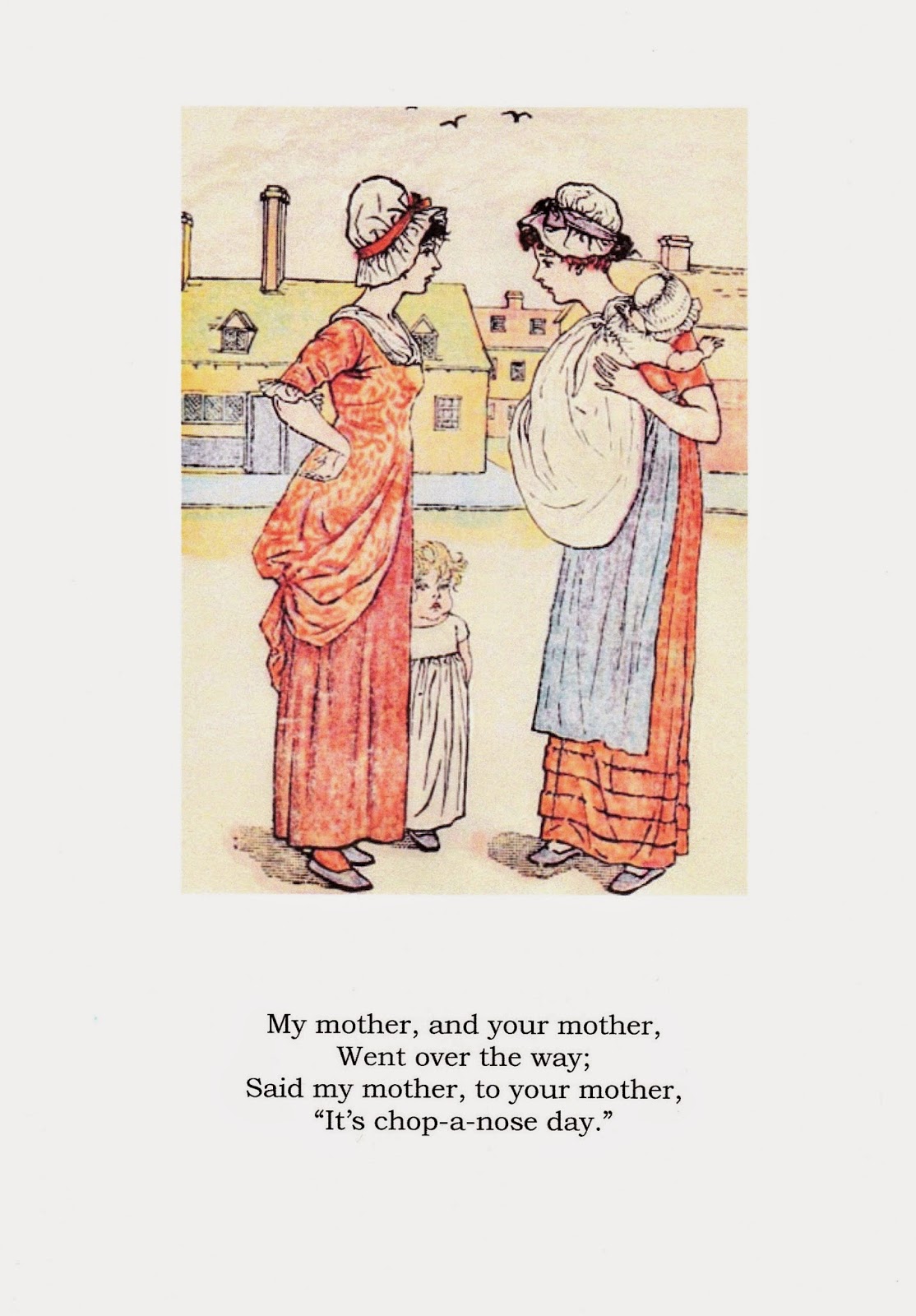 Posted by Margaret Gunning at 12:22 PM No comments:

Posted by Margaret Gunning at 11:01 AM No comments: