This incredibly strange artifact from the mid-'90s is due to resurface in a big way, and in fact I'm surprised it hasn't up to now. (Am I the first to notice?) It's an awful soaper, poorly-acted and melodramatic, and clearly takes sides against Woody (so maybe he's trying to somehow keep it out of public view? Fat chance!). But as a curiosity, it's very. . . curious. Obviously a poorly-made TV movie wouldn't hurt Woody Allen one bit, nor will any of the crap that's going on right now, as abusive patriarchs virtually always walk free, their reputations only enhanced by "restoring their good name".

Facebook is crawling with this awful stuff now (round 2 of what Allen has always called the 'What Scandal?'), and it's horribly fascinating. Did Woody "do it"? Well, what does "do" mean? It is painfully obvious that he did things to Dylan that were intrusive and damaging to a little girl's boundaries/self-esteem. To muddy the waters, Mia Farrow KNEW he was doing those things, and aside from making him go to therapy to "deal with his feelings about Dylan," she did nothing to stop him. She saw him making Dylan suck his thumb (one of the creepiest things I've ever heard of), saw him lie with his head in her lap, facing her, so that his face would be buried in her crotch. And his hairs were found in that infamous attic, to which Allen replied (after lying that he'd never been in there), "I might have stuck my head in there."

I think the public has always seen Mia Farrow as something of a saint, taking impoverished, damaged Third World children into her home to give them a second chance. All very admirable, but that doesn't change the fact that she stayed with a creepy, abusive man for twelve years in the face of dozens of red flags. And it doesn't change the fact that she may have stayed with him  to keep her newly-revived career going. Allen had crowned her the new Diane Keaton, a heady position indeed, but it's just one of the strange things he likes to do with chicks. They're his little dolls, and he can manipulate them any way he wants, professionally, sexually, any-old-way. It makes my blood run cold.

But sometimes these things don't stay buried, and the fallout is generally awful for everyone (see Michelle Phillips and her sad attempt to "heal" her family, blowing the whole thing to pieces). Is there a way to win? Not by soapboxing on either side. Maybe by crawling up out of the muck and leading a satisfying life?

Be happy. Drives your enemies crazy.

There's this weird, oh, I don't know, thing. This paradox. We generally assume, most of us, that being gay in the 1950s was horribly stigmatized, even persecuted, something you had to scrupulously hide in case you were "found out".

You had to be "manly", meaning devoid of any sort of attraction to your own sex. The pressure was enormous. You had to line yourself up with movie stars like Rock Hudson (oops) and Raymond Burr (double-oops), who were then believed to be rampantly heterosexual.

SO WHAT'S THIS SHIT ALL ABOUT?

These are men's underwear ads, presumably from the 1950s, in which men are in such blatantly homoerotic positions that it just makes you wonder. Is this just  "oh, surely not", or a "hey, they're just joshing around" kind of thing?

But think about it. Back then we had male comedy teams like Martin and Lewis, Bob Hope and Bing Crosby. (Crosby and Danny Kaye, later "outed" as gay, even appeared in drag in White Christmas.) We had singing duos who came on Ed Sullivan - what the hell was the name of that duo? I'll have to look it up AGAIN, even though I've looked it up 27 times before. (Sandler and Young.)

But none of them appeared in these kinds of poses, like the one below, with the guy on the left just waiting to be serviced by the other guy, who seems to be getting down on his knees. This ad must have been designed by somebody like Sal Romano from Mad Men, who had to sublimate his illicit passions into his artwork.

Maybe people were gay-blind then. Or they are now, when looking back. Surely it meant something else to bandy about terms like "stretchy-seat"? We just assume everybody was clean-cut and devoid of any non-Doris-Day-humping impulses back then. In fact, if these ads are any indication, it looks like there was lots of very public boy-on-boy action going on, and it was considered completely OK. Stuff that today would make people squirm. 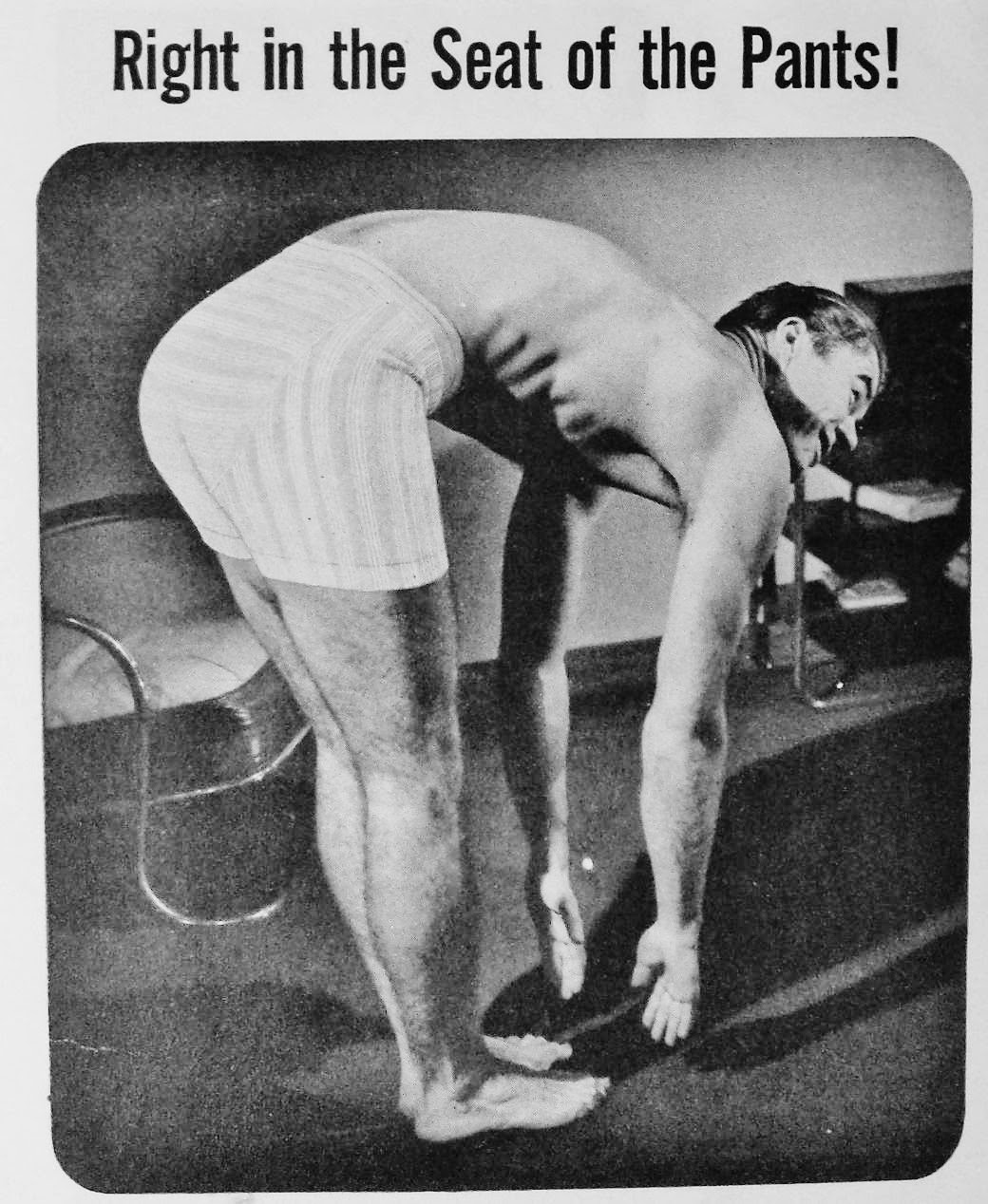 These are ads for a sort of one-piece spandex jumpsuit/panty-girdle for men, with legs in it. Presumably there was a fly in them somewhere (there's some mention of a horizontal fly, a bizarre concept if ever there was one, reminding me for some reason of a sideways vagina), or maybe you just wriggled them down like women did. They had a patented "stretchy-seat" in them (no kidding!) that presumably gave a little testicular support during spontaneous wrestling matches on the living room floor. This was strong enough to contain the most explosive fart, and could not (presumably) be penetrated from the outside. I don't know if the one-piece "union suit" design ever caught on - it's hard to believe that a man would render himself that inaccessible, unless dry humping was the preferred method. 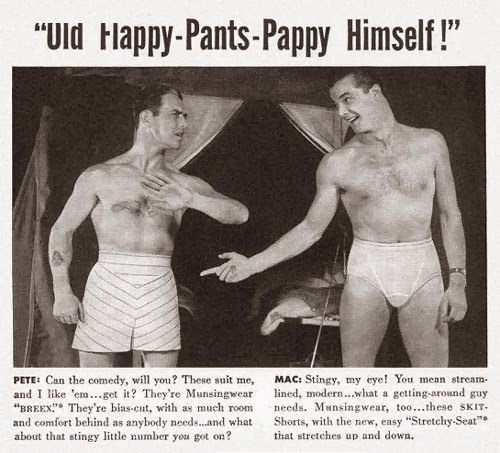 Pete: Can the comedy, will you? These suit me, and I like 'em. . . get it? They're Munsingwear "BREEX". They're bias-cut, with as much room and comfort behind as anybody needs. . . and what about that stingy little number you got on?

Mac: Stingy, my eye! You mean streamlined, modern. . . what a getting-around guy needs. Munsingwear, too. . . these SKIT-Shorts, with the new, easy "Stretchy-Seat" that stretches up and down. 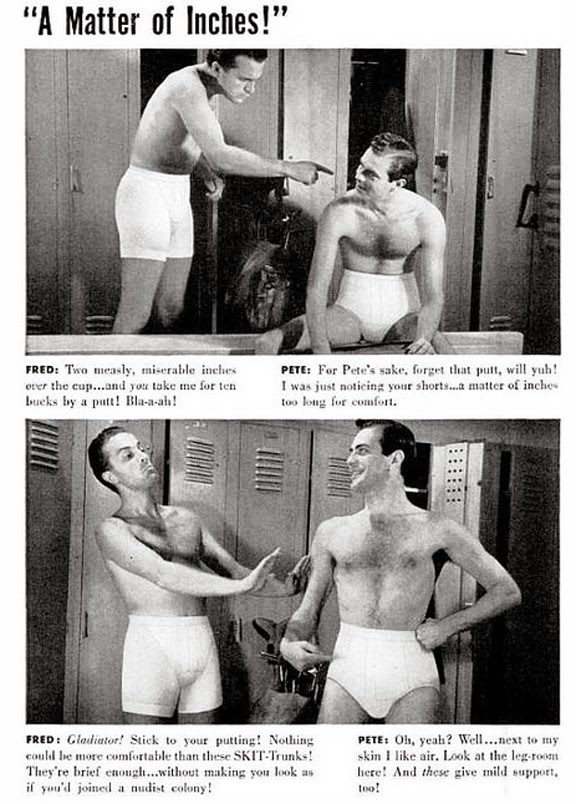 Fred:  Gladiator! Stick to your putting! Nothing could be more comfortable than these SKIT-Trunks! They're brief enough. . . without making you look as if you'd joined a nudist colony!

Pete: Oh, yeah? Well. . . next to my skin I like air. Look at the leg-room here! And these give mild support, too!

It's strange, because I can't imagine the gayest man in the world (Elton John?) discussing "leg-room" and "mild support" (not to mention "stretchy-seat") with ANYONE, even the cutest pool-boy in the world. It's just so. . . not even gay - it's something else - just. . . disturbing. 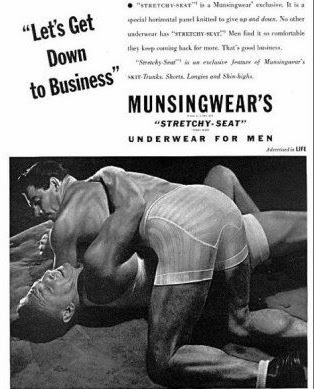 I swear, this guy's butt looks like something out of an old Playtex girdle ad from the 1960s. Unless he has a thigh problem, and men don't usually have cellulite, I just don't get the shorts-like design of these. In fact I don't see how ANYONE could wear one of these, except maybe Ed Wood in his Glen or Glenda phase. He might get in a car accident, after all, and the doctor pronouncing him dead would see it. 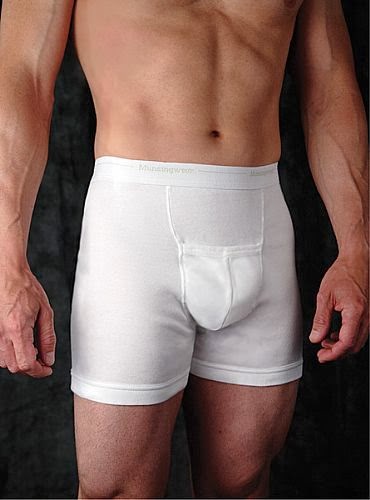 Marlene Dietrich isn't my favorite (that would be Anthony Perkins), but these are nothing short of gorgeous. And they don't go on and on in baroque fashion, like the ones I make. The first and last ones are my favorites.

Posted by Margaret Gunning at 12:27 PM No comments: