These are my first serious gifs of 2014 (under a very loose definition of  "serious"). I started thinking that YouTube must have a lot of very tasty cartoon openings from my youth, but I was disappointed to find that they were either missing, or piss-poor. I couldn't find the original Hoppity Hooper where the frog jumps all over the place, and others didn't even have proper theme songs, if I could find them at all. Many had been taken down: I remember a superb Clyde Crashcup cartoon where Clyde and Leonardo travel to Egypt, and now it's just in Nowheresville. I did find Twinkles the Elephant, but it was a travesty, all of 90 seconds long, with about as much animation as Clutch Cargo. Static is no word for it.

But I DID find Super Chicken!

I remember being crazy about this theme song with its rapid-fire delivery and clever lyrics. I even have a video of Jerry Seinfeld doing this song in front of a bunch of baffled TV executives.

It's not quite as effective without the lyrics (and maybe I should scare them up - excuse me a minute - oh, the internet is wonderful - )

There is someone waiting,
Who will hurry up and rescue you,
just Call for Super Chicken!
(buk, ACK!)

Fred, if you're afraid you'll have to overlook it,
Besides you knew the job was dangerous when you took it
(buk, ack!)

He will drink his super sauce
And throw the bad guys for a loss
And he will bring them in alive and kickin'
(buk, buk, buk, buk)

This is my other find, and in superb shape. Who could forget Tennessee Tuxedo, with Don Adams in the role he was born to play: not Maxwell Smart, but a penguin. The walrus sidekick Chumleigh was a nice touch, along with the guy hunting them with a rifle (was that Commander McBragg or what?). The theme song was the best: "Come on and see, see, see, Tennessee Tuxedo. . ." Yes, Tennessee Tuxedo and his "tales".

If these cartoons have a similar flavor to them, that's because they were all cranked out (inexpensively - can't you tell?) by the same animators, Jay Ward and Bill Scott, who did Rocky and Bullwinkle. Back then you didn't have to spend much to make wildly popular cartoons, as witness Hanna-Barbera and their primitive creations. In addition to the Flintstones, Jetsons and the immortal Scooby-Doo, H-B also pumped out  Adam Ant, Secret Squirrel, Auggie Doggie and Doggie Daddy, Lippy the Lion and Hardy-har-har, Snooper and Blabber, Yakky Doodle, Ricochet Rabbit, Punkin Puss and Mushmouse, and let's not forget "that gorilla in the window", Magilla.)

Frustrated in my attempts to reproduce the gloriously cheap cartoons of my youth with gifs, I had to reach farther back, and blacker-and-whiter too. There used to be a show that came on, oh, "whenever", sort of like My Friend Flicka which literally made my heart pound, I loved it so much. This was a British thing called Tales of the Riverbank, a loose ripoff of The Wind in the Willows, that kept playing endlessly in Canada in various guises, at one point called Once Upon a Hamster. It featured a British narrator and a bunch of animals which were given different (all irritating) voices. This appears to be the very first episode, and it's complete in only 13 minutes, so maybe they had two of them in a half-hour. I like the interplay between hamster, and frog, and hamster, and frog, and hamster, and frog. . . In the wild, that frog would have snapped his tongue out and whipped that little vermin into the half-circle of his gaping mouth in less than a second. Maybe it was like people who own an anaconda or something, having to go through a lot of live mice in a week. 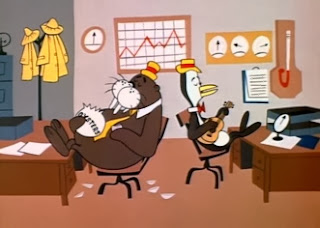 ADDENDA: I found the Tennessee Tuxedo lyrics, more complex than I remember, with more verses and even a sort of (gack) philosophy of "learning something new". We do NOT want to learn from cartoons. Period. Ever.

(I realize I have disincluded so many - Don Adams' later, perhaps more famous character, Inspector Gadget; Underdog, voiced by Wally Cox; Linus the Lionhearted, with Sheldon Leonard. . . "and", as they say,"many more". There was even a bizarre sort of sendup of the hamster shows which ran when Caitlin was about five. She would scream with delight whenever it came on (if it came on at all). It was called Tumbletown Tales, starring a very fat cream-colored hamster called Tumbleweed. Old hamster shows never die, they just change form and carry on.)

Posted by Margaret Gunning at 5:39 PM No comments: