It's just that there are so MANY of them! I feel as if I'm walking through the Louvre. The Louvre of bad Santas in really bad cartoons/Christmas specials. This one is from a monstrosity called Santa Claus Conquers the Martians, rumored to have Pia Zadora in it (and whatever happened to - ?) This scene is as inexplicable as all the rest of it.

Clarabelle and The Man in the Stripes. And incidentally, why was a male clown called Clarabelle?

From an insane puppet Christmas special, 1950. The marionettes in this thing are Stepford-esque. Santa has a manic quality about him.

Not a show exactly, but an artifact, a battery-powered moving Santa with death rays coming out of his eyes. But it's even worse when he's turned off.

Posted by Margaret Gunning at 11:15 PM No comments:

Let's call it 'Twas the Night Before Solstice 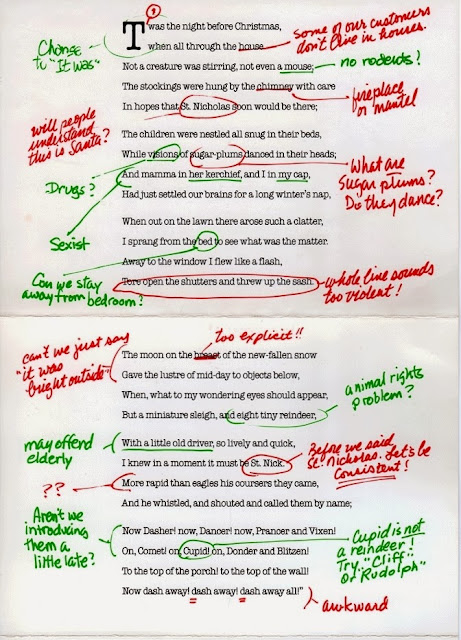 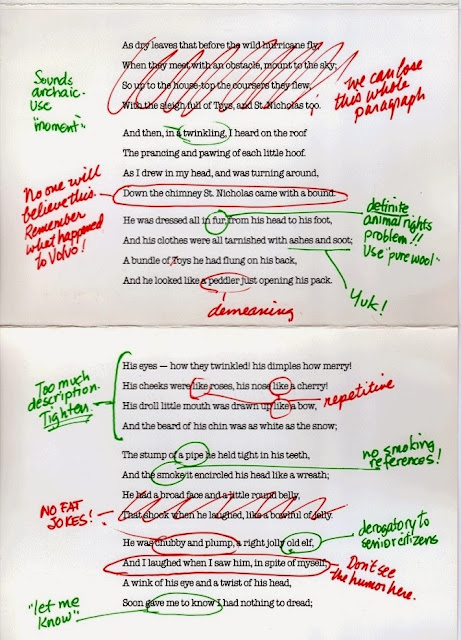 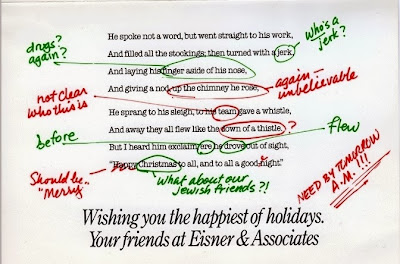 http://members.shaw.ca/margaret_gunning/betterthanlife.htm
Posted by Margaret Gunning at 3:46 PM No comments:

Yes, it's here again - the competition of a lifetime, or at least this week. Back when I could make really great gifs on the new program, Gifsforum (I mean last night), I did some kick-ass weird Santa ones from old cartoons and childrens' programs. Oh, and then guess what? The whole thing shut down. It stopped working. I can't find anything on the internet to explain this, as it does not seem to happen to anyone else. There should not be a quota! Gifsforum, when it worked (last night!), would do a 15-second video of pristine quality in less than half a minute. Well, back when it was working. Now it has stopped.

Like my mouse. Something supernatural is happening with my mouse. Or mice. A few mices ago, my mouse just conked, and I finally had to put a new battery in which seemed to solve the problem. A week or so later, it conked. Bill gave me a brand-new one, I put a battery in, and a week later it conked. On the THIRD mouse I began to suspect supernatural forces, or a batch of bad batteries. My son the computer genius, who has NEVER been stumped by a problem, has no idea what this is. Like people who can't wear a watch because it stops, I get huge, searing, visible electric shocks off car doors, and I don't know of anyone else who does. I have to literally ground myself with my elbow when I get out. What the fuck?

Perhaps that's the price of toying with supernatural forces. Never mind, here are the few I made before this disaster took it all away from me again.

The first Santa looks like something from the Third Reich: the Hitlerian gestures, swaggering and head-shakes. This was part of an archaic Punch and Judy show that was indescribably violent.

And this one. Just what is Santa doing under the bedclothes? At one point he appears to give himself a narcissistic kiss. I don't think children should see things like this.

Santa in blackface, looking menacing during his yearly break-and-enter. In the old cartoons, his bag always has patches on it. Obviously he is from the Al Jolson school of chimney-sliding.

Santa burns his ass off.

The strangest video, a movie shot in 1898 when most movies lasted a minute or so. Here Santa is wraithlike, carrying something like a bush (a Christmas tree?) This was one of the 15-second ones that I'll never make again because it has all STOPPED WORKING.

And here he is. . . winner of the 2013 Creepy Santa Smackdown! Are those his teeth that he is baring under his moustache? If so, he also wins the Evil Santa award. The things you find on the internet. Until Gifsforum stopped working.

As everyone is aware, now is the season of love, laughter and creepy old cartoons. The best ones come from the 1930s, early '30s if possible: there are examples from the '20s, but to my taste they're a bit primitive. Who knows whether this one, Toyland Premier (a direct ripoff of Disney's Mickey's Premier, full of moving celebrity caricatures) was in color originally, or if someone filled in this gory and somehow voluptuous red.

The point is, my favorite YouTube-to-gif site, Y2gif, has gone bust, or at least catawampus. It won't do anything for me. If you enter the info, the web page code, as you're supposed to, this little thingie swirls and swirls forever, until it "times out". The fault is theirs, so the page tells us. So fuck 'em. I CANNOT wait any longer to make holiday gifs!

The search was on for an alternate, and fortunately there were several, because the first one I tried was so shitty it made me want to scream. The videos could be barely 5 minutes, the gifs were no more than 5 seconds, and it took at least 10 minutes for your poorly-made gif to be finished. So it was with a great gasp of astonishment that I found Gifsforum.com: not only did it take much longer videos, upwards of 15 minutes or maybe longer, it would also produce a large, high-quality video of UP TO 15 SECONDS  in a very short space of time.

Thus the dancing clowns, moving in a seemingly endless loop. I'm wondering now whether to remake all of my Harold gifs, but the thought of it is exhausting. Harold makes my heart ache these days, like a lost love or someone who has gone overseas to fight. You don't know if you'll ever see him again, and you never did get as close to him as you wanted. You got close enough to notice he always smelled good, and that's a rare trait in a man. Nothing special or fancy, just a tinge of tweed or saddle leather or even fresh hay.

I yearn because even though the hard part is supposed to be over, it ain't. If no one is interested in my work-of-the-heart, something is going to die inside me forever, and I know it. So I keep the home fires burning.

And just look at these gifs! Juicy, long gifs. I compare here the same logo on 2 different programs:

I think Gifsforum does something to these pictures, sharpens or crops them or something, because they lack that muddy black-barred quality. My favorite Harold reaction, the incredible 15 seconds while sitting in a chair 20 stories high, giffed up beautifully with no problems. Gifsforum also has a lot of alternate settings for size, speed and even color effects, though I have no idea what they mean. (They'll also run backwards.) Y2gif had only one real advantage: a feature that made them much harder to set up, but often produced the best effect. You could literally set the video for hundredths of a second, so that there would be no extraneous material to mar the little gems, the micro-videos these things truly are.

I've never been a filmmaker before, and this is likely as close as I will get. But goddamn it! These things are fun. I can spend hours doodling and diddling with them. I know some people can't stand them, and most of them seem to last less than a second so that the effect is stupid and jerky. Now that they're getting longer, who knows. All that needs to happen now is that someone will post Why Worry? in parts, so I can take Part 3 and excerpt the final, sizzling-hot kiss at the end, the only truly passionate Harold Lloyd kiss  in his repertoire (and rare in the entire silent comedy ouevre). Given that Harold had just started his first serious extramarital affair with his co-star, I think this kiss speaks volumes about where both of them were emotionally and sexually. Imagine having to take and retake, over and over, the way he seizes on her, catlike, like a great lion grasping a lioness by the back of her neck while they mate.

Enough of this, I've got to go trim the eggnog or whatever. I have seriously mixed feelings about this time of year, can be as fatuous as a puppy-dog when the lights start to ring-ting-tingle (or is that the bells?). Then I just sag into this morose mood that seems to have no end. My dreams seem to be slowly washing downhill, eroding like a sand cliff eaten by waves.

Never mind, everybody,  Santa's coming, let's all cheer up!

Posted by Margaret Gunning at 10:00 AM No comments: