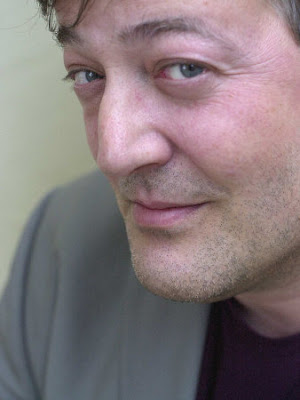 Since this is a lovely and balmy day,
Let's look at a certain man today.

Not just any man, you see
But a man who is funny, ho ho ha hee. 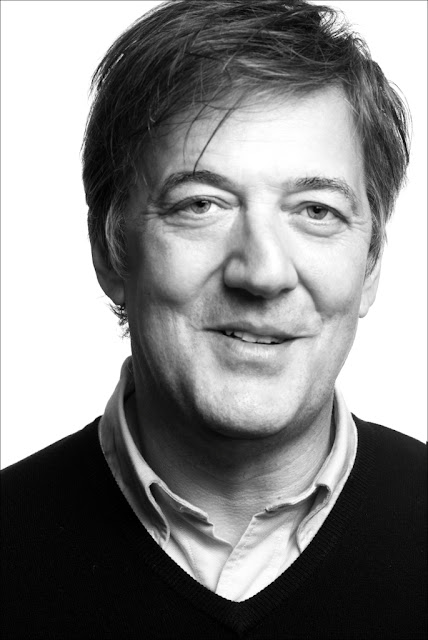 Stephen Fry, Stephen Fry
When you come on public television,
it's almost like I die. 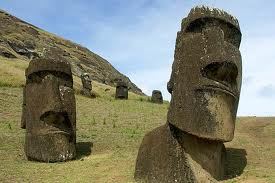 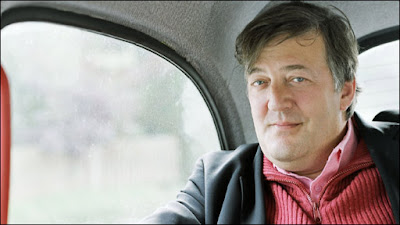 When you talked about Wagner
and Hitler and such,
I saw your green jacket
and just liked it so much.

You lost a lot of weight there,
you great big kermudge,
But I'm glad you found a shrink or
your brain might now be sludge. 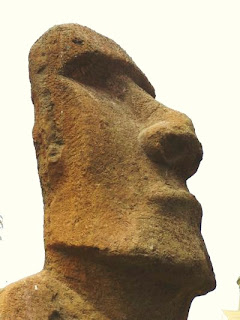 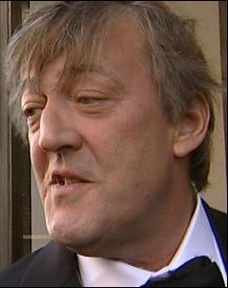 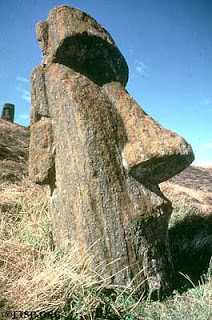 Stephen Fry, Stephen Fry
When you go off to Bayreuth it just makes me cry.
When you sat down to play that piano so great,
It made my heart kaboom and palpitate.

And you surely got my sympathy vote
When you tried to hit one key and got the wrong note. 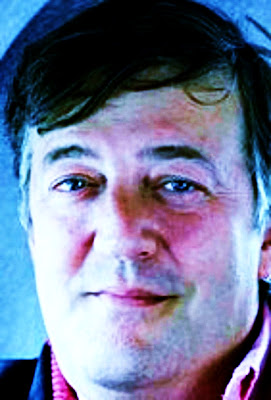 And when you did that show on bipolar disorder,
It made me just pack up and run for the border. 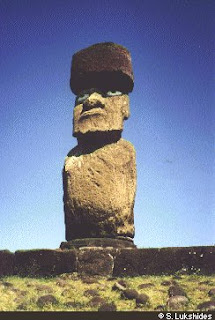 Stephen Fry, Stephen Fry
You drive me all nutty, I don't know just why.
Maybe you're crazy, that's part of your myth,
And even if you're gay I just wait for your kith. 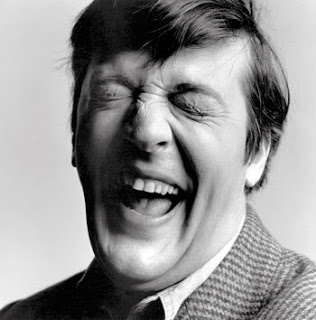 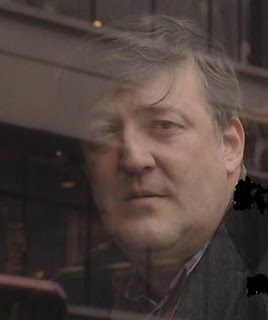 I found out at last why girls like you so,
And boys of course too, vo-do-de-o-do.
Your face is all craggy, it looks so unique
Like Easter Island or a great mountain peak. 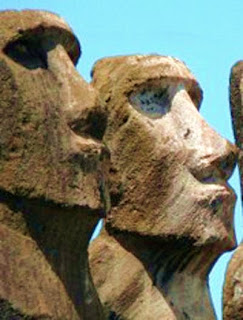 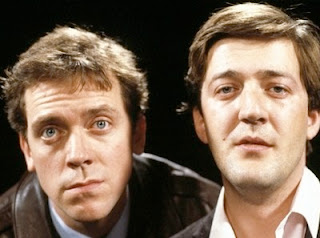 Yes, you have that Stonehenge look, you know
That makes the women moan very low. 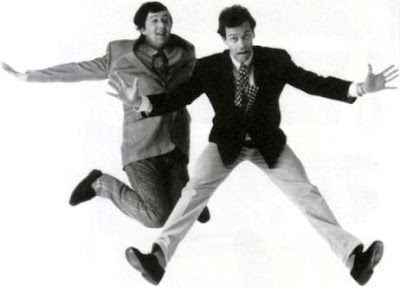 I don't know how you do it, so effortless it seems,
So forever, silly person, you will dwell in my dreams.


BLOGGER'S NOTE. This is a summer repeat, but for a good reason: we've been seeing a lot of Stevie in the news these days, sounding off about the wretched goings-on in Russia. And well might he rave. The Russians suck at tolerance and compassion and just throw whatever rocks they want to, and their attitudes are worse than the assholes in that Oscar Wilde movie he was in,  so somebody had to get up there and sound off! And who better than our Steve. Besides which, I think a lot more people listen to him than to that boring old Putin. Russians! Remember when Brezhnev opened the Olympics and went up to the podium and said "O, O, O, O, O"? It was the most original thing he ever said. P. S. the formatting is really weird in this one cuz that's how I used to do things before I knew how to blog - I think it looks better actually - good night. 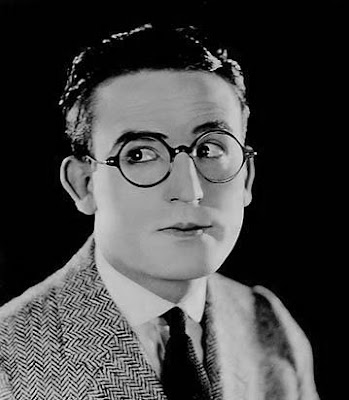 If I may repeat the obvious, this blog, formerly titled margaret gunning's house of dreams, has been renamed after Harold Lloyd's famed movie character. For reasons unknown, Harold called his screen persona the Glass Character, which is nice because it sounds so romantical-like and is also a great title for a novel.

Which I have written. Which came out in spring 2014 with Thistledown Press. Watch for it!

Meantime, the search for Lloyd curiosa is endless. I just keep finding things. He was the Star Wars or Sponge Bob of his day, spawning an entire industry of Harold "stuff". Back then the stuff was mostly tin, plastics being pretty much uninvented. These are toys that you just don't see any more, toys that in fact baffle me because I don't know what they frickin' ARE.
Harold Lloyd Long-Leg, Long-Arm Sparkler 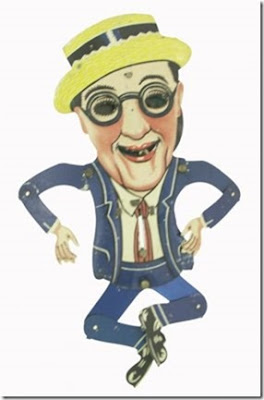 Description
Harold Lloyd Long-Leg, Long-Arm Sparkler Moving arms and legs. Still emits sparks when plunged. Made by Isla in Spain. Circa 1925. Very rare. From the collection of Gary Selmonsky. Tin. 9". (Excellent).
About this, I can only say *WTF!?* a few hundred times. I have no idea what a sparkler is, so I've had to come up with a guess. Judging by its arms and legs, which appear to be jointed, this thing must have had a sort of seizure while you "plunged" it. Plunging implying a sort of pumping up and down, as with those old spinning tops. Why would it throw sparks? No doubt the grinding of metal on metal, meaning it might also have made a hideous noise. In the wrong hands, this thing seems dangerous, perhaps a forerunner to the cigarette lighter or barbecue starter. Certainly it should never have been given to children. As for the eyes, or lack of them, I'm glad I don't have one of these around the house because it might turn out to have "powers", I fear of the wrong sort. 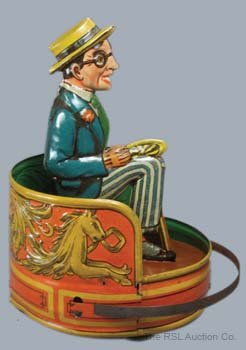 Attributed to Gunthermann, c. 1926, clockwork driven, famed character sits at amusement bumper car, very colorful tin lithography, extremely hard to find, scarce version. 51/4" h x 3 1/2" dia.
Now THIS is cute, and I wouldn't mind having one, especially if it still functioned, twirling all over my desk. The depiction of Harold in tin is nicer than most. It reminds me of the movie Speedy and various others in which he hangs out at Coney Island. Imagine if you had a whole lot of them: you could play Harold Lloyd bumper cars all over your desk!
Harold Lloyd Mechanical Bank

Tin. Saalheimer & Strauss, Germany. Circa 1920s. Pull the lever down. The mouth opens and the tongue sticks out. Place a coin on the tongue and release the lever. Provenance: F. H. Griffith, Stephen Steckbeck. Condition Near Mint.
This is also cute, and very fine because Harold looks a whole lot more like his sweet self, except that the eyes are brown which is wrong. Harold had black-Irish or Welsh/Celtic coloring, very black hair, blue eyes and fair skin with copious freckles, which never completely faded with time. No one got it quite right in tin. But  this contraption seems all very charming, until you read the description of what it does.
It eats money. Pull a lever down and he sticks out his tongue, and you put a coin on on it and he - oh I don't know, I guess a lot of mechanical  banks worked that way back then, and a child might find it enchanting. But it bizarres me out big-time. I hope they didn't have to smash him like a piggybank when he was full. Oh Lor', oh Lor', I'm going back to bed now. This is a NIGHTMARE. Harold has a frog on his hat and looks like a dead thing. He isn't even scissors, not actually, though you stick your fingers in those round things (I guess) and work them like scissors. Maybe he lifts up his frog hat or something? 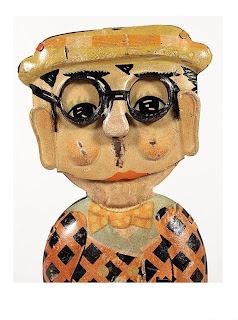 Description all written in German, but presumably it's one of those wretched walking windup toys that grimaces and rolls its eyes. 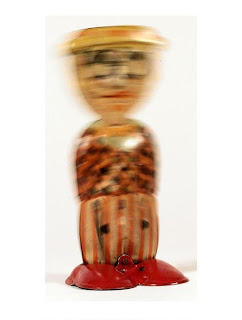 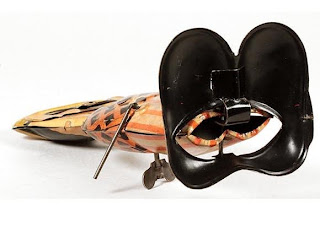 POST-BLOG. While scrounging around for Harold toys, I found this. It's not a toy, and not even an antique, but a darling little glass Christmas ornament made for "the new millennium" (remember that? The big date that completely fizzled?). Probably worth gazillions of dollars, because extremely fragile. My cat used to knock glass ornaments down off the tree and play cat-hockey with
them, stick-handling them under the sofa where they would moulder for years, or (more likely) batting them against the wall and breaking them. Let's just be
grateful he never got his paws on Harold.

Produced only for 1999 as one of the millennium exclusives, this European hand blown gl ass ornament promises to endure through the generations! Hard-to-find and sought-after!

The depiction of Harold Lloyd holding on to the clock handle draws upon the famous scene in 1923 film, "Safety Last". Classic ornament that combines the famous clock hanging scene with the onset of the new millennium!

Wearing a green check jacket, brown pants and his trademark hat, Lloyd hangs precariously from the hands of a clock, high above the street where spectators gasp with surprise and horror. Will he fall? And how did he get there?

The death-defying scene, one of the most famous in silent movie history, is taken from "Safety Last", released in 1923. After taking one dangerous step after another to scale the department store in which he works as a low level clerk, his straw hat falls away as he desperately holds on for dear life. However, he wins the $1000 prize by attracting the most ever attention and business to the store, fulfilling his promise to his girl to make good.

On the back of the clock, written in white and surrounded by confetti, is, "Happy New 2000 Millennium". Almost a century later, Lloyd continues to be remembered as one of the great Golden Age of Hollywood greats!

Along with Buster Keaton and Charlie Chaplin, Harold Lloyd revolutionized screen comedy, becoming one of the most respected stars of Hollywood's Golden Years, He began his film career after tossing a coin that pointed him towards Hollywood and became the lead in over 200 films from 1915 to 1947. He was the #1 box office attraction from 1927 to 1928 and won an Honorary Academy Award as "master Comedian and Good Citizen" in 1952.

Approximately 4 1/2 inches tall, the ornament has outstanding promise and is a "must have" for the Hollywood Golden Age collector.

(Imagine finding THIS under your tree!)

POST-BLOG BLATHER: I nearly forgot the best part! There's a YouTube video of one of the best Harold windup toys of all. It's pretty hideous, as they all are, but damned if I didn't make them into gifs anyway.