OK, so. Here's how this started. I sort of go on and off some things, for example, The Twilight Zone, which I like watching (sometimes) because I remembered watching it as a little kid and being scared out of my mind. I wasn't allowed to watch it coz it was too scary, but I watched it anyway, or I had my older brother Arthur describe them to me, which was sometimes even better than the show.

He also described a show called Medic, which I now realize had Richard Boone in it whom I later liked in Have Gun, Will Travel and Hec Ramsey. At the time Medic was considered extreme because it dramatized medical procedures that you weren't a-spozed-ta know about. I never did see Medic, though I did find out something about gangrene.

With The Twilight Zone, everyone remembers certain episodes. They just stick in your mind somehow. This is unusual because the show went on for years and years and must have had hundreds of episodes. I'm watching them again on a very strange Newfoundland channel I stumbled on the other day. It's supposed to be "Canada's Superstation", but it isn't even in HD and has the most lame local programming, wrestling shows and entertainment hostesses with strong Newfie accents.

Every night they show something called Scenes of Newfoundland, and it's always the same old guy singing a sea shanty and shots of a golf course. I won't get into the other shows, such as Newfoundland and Labrador Paranormal, which consists of two guys in lumberjackets sitting on the floor of a kitchen at night smoking cigarettes and yelling, "Hey! Come out of there!"

But they do show The Twilight Zone every night, which is what got me watching them again.

Rod Serling strikes me as an earlier incarnation of Stephen King, with his squinty-eyed looks and odd voice, his slight creepishness which - well, did he really talk that way all the time? When he talked to his mother, for example? Never mind. Certain episodes stick in your head, and in my case I think it was exactly three.

The one EVERYBODY remembers is the guy on the plane, the nuts guy just out of the asylum who starts seeing a giant teddy bear running around on the wing. It's one of the early examples of Shatnerian excess, and it's wondrous to behold. We forget how beautiful Shatner was back then, a real matinee idol - this was well before Captain Kirk, don't forget, when his hair had already begun to thin and his waistline to expand. (And isn't it strange how he has more hair now than he did then?)

There are a couple more Shatner episodes in the series in which he's much more subdued, but no less a fox. I always watch out for them.

This is a personal favorite because I like watching people fall out of windows. Three do in this episode, but this is the important one. In fact, I think four do, cuz the French guy ends up falling out too, but you know what? I left to get a drink of water, so we'll never know.

This one, though. It's the ultimate, the one I will remember on my deathbed, about the meek little man whose wife bosses him around and doesn't let him read, and then there's a nuclear war and all of a sudden he has all the books he wants, and all the TIME he wants, and his glasses fall down and then. . . When I saw it this last time, it was interesting because I had forgotten all about the giant clock lying on the ground. Of late I've been reflecting on such things, not just time but the way we keep time (as if we can keep it!) and try to clutch on to it. The surrealistic clock images in Safety Last! and Metropolis have a strange kinship with this dark dystopia, this blasted library full of books so long overdue they're nearly vaporized. I will leave to better minds the profound existential significance of that Cover Girl ad. 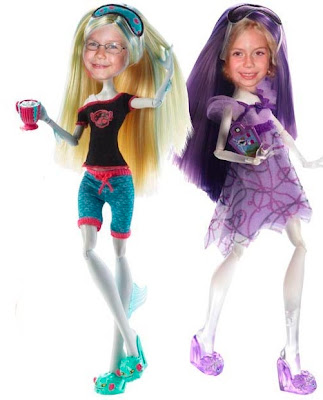 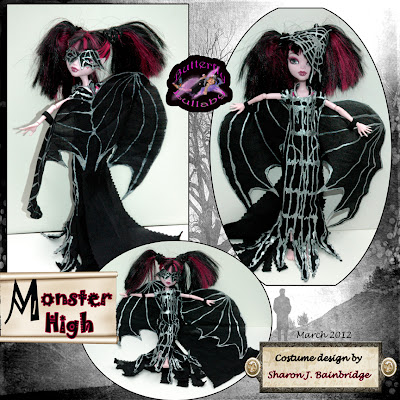 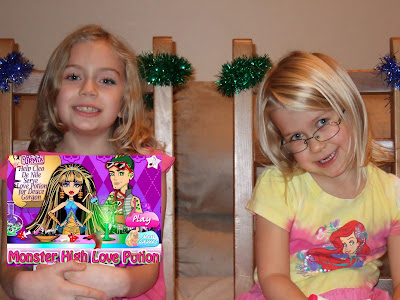 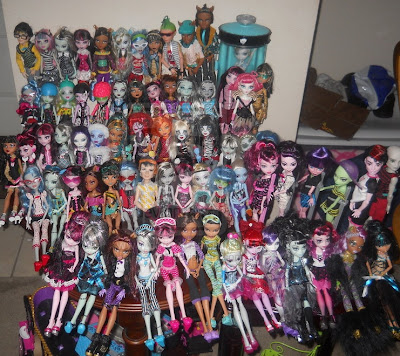 “What if WE could be Monster High dolls? Wouldn’t that be fun?” Erica asked. 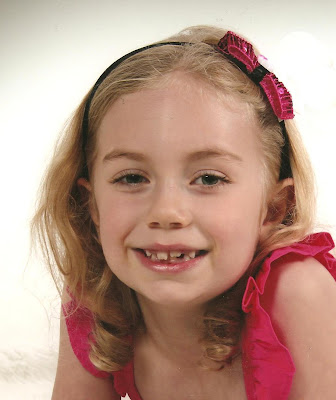 “It’s a great idea. I’m going to wish I was a Monster High doll.”

“Be careful what you wish for,” Lauren warned her. 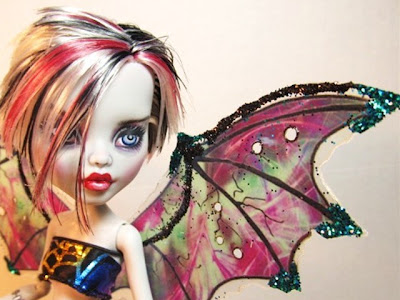 But Erica did not listen. 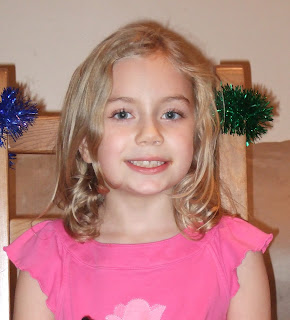 “No, you’re doing it wrong,” Lauren said. “You have to have a wishbone or a star or something, to wish on.”

”I thought you said it was a bad idea.”

”I want to see if it works on you first.” 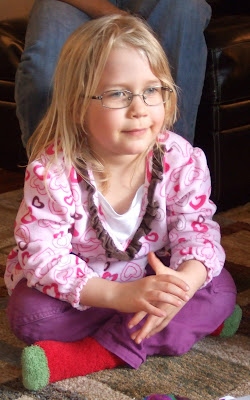 So poor Autumn had to stay still while Erica wished on her. 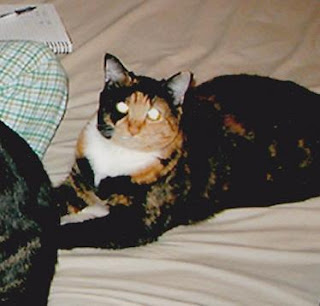 “Hey wait a minute, you have to decide WHICH Monster High doll you want to be,” Lauren reminded her.

“I want to be able to change into different dolls any time I want to.”

“Oh-oh,” thought Lauren. “This girl is going to get into trouble.” 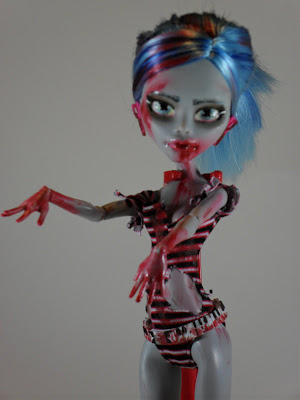 But just then, a strange sort of mist wafted into the room. It was green and didn’t smell very good. 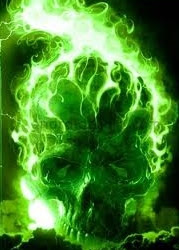 “No, I didn’t. It means the spell is beginning to work.”

Erica had a very weird feeling. It felt like she was turning into someone else! ”You have to try this, it’s neat! Just wish on Autumn!” But by this time Autumn had run upstairs to use the litter box.

“Just wish on anything, then,” Erica told her. 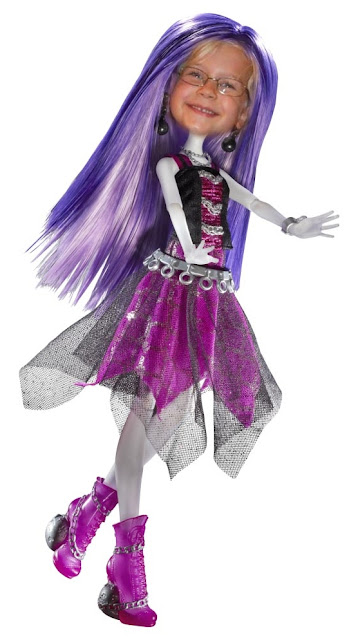 Poof!  She had turned into a Monster High doll!

“Let’s test it out. I want to change dolls now. POOF!” 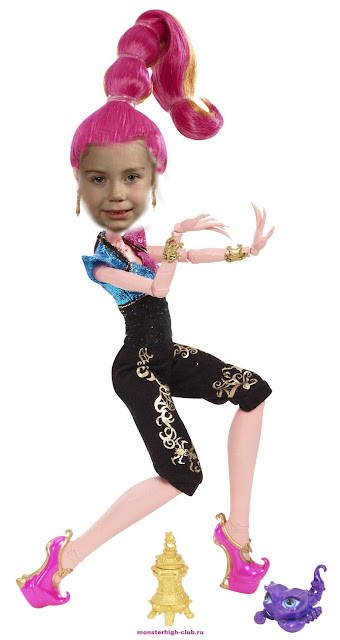 It worked! The girls could change into any doll they wanted to.

But then something strange happened.

Thud. Thud. Thud, down the stairs. Who could it be? A giant? A witch? 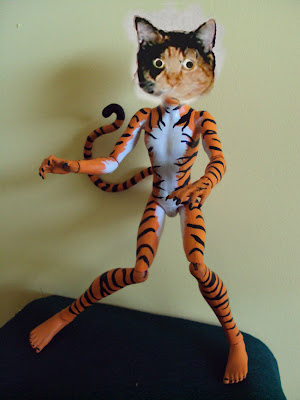 Could this be Autumn? Oh, no! She was hideous! She looked like a monster!

She must have been caught in the spell!

“Hey, you started this!”

“Autumn, I wish you would stop looking so scary!” 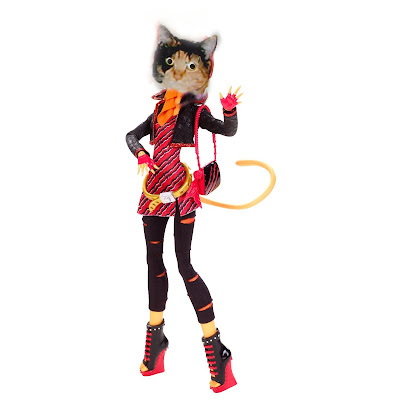 Then something even worse happened.

There was something moving under the sofa. It had a lot of legs.

Autumn reached under the sofa with her paw and dragged it out. 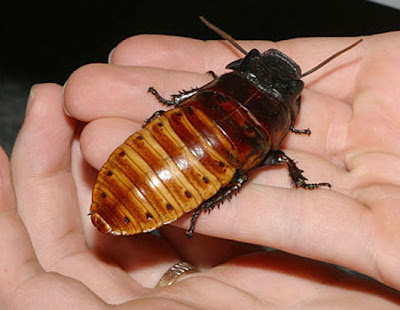 IT WAS THE BIGGEST, WORST,  MOST DISGUSTING BUG
THAT EVER LIVED! 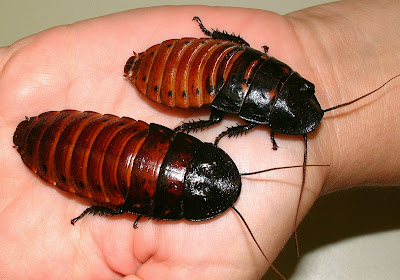 Then Autumn put her paw under the sofa again.

“No, Autumn, NO!” the girls cried in unison. But it happened again.

Now there were TWO disgusting bugs! 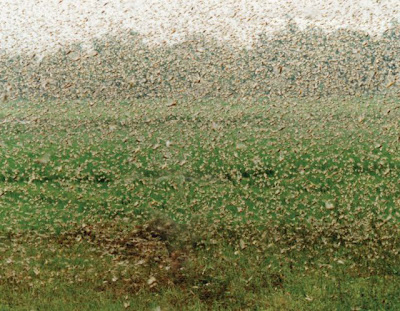 “Look!” Erica pointed to the back yard. It was full of a million bugs!

“I’m not going out in that,” Lauren said.

“And look at those scary cats.!” 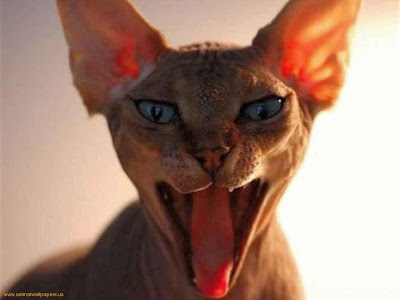 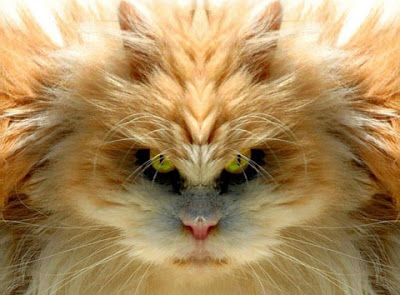 “They must be Autumn’s new friends.” 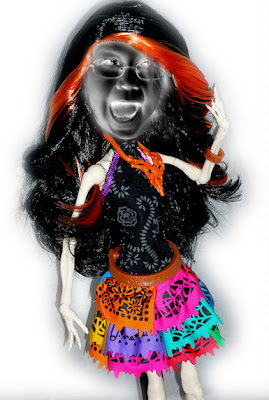 Lauren tried to scream. . . but no sound would come out.

Erica realized that what Lauren was telling her was true: they would be Monster High dolls for the rest of their lives. It might be fun, but there would be a lot of bugs.

Then suddenly, Mummy and Daddy appeared in the door. 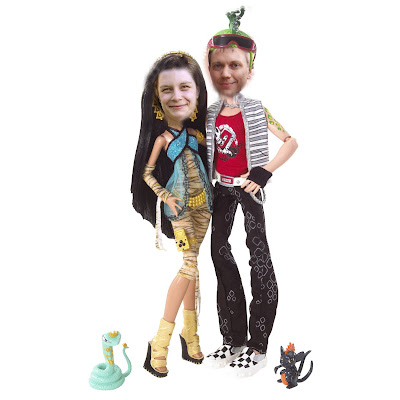 Something had changed. Mummy and Daddy were MONSTER HIGH DOLLS, just like all the rest of them!

“I told you this was a bad idea,” said Lauren.

“How are we going to get out of this?”

It was true. Daddy looked weird, and he was getting weirder. Mummy looked so strange, you couldn’t tell who she was. 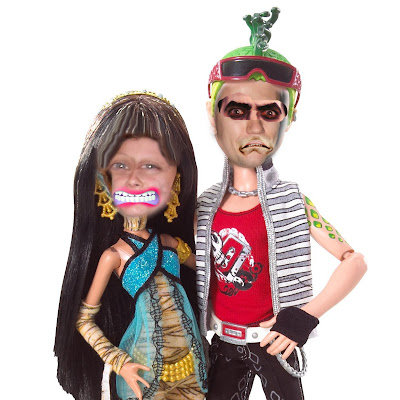 Suddenly a million bugs began to crawl all over the floor! Everyone was swallowed up in a green fog! Help, help! 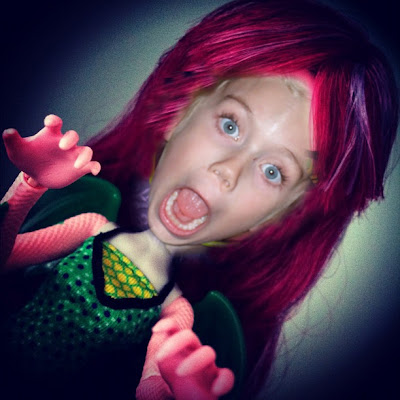 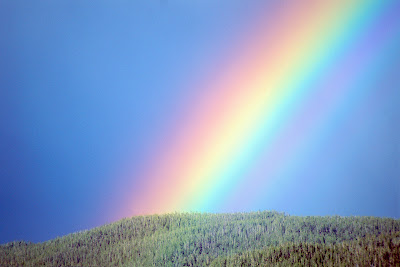 Had it all been a dream? It was as if nothing had happened at all. Everyone was back the way they had been before the Terror at Monster High.

“You think it was fun? Then how about THIS?” 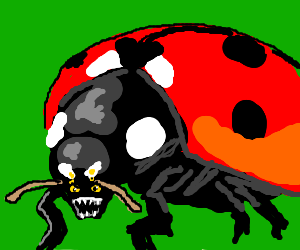 She pulled a giant bug out from under her shirt and stuck it down Erica’s back. Erica screamed and ran out of the room so fast she left a trail of fire. 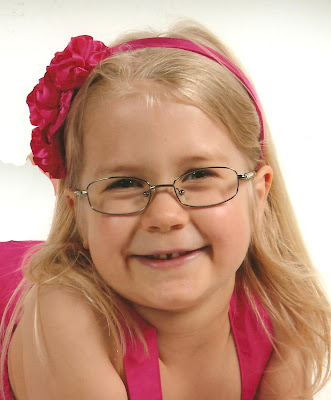 “I told  her to be careful what she wished for,” said Lauren to herself with a smile. 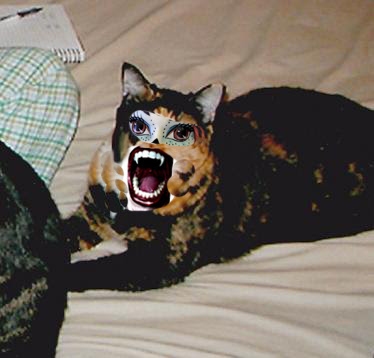