(Note. I've dealt with this issue before in a previous post, but every time I see a new Charmin ad I have to update this due to their absolute genius for presenting their product in the most astonishingly offensive manner possible. And yet, the ads just go on and on. And so must I. . .)

When I first saw one of those Charmin ads - you know, the ones with the cutesie cartoon bears running behind trees to take a royal dump - I was pretty offended, but I managed to more-or-less tune it out.

But then they escalated. 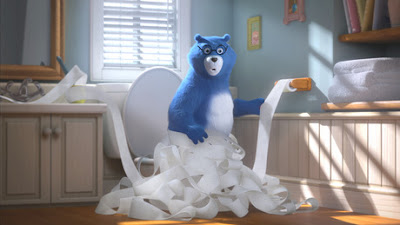 The Mama and Papa bear seemed highly concerned with Junior's wastefulness in the TP department, but the nice Charmin voiceover convinced them that with their brand, you could "use less". At the same time, Junior developed a problem: "Little bits left behind," requiring regular rectal inspection from Mama.

Little bits of what? I had to ask myself. And if it was toilet paper, why were they sticking? It didn't "bear" thinking about.

But then I noticed the annoying Baby Bear announcing at the end of the commercial, "We all go. Why not enjoy the go?" 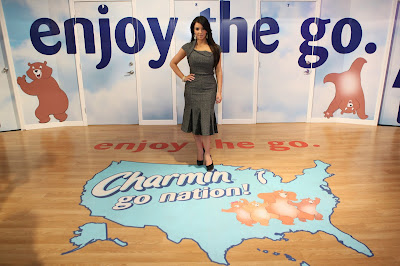 I wondered if I was the only person who was completely astonished by this bit of business. Characteristically, I went on an internet search and found so much shit I couldn't believe it.

Proctor and Gamble decided, in some bold and possibly idiotic move, to rip the inhibitions away from bathroom functions, to elevate urination and defecation to the lofty and even fun level they deserve. We should all be enjoying our basic bodily functions, not just getting them done so we can get on with our day.

Interestingly enough, when I look up samples of Charmin ads on YouTube, ALL the comments are negative. NONE of them think the bears, including the shitty-assed Baby Bear, are cute. The newest ad is even more jaw-dropping: Charmin will, apparently, help you keep your underwear clean. (And this in full knowledge of the fact that these bears don't wear any clothes.)

I honestly don't know why this headspinningly offensive campaign is still on the air, but it just goes on and on, year after year, continually upping the ante, so to speak. One wonders what's next: actually watching the bears go grunt, grunt, plop? How much more explicit can these ads be?

(As an aside: why are there three colors of bear: red, blue and brown? Does the brown bear really get down to it, and will we soon be subjected to the fruits of his labours?)

Below I quote the only article I could find that deals with this embarrassing subject to any depth. But even this piece isn't complete. To kick off their cute new campaign, a few years ago Proctor and Gamble set up a sort of Defecation Expo with gigantic toilets and Disney-like washroom cubicles. Their public ambassadors, all fresh-faced and attractive, had to be people who "really, really enjoy going to the bathroom". One of their slogans was, and no, I am not making this up, "sit and squat". 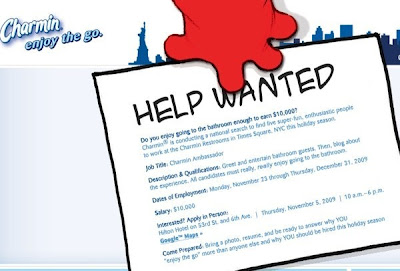 In 2006, Charmin opened up public restrooms in New York City's Times Square. The location is now a new Disney Store. The convenience of having clean restrooms in Times Square during the Christmas season was a novel idea. There is currently no news of a 2013 Charmin restroom location at this time.

In case you can't quite make out the want ad above, some of the most unbelievable lines are:

"Do you enjoy going to the bathroom enough to earn $10,000.00? Charmin is conducting a national search to find five super-fun, enthusiastic people to work at the Charmin Restrooms in Times Square, NYC this holiday season. Description and Qualifications: Greet and entertain bathroom guests. Then, blog about the experience. All candidates must really, really enjoy going to the bathroom." And I can't go on, sorry.

I don't know, maybe it would be healthier for us if we DID sit around the water cooler comparing anecdotes about the quality and duration of our poo-poo experiences, ideally at lunch time. Maybe we should have little contests (judged by a rotating panel of poo monitors) to see who uses the least and most squares, and even a fragrance tester to determine whose dump smells best and worst. Might have something to do with what you ate last night. The curry, perhaps? 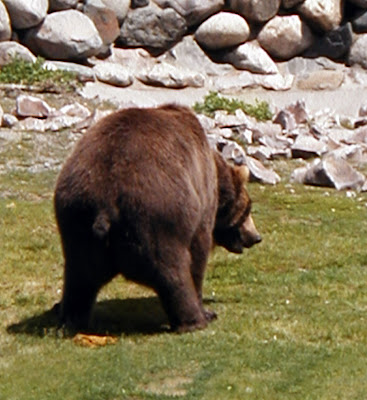 "Enjoy the Go"? Is Procter and Gamble's Campaign for Charmin a Bizarre Joke? (from BrandCulture Talk)

Every once in a great while we encounter a campaign so execrable it defies belief. Charmin's "Enjoy the go" fits the bill and causes us to question whether the marketing geniuses at Procter and Gamble have lost their minds.

The campaign rhetorically asserts, "We all go. Why not enjoy the go?" Can this possibly be the Charmin brand assertion? Indeed it is. The brand embraces a path as grammatically desultory as the campaign is incomprehensible.

Here at BrandCulture Talk (with a hat tip to David Aaker) we spend a good deal of time discussing rational, emotional and self-expressive brand benefits.  Brands that lay claim only to functional benefits are subject to being quickly eclipsed by competitive offerings. Only by laying claim to emotional and self-expressive value can brands create enduring competitive advantage. Except for a product like toilet tissue.

We suffer no illusions as to the job Charmin is designed to perform. By seeking to elevate excretion and dejection to a source of pleasure, however, the campaign is at best puzzlingly risible (albeit in poor taste) and more likely, seriously unhinged. Charmin endeavors to explain, "We all go to the bathroom every day . . . especially after morning coffee. Talk about getting things going! . . . Whew, that curry was hot [steam whistle sound effect]! Bottom line, we all spend a lot of time going." We do? 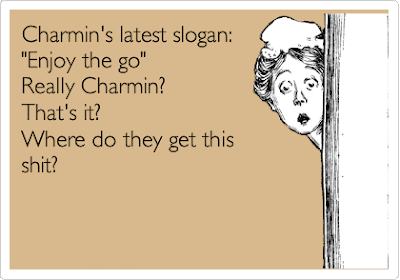 How a company that is arguably the world's preeminent marketer of consumer packaged goods created, and continues to support this campaign is a mystery.  P&G has extended the campaign into social media (recent Tweet to Charmin's nearly 8,000 Twitter followers: "Anyone have a favorite game they play while 'enjoying the go?' We enjoy a certain mad avian galactic battle one"), a Facebook presence with over 325,000 "likes" (!) (recent post: "Did anyone have Charmin on their Black Friday shopping list????") and a dedicated blog that descends from the simply gross to a creepily voyeuristic "Daily peek inside the cleanest public restroom in Times Square" (although they may have rethought that one as the last "daily peek" took place in 2009). This campaign is so bad for so many reasons that the writers of Saturday Night Live would be hard-pressed to invent this madness as a parody.

And just to make this whole campaign a wee bit classier, let's add . . . Kim Kardashian a couple of "Enjoy the go" bear mascots, a Brooklyn drum corps and a ceremonial glass key to the toilet! See for yourself: 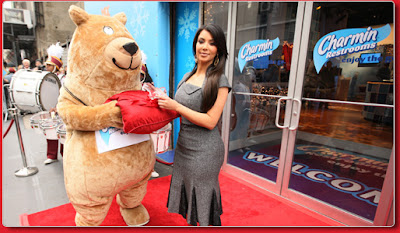 So . . . instead of furthering the devolution of the English language while mawkishly celebrating the unspeakable, wouldn't P&G be better served by dusting off an updated version of the venerable Mr. Whipple, who successfully hawked Charmin for over 20 years? Mr. Whipple cleverly extolled the functional (and actually valuable) benefit of softness through the inability for virtually anyone to resist the siren song of "squeezing the Charmin"? Like the iconic "Maytag Lonely Repairman," Mr. Whipple distinguished Charmin from competitive offerings with aplomb in more than 500 commercials, and was at one point the 3rd most recognizable American -- only behind Richard Nixon and Billy Graham. Not once did he feel compelled to mention enjoying the "go." The late Dick Wilson, the actor who portrayed Mr. Whipple, hit upon the crux of Charmin's dilemma in a 1985 interview with the Chicago Tribune: 'What are you going to say about toilet paper? I think we handle it the best way we can." If only  P and G took his advice. 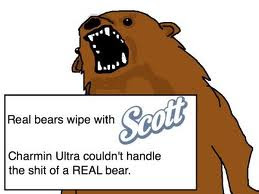 (An awful p. s., then I will truly stop. In what used to pass for morbid curiosity but is now seen as chirpy cheerleaderism, I decided to google terms which might be said to support the idea of "enjoy the go". What I came up with were terms for two psychiatric disorders: urophilia and coprophilia. This is the sort of stuff Dan Savage deals with in his ever-fascinating Savage Love column (not that I ever read it).

Sorry, folks, but this is what "enjoy the go" really means. Perhaps Proctor and Gamble had better do their homework more carefully next time.)