Holy Crappoly! Look what I found! (or: the Methigel Column)

Holy crappoly. Look what I found!

It appeared, or it must have, in the Tri-City News, the paper I wrote for for years and years and years. I remember it because I had to beg for my cheques. Then one day, after 15 years of service, they casually canned me for no reason they would state.

Them's the breaks. But here it is, this thing I found while trying to find my Google Author's Profile, which is right now having a nervous breakdown on Internet Explorer and flashing and jerking all over the place. I found it on some forum-or-other, and who knows where the person ever got it. It's almost like finding one of my columns from the (choke) Hinton Parklander!

The cat, whom I've written about before, is long since dead, though I was sentimental enough to make a scrapbook of his best photos, vet records and a lock of his fur (just kidding - I found enough of that on the furniture to not want to see it ever again).

To me, it looked like old beef gravy which had been allowed to harden
into a quivering semi-solid. To my cat ... well, when I unscrewed the
top of the tube, he took one sniff and ran the other way. 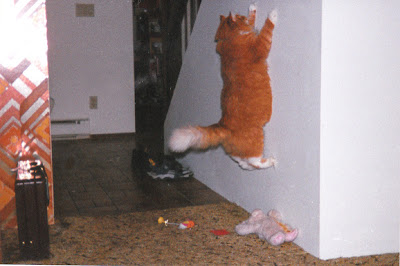 I don't blame kitty for his critical response. Cats loathe medicine,
especially the really noxious stuff. Murphy hates it, just as he hates
to admit that with the onset of middle age he has developed certain
urinary problems familiar to 50-year-old males everywhere.

There is a treatment: Methigel. But why are the manufacturers so
insensitive as to suggest that this stuff is equally "palatable" to
cats and dogs? That's like saying a medicine is suitable for guppies
and giraffes. Frogs and finches. Amoebae and antelope. 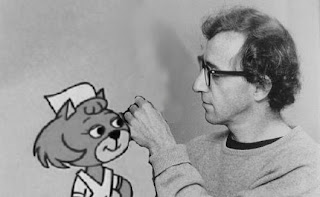 Everyone knows there is a world of psychic difference between a cat
and a dog. Just take a look at their owners.

Dog people wear thick Cowichan sweaters, smoke three-dot Brigham pipes
(even women), drink Dewar's White Label, read Hemingway, and sit by
the fire with their faithful pal at their feet. They like to be in
control - of their dogs.

Cat people wear claw-marked cashmere, gave up smoking years ago (Tabby
doesn't like it), drink whatever will get them there fastest, read
Dorothy Parker, and know enough to sit very still so Precious will
deign to jump up and snuggle. They love to be in control - but not of
their cats, who can bite and hiss and scratch and still be named
"Cuddlebug".

Murphy eyed me with mistrust. "I suppose you think I'm going to take
this greasy gunk without a fight," he stated as I prepared an oral
syringe full of the dreaded methigel. 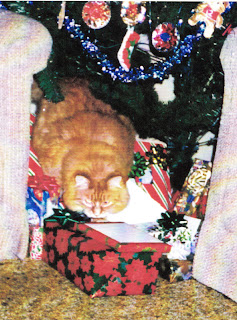 "No, but I do expect you to take it," I countered, grasping 16 pounds
of cat between my knees for the twice daily struggle.

"Good for cats and dogs? Bah -," Murphy spat, decorating the wall with
most of the dose. "A dog will eat coffee grounds."

He's right, you know. I've seen it. Dogs aren't fussy. In fact,
they'll lick up any old swill with the greatest of enthusiasm, then
sit up and beg for more.

I'm writing to the manufacturer of this medicine to suggest a change.
"Methigel for Cats?" No, let's call it Tuna Delight, a tasteful puree
of assorted fish-heads. 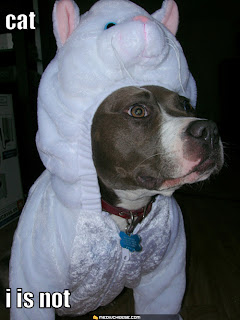 There will be a twist to the instructions. Before the owner is allowed
to administer the first dose, he or she must swallow a full
tablespoonful.

Good for cats. Humbling for humans.

Post-blog: Aren't you glad I took that Creative Writing course at Pinetree Elementary School in 1996? Since then, my prose has soared to new heights. Speaking of fish, this piece is suitable for wrapping it. But hey, I thought it was way good at the time!

Post-post: Just dredged up this bit of writerly nonsense. Showing off again, are we?

If a fish is the movement of water embodied, given shape, then cat is a diagram and pattern of subtle air.”
- Doris Lessing