"Hockey is back"? Give me a break!

Sports Now
SPORTS NEWS FROM LOS ANGELES AND BEYOND

A marathon negotiating session produces a deal that will end the 113-day-old lockout.


From the Associated Press

NEW YORK—
Hockey is back, and it took nearly four months and one long night to get the game back on the ice.

With the season on the line, the NHL and the players' association agreed on a tentative pact to end a 113-day lockout and save what was left of a fractured schedule.

Commissioner Gary Bettman and union executive director Donald Fehr ceased being adversaries and announced the deal while standing side by side near a wall toward the back of the negotiating room and showing a tinge of weariness.

"I want to thank Don Fehr," Bettman said. "We went through a tough period, but it's good to be at this point."

A marathon negotiating session that lasted more than 16 hours, stretching from Saturday afternoon until just before dawn Sunday, produced a 10-year deal.

"We've got to dot a lot of Is and cross a lot of Ts," Bettman said. "There's still a lot of work to be done, but the basic details of the agreement have been agreed upon."

Even players who turned into negotiators showed the strain of the long, difficult process.

"It was a battle," said Winnipeg Jets defenseman Ron Hainsey, a key member of the union's bargaining team. "Gary said a month ago it was a tough negotiation. That's what it was.

"Players obviously would rather not have been here, but our focus now is to give the fans whatever it is — 48 games, 50 games — the most exciting season we can. The mood has been nervous for a while. You want to be playing. You want to be done with this."

The collective bargaining agreement must be ratified by a majority of the league's 30 owners and the union's membership of approximately 740 players.

"Hopefully within a very few days the fans can get back to watching people who are skating, not the two of us," Fehr said.

All schedule issues, including the length of the season, still need to be worked out. The NHL has models for 50- and 48-game seasons.

The original estimate was regular-season games could begin about eight days after a deal was reached. It is believed that all games will be played within the two respective conferences, but that also hasn't been decided.

The players have been locked out since Sept. 16, the day after the previous agreement expired. That deal came after an extended lockout that wiped out the entire 2004-05 season.

"Any process like this is difficult. It can be long," Fehr said.

Time was clearly a factor, with the sides facing a deadline of Thursday or Friday to reach a deal that would allow for a 48-game season to start a week later. Bettman had said the league could not allow a season of fewer than 48 games per team.

All games through Jan. 14, along with the All-Star game and the New Year's Day Winter Classic had already been canceled, claiming more than 50 percent of the original schedule.

Without an agreement, the NHL faced the embarrassment of losing two seasons due to a labor dispute, something that has never happened in another North American sports league. The 2004-05 season was lost while the sides negotiated hockey's first salary cap.

Under the new CBA, free-agent contracts will have a maximum length of seven years, but clubs can go to eight years to re-sign their own players. Each side can opt out of the deal after eight years.
(Emphasis mine.)
Do you really think I believe all this shit? WHY do they announce the end of this dragged-out debacle to the public over and over again, only to suck it back and cause even more heartbreak?
Those who follow this blog (all two of you) will be aware, maybe, that I'm not much of a sports fan. But I have a compelling reason to hope the above hot air is really true: my son-in-law Jeff Paterson is a sportscaster who relies on hockey for the lion's share of his work. 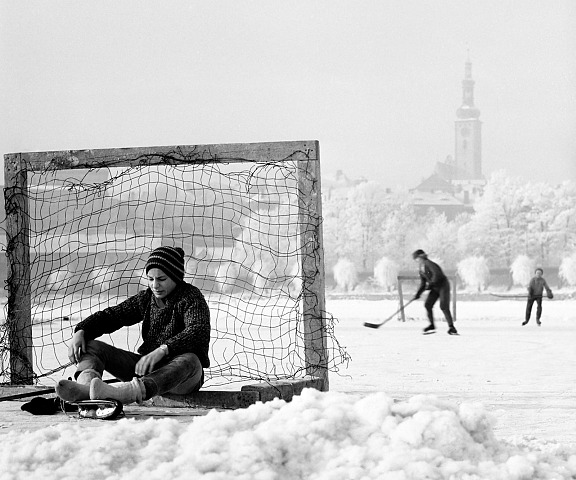 In other words, it matters.
But we've been here before. I remember sitting there drinking my post-dinner coffee while the good people at CTV told me the lockout had ended. No, they didn't quite say that. They said that it LOOKED LIKE the lockout COULD end soon, "good news for hockey fans everywhere!" There is a reason I'm such a pessimist, and a reason why I have a dread of chicken-counting. It almost never works out. The media sieze on something half-baked, and then the announcement explodes upon the public that this whole mess has been solved. Hurray! Make way for the Second Coming!
I won't even get into the unforgiveable fracas generated by this unnecessary and protracted wrangle. I'm just sick of chirpy little announcements that "Hockey is Back!", when there is still such a hair-raising amount of work that needs to be done before any of this is really settled. All it will take is the flick of one domino, and there are plenty of them still standing but quivering and ready to tumble.

(I'm not in the best mood now because I have come to the conclusion I can't use Internet Explorer any more if I am to post photos here. I am going to give it a few more days - why, I don't know, because no one at Google seems to give a royal shit about a few peons like us. I've had luck with Firefox before in untangling problems with my Google author's profile (in which I could not post photos at all - they were sort of glued together). I just tried to go on that page and it seems to be having a nervous breakdown, flickering rapidly back and forth between two BLANK screens, as if it had lost all my information. In the meantime I've found a very limited, laborious way to put up images here, but it's a total pain in the ass: you can't change the size of photos, and line-spacing needs constant correction, if you can do it at all.) 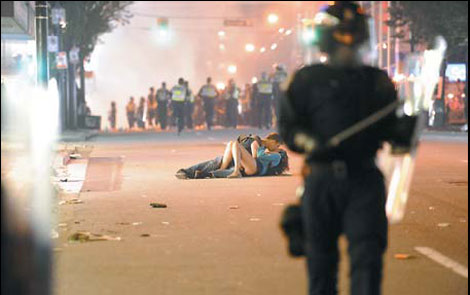 God, guys, don't DO this to us! This family has more invested in
hockey than most. My husband, a worse pessimist even than me, came up the stairs this morning telling me, "It looks like Jeff will be going back to work," and my first word was, "Really?" Then I saw that awful, awful word "tentative" and read down further into the article and realized we're probably doomed.
Hey, surprise me! Go ahead, I'd like it. But there are still way too many hoops to jump through, and at any point the whole thing could come crashing down. So why announce to the public that it's all sorted out?

Well, that ISN'T what they said. They said "tentative", but the public won't see that. Dazed by "Smart"-phones and other brain-replacing devices, they are devoid of any form of discernment and gulp down news headlines like so many lattes, conveniently ignoring little meaningless words like "tentative".
TENTATIVE MEANS IT'S NOT SOLVED. Wake up, assholes! NOTHING is solved until every party involved with this mess has signed on the dotted line. Do you know what that's called? It's called a legally binding agreement, a CONTRACT! Would you go around telling everyone you're married, that you have contract work, that you - never mind.

Posted by Margaret Gunning at 10:07 AM No comments: