NOT a Child's Christmas in Wales: really bad Dylan Thomas 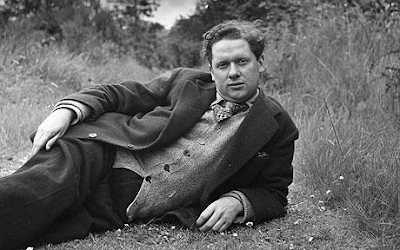 Not too many people know this, but I'll tell you right now: Dylan Thomas was a really bad writer. He crammed adjectives together in a way that made everyone gasp, "Ohhhhh!" and "Wheeeee," as if they were watching fireworks. But that's not good writing. That is what is referred to in literary terms as a "cheap trick".

He wrote about Wales as if it were the dark side of the moon, some exotic or even erotic place where the sea sang its siren song: but the truth is he hated Wales. Hated its narrow religion and suffocating parochialism and "the museum that should have been in a museum" (and I've seen a few of those). He must have hated where he came from, or he wouldn't have gone to America to read poetry to melting young girls and get so soused his head exploded. He had to have a shtick of some sort, a shtick that other writers hadn't quite thought about, a Yeats-ian, Joyce-ean thing, except not Irish. 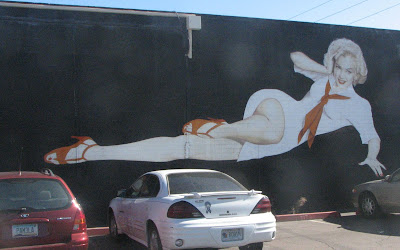 You HAVE to love Dylan Thomas. You HAVE to admire the solid blocks of poetry or the yammering sing-songy short stories. The only one I really liked was about the guy in the bar, soused, who meets the love of his life, goes to the men's room and never finds his way back. Ever. Reminds me a bit of This is Spinal Tap and how they can't find the stage. You can't say you hate Dylan Thomas and hold your head up in literary circles. Oh, but look at this image! Oh, but look how he does this, how he does that. Though there are some interesting images in And Death Shall Have No Dominion, it seems to have been written for Richard Burton (soused) to read on the Ed Sullivan Show, which in fact I think he did. 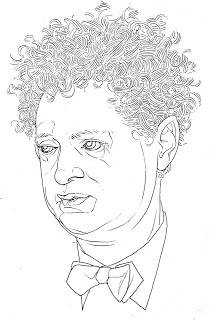 Reading A Child's Christmas in Wales used to be de rigueur in classrooms and around the fireplace on Christmas Eve. Today it all feels dated somehow, dense Christmas pudding or a fruitcake passed back and forth in the family until it turns into the sort of igneous rock that was used to build the ancient Pyramids.
This is only a small fragment of one of Thomas' more interminable short stories, called Quite Early one Morning. It was written to pad out the selections on a Caedmon recording he did in the '40s - I know because I have a copy of it rattling around somewhere. Dylan Thomas was famous for his "Welsh-singing" voice and his magnificent readings. OK, if you like Richard Burton with a headcold and a hangover. There is a definite wobble. And then there was the mess of his personal life, which I will not get into.

This story (the fragment I have shared here: it's about a zillion pages long and I thought you'd get bored) is precious and atrocious at the same time. Pretrocious? It's cute. Those little Welsh people in the town, goddamn! they were funny to write about. It drips with the sort of entitlement that announces to the world, "I have arrived. And you have not." It may or may not be a forerunner of Under Milk Wood: Under Skim Milk Wood, perhaps.
I used to love A Child's Christmas in Wales until I actually read it and saw all sorts of cheap verbal tricks going on. If you really want a good Christmas story, make like Linus in the Peanuts story, hit the lights and open the gospel of Luke. In the meantime, this ISN'T from A Child's Christmas in Wales, so it can't be all bad. 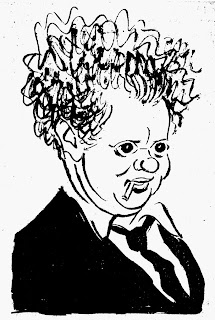 I walked on to the cliff path again, the town behind and below waking up now so very slowly; I stopped and turned and looked. Smoke from one chimney - the cobbler's, I thought, but from that distance it may have been the chimney of the retired male nurse who had come to live in Wales after many years' successful wrestling with the mad rich of Southern England. (He was not liked. He measured you for a strait-jacket carefully with his eye; he saw you bounce from rubber walls like a sorbo ball. No behaviour surprised him. Many people of the town found it hard to resist leering at him suddenly around the corner, or convulsively dancing, or pointing with laughter and devilish good humour at invisible dog-fights merely to prove to him that they were normal.)

Smoke from another chimney now. They were burning their last night's dreams. Up from a chimney came a long-haired wraith like an old politician. Someone had been dreaming of the Liberal Party. But no, the smoky figure wove, attenuated, into a refined and precise grey comma. Someone had been dreaming of reading Charles Morgan. Oh! the town was waking now and I heard distinctly, insistent over the slow-speaking sea, the voices of the town blown up to me. And some of the voices said:

I am Miss May Hughes 'The Cosy', a lonely lady,
Waiting in her house by the nasty sea,
Waiting for her husband and pretty baby
To come home at last from wherever they may be.

I am Captain Tiny Evans, my ship was the 'Kidwelly'
And Mrs Tiny Evans has been dead for many a year.
'Poor Captain Tiny all alone', the neighbours whisper,
But I like it all alone, and I hated her.

Clara Tawe Jenkins, 'Madam' they call me,
An old contralto with her dressing-gown on,
And I sit at the window and I sing to the sea,
For the sea does not notice that my voice has gone. 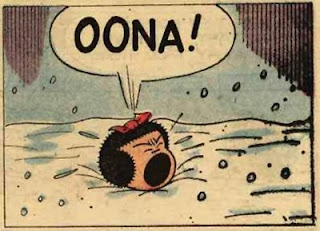 Parchedig Thomas Evans making morning tea,
Very weak tea, too, you mustn't waste a leaf,
Every morning making tea in my house by the sea
I am troubled by one thing only, and that, belief.

Open the curtains, light the fire, what are servants for?
I am Mrs Ogmore-Pritchard and I want another snooze.
Dust the china, feed the canary, sweep the drawing-room door;
And before you let the sun in, mind he wipes his shoes.

I am only Mr Griffiths, very short-sighted, B.A., Aber.
As soon as I finish my egg I must shuffle off to school.
O patron saint of teachers, teach me to keep order,
And forget those words on the blackboard - 'Griffiths Bat is a fool.'

Do you hear that whistling?- It's me, I am Phoebe,
The maid at the King's Head, and I am whistling like a bird.
Someone spilt a tin of pepper in the tea.
There's twenty for breakfast and I'm not going to say a word.

I can see the Atlantic from my bed where I always lie,
Night and day, night and day, eating my bread and slops.
The quiet cripple staring at the sea and the sky.
I shall lie here till the sky goes out and the sea stops.

Thus some of the voices of a cliff-perched town at the far end of Wales moved out of sleep and darkness into the new-born, ancient and ageless morning, moved and were lost. 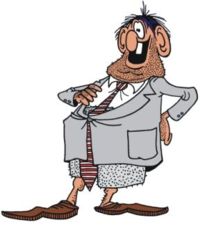