EWWWWW, look at his face! (or, Polka for Oskar Homolka)


Not quite Halloween yet, but I just can't wait. This is one of my fave movie moments. It's in one of those cheapie William Castle horror films, in which he comes on-screen at the beginning and rhapsodizes about his own movie and how petrifying it is. Supposedly the audience was allowed to vote on the ending, thumbs-up or thumbs-down, deciding the fate of poor Mr. Lockjaw. Only one ending was filmed, so this was obviously just a typical Castle piece of theatre. 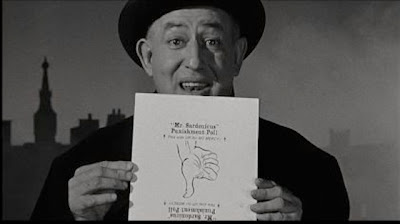 I shouldn't give it all away, but the essence of this macabre little tale is that Mr. Sardonicus unearths his father's rotting corpse to steal a winning lottery ticket out of his moth-eaten old pocket. The horror of seeing his father grinning away like Lon Chaney in Phantom of the Opera causes him to develop a hideous, intractible facial paralysis. In fact he personifies that old Wet Willie classic,  Keep On Smilin':

At least they got that insane part right.

William Castle is notorious for sensational special effects, not in his movies but in the theatres in which they were shown.  In fact, he was known to wire  some of the seats  (though not every seat, so the electrocuted people would think they were going crazy). I don't think he invented Smell-O-Rama however. Mr. Sardonicus is plain creepy and I remember watching it late at night in the '60s with my brother. Good thing he was there. When Mr. S's deathly grimace was finally revealed, I remember we both went "ohhhhhhh" in a groaning kind of way, then laughed ourselves silly. Later Arthur referred to Mr. S. and his "winning smile". 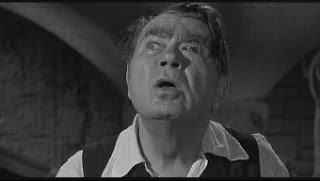 I posted this one at least once before, but hey, it's worth a repeat at this festive time of year. Halloween is a huge business now (what with all the vampire/zombie/other supernaturally-themed movies that are popular as never before), though when my kids were young there were all sorts of solemn newspaper editorials that predicted Halloween would soon be phased out for being too old-fashioned and too dangerous (razor blades in apples, etc., which turned out to be an urban myth). I think everyone assumed it was true. What a weird custom anyway, putting on costumes and running all over the neighborhood in the dark. When you think about it, which no one does because people generally don't think, it's a big waste of time for a bagful of neon Gummi Worms.

But it's one of the few remnants we have left of ancient rituals in which people scare the giblets out of each other. Why not bring back human sacrifice while we're at it? But then you don't get candy. 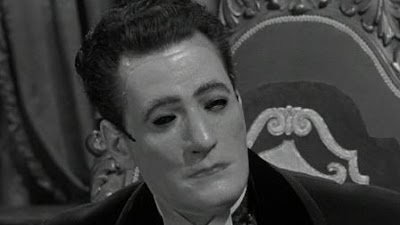 This is one of those rare YouTube videos which is actually in the public domain and therefore can be watched whole. I've posted the link below. I don't know how they do this exactly, because everyone says YouTube has a 10-minute bandwidth limit or something. Maybe time stretches to include this bizarre little tale.

Oh, and - as Krull, the sinister squint-eyed "assistant", we have the incomparable Oskar Homolka. A scarier man never existed on film. I promised I'd never mention Oscar Levant again, but I lied: I'm still making my way through the labyrinthine ways of his bizarre mind (speaking of horror) in his bio A Talent for Genius.  Levant was a gifted composer with a penchant for whimsy who wrote a piece called Overture 1912, a. k. a. Polka for Oskar Homolka.

Not everyone has a polka named after him. In fact, I can't think of anyone else. 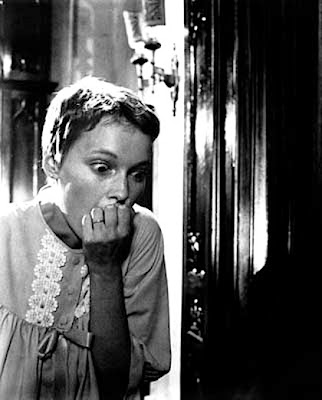 (A big P. S.! I just found out, while digging around for info about Mr. Sardonicus, that William Castle was - incredibly - the producer behind Rosemary's Baby, another viscerally creepy classic. About a year ago I tried to find trailers, clips, ANYTHING about the movie on YouTube and came up completely empty. It squicked me out because after the one time I saw it in about 1970, it never came on TV again. I mean never, because I am sure with my relentless bloodhound's nose I would have sniffed it out. It's simply never shown, and I don't know why. I also don't know why the one time it was on TV was so close to the release date.

But there it was, gone.

I finally had to scare up a used DVD. One of the great horror classics of all time wasn't in print any more. I watched it and had that same gut-squirming feeling I remembered from 1970, which did not become full-blown until "the reveal" - another genuinely terrifying moment in horror movies - which is not a reveal at all, but a reaction. Mia Farrow does it all with her face.

I've never seen anything like it, before or since, and though there are now a few YouTube tidbits from the movie, I can't find this scene. When your sweet little newborn baby turns out to be the spawn of Satan, it's apparently just a little but upsetting. The whole disappearance thing is just weird. Castle, the P. T. Barnum of horror, kept claiming there was a Rosemary's Baby curse, that everyone connected with the film dropped dead or something (not true, although Mia had that thing with Woody and John Cassavetes became a falling-down drunk).

But why hasn't it been on TV, and why can't I find anything else on it? Rights or something? It's the inverse of sex: everybody talks about it but nobody has it.


https://www.youtube.com/watch?NR=1&v=6QLZoV40Ez0&feature=endscreen
Posted by Margaret Gunning at 9:31 AM 2 comments: