I swear, this isn't as incoherent as it seems. It all ties in with the grand show of vintage cars I took in on Sunday, my favorites being those immense, bulbous tanks from the 1940s. There was something imposing - almost disturbing - about these things, a great upthrusting nose like the prow of a ship, giant (bosomy?) swellings at the front and a falling-off at the back so extreme that in some cases the rear tires were completely invisible. How these things navigated road-bumps without severe damage is beyond me.

I remembered this Popeye cartoon, one of the good old vintage ones from the '40s (which means, of course, that it has a mililtary flavor to it). The car in it is a splendid example of the 1940s tank. Most of all I remembered that exploding tire scene, was almost traumatized by it as a child, and now I see why. It seems to build and build, expand and expand until you know what's coming, a sort of screen-filling red-drenched orgasm that blows all the main characters into next Thursday. They blast through several billboards before colliding with a clothesline, leaving them all clad in someone else's underwear (Bluto in a frilly corset), adding to the bizarre erotic effect.

Sex in cartoons? Are you kidding? Not that Popeye squeezing his spinach-can until it spurted into his mouth had any sort of Freudian significance at all.

It was nice to find this dear old thing - strictly through a Google search, I never would have tracked it down any other way - because I've been obsessed with those bulbous, surreal '40s vehicles lately, particularly the custom-made ones that pushed all those features to a fetish-y extreme. 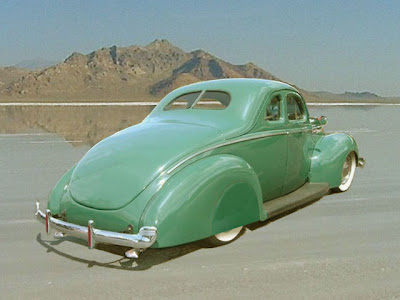 The kids could slide down this one, except their short pants might get caught on that pointy rear bumper. It's hard to see the rear tires, though they do just peep through seductively. A little trap-door thingie over the rear tire is also just visible. Else how'd you ever change the thing? 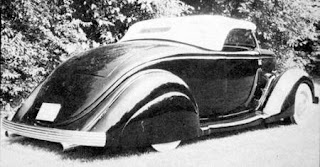 A lot of these extreme cars were custom-made by a guy named Westergard. I think I caught a glimpse of one of those cars once, and it was breathtaking, but didn't quite look real.

This is some sort of convertible, I guess, but I'd be too scared to get in it. It just looks intimidating. 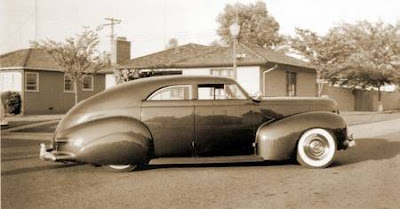 Now we get to it. This car has a FAT ASS. It has haunches on it that are as cobby and waddly as a hamster's. It looks overweight. It looks like it has big overstuffed seed-pouches both fore and aft: a hamster squared! 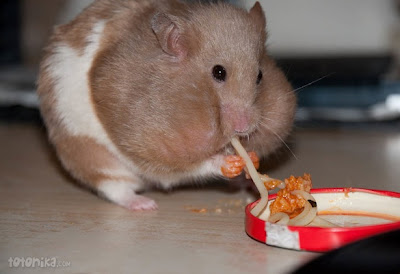 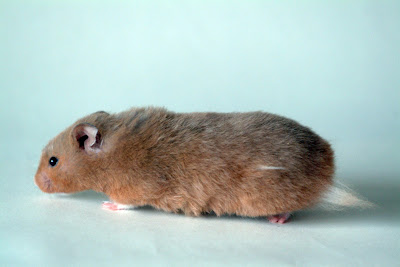 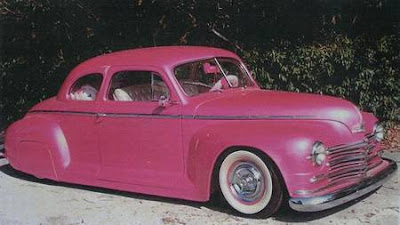 Does this thing even HAVE rear tires? Does it just sort of drag itself around, creating horrendous sparks behind it and making an awful screeching noise? It seems to sit level on the ground, belly down, kind of like a. . . 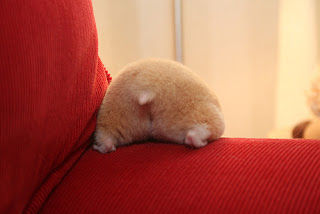 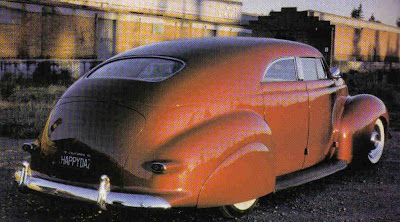 Would you call this a station wagon that's been left out in the sun too long? A pregnant trailer? What the fxx IS it? Like Popeye's tire, it looks as if it's about to explode from internal pressure.

Then again, maybe it's just a hamster on wheels. 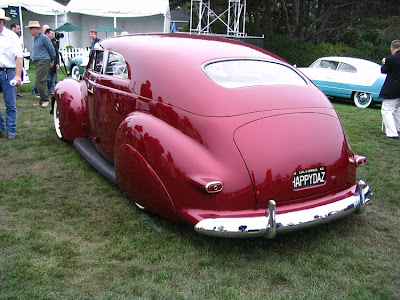 Cars were more animal-like then, but this one seems so hunkered-down, so crouched. It would have to scuttle around on its belly like a badger. And the squinty little eyes on it: disturbing. It must have run, or no one would have gone to the trouble to have this Westergard guy build it for them. But it just looks so wide. How did you navigate turns in it? How could you see out of these tiny little window-slits? How much gas would it guzzle in a day?

I don't particularly trust hamsters at the wheel, but some of their antics are kind of amusing. 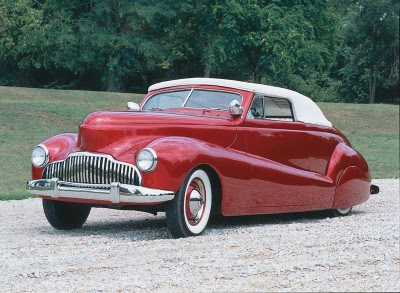 But just look at this majestic thing, jeez, it almost has a face on it, with a fierce toothy frown and great upjutting phallic nose. It's a straight-ahead sort of thing, a get-out-of-my-way car. Come to think of it, it seems like something from another planet. But breathtaking nonetheless. 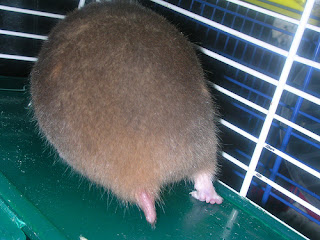 Any resemblance to a hamster's ass is purely coincidental.

Posted by Margaret Gunning at 3:26 PM No comments: