Me-OW! Me-ow, me-OW! Chow-chow-chow, meow-meow-meow-meow, and all that stuff.  Well, at least it's not a dog parade. There's something about a bunch of wiggly chorus girls from the '30s pretending to be kitties in fur costumes. It's just. . . surreal. Ruby Keeler in particular is a strange one: not pretty (at all), not charismatic, an atrocious actress and singer, and only a so-so dancer. Must've banged the boss or something.

I watched most of this movie (Footlight Parade) while in a glazed state (just plain tired). It sort of slunk by me in a surreal haze, and I kept on watching it cuz it had James Cagney in it and I've always found him interesting, if a bit frightening. Now HE had all the things Keeler lacked, and was a fair dancer in an odd, stiff-legged way when he played George M. Cohan. He was even prettier than she was, with those heavy-lidded, bedroomy eyes that promised a good slapping around. Then again, pickled herring would be prettier than she was. 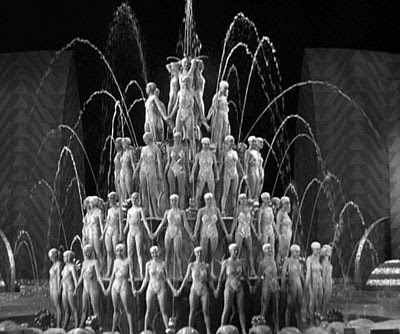 This movie was astonishing in that it had multiple Busby Berkeley numbers staged in such venues as giant swimming pools, a Shanghai brothel and an entire hotel full of couples trying to conceive babies. These numbers were all performed live at movie theatres - in fact, the whole entourage had to rush from one theatre to another - to warm up the audience as an opening act for the film.

That meant they had to pack up 57 floors of a hotel in the back of a truck, drag an Olympic-size pool with water in it around with them and scrape together a brothel  as they zazzed from movie theatre to movie theatre, maybe collaring a couple of extra chippies along the way. Nobody asked how they fit all that stuff on a stage that wasn't even that big cuz it wasn't meant for live shows. Not THIS kind of live show anyway. All that water would've warped the floor boards. 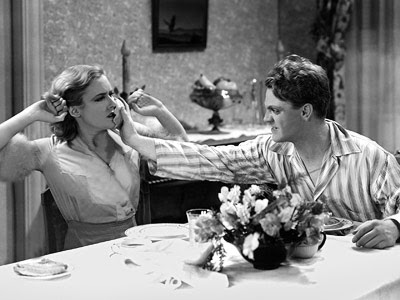 This whole thing was coy and jiggly and obviously pre-Code with its references to prostitution, extramarital sex and various kinds of hoochy-koochy. The costumes were brief and filmy and nipples figured large. Within a year the iron gates would have clanged shut on all that bloody sex nonsense. Tarzan still wore his loincloth, but Jane was clad in something like a gym suit and kept referring to T. as her "husband". (So who married them - Cheetah?). 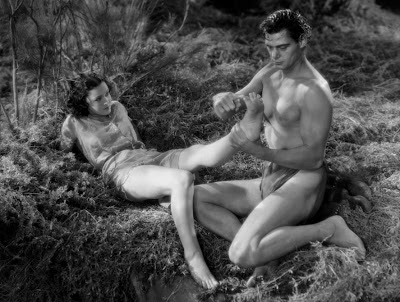 Jane is (supposedly) about to go back to England to sort out her inheritance, so is saying goodbye to Tarzan (reassuring him that she will be back "when the moon makes safari three times"). She's sitting on the ground and he suddenly looms up in front of her. Weismuller couldn't act his way out of a paper bag full of bananas, but physical presence he had, and a sinuous leopardlike jungle tread that was compelling and even a bit disturbing to watch.

Anyway, he gives her what looks like a gardenia. Then she begins to lie back with a look on her face that's complex - it's almost fear, but also anticipation and awe - and a big shadow falls over her and then the camera pans to the river beside her. As her hand slowly opens the gardenia drops into the water and rushes away.