Les Meows: Victor Hugo in the trash can

Oh my GOD, I am too tired to write about Top Cat right now, but I have to get this down before I collapse! Since I started watching this show again on the Classic Toons channel, my whole life has changed. And as elegant as these opening and closing credits are - some of the neatest, most sophisticated animation I've ever seen, giving the lie to the belief that Hanna-Barbera only turned out schlock - the real discovery, or rediscovery,is a certain character: the one I used to call "The Pink Cat", my favorite Top Cat gang member when I first saw the show. When I was seven.

Which I was. Seven. And the cat was. Pink. I doubt if I knew his name then, as I was trying to keep the names of the whole gang straight and there were SIX of them which was just about one cat too many.

Another very odd thing about the show was the way they mixed cats with humans: a cat could be in a human hospital with a cat nurse, and the nurse could be engaged to a doctor who was actually a human. A cat could be a torch-singer in a night club that human males had the hots for.  It was all extremely weird and anthropo - anthropo - excuse me while I spit this word out.

I do remember Arnold Stang, T.C.'s voice, from other things, including commercials for a chocolate bar called Chunky. Stang died only a couple of years ago at age 90, so doing T. C. must've been lucky for him. They only made 30 episodes of this gem, maybe because these were alley cats and part of an actual gang of no-goods who went around cheating and stealing and breaking the law. Not a very nice example for the kiddies. 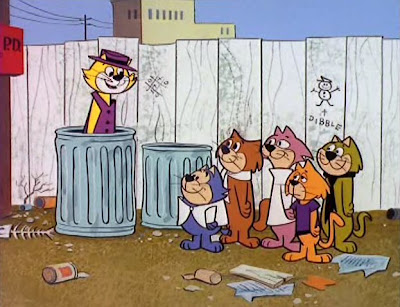 But I digress. I digress because I'm so tired my head will soon roll off my shoulders and bounce down the stairs like a bowling ball. I have to just get this in before I fade out for the day: now I've found out more about The Pink Cat! His name is Choo-Choo and he is THE coolest of the gang, wearing a white turtleneck (which was very beat back in 1961) and speaking in a Brooklyn-accented voice which Wikipedia tells me was supposed to resemble Woody Allen's.

Did someone mention Woody Allen? Did anyone know who the hell he was back then? Had he even made a movie? So unless you lived in some esoteric part of New York and went to coffee houses, how would you ever be exposed to him? Jesus. Hanna-Barbera was incredibly progressive. 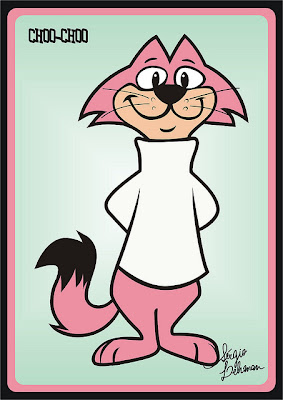 The thing is, this was 1961 and I was seven. And then there was this pink cat. Then my brother got home from band practice. Then I went to bed. 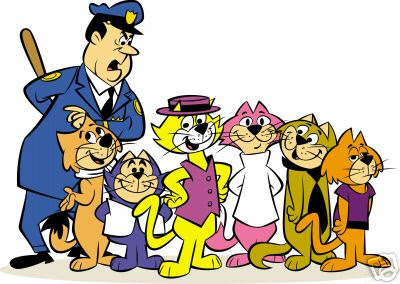 As it turns out, yes, yes, I DO have more to say about Top Cat. It came on late enough at night that I watched it through a drowsy haze. I liked it, but it was Different. It wasn't simple like The Flintstones or dumb like Ruff and Reddy or ridiculous like Underdog or Superchicken.

Top Cat was originally meant to be a sort of cartoon version of The Phil Silvers Show, which ran some time in the late '50s and which scared the bejeezus out of me because at the start of the show, there was this cartoon guy yelling out this incoherent gibberish. Took me years to figure out it was an army guy barking orders. I was about four, so my confusion was understandable. But who gave a shit about Phil Silvers anyway? He has been completely forgotten, and for some reason his name reminds me of an empty can of cheap salmon rattling around in a garbage can. He has all the historic importance of Arthur Godfrey's discarded fingernail parings.

But back to Top Cat.

In my last rather pathetic entry, posted in a twilight state, I neglected to mention that besides his Gang of Five (and no, I'm not going to give you their idiot names because it doesn't matter: they're something like Brain, Stupid, Fleas, Burlap Sack, and Twinkie), this show had an undercurrent of Victor Hugo that was completely missed by audiences and critics alike (not to mention Nielson ratings, which were always poor).

Top Cat was a rapscallion and a scalawag and a scofflaw and all those other things good alley cats aspire to be: but he was also hunted, chased from one end of the City of New York to the other by a menacing figure. 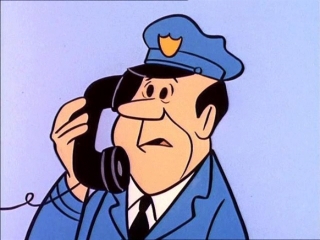 Behold: the Inspector Javert of the alley!

Witless as he was, this guy had such an effect on world culture in the thirty short weeks of his cartoon life that in some parts of Australia and New Zealand, "dibble" still means "the fuzz".

As a kid I used to call him Dribble, or even Drivel sometimes, as he could be incredibly stupid. But that's not the point. Our wily Jean Valjean of the alley needed an adversary, something to push against. Otherwise there'd just be no story.

As I watch these cartoons again fifty years later (oh God, it's even more than that), they look different. I now realize "the Pink Cat" couldn't have been my name for Choo-Choo because he was grey, just like all the other cartoon characters, just like Mickey Mouse, Donald Duck, Deputy Dawg, Tennessee Tuxedo, Wally Gator, Magilla Gorilla,  Twinkles the Elephant, Lippy the Lion and Hardy-Har-Har, and all the rest of them. 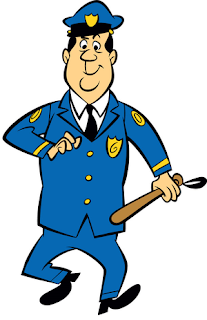 Now the colors look deeply saturated and incredibly vibrant, as if I've stepped over the threshhold and into the land of Oz. Those colors were there all the time, of course, but hidden beneath the veil of early '60s drabness. The veil peeled back, these cartoons are incredibly enjoyable to watch again, though I am not sure why.

Maybe it's their sweet pointlessness. Hanna-Barbera, clever as they could be, were not Victor Hugo, after all. But there are  still moments that cause a little frisson of shock.

Top Cat is very New York, more New York than Woody Allen (and I've already explained how Choo-Choo, my fave character, was meant to be a Woody Allen impersonation, though frankly I like Marvin Kaplan's voice characterization better -  a little more adenoidal but friendlier, not so whiny). Its New Yorkness, if ever so simplified, is crucial to every plot line.

But at the beginning of more than one episode, there's an opening shot sweeping the ramshackle skyline of T. C.'s glorious domain, accompanied by a raffish bluesy upslide on the clarinet which is strongly evocative of the first few bars of Rhapsody in Blue.

Holy God! Is THAT where that famous opening shot in Manhattan came from? Did Woody Allen really think he was being original?