Animal hybrids: monsters in the making

I want to write more about this whole mess later, when I get a chance to see a documentary called The Elephant in the Living Room. I saw the last half of it on National Geographic Channel and spent the half-hour with my mouth open. 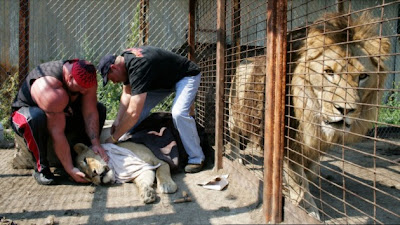 The cases in this documentary weren't the worst, but they were bad enough. Keeping exotic animals as pets often goes completely unregulated, sometimes with disastrous results. It wasn't just the utter degradation of seeing glorious jungle animals kept in wire cages (with one male lion slowly, agonizingly electrocuted by faulty wiring on a freezer): it was the emotional abyss at the core of the people who were keeping these "babies". "He's like my son," claimed the lion's owner before the disaster,"one of my kids." Why is it I have this feeling his real children never tapped his heart in the same profound way? 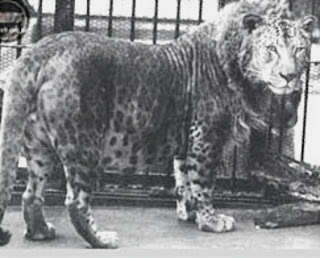 All that unfathomable sickness aside, I soon got on to the topic of animal hybrids and was pretty astonished at what I found. Astonished, and freaked out. There has been an awful lot of tampering going on behind our backs: I didn't realize the well-known liger is three times the size of a normal lion, weighing close to a thousand pounds and resembling some prehistoric beast on an unimagineable scale. All this has been engineered, folks - we made it happen - and we made it happen without the slightest knowledge or concern that the resultant creature would be so grotesquely proportioned.

From the liger and the smaller tigon, often afflicted by dwarfism (not that such an insignificant thing will stop them from being bred), I fell into the dusky world of the wolf dog, which some people own for the same reason they'd get their bodies tattoed over every square inch: look, I'm a social rebel, I own a dog that's half-wolf! Look, I take a huge risk every time I take him out of the wire cage! 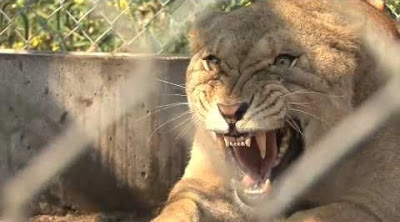 Does anyone stop to think what is going on in the mind and biology of an animal that has been created from spare parts, cobbled together in God-knows-what sort of way just on a human whim? Might there be some sort of internal conflict at the most fundamental level? Might that animal not know who he/she is? Or are those kinds of concerns not on the table, so long as we satisfy our "let's try this and see what happens" impulse?

Oh, but it got worse, a lot worse! Zebroids, including a zorse, a zonkey, and a zony. A cama, fusing together two species that are, well, close enough, aren't they? Except the llama genes seem to cancel out the camel's hump. But who needs a hump anyway? 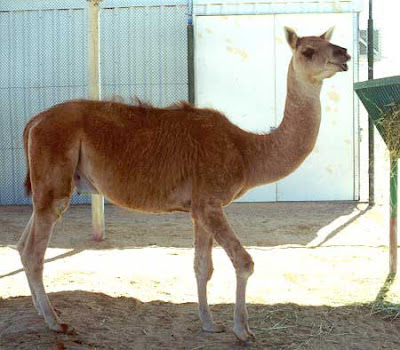 When I came to the grolar or pizzly, I began to feel sick outright. But bears are bears, aren't they? Does it even matter if they're brown or white? Then why do I feel so nauseated? Never mind that these grotesque and ridiculous names insult their animal dignity and wouldn't even suit a toy. Hey, the leopon is just a spotty lion, right? And the wolphin. . . 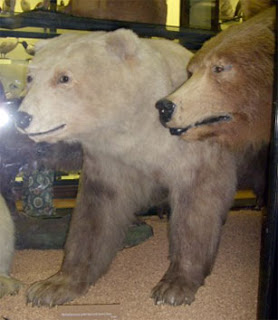 
What set all this off - I mean, after the National Geographic documentary, which I have ordered on a DVD - was stumbling upon something that nearly made my hair stand on end: the humanzee. I didn't like to think that it was possible, that we've come that far, that we might just want to try this out for a lark or out of scientific curiosity: but haven't we been told over and over again how genetically close we are to chimps? 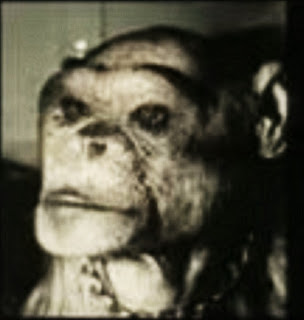 This is a weird story that has been officially discounted, and now that I look at it a little more objectively I can see why. A couple claimed to have captured a baby chimp "in the wild" in 1960. Oliver had some pretty strange traits, the strangest being walking upright without the weird staggering gait of most chimps. He also had a strange-looking face, hairless and sort of flat, though hardly human. His ears creeped me out however, as they didn't look like chimp ears at all. They looked like human ears that had been grafted on. 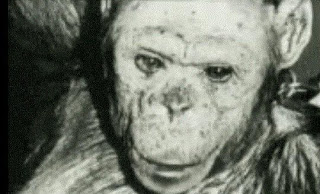 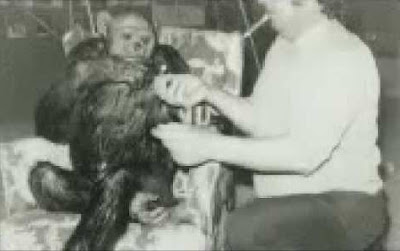 Other chimps shunned Oliver, who seemed to prefer human company (and even mounted his owner's wife, causing them to eventually sell him). He smelled different, not like a normal chimp. These were all little question marks that added up to a very big one: did Oliver have human genes, and if so, how had this happened?

Back in 1960, the assumption was that some man had had sex with a female chimp "in the wild", the chimp had become pregnant, and little upright-walking, flat-faced Oliver was the result. He quickly became a sensation, dressed up in a tux and encouraged to smoke and drink for the crowd. This reflected the hilarity of the times upon witnessing animals "acting like humans". (Remember the Marquis Chimps on Ed Sullivan? I hope you don't.) 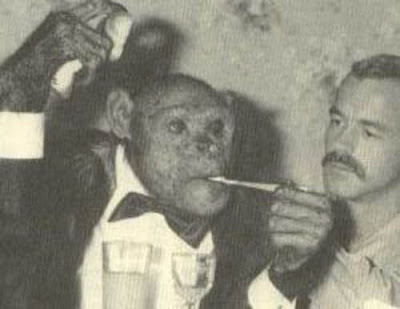 But a funny thing happened on the way to fame. People lost interest. The whole thing looked a little bogus. Oliver was sold again and again, each time falling a little deeper into the hole, and ending up in a small square wire cage in a laboratory.

Decades later, Oliver's original owner (perhaps wondering if there was more money to be made) tracked him down and eventually settled him into one of those chimp retirement homes. He didn't walk upright any more - too much trouble - and by this time he just looked like an old chimp, a very relieved old chimp, relieved he didn't have to wear a tux, smoke cigars and drink brandy for the crowd. He died only a couple of weeks ago, in fact, probably about 55 years old. Certainly he had served his time. 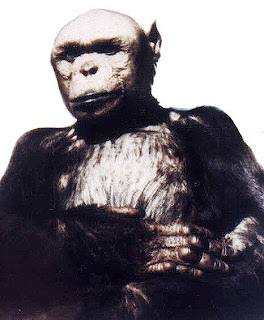 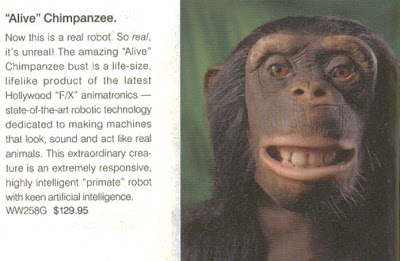 But it hangs in the air, doesn't it - weirdly, and sickeningly. Camas, pizzlys, zorses and wolphins. Why not humanzees? At the end of his life Oliver was genetically tested, and it was officially announced that he was "100% chimpanzee", so that was that. (If he hadn't been, what would they have said? The genie would be out of the bottle for sure.) 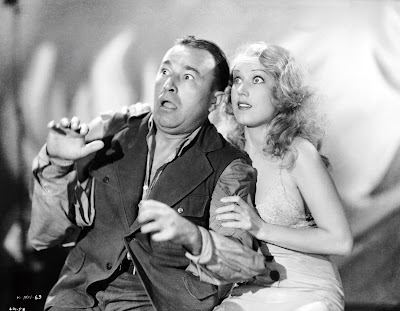 At the embryonic level, this has already been attempted and perhaps even accomplished. We want stem cells and new organs and all that sort of thing, necessary spare parts salvaged from throwaways, and we don't seem to care how much we ravage the natural balance in order to get them.

But an actual humanzee, a hybrid? Is it illegal? Would it be funded? Who cares. Money comes. It follows curiosity. I am beginning to get this sick feeling, this prickly feeling that we're going to see this, and sooner than we think. The trouble is, no one will know what to do with this wretched thing, this product of strands of DNA twisted horribly wrong:  kill it now? Watch it suffer, or, perhaps worse, thrive? 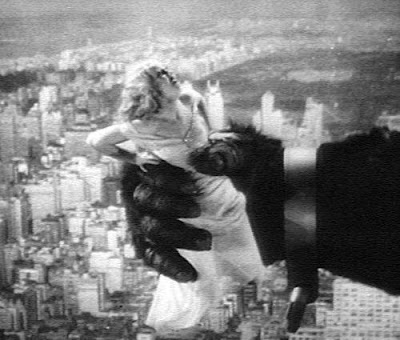 What will it look like? Can you see it in your mind? Will it maybe resemble its human parent: "Doesn't little Johnny look just like his Dad"? Will it walk upright like Oliver, or scooch around on its knuckles and swing from the trees?  Talk, perhaps? Have thoughts, opinions, needs? But who cares about needs at a time like this: who thinks of needs except OUR needs, our whims, our wretched inability to leave things alone and appreciate a fragile, unforgiveably damaged wild world that is committing suicide right in front of our eyes. 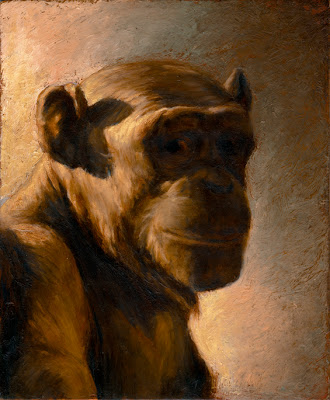 Posted by Margaret Gunning at 8:43 AM 21 comments: