The most romantic kiss in screen history! 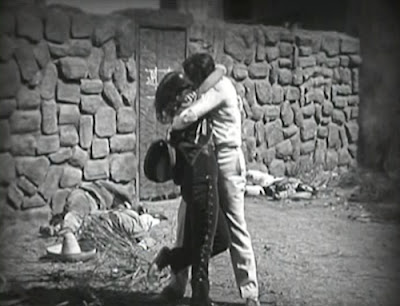 Having written a novel about his life, a novel which I hope will find wings in the year 2013, I feel like I know Harold Lloyd personally sometimes, and I certainly know the course of his career. He probably made a couple hundred movies all-told, starting in 1917, but his classic films came out in the early-to-mid '20s. In rating his best pictures, most silent film buffs would probably name The Freshman (which is about . . . a freshman, a nerdy overaged college boy desperate for popularity) and Safety Last, in which safety comes last as Harold climbs up the side of a dizzyingly-tall building and hangs off the hands of a huge clock. 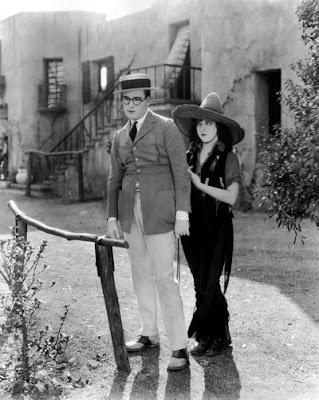 I like those, yes, love them in fact, and never tire of watching them (in fact I may watch them again tonight), but there is more pain and poignancy in The Kid Brother, and more still in Girl Shy, in which his characters are passive, even downtrodden youths who haven't yet discovered their manhood. This revelation/transformation always happens through love: Harold Lloyd's films are among the most romantic ever made, and none more romantic than my personal all-time favorite. . . 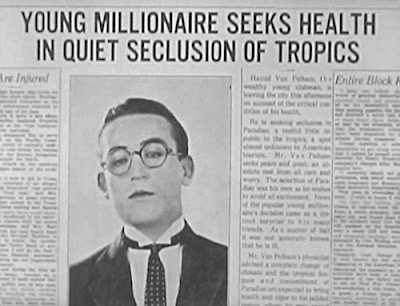 Against type, Harold plays a wealthy idler with all sorts of imagined ills who escapes to a tropical island with his gorgeous nurse (played by the sad-eyed, kewpie-lipped Jobyna Ralston). Said nurse is madly in love with Harold, who doesn't even seem to see her except in moments of unexpected contact: i.e., when she trips and falls into his lap as he sits in a totally unnecessary wheelchair. The slow-blooming smile on his face before he dumps her onto the ground communicates a subtle but very real sexual tension that will permeate the whole film.

She pines for him, he ignores her: it's the antithesis of practically every other Lloyd film, turning everything on its ear and releasing a madcap energy that outstrips anything in his other comedies. To add a little excitement, a dangerous anarchist plans a revolution on the island, causing all sorts of feverish violence that makes Harold exclaim, "You fellows must stop this. I came here for my health." 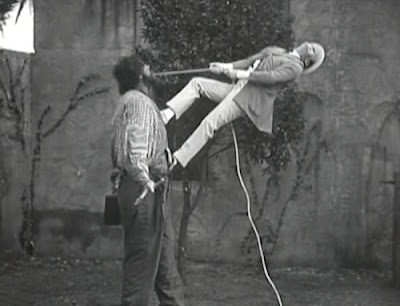 This shot illustrates one of the best Harold Lloyd gags ever: mountain-climbing up the side of a giant to try to remove his rotten tooth. (Never mind, you had to be there.) Wacky gag follows on wacky gag as Lloyd reaches a sort of fever pitch of brilliance and mad originality. At one point his nurse, dressed as a boy (a most unconvincing disguise) becomes furious with his self-centredness and hypochondria and begins to cuss him out as only one can in a silent movie. She's standing up, he's sitting, in the passive position, and once again that dreamy smile begins to play across his face before he tells her she has very beautiful eyes.

This comedy breaks every convention of the era, including the rule of the silent screen kiss: almost always quick, comedic, and preferably behind a screen. When Harold suddenly realizes he is madly in love with Jobyna, he doesn't just peck her but seizes her in his arms and kisses her with ferocious passion, something I've never seen in any other silent film, not even The Sheik. She resists for a second, then melts into his arms with a subtle leg-pop that conveys complete surrender.

How many takes were required to capture that volcanic kiss? I wonder. In any case, I envy Jobyna. There are murmurings that they were "involved", as he was involved with so many women in his lifetime. There was something seductive and bedroomy about his eyes (along with the canny intelligence and a touch of wildness) that was there for a lifetime.

And so: today, after literally years of searching, I've found a picture of that kiss! I can't find a video of it, I'm sorry, so you'll just have to watch the whole movie. Better yet, buy the DVD set, The Harold Lloyd Comedy Collection, superbly remastered with charming, energetic scores by Robert Israel and Carl Davis.

Harold, Harold, you have basically ruined my life! I have probably gained 25 pounds because of you, due to all my fretting, my unproductive fuming. I need to tell your story so badly I ache with it. I KNOW I can do this, I feel it! I have it in me, I have the goods. And I'm not always this confident about my work.

What is it about a person who has the power to wreck your life from this distance? We were alive at the same time, yes, but he died when I was just a teenager. We were on the same planet together at the same time. Aieeeeeee! My heart! When will this hopeless yearning end?


I would like to introduce you to my third novel, The Glass Character, a story of obsessive love and ruthless ambition set in the heady days of the Jazz Age in the 1920s. This was a time when people went to the movies almost every day, living vicariously through their heroes: Valentino, Garbo, Fairbanks and Pickford. But comedians were the biggest draw, and broad slapstick the order of the day - with one very significant exception. 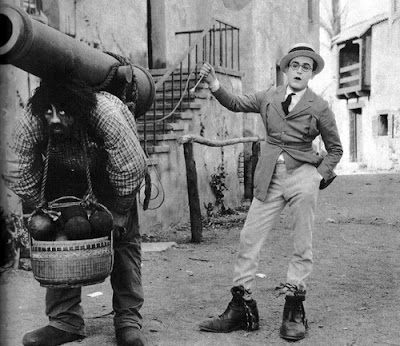 Standing beside Keaton and Chaplin in popularity and prowess was a slight, diffident man named Harold Lloyd. He hid his leading man good looks under white makeup and his trademark black-framed spectacles.  Nearly 100 years later, an iconic image of Lloyd remains in the popular imagination: a tiny figure holding on for dear life to the hands of a huge clock while the Model Ts chuff away 20 stories below.


With his unique combination of brilliant comedy and shy good looks, Lloyd had as many female followers as Gilbert or Barrymore. Sixteen-year-old Muriel Ashford, desperate to escape a suffocating life under her cruel father's thumb, one day hops a bus into the unknown, the of her dreams.  Though  the underside of her idealistic vision is nasty and fiercely competitive, she quickly lands extra work because of her Pickford-esque ability to smile and cry at the same time.

When her idol Harold Lloyd walks on the set, her life falls into a dizzy whirl of confusion, attraction, and furious pursuit.  Muriel tries on and sheds one identity after another: bit actress, waitress in a speakeasy, "girl reporter", script writer - while Lloyd almost literally dances in and out of her desperately lonely world, alternately seducing her and pushing her away.


While researching this book, I repeatedly watched every Lloyd movie I could get my hands on. I was astonished at his subtlety, acting prowess and adeptness at the art of the graceful pratfall. His movies are gaining new popularity on DVD (surprisingly, with women sighing over him on message boards everywhere!). The stories wear well and retain their freshness because of the Glass Character's earnest good nature and valiant, sometimes desperate attempts to surmount impossible challenges.

Posted by Margaret Gunning at 5:00 PM No comments: