I DON'T love boobies: or, why I refuse to buy pink TicTacs 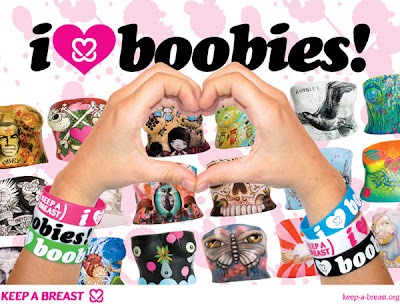 Postmedia News Oct 14, 2011 – 9:21 AM ET | Last Updated: Oct 14, 2011 10:55 AM ET
By John Colebourn
KELOWNA, B.C. — Students at a Kelowna middle school have been told to leave some “edgy” breast-cancer bracelets at home.
Springvalley Middle School has banned students from wearing the breast cancer awareness wristbands because they say the bracelets are offensive.
The bracelets, which have the slogan ‘I [love] boobies!’ printed on them, are part of a youth-oriented breast cancer awareness campaign by Keep A Breast Canada.
The wristbands were banned last month, when it was determined the language is not suitable for teenagers, said School District 23 superintendent Hugh Gloster.
Gloster said they were first made aware of the controversy by a number of parents who complained. From there they felt the bracelets violate the school’s code of conduct.
“Our code of conduct says if you are wearing something offensive to people then you’ll have to cover it up or remove it,” said Gloster.
Gloster said the Keep A Breast campaign is very different from other cancer drives.
“There’s an edgy nature to the marketing,” he said. “In some cases it has caused distraction and some people feel it is offensive.”
Keep A Breast executive director Michelle Murray has said the bracelets are for a younger demographic to heighten awareness about breast cancer.
Gloster said the school will still be active in other health-related campaigns.
“We certainly recognize the need for awareness for breast cancer,” he said.
Vancouver Province

This little story, which I first heard on the evening news (and, incredibly, the news anchor did not say what the slogan was!) sums up much of what I've been feeling in the past few years about a certain cancer awareness campaign.


It's enough already. It's enough with the tits up, or tits down, or tits hanging out. Enough boobs, boobies, tee-hee-hee, aren't we daring, aren't we modern! And most especially, it's enough with the flood of marketing, the tasteless line of every kind of goods imaginable from sweaters to mugs to pens to notebooks to knitting wool (it's all PINK, folks - why on earth would you want to knit in any other colour?). Edible goods have been creeping in, too, but I was especially offended when I went to buy some shampoo at the drug store and the clerk aggressively pitched a prominent display of grapefruit-flavoured pink TicTacs. 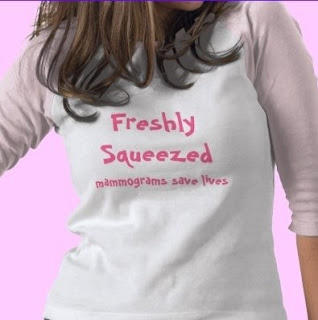 Why am I offended? Because if you really buy what this campaign is pitching, you will sooner or later come to believe certain things:

(a) Breast cancer is the #l killer of women in North America (if not the world).

(b) Selling lots and lots of pink things will cure it.

(c) The money from these pink things all goes to breast cancer research.

(d) Other forms of female cancer just aren't as important.  So we don't need a campaign for them. They'll sort of take care of themselves.

All these assumptions are completely false, but why would we know that? Steadily bombarded by the pink machine, we are slowly and unwittingly becoming mesmerized into believing what they are telling us. Or what they want us to believe. 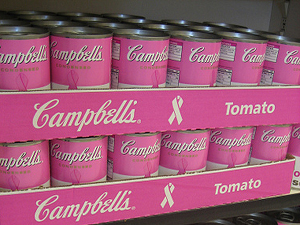 I don't know how this pink avalanche got started, but it has reached the point of nausea for me. School children wearing "I love boobies" bracelets? Just the fact that women's breasts are now glibly being called boobies makes me shake my head.

I have breasts. They have been useful to me: in fact, I used them for the function for which they were designed, and it was a wonderful experience. Now they're more of a hindrance, harder to fit with a bra, in need of mammograms and intense poking and feeling by doctors. But they're there. 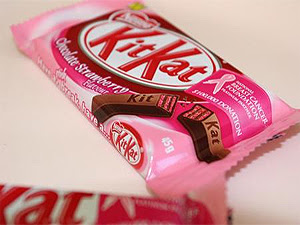 I don't think I'm a stick-in-the-mud, but I don't want anyone, not even my life partner, calling them "boobies" because it is a juvenile, vulgar term that only takes away from the dignity of the cause: or does it? Everything these people do, no matter how tasteless, is eagerly swept up and embraced by beaming women running around in pink track suits.

It's a known fact that testicular cancer is one of the leading causes of death in men over a certain age. So why is there no "I love balls" campaign, with pictures of. . . oh never mind.  Rectal cancer? It might be misconstrued if we claimed to "love" assholes (for surely that term is no more vulgar than "boobies"). And how can you love ovaries? I love what they DO, mind you - they're miraculous little organs. But a cancerous ovary is a ticking time bomb, not a bouncy little thing you put on a bracelet.

But unfortunately, pink is not the only colour. This morning when I took my coffee into the living room, I noticed a 3" stack of greeting cards on the coffee table.

I asked my husband, "Where the hell did these come from?"

"I don't know, I get them all confused now." 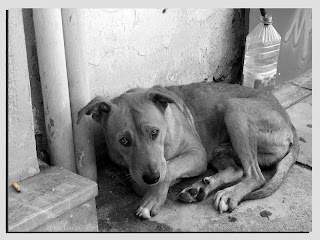 The "stuff", the junk they force on us (tacky "holiday" cards with teddy bears on them, pens we really don't need, and - most recently - one of those environmental tote bags, an awful one made out of thin paper), is meant to strong-arm us into donating to the disease or cause of the week.

Through guilt. No other reason. We don't ask for this stuff, we don't want it. But it's impossible to get rid of it, to get ourselves off the mailing list. So it just keeps coming, and it's hard to throw it away. It stares back at us, accusing. What sort of skinflint won't give to a charity that is sweet and caring enough to send you a gift? 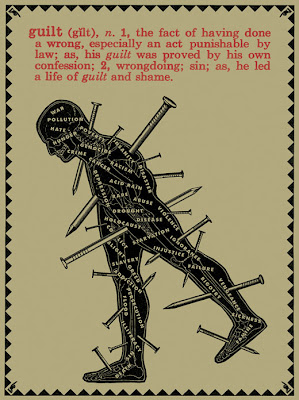 Maybe they think this works, and maybe it does. As with the pink juggernaut, these charities must hire some pretty obnoxious ad-men (and women) to design aggressive campaigns to make everyone feel lousy about themselves if they don't do what they tell us we "should".  In my case, it makes me so angry I won't even consider donating to their lousy cause (and statistically, only a fraction of our hard-earned dollars ever makes it to the research foundations or pink bra-makers or whatever-it-is we think we're supporting through our financial contributions). 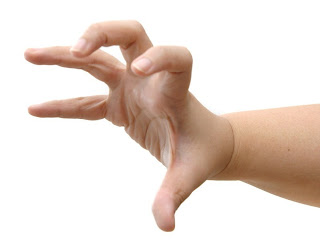 There's something even worse, and that's what is happening at checkout counters in stores everywhere: "Would you like to donate $2 to the Send a Quadriplegic Little Girl with Terminal Cancer to the Circus Foundation?" Things like that. There are so many of them now that they all sort of blur together. Who knows how many of them are bogus. Some people give to all of them, all the time, because they just feel so bad if they don't.

By the way, it used to be ONE dollar. Somewhere along the line there was a 100% increase, and not only did nobody say anything, everybody just ponied up. 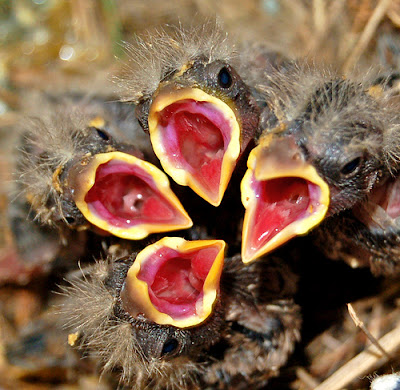 This kind of adds up. If you went on a shopping trip and went to five stores, well, I don't have to do the math, do I? If you went shopping one day a week for a year, it adds up to. . . but we don't add it up, that's the problem. That's how they get us. Nobody will mind tacking on a couple of bucks to save a sick pony or whatever it is.

One more thing. These bona fide charities are the thin edge of the wedge, allowing scammers to move in like an infection and penetrate the crack in our hearts. The other day when I was walking down Granville Street in Vancouver, I saw a scruffy-looking young couple with hand-made signs around their necks that said, "Save the Children". They were good talkers, and there were lots of takers (or should I say givers).  But then, they had already been softened up. As P. T. Barnum put it, there's one born every minute.

I realize charities are up against it, but so are we. There has to be a better way than squeezing us like this. The breast cancer campaign is an example of some very highly-paid PR person creating a monster with grasping tentacles reaching everywhere. It has completely mowed down public awareness of other forms of cancer that are infinitely more deadly. A big bucket of pink paint has been splashed on everything, and nobody says anything because it's like stomping on a bunch of baby chicks. You simply can't.

I'll make a deal with these people. The day they launch their new "I Love Colons" campaign (with everything in brown, of course), I'll wear their wretched booby bracelet with a wink and a smile. 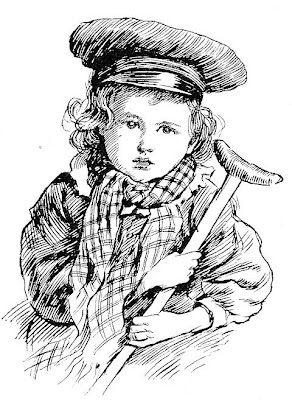 (Post-script. I know someone will accuse me of being a skinflint who doesn't care. I'm not saying "don't give", just "be selective", not to mention careful. I'm not against breast cancer research, but those people will NEVER get a donation from me because I find them so offensive in their tactics. Over several decades I have donated regularly to UNICEF, particularly during natural disasters. They focus on the plight of children worldwide, have done it for a very long time, and I have never heard about a scandal connected with them. More recently, I give to the Juvenile Diabetes Research Foundation: my little granddaughter Lauren has Type 1, so I often donate in lieu of a gift at Christmas and birthdays. I know my husband gives to a couple more, his own personal choices: kidney and a women's shelter, Covenant House, I think. That's quite a lot of giving. But NO PINK, please.)