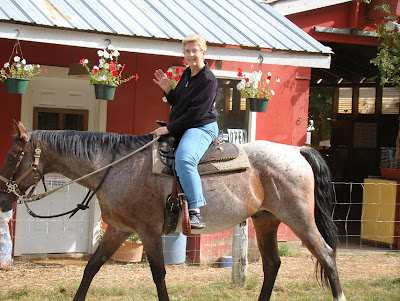 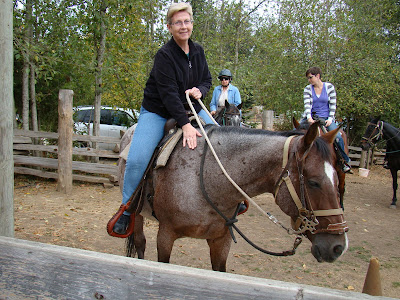 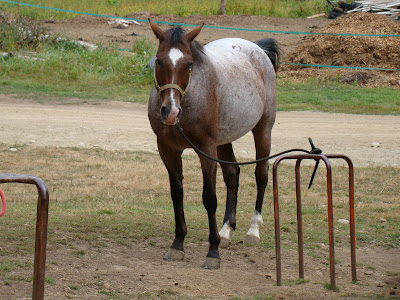 Last week I had a wonderful riding experience on Vancouver Island at Tiger Lily Farms. I got to ride Bentley, a lovely roan Quarter horse with an amiable personality and a penchant for grabbing leaves that brushed his nose over the trail. Oh how I wish. How I wish I could've taken Bentley out on my own, for a nice meander and perhaps a canter or even a bit of galloping, but this isn't an option for me now. Riding for an hour with a guide cost $40.00, which seemed like a lot until I checked prices around here and found out they're $55.00 per person per hour, minimum booking of four, with a $100.00 deposit.
Did I appreciate having a horse of my own when I was age 10 - 13? Of course not. I am embarrassed to say I eventually lost interest. I was in high school and it wasn't cool to be horsy then. Rocky wasn't a registered anything, certainly not a Quarter horse like Bentley (though I used to say he was "1/4 Quarter horse"). He was a trail horse well-trained to tolerate any kind of rider, even a kid who steered him into some pretty bad situations (like being stuck to the shoulder in a mud-wallow). 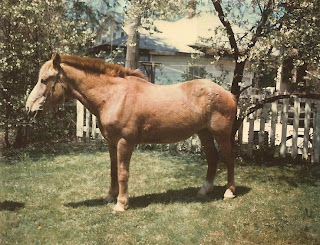 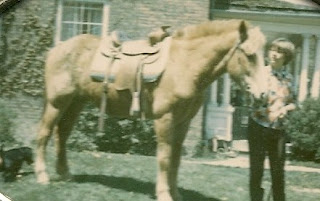 I realize in these primitive archival photos that he seems to have too big-of-a-head, which he really didn't. The style of his mane could be described as a Mohawk, more for ease of grooming than anything else (I think his unshaven mane would have been a tangled jungle in which curry-combs would have been lost forever). He was what was called a strawberry roan, a sorrel (redhead) with a lot of creamy white sprinkled through his coat, especially on his face and rump(though it's hard to see it here).
My mother used to say "Rocky has a pink-and-grey face." I remember a kind eye and a rubbery nose perfect for kissing.  He was a "character" who would prance around the pasture trying to evade the bridle (prance? My ass - he was putting it on to annoy me). If we crossed a stream, he would stop and splash vigorously with a foreleg until I steered him the other way.
He once broke out of my back yard and took off like a shot (back yard? Yes, these photos were taken when I had the bright idea of riding him the 2 miles or so from the boarding stable to my house). My Dad said, "I didn't think that horse was so fast." He was a strawberry blur, his hoofs clopping the pavement at a furious rate, and by the time our car caught up with him he was contentedly munching hay in the barn, his coat unusually dark with exertion.

I think horses have taken on an almost mythical significance to me. I was born in the Year of the Horse (not that I believe in such things!) and have come to see the horse as a symbol of absolute freedom. Even the most highly-trained have a streak of wildness in them, much as cats do. The quietest horse can spook (as Rocky did once, seeing a gum wrapper on the trail, causing me to say, "You idiot, you're doing that on purpose").  I have sat on bolting horses, horses who tried to scrape me off under a tree branch, and I stayed on. Not because I'm a good rider - I'm not, particularly - but because I feel like I'm one with them. Or one of them? Almost.﻿
Posted by Margaret Gunning at 9:43 AM No comments: