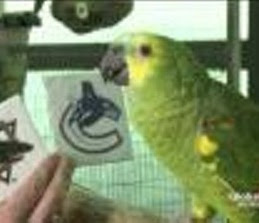 Canucks win predicted by Cosmo the Parrot
Move over, Paul the Octopus (may his glorious FIFA World Cup predictions never be forgotten as he rests in peace). The Vancouver Aquarium now has its own eerily accurate animal prophet for the NHL finals: Cosmo the Parrot.

Amazon parrots are famous for their abilities to imitate human speech, and Cosmo, a 13-year-old, female blue-fronted Amazon, is often heard saying, “Come on,” and “I’m the bird.” Foresight, however, is a bit rarer.

Canucks win Game 1 in dying seconds But, according to Vancouver Aquarium staff, Cosmo has accurately predicted the outcomes for all five games when the Canucks played the Sharks last month.

“I didn’t teach her at all, I just basically held up two cards with pictures of an orca and a shark, and asked her, ‘Who’s going to win game one? Who’s going to win Game 2?’,” said keeper Grant Tkachuk, laughing. “I even shuffle them so they’re not in the same positions. She will look at them, and then she will walk away and she’ll come back, and look at it again, and she will pick one.”

Mr. Tkachuk said he didn’t think anything of it at first. Therefore, he was “quite surprised,” when, after the Canucks/Sharks series was over, he realized Cosmo had gotten all the match outcomes correctly.

Last week, Mr. Tkachuk created new signs for Cosmo, in light of the Canucks’ face-off against the Boston Bruins for the cup. So far, one of her predictions has come true: