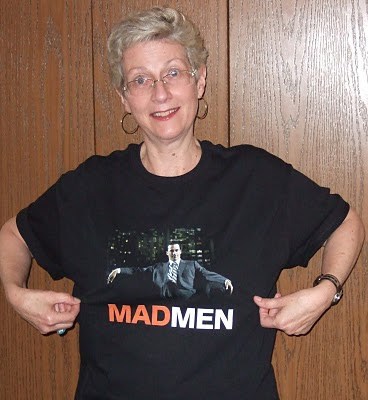 (Note the placement of Don's hands. Just a concidence? I don't think so!)
Posted by Margaret Gunning at 11:38 AM 2 comments: 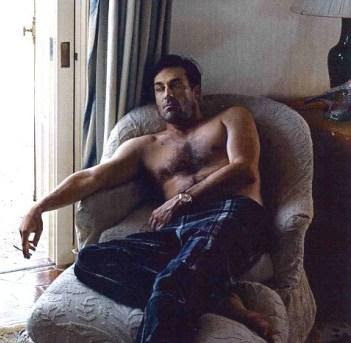 'Mad Men' Season 5 set for 2012, negotiations with Matthew Weiner ongoing - From Inside the Box - Zap2it

I haven't even really written about Mad Men yet, and here I've already got the t shirt (from eBay, no kidding, it's great). I don't think I've ever been as involved with a show, any show, in my life. Maybe I hesitated to write about it because I'd have to give a lowdown on all the characters and all the situations, a messy tangle which approximates real life more accurately than anything else I've seen.

But I do have concerns. It seems Matthew Weiner, the genius behind the show, is stamping his foot at proposed budget cuts and time constraints. The network (AMC) and the production company (Lionsgate) want to cut 2 minutes out of each episode to allow for a few extra commercials (I'd say, maybe 5 or 6). Doesn't sound like much, does it? Until you realize that in 2 minutes, a character can die, another character can be born, the business can crash or be reformed (which it already has a few times) . . or even, with a sudden quirk of the eyebrow, Don Draper can make the whole Mad Men universe disappear.

Meantime, horror of horrors, AMC has delayed the debut of Season 5 (slated for summer) until March 2012. Gulp. Almost a year. Does Weiner approve of his masterwork being clawed back like that? Whose nose is being twisted here?

In case you haven't heard of this show (and for God's sake, where've you been for the past 4 years?), it's a slightly surreal take on Madison Avenue in the 1960s. MM takes a huge chance in covering a year per season, unlike MASH which dragged out the 2-year-long Korean War into 11 years (with 11 Christmases in a 2-year period! Those folks must've been mighty festive.) So we're already into, what, 1966? If the show is really successful, it'll spill over into the polyester-and-disco atmosphere of the '70s, which I frankly don't think will work. So they'd better squeeze this juicy material while they still have time.

Another option is making Mad Men movies, but like the Sex and the City franchise I think they'd just writhe and die, the quirky maverick spirit of the series totally bent out of shape by Fox or Warner Brothers or whoever inevitably takes over the whole thing. Sounds like Matthew Weiner will only surrender his show over his dead body: like Charlton Heston's rifle, they'll have to pry it out of his cold, dead hands.

But as I was saying before I digressed (it's Easter Monday, for God's sake, a weird sort of non-day, so don't expect me to make much sense), I'm beginning to see why Sterling-Cooper-Draper-Pryce's art director Sal Romano (played by Broadway actor Bryan Batt) was canned so abruptly in Season 3. It's not that his character wasn't working out. Sal's dismissal was a budget cut, nothing more or less. They couldn't afford him any more.

He was gay, yes; his story line was a bit bizarre, but he had the acting chops and was up for it. In fact, he was one of Mad Men's more subtle characters, hiding his forbidden gay urges under a cloak of suave Old World charm that inspired female crushes. I noticed he was also very high up in the opening credits, which has everything to do with agents and contracts and negotiations and status and (ultimately) paycheques. The budget for MM seems to be mysteriously dwindling (not enough product placement? Can we make the Mrs. Butterworth's bottle a little more prominent on the kitchen table?), so network execs are likely pondering whose head will roll in Season 5.

None of this makes any sense to me. Why is this happening? How could such a ravenously-popular, culture-transforming series be running out of money? Why hold it hostage? Is it to build up viewer hunger (which, with the average 3 1/2 -minute attention span, will probably backfire)? It just feels like they've kicked it into the next solar system. Even waiting for it to start at the normal time has been agony, for I think Don Draper/Jon Hamm is the best-smelling man on TV. (That's another post entirely).

MM has garnered a big basket of kisses already, but I'm beginning to think Emmys are kind of like Oscars: the kiss of death, not just for a career but for a whole series. (I'll never forget one of my favorite comic actors, Tony Randall, receiving his statuette after The Odd Couple's cancellation and saying with a rueful smile, "This is wonderful. Now if I only had a job.")

Betty, well, she's about as bland as that perforated Pillsbury crescent roll dough (half-baked). Could she fall off a horse or something? How about that creepy neighbor boy Glen (who turns out to be Matthew Weiner's creepy son: so, forget that one, he'll stay until he's voting age).

But there are others I can't do without, so if the network execs get their greasy little paws on them, I swear I'll walk. In particular I want to see Don's 10-year-old daughter Sally launched into the shark-infested waters of adolescence (for she's one of the most gifted actresses in the whole series and is evolving brilliantly: hey, guys, if you send her away to school in Switzerland, I swear I will quit watching forever!).

I can't remember ever doing this before, but I always watch each episode of MM multiple times: when they're new, then the next day, and then, after a few weeks or months, again. In each and every case, I've caught things I didn't "get" the first/second times around. Though everyone claims the '60s were a simpler time when things moved much more slowly, this show is for the quick of eye and swift of mind. Things can blur past you with the speed of a silver bullet. Not to be content with three viewings, I now have the DVD set(s) so I can watch them all again whenever I want. It doesn't matter that I can anticipate what will happen next: like Casablanca or Gone With the Wind, familiarity only enhances the experience.

I've seen a curious number of conflicting articles on the subject of Mad Men's mysterious, infuriating delay. AMC is "officially" saying they can't show MM at the same time as Breaking Bad or Weird Undead Zombies from Hell or whatever the bleep it is. Just a scheduling conflict! Why, I don't know.

Probably because that's not why. This is all about Weiner, who knows damn well he has this show in his hot little pocket, and is consequently stamping his hot little foot. It's power-tripping and yo-yo-jerking and manipulation, while the cast probably holds its breath, each hoping they won't pull the short straw and be relegated to the phone booth in the gay dog park where we saw the last of Sal.
Posted by Margaret Gunning at 10:33 AM No comments: 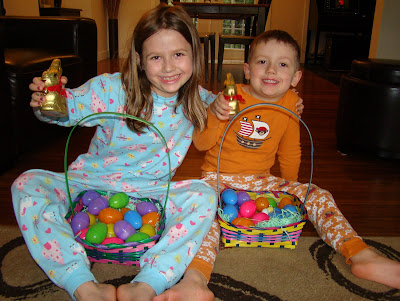 Posted by Margaret Gunning at 8:35 AM 2 comments: