Way Down Yonder in The Cornfield by The Brilliant Quartet (1891)

I discovered another version of this rather awful song, very close to the one I remember from my wayward youth, but I just couldn't post it, I couldn't. This one has the same flavor, with the advantage that you can't understand the words.
Posted by Margaret Gunning at 10:09 AM 2 comments: 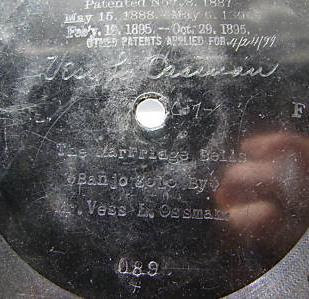 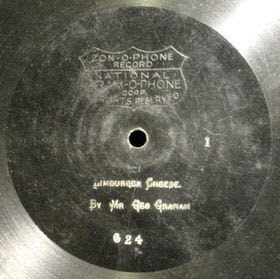 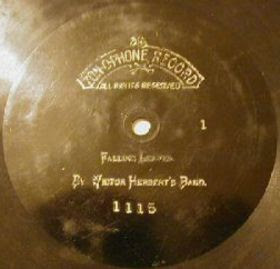 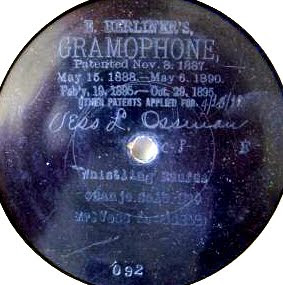 This isn't really about that, but close. I think these recordings came in brown paper sleeves or something. I saw one once: it was called A Cornfield Medley, by the Haydn Quartet (nothing to do with the composer: this was a male barbershop-type group who did "minstrel" songs. These songs also had a really evil name, like an animal with a mask and striped tail, but it's so bad I can't say it.)

This old record, barely audible for all the surface racket, was blatantly racist, but fascinating. It only lasted about a minute and a half. I'm not sure if the label on it was this primitive, but the record itself seemed to be made out of slate from the Cretaceous period. It was heavy, man. Heavy. The grooves were wide apart and it was only recorded on one side, because it literally had not occurred to anyone up to this point to record on both sides.

The only alternative to these slabs of slate were cylinders. Cylinders were made of wax and very delicate, unlike the Flintstone discs that were sturdy (unless you dropped them), if barely audible. There was always a loud announcement of the song title and artist at the beginning of the cylinder, because there was no way to mark the information on them.

But these! These things! Paper labels wouldn't stick to them because glue was made out of old horsehides, so someone got the idea of etching the title information right into the slate or slag or whatever they were made of (my sources say hard rubber, but it's hard to believe it wasn't igneous rock).

I wish I had one of them in my hands right now so I could weigh it in my hands and smell it and play it on my gramophone (which I don't have) and enter that spooky time machine. Lots of collectors have put their prized recordings on YouTube, which is something, so I'll look for them. I've found the Cornfield Medley on two other sites, but for some reason most of the horrible language has been taken out.