Quite possibly the most beautiful photo of Harold Lloyd EVER 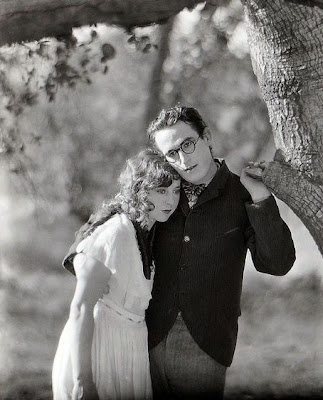 What is it about you, Harold Lloyd? What's the mystery?

Part of it is, of course, the fact that you are plain gorgeous. Add to that superior acting skills and a naturally balletic/athletic grace, and you have a killer combination.

But most of all, Lloyd ("dolly" in anagram) had an indescribable charm, and a way of gently but insistently taking you on-side. His was often the humor of humiliation, something that might be hard to take from a lesser-skilled comedian. What he was saying, without coming out and saying it, was, "Sometimes life is embarrassing. Sometimes we feel plain foolish. Has this ever happened to you? Like this. Let me show you."

And he'd show you, and you'd groan and shake your head, seeing yourself, and you'd laugh. And laugh.

It wasn't that way at all. If Lloyd was driven by anything, it was romantic yearning. In fact, the few critics who did understand him have always insisted that he single-handedly invented the genre of romantic comedy.

In his most famous movie, Safety Last! (in which he scales that skyscraper and dangles off the hands of a huge clock), his task is anything but a foolish daredevil stunt: he has to prove himself to his fiancee, the peony-sweet Mildred Davis. Always there's that struggle to prove his worthiness, to put his personal anxieties aside for the sake of a higher purpose (and what purpose could be higher than love?).

In Girl Shy, when his "how to romance women" manuscript is laughed and jeered out of the publisher's office, he feels like such a failure that he's purposely nasty to the woman he adores, cutting her loose from a loser at the expense of his own heart.

My God! That's the most romantic thing I've ever seen!

Yes, and there's more. That race to the church at the end of Girl Shy: it's a flat-out epic, the shy, stuttering, failed writer galloping through hell-fire to prevent his (already spurned, but still adored) inamorata from marrying a callous bigamist. This sequence, one of the finest in movie history, has to be seen to be believed, and it's obvious he's doing most of the stunts himself, working without a net in the typical Harold Lloyd way.

Lloyd didn't like heights, and I don't know how well he liked thrills, but he seemed to need to seek them. Testing, testing himself all the time. Against what, we don't know. When I researched The Glass Character, my novel about Lloyd and his times, I discovered a complicated man who seemed simple, who maybe even thought of himself as simple. His intelligence was subtle, mercurial, and worked at light-speed. It's that canny look in his eyes, friendly, yet in some way sizing everything up. As he got older, that look deepened. The charming old gent was still fierce inside, still looking for a duel somewhere, maybe not so much to win as to prove to himself that he still had it.

Harold's nickname was Speedy. He liked it when people called him that. It's a boy's name, isn't it? - not the kind of nickname a middle-aged man might choose. Did the name choose him, I wonder - or was it Foxy, his charming, twinkly old Dad, a man who could sell snake-oil to an anaconda?

When he finally had to let go of an acting career that had become his life's obsession, Lloyd had to change gears quite dramatically, finally taking up a dizzy array of hobbies and athletic pursuits. What people didn't always know about him was his dedication to philanthropy. (He didn't believe in thumping his own drum.) Still, through the Shriners, he did a tremendous amount of good for children's hospitals. Especially burn units. Lloyd had been horribly burned in an explosion when he was still in his twenties. You don't forget a thing like that.

I can't say everything about Harold - can't say anything, can I? - except that I love him. The novel waits in limbo, and I don't know what, if anything, is going to happen to it. I ache to see it in print, for it's the work of my life. If it doesn't make it, I'm going to feel like Harold in that publisher's office. The look of devastation and the collapse of his dreams goes way back inside him, not just in his eyes but in his spirit, as if he has somehow, uncannily, made his soul visible. This isn't just great acting, it is a powerful actor's instinct for reaching into the psyches of his audience. What has just happened to me, dear viewers, has also happened to you, and you know it.

I really thought that when I finished writing The Glass Character, someone would get as excited about it as I was. So far the silence has been deafening. Hell, Harold's movies made more noise than this. Being ripped to pieces is easier than this indifference. I already posted about how I was literally rubber-stamped by an agent who wouldn't even waste a sheet of his stationery on me but sent me back my own letter with a stamp on the corner of it that said, "List is full".

I'm not supposed to take this personally, but it's kind of like losing an arm, and I can't let go of the obsession. Well-meaning people tell me to just enjoy the writing process and forget about all the rest. But as I've written before, it's like a concert pianist, trained over decades, being told he should be perfectly happy performing in an empty hall.

You're not supposed to fall in love like this, you're not supposed to be subsumed. It ain't professional. But it's the only way I know how to be. I caught a bad case of Harold Lloyd, and right now I've got it bad. I may never recover. Sometimes I wonder if I even want to.
Posted by Margaret Gunning at 2:26 PM 2 comments: