I don't understand this at all: Harold Lloyd synchronicity 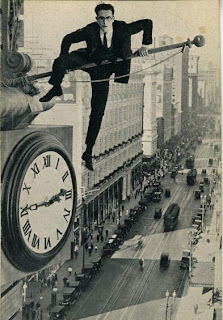 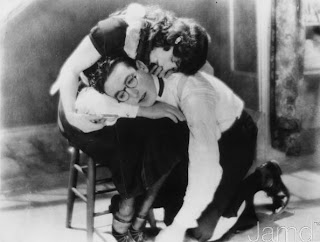 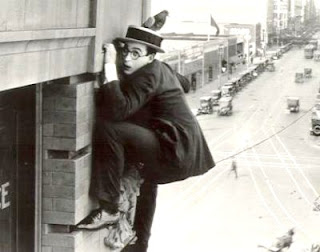 When I started this blog some months ago, I had a sort-of theme in mind.

I wanted it to be basically an ad for my fiction, so maybe, just maybe, somebody-out-there might see it and take some sort of an interest.

I mean, somebody who might be able to help.

This didn't happen. Instead, I became more close-mouthed than ever about the subject of my latest (unpublished) novel, The Glass Character, a fictionalized account of the life and times of silent screen comedian Harold Lloyd.

You know: that Harold Lloyd. The ordinary fellow, looking a little geeky in his hornrimmed glasses, who ended up doing daredevil stunts such as hanging off the hands of a huge clock 20 stories up.

I can't get into the complex, often paradoxical life of Lloyd right now. Instead, I want to write about some (many!) examples of synchronicity I've experienced since I began to research and write about this man a couple of years ago.

Synchronicity being, as I understand it, coincidences that don't seem like coincidences because of their existential/emotional significance. Or, in this case, sheer numbers.

It started small. I'd see the name Lloyd on a street sign, on the side of a truck or train, on a realtor's sign, in movie credits, in novels, in magazine pieces, in - well, it could be anywhere.

This escalated over time. It became routine to get at least one Lloyd-sighting somewhere, every day. I mean, every day. Sometimes, there were two or three.

"Oh, you're just noticing it because that's what you're writing about," my friend claimed. Ahhhh, maybe. But when I watched an odd little British comedy called The Wrong Box, I counted, not one, not two, not three. . .

There were five references to the name Lloyd, in the credits (2), in the cast (2), and even in a list, the Tontine, which was the pivotal subject of the movie. When people got bumped off, their name was crossed off the list. One of those names was Lloyd.

Would it surprise you if I said I am still getting this, nearly two years later? The name Lloyd jumps out at me from a newspaper article (but never when I am looking for it!), a doctor's sign, a DOG'S name (yes, a dog!), or just about anywhere else. And in Googling "Lloyd synchronicity", I had to give up after only a few examples.

One blogger kept encountering the name Frank Lloyd Wright, over and over and over again. A Kathrine Lloyd had a display of art prints called Synchronicity. Elizabeth Lloyd Mayer, a psychiatrist, contributed to a paper on synchronicity, a subject both acknowledged and discredited in the psychiatric realm. (Nobody wants to look that crazy, so everyone thinks they're the only one.) And so on, and on, and on, probably into the hundreds, if not the thousands.

Maybe I should tell you about the gold beads, or maybe I shouldn't, because I can't guarantee I didn't misinterpret this. Along with being a serious painter, dog breeder, amateur scientist, photographer, and Imperial Potentate of the Shriners, Harold Lloyd was a master magician, adept at sleight-of-hand (and this in spite of the fact that he lost the thumb, index finger and half the palm of his right hand in an accident early in his career). He made things appear. He made things disappear, then appear again. The coin behind your ear, or -

OK. Things started to disappear, but only in a certain spot in the house. It was in the centre of the bedroom upstairs. Watches went away. Rings. Gold pens. It was weird.

Then came the gold beads. Or, rather, the one. I have a necklace with four tiny charms, each representing one grandchild. I had these mounted on a gold hoop earring, and for some reason I wanted to unfasten it, perhaps to change the order of the charms.

The four were separated by small gold beads.

I unfastened the hoop, and, ta-poinggggg. One of the gold beads shot across the room and disappeared.

I was plenty miffed. I crawled all over the bedroom floor on my hands and knees. No gold bead. Vacuumed and vacuumed, then searched the gritty, fuzzy contents. No gold bead.

It maddened me. I looked for another gold bead, and could not find one just like it.

So I sort of gave up. Months went by. Maybe a year. I was walking around in my bare feet in the opposite side of the bedroom from the ta-poinggggg, then felt something sticking on the sole of my foot.

I put the gold bead into a tiny drawer in my jewellery box.

More time went by, maybe months. I was walking barefoot in another part of the bedroom. I felt something stuck to the bottom of my foot.

Maybe, somehow, had the gold bead jumped out of the drawer? Or what? I knew I didn't have another one. I had already given up and replaced all the beads with shitty-looking ones, and glued the hoop shut. No more ta-poingggggs for me.

So I put the bead in the drawer with the other one. But you're not going to believe what happened after that.

I now have three perfect gold beads in the drawer. Does this have anything to do with the fact that the rather odd, not-terribly-common name Lloyd keeps popping up every day, sometimes two or three different times in different contexts?

What does it all mean? Lloyd always looks to me as if it spells something backwards. It almost spells "dolly".

It maddens me, because right now I have no prospects at all. I think The Glass Character is the best thing I've ever written, and at the moment it looks like it will die on the vine because agents and publishers won't even read my covering letter before firing it back at me with a (quite literal) rubber-stamped rejection that makes form letters look respectful.

Harold, either lay off, or help me here! I have enjoyed your presence immensely, but I can't believe it has no other purpose than to provide an odd but enjoyable experience, the kind you wouldn't want to relate at a psychiatric conference.

After all. . . they might think you're crazy.
Posted by Margaret Gunning at 9:30 AM 2 comments: