Why won't my doctor listen? 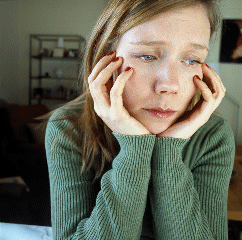 Is this too inflammatory to write about?
We're all so dependent on the medical profession, especially as we age (and we're all doing that). We find we're developing symptoms, some of them mild and some of them alarming. And we don't know what they mean, and we don't know why they won't go away.
We're lucky if they go away. If they don't, we may have to step onto a dizzying merry-go-round (or awful-go-round) of baffling "treatment" that seems to be getting more and more removed from simple human attention.
It's easy to send someone away to the lab for a CAT scan or a blood test or for a consultation with a "specialist" who sees the world through the narrow lens of only one body part. When it all comes up negative, and if we try to speak up and say something like, no, that's not good enough, suddenly we're a "nuisance patient" with psychosomatic disorders (or maybe a hidden drug problem).
It gets worse. If we really have something wrong with us, it can be misdiagnosed and misdiagnosed for years, even decades, sometimes radically changing with every doctor you see. (Don't ask me how I know.) It can be mismedicated, overmedicated, or not medicated at all (though the former is more likely).
When your doctor packs you off to a "specialist", batten down the hatches and bring with you (along with a quart of your urine and an ultrasound of your kidneys) a medical dictionary, so you can try to keep up. You won't be able to. Doctors are taught to speak in this language, and it keeps them distant from all these needy people. These people who seem to want something totally unreasonable (care).
They used to call it care. It's rare now. Getting through medical school is a meat grinder, and only the strong survive. It's easier to send someone off to the lab than to try to figure out what is really going on within the context of the patient's individual life.
There is no solution to this. We're stuck with doctors, and with trying to deal with them and translate what they really mean. About a hundred years ago I went through an excruciating period in my life, didn't feel listened to at all (because I wasn't), and went through four doctors in the space of a year. I was labelled, if not branded, a hopeless hypochondriac who was "unstable" (and whatever you do, don't get labelled THAT).
When I finally found a good doctor, which I did, I stayed with her for fifteen years, until she finally retired. What happened to the diagnosis of hypochondriac? Were "they" wrong, did "they" misread a crisis situation and assume that I was that way all the time, throughout my entire life?
Yes!
That's called disrespect, and it's rife in the medical field. We're lab rats, folks, and finding real care is as rare as the dodo. "It's not that I'm calling you a malingerer," one doctor said to me. But who brought the subject up? I wanted to say back to him, but didn't dare, "It's not that I'm calling you a quack."
But I was. And he was. We are too often trapped by very limited options, and by the Byzantine labyrinth of professional bafflegab and passing the buck. But if we complain - oh, if we complain. . .
So I'm complaining, right now. I know this won't do any good. But I'm going to say to the medical profession what a doctor once said to me.
Shape up.
Posted by Margaret Gunning at 10:55 AM 2 comments: