Always the Twain shall meet 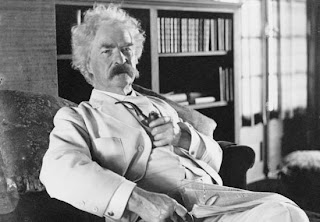 You gotta dig this Mark Twain fella.
He seemed to move from situation to situation like a mercilessly sharp camera lens, taking everything in and giving it back, inimitably, in Twain. Though he was one of the great humorists, he was often melancholy, and no one can find a smiling portrait of him anywhere. He experienced several incarnations within one lifetime: riverboat pilot (where he may well have cried out his own pen-name to indicate safe waters), rough-and-ready reporter in the Wild West who converted every story, momentous or trivial, into sharp-pointed satire, and - let's not forget - one of the most celebrated writers of the Western World.
But before he did all that, he wangled himself passage (sponsored by the newspaper he wrote for) on a luxury liner set to explore the Holy Land. The resulting semi-factual book The Innocents Abroad converted his fan base from small but loyal, to huge and clamoring. (Clamoring for his next book, that is.) Suddenly everyone wanted him to come to their town to lecture and spin his yarns, eager to partake of his dry drawl and lightning mind. His fame began to spread like a YouTube video gone viral, except that in this case, genius was behind it all.
I found this paragraph, and it's neat because it's so Twainian. On the Azores island of Fayal (don't ask me where that is), he and some fellow travellers hired some donkeys, presumably to carry them up and down rough terrain, and panic ensued. One donkey entered the open door of a house, scraping its rider off to land with a thud. At one point they all ran into each other and fell down like bowling pins. I guess you hadda be there.
So now I come to the neat part.
"The party started at 10 A.M. Dan was on his ass the last time I saw him. At this time Mr. Foster was following, & Mr. Haldeman came next after Foster - Mr. Foster being close to Dan's ass, & his own ass being very near to Mr. Haldeman's ass. After this Capt. Bursley joined the party with his ass, & all went well till on turning a corner of the road a most frightful & unexpected noise issued from Capt. Bursley's ass, which for a moment threw the party into confusion, & at the same time a portughee boy stuck a nail into Mr. Foster's ass & he ran - ran against Dan, who fell - fell on his ass, & then, like so many bricks they all came down - each & every one of them - & each & every one of them fell on his ass."
I wonder who else could've gotten away with this. Twain was known to be outrageous and play with social taboos, once lecturing a gentleman's club about the pleasures of "onanism" (a code word for masturbation), stating that it was the birthright of every red-blooded American boy. To say this at a time when most people thought it would make you go irretrievably mad, or at least make your guy parts fall off, was provocative indeed.
But then, the best writers don't colour inside the lines. Do they?
Posted by Margaret Gunning at 9:44 AM 2 comments: