I think I'm going out of my head 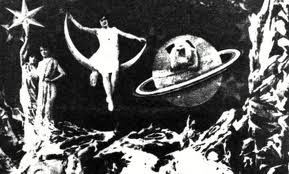 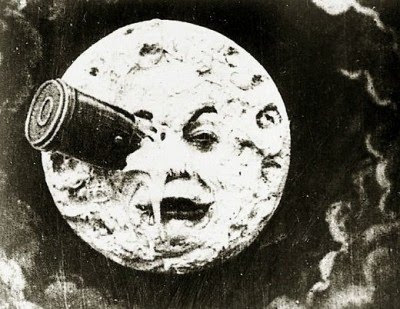 Ah yes, Georges Melies. I keep encountering him, this odd little Frenchie/genius. The other night (I still have a hangover from it), Turner Classics had a special on him. Sixteen short films. Sixteen. Ay-ay-ay. These are hallucinatory otherworlds, the strangest things I've ever seen.

He started in France, a hotbed of early film, around 1896, when the medium was so new it was mostly seen as a form of amusement, a toy. No one saw the potential in it. An accomplished magician and visual artist extraordinaire, Melies began to film some of his more potent stunts. Audiences loved it: and to this day, more than 110 years later, they still ask themselves, "How did he do that?"

This weird and funny business with the heads, technically remarkable for its day, was made (incredibly) in 1898, back when a sneeze or an unromantic kiss was considered filmworthy. The unbelievable split-exposure film in his one-man band was later ripped off by no less a personage than Buster Keaton, who was credited with inventing it. Much, much later, Oscar Levant tried the same thing in An American in Paris. Ho, hum.

The Melies experience last night wasn't entirely pleasant. Those early, quick, magical stunts were fun, though filmed in a static manner, with one camera in long shot pointing at a stage. (Please forgive the horrible cropping and truncated music in this clip: it wasn't me.) This seemed to indicate that Melies' imagination sometimes ran ahead of his skills as a cinematographer/director, so that he never attained the revered status of a Fritz Lang or a Murnau.

As his films evolved, florid sets made of cardboard and papier-mache seethed and quivered visibly in the background. Leaping devils (a Melies favorite) appeared and disappeared, and lovely maidens in white gauze tiptoed in and out (or flew through the air in a way which seems to explain the inspired lunacy of Monty Python's Terry Gilliam. I don't know how much Melies Gilliam watched, but maybe he was infected with the same moonstruck folly.)

Or folie. These little weirdies had little or no discernable plot, to the point that a man with a French accent thicker than mayonnaise had to narrate the incomprehensible action. While we listened to his bizarre Clousea-esque pronunciation, with the em-PHA-sis on the wrong syl-LA-ble, we (or I) became more and more disoriented. Things were blowing up. People were winking out, or jumping out of things. Man went to the moon in a giant bullet, landing in the eye of a nasty-looking guy with white icing all over his face.

I didn't last the full sixteen films, but kept fast-forwarding my PVR recording, skipping over some florid hand-colored things in which the color wavered and strobed like some sort of acid-inspired hallucination.

Obviously, this fellow colored outside the lines of reality.

I don't know a lot about Melies, and right now I'm too exhausted to find out. Robert Osborne, who must be very ill because he is 50 pounds lighter and could barely speak, told us something I had already read somewhere.

Most of Melies' 500-or-so films were destroyed, and for a very practical reason. His studio went bankrupt in 1913 (for Melies had lost his audience, too baffled to sit through all that escalating strangeness), and his movies were stashed away, only to be confiscated by the French government when World War I broke out.

His films were made of celluloid (or -lose, can't remember which), a substance that had real value to the army: they were melted down to make boot heels for the soldiers. So all those men, dying in the trenches and singing "inky binky polly voo" (just kidding - that was the Americans) were literally walking all over him.

A sad and ignominious end for a unique and very strange artist, who seemed to want to do Spielberg-esque effects with cardboard and smoke bombs. But these two little gems are enjoyable and, in true Melies style, a little bit creepy.

And no, I don't know how he did that.

Posted by Margaret Gunning at 9:43 AM No comments:

Posted by Margaret Gunning at 9:40 AM 2 comments: