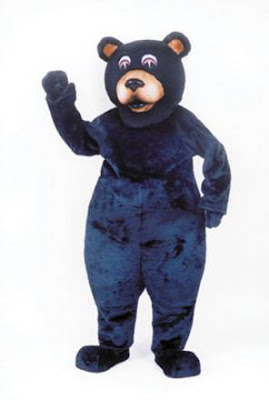 This is the kind of story that will likely appear on Dateline sometime next year, with Keith Morrison (he of the earnest, wrinkled, sardonic face, silver hair and ageless blue jeans) grilling Mary Beth Harshbarger about shooting and killing a "black mass" in the wild woods of Newfoundland.

The black mass in question turned out to be a husband. Her husband. The big issue here is whether or not she knew the difference.

The "weapon"was a hunting rifle given to her by her late husband Mark. Certain family members smelled fish, claiming Mary Beth was a crack shot, not likely to confuse Mark with a black bear.
Unless she had grown tired of this. . .black bear. . . and wanted him out of the way.
Why would anyone suspect such a thing? Rumour has it that she was getting mighty cozy with Mark's brother Barry. ("Bear" for short. Just kidding.) The family is now as bitterly divided over this issue as the Hatfields and the McCoys.

The judge must have decided that Mark looked more like a "big black thing" than anyone realized. Cleared of all wrongdoing, Mary Beth whooped and hollered, tooling out of the courtroom parking lot in her lawyer's Mercedes like something out of the Dukes of Hazzard.

Mark was Caucasian and didn't really resemble anything big and black. But he forgot to wear that orange thingie hunters should-a-ought-a wear in the woods. So it was really all his fault.

The most bizarre element of this whole story was the testimony of family friend Ann White, whose husband had also been mistakenly shot in 1958 (for a porcupine or a gorilla or something). She claimed Mark Harshbarger had recently jacked up his insurance coverage and told Barry to look after his family if anything ever happened to him.

"That's just how responsible he was."

So tell me. Is Mary Beth Harshbarger equally responsible?
Posted by Margaret Gunning at 9:17 AM 3 comments: