An Ethiopian in the fuel supply 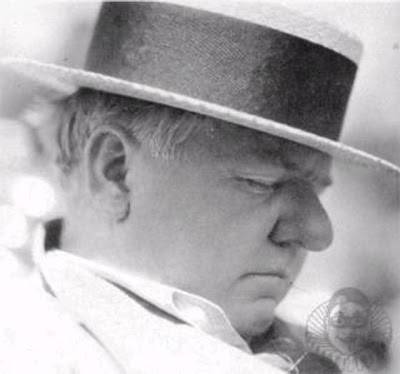 I don’t know what got me onto this. My Dad used to sit at the dinner table, soused, and monologue by the hour. As his captive audience, we were expected to listen. If we didn’t, we risked his wrath.

He kept talking about a comedian from the 1930s, his favourite, who spoke in a nasal drawl and made the English language do back-flips and double-twists. He was constantly hooking his top hat on his cane behind his head. He juggled. He had some negative traits that my Dad loved, and was known to mutter, “Can’t stand kids and dogs.”

Along with maxims like “never give a sucker an even break” and “you can’t cheat an honest man,” his legend included bizarre pool routines (in which the cue somehow ended up twisted like a corkscrew) and card games where he held five aces. But most of all, this man drank. And drank. Until at age 68, heart, liver, lungs and even mind gave way, and he died of rampant alcoholism.

W. C. Fields had a Dickensian childhood, which was perhaps why he was so superb at playing Wilkins Micawber in the movie version of David Copperfield. (I saw this just the other day on TCN. The potential for semi-dramatic acting in this role was almost heartbreaking. He could have been so much more than a crabby old drunk who knew how to juggle.) Fields ran away from his drunken lout of a father (do drunken louts run in families, I wonder?) at age eleven. Cadged his way through the slums of Philadelphia like the Artful Dodger, until one day when he attended a sleazy circus and saw someone throw so many balls in the air – and catch them – that they blurred together.

So the lad started practicing. First with two lemons, probably stolen. Then other fruits (casaba melons? Let’s not get too literal here). He would balance a large stick (like a pool cue) on the end of his toe, toss it up in the air, and attempt to catch it on his toe, raking his shins open in the process.

Oh all right, let’s skip all this garbage and go on to his spectacular career as a master juggler at the Ziegfeld Follies, where someone “discovered” him for the movies. His silents weren’t much, just displays of dexterity and tomfoolery. But in his first talkie, audiences sat up. No one had ever spoken like that before, and never would again.

Fields kept a mistress for fourteen years, one Carlotta Monti, a “dusky beauty” (in his words) whom he nicknamed Chinamen for her vivid style of dress. He was constantly derailing her infant career as a singer and actress, foreshadowing I Love Lucy by decades. Monti was as dependent on Fields as he was on her, but for different reasons.

She left behind a ghostwritten memoir which has no sense of her voice, but which is packed with anecdotes, some of which might even be true. This was later made into a movie with Rod Steiger and Valerie Perrine called W. C. Fields and Me.

I can only serve up a slice of Monti, before sharing my own rather eccentric Best of Fields list.:

“Woody (her name for him: rhymes with ‘moody’) didn’t drive too many women to distraction, but among those he did were the script girls – through his ad libbing. The script for one scene in Poppy called for him to say, ‘I will now play the Moonlight Sonata.’ It was a simple line, but, instead of delivering it, he mumbled, ‘I will now render the allegro movement from the Duggi Jig Schreckensnack opera of Gilka Kimmel, an opus Piptitone.’

The script girl gasped, and asked how to spell the words. Sutherland (the director) wanted an interpretation. Woody shrugged, and admitted, ‘I don’t know myself what it means. To tell you the truth, it just popped out. But leave it in, Eddie, it’s got a nice lilt to it.”

Eddie left it in.”

This man practiced a form of spontaneous, convoluted verbal jazz, almost impossible to reproduce here. One of the first Fields movies I ever saw was a little-known classic called Mississippi, ostensibly starring a very young Bing Crosby in magnificent voice. But Fields, as the riverboat captain, easily stole every scene he was in.

The movie not only included one of his best card game scenes ever (including the astonishing statement “the man who holds the first four aces wins”), but featured rambling, probably mostly improvised reminiscences about his youth as a dauntless Indian fighter.

“Grabbing my bowie knife, I cut a path through a solid wall of human flesh. . . dragging my canoe behind me!” In another version, he has “my canoe under one arm and a Rocky Mountain goat under the other.” By the end of the movie he’s scared to death by a cigar store Indian, and quickly recants: “I would no more think of harming a hair on a redskin’s head than sticking a fork in my mother’s back.”

My other favorite, which I watched on late-night TV in 1965, was The Big Broadcast of 1938, one of a series of mediocre, wildly popular “Big Broadcast” films. There was something of a Fields revival going on then, and I saw most of the better-known ones like The Bank Dick and My Little Chickadee (in which he and Mae West outdrawled each other). But there was something that grabbed me about this movie, in which Bob Hope played his first starring role as an insecure host on a cruise ship. Just witnessing Bob Hope fumble and fail, all his lame jokes falling flat, was gratifying enough, but he also sang Thanks for the Memory (NOT “memories”) with the delightful Shirley Ross (NOT DorothyLamour, who played one of his several ex-wives).

But Fields, oh, Fields! Before he lands on the deck of the ship in a flying golf cart, he plays a round in which the ball behaves like one of his juggled objects. When he pours sand out of his golf shoe at the end of the scene, various objects like live frogs drop out (“Hmmmm, so that's what happened to that tongue sandwich”). It’s the humming and muttering and fiddling and “drat”s and "Godfrey Daniels" that make this scene, and I swear I can’t begin to reproduce them. Then, delight of delights, he does his infamous poolroom scene, once again dominating a picture which has such dismal clangers as a performance of Wagner by Nazi sympathizer Kierstan Flagstad (wearing horns and a breastplate and brandishing a spear), and an awful love song called Don’t Tell a Secret to a Rose by a clearly-gay non-Latino called Tito Guizarre.

My brother, who was drunk at the time, came in halfway through the movie and we guffawed through the rest of it. I recorded the soundtrack on our old Webcor reel-to-reel with the five-pound microphone, and listened to it endlessly. I had become a Fields fan for life.

Then I promptly forgot all about him.

I started to think he was kind of offputting, which he was. I had read a couple of biographies, and his self-destructive drinking and the horrifying collapse of his once-athletic body at the end of his life was beyond disturbing. His “friends” sneaked alcohol into the sanitarium as he lay dying, hallucinating that vultures were coming to get him. Carlotta Monti, aware that the sound of rain was one of the only things that helped him sleep, stood outside his room with a hose and kept up a continual light patter on the roof.

So he died, passed into legend, and – what? What got me onto this bizarre topic? One day I tried to get a DVD of Mississippi, and found that it had disappeared. It was never shown on TV, perhaps due to cringe-inducing black stereotypes. After much sleuthing, I found a crummy bootleg copy on eBay. Someone must have held a movie camera in front of a TV or something. But it was barely watchable, and I began to understand my fascination.

This tough, lonely, cynical, oversensitive, supremely gifted man, this curmudgeon whose friends didn’t understand him but still loved him lavishly, was one of a kind. No one could have invented him: he would have been completely implausible. But my favourite thing about Fields is this: in Robert Lewis Taylor’s early Fields bio, he tells this heartwarming story.

“Many supporters of Chaplin have long resented Fields’ notoriety. Perhaps the best testimonial to Chaplin’s greatness is the fact that Fields was incapable of watching him perform for more than a few minutes. The virtuosity of the little fellow’s pantomime caused Fields to suffer horribly. One evening, a few years before Fields’ death, he was persuaded to attend a showing of early Chaplin two-reelers. At a point in the action where Chaplin suffocated a 300-pound villain by pulling a gas street lamp down over his head, the laughter rose in deafening crescendo, and Fields was heard to cough desperately.

‘Hot in here,’ he muttered to his companion, who was fortified against the cooling system with a heavy tweed jacket. ‘I need air.’ Fields left the theatre and waited outside in his Lincoln. Later, asked what he thought of Chaplin’s work, he said, ‘The son of a bitch is a ballet dancer.’

‘He’s the best ballet dancer that ever lived,’ said Fields, ‘and if I get a good chance I’ll kill him with my bare hands.”