But the greatest of these. . . 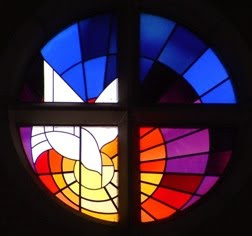 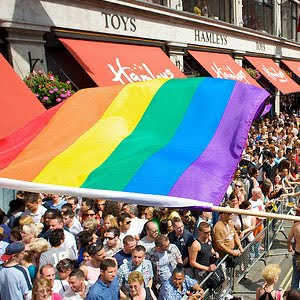 When 17-year-old Tory Inglis went to New Westminster's first Pride celebration last June, she was pretty excited about it.

It's not easy being a gay teenager. In spite of all the huge strides we've supposedly made in the realm of "tolerance" (and what does it mean when I "tolerate" you? It's a pretty stingy word), prejudice and even outright contempt lurk in hidden and not-so-hidden places. But Tory really wanted to go. An event such as this, vibrant and joyful, would boost the spirits of any young person who sometimes feels marginalized by who she is.

Tori's picture in the Vancouver Province newspaper reveals a shy-looking, serious young woman in dark-framed glasses, a girl who never thought she'd get into such dire trouble just for going to a parade. She hardly looks like a foaming radical, but rather someone who's quietly but fervently seeking authenticity in a world full of posturing.

Yes, Tory went to the Pride parade, and while she was there, someone snapped a picture of her with (the story says) "two gay men". And that would have been that, except for another truth about Tory: she has been a lifelong, active member of First Presbyterian Church, baptised and confirmed.

When the photo came out in the June 12 edition of the Royal City Record, it didn't just cause a stir.

It caused a storm.

There must have been much buzzing about this before Tory was called into the principal's office (so to speak). It was about a month after the photo appeared in the local paper that she was told to meet with the minister "and a female member of the church" (a buffer? The article doesn't say).

The response was predictable. Basically, Tory had her hand slapped. But it was worse than that. She was scolded for being a bad role model, for "promoting a sexual lifestyle".

She knew that, like most denominations, her church was against gay marriage, but she never expected to be told to step down as a junior youth leader. Tory sat and quietly wept during the disciplinary hearing (for that's what it was). Perhaps her tormentors felt this was a good thing, a sign of repentance.

The Province article states, "The minister told her the church would prefer if she withdraw from the group that organized the Pride events. But she refused and withdrew her membership from the church instead."

I have been through something like this in my own church, not over my sexual orientation but for my profound, disturbing doubts about leadership and the agenda we were expected to follow, especially in light of the fact that "our" church (unlike everyone else) claims to be gay-friendly and "even" ordains openly gay ministers, so long as they don't practice it beyond the bonds of monogamy.

Keep it quiet, boys and girls. No Pride parade photos, OK? If a United Church minister appeared on one of those floats, what would happen? Can you guess?

And dare I even mention the possibility that a minister might be furthering his own agenda, his need for public recognition: that he might have "issues" that he can only work out in front of the cameras on national television? Worse than that: why didn't anyone object to having these cameras filming the worship service, and why can't I even talk to anyone about it? And how about this: why is it OK and even "courageous" for him to do this, and not OK for Tory to be photographed at a parade?

"I see a lot of shallowness," a friend of mine said years ago. I have never seen such commitment and passion in a human being, but organized religion slowly and systematically snuffed it out.

Tory has fortunately received supportive calls from other church members, but the elders are adamant that she sinned in some fundamental way. Her mother commented, "I never thought they'd say she's not a good role model, because she is, and we've raised her to be that way. Our belief is that God created us to be who we are, and I've raised her to be true to who she is."

Imagine that. Another sinner! God created lesbians and gays? What sort of heresy is this?

What would Jesus say? Well. . . he didn't say anything at all about homosexuality, in spite of the fact that fundamentalists like to twist the gospel into something resembling a pretzel. As for marriage, he was sort of against it, telling people it might be better if they were celibate, though acknowledging that most people couldn't manage it.
If I may indulge in duelling Bible quotes, here's a pretty good one from 1st Corinthians: "Now to the unmarried and the widows I say: It is good for them to stay unmarried, as I am. But if they cannot control themselves, they should marry, for it is better to marry than to burn with passion." - J. Christ.
In being true to herself, Tory was forced to step down from a lifelong, cherished commitment. I can say to you now that this is about as painful as losing an arm. When you sever ties like that, you leave a huge chunk of yourself behind.

But if she stayed on, what would be the consequences? Whispered conversations, quickly hushed when she appears? Judgemental glances? Threats to leave if she stays?

One of the organizers of the Royal City Pride Society describes Tory as "intelligent, quiet and shy". Hardly the tattooed, pierced, raging radical we sometimes see on the news. This young woman quietly made a life-changing decision, choosing authenticity over phoniness, reality over posturing.

And she paid the price.

Tory made an incredible statement that made the hair on my arms stand up: "Above all, I want to promote peace and love and acceptance. And in a place that condemns people for loving, I would much rather be in a place that accepts people for who they are."

Heresy! Floats, drag queens, marching bands. People so "out" they're in your face. How dare she, a Christian church-goer, align herself with such destructive nonsense? How can any 17-year-old know she's gay, anyway? Isn't it just a phase, won't she come around if we just put her together with a nice young man in the youth group? Even if she is gay, can't she just get married anyway to avoid embarrassment (or at least keep quiet about it)?

These are the strictures of the past, and they carry forward in a distressing way. Every so often I think about returning to a church I attended for 15 years, but I find I just can't do it. There is an inauthenticity there that clangs like a cymbal, resounds like a hollow gong, and there isn't a single person I can talk to about it without the fear of being judged or even edged out.

"If I have the gift of prophecy and can fathom all mysteries and all knowledge, and if I have a faith that can move mountains, but have not love, I am nothing," a great writer once said.

"Love is patient, love is kind. It does not envy, it does not boast, it is not proud. It is not rude, it is not self-seeking, it is not easily angered, it keeps no record of wrongs. Love does not delight in evil but rejoices with the truth. It always protects, always trusts, always hopes, always perseveres. Love never fails."

That sounds like a pretty good desription of a courageous young woman named Tory Inglis.
Posted by Margaret Gunning at 8:16 AM 1 comment: