Contrary to past reports, there is indeed a secret video record of the death of Timothy Treadwell. It's so secret I'm posting it here right now.

Obviously, it was a mismatch, and the salmon inevitably went to Boo Boo the Bear.

The sillies who tread on the lines

OK, so the photo is faked. Or at least, it's not really Timothy Treadwell. 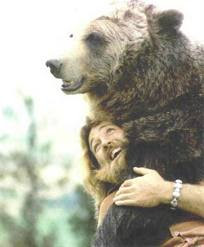 But it's a photo of someone, probably Grizzly Adams. This is a trained bear however, a professional bear, and the ones Treadwell hung out with were decidedly not.
His thrill came from getting as close as he could to the rogue animals, some of them huge, all of them unpredictable, in Katmai National Park in Alaska. I don't know where that is either, except to say (and this is truly incredible) that the slight, effeminate, and outright crazy-sounding Treadwell spent every summer with these bears for 13 years and never once came to harm.
That is. . .until one of them ate him alive.
I found a photo, perhaps spurious, called "Timothy Treadwell Autopsy," which is one of the most gruesome things I have ever seen. It shows a mangled human torso with no arms or head and one leg, bent at the knee and still wearing a shoe. This looked real enough that I think it was somebody who had been partially eaten by something, or otherwise badly mangled.
I saw the fascinatingly deadpan, almost tongue-in-cheek Werner Herzog documentary Grizzly Man a few years ago. It was spellbinding, but also very, very strange. Treadwell himself was an untreated bipolar and sober alcoholic/drug addict who claimed his passion for the bears had saved him from suicide. He was also a compulsive attention-seeker and failed actor whose angst and foolhardy impulses came across dramatically in his narration: using a tripod-mounted video camera, he recorded all the breathtaking sights and sounds of what he called the Grizzly Maze. Supposedly, he was compiling footage for a nature program (a la Crocodile Hunter) which never materialized, perhaps due to his insane habit of getting close enough to the massive, impersonally violent beasts to touch them on the nose.
He was lunch on legs, and he knew it, so that the end of the story was both horrible and inevitable. My somewhat morbid interest in Treadwell has recently been re-ignited by a fascinating 8-part TV documentary series called Grizzly Man Diaries. This program depicts the leisurely unfolding of daily life in the wild and features some of Treadwell's saner and more insightful commentary. I think it's far superior to Werner Herzog's fatalistic, wildly prejudiced production, with Herzog's funereal narration delivered with a completely emotionless, oppressive German accent.
Even the music on the TV series is evocative, with lazy, golden guitar chords illustrating those long afternoons running with the wild foxes, and dark cello music for the bears, shadow-shapes looming, massive and fundamentally threatening. Excerpts from his diary, read in a completely different kind of voice, are sometimes poignant and insightful. Someone has gone to great effort to present the saner and more poetic side of Treadwell.
The man who walked with the grizzlies was killed and partially eaten (along with his girl friend, likely functioning as a beard: Treadwell kept saying things like, boy it sure would be easier to be gay, oh yeah, you could just go to a truck stop for relief, too bad I'm not gay!, and shit like that) during his 13th season. He had stayed a little too late, the bears were extra hungry, and he was definitely pushing the envelope. Leaving food out in the open, not fencing off his camp, walking right up to the hulking beasts and talking to them in a high, silly, effeminate voice: these weren't the actions of a seasoned naturalist or even a hunter. They were, to be honest, the behaviour of a suicidal nut case who over and over again said he knew that the bears were eventually going to catch up with him and destroy him.
I don't think I could have coped with the real Treadwell. His "straight" life between bear seasons must have been pretty awful. He wrote a book and somehow wangled appearances on Letterman and elsewhere, but conservationists railed against him for his lunatic risks. He wasn't St. Francis of fucking Assisi, for God's sake, though he fancied himself to be the alpha male, the sheer force of his personality dominating even the massive, swaggering boars who could mount any female they wanted.
Something leaped into my head today, a verse by A. A. Milne, inventor of the world's most famous bear. It seems almost eerily appropriate.
Whenenever I walk in a London street,
I'm ever so careful to watch my feet;
And I keep in the squares,
And the masses of bears,
Who wait at the corners all ready to eat
The sillies who tread on the lines of the street
Go back to their lairs,
And I say to them, "Bears,
Just look how I'm walking in all the squares!"